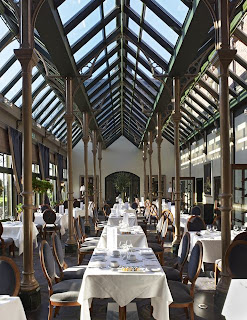 
They called themselves “Halls”, with pretensions of grandeur and fine living. The big houses of the Victorian rich are now open to all for weddings, banquets, and special occasions: no jeans allowed. We started at the bottom: Rockliffe Hall is as far south as our region gets, beyond Darlington.

I took Mrs Diner with me, for there’s no way she’d miss the cooking of our region’s culinary Wunderkind. Poached from his White Room at Seaham Hall, the winner of the BBC’s Great British Menu is now “Kenny Atkinson at The Orangery”. They’ve spent millions converting this Victorian gothic house into a five star leisure resort. You can spot the new extension: the bricks and tiles don’t match and the interior is like a Marriott. But then you don’t come here for the architecture or the décor. It has a fantastic golf course; and it has Kenny Atkinson.

I felt like a premiership footballer as we were escorted to the bar to be “introduced” to the maître d’, who introduced us to the bar staff, who then introduced us to a little plate of nuts and olives, before introducing another waiter bearing the menu “specially prepared by Chef Atkinson”.

“And is Chef Atkinson in the kitchen tonight?” I asked.

It really shouldn’t matter: Michelin inspectors visit unannounced midweek so they can check the standard when the chef is off doing more important things, like making television programmes. We were impressed that Atkinson was cooking on a quiet Tuesday.

Both the à la carte (3 courses for £47.50) and tasting menus (£67.50) were short, evidence of a quest for perfection and, though pricey for the North East, a bargain for fine dining. We chose black bream with mussels in curry sauce; duck, ham and smoked eel terrine; then beef fillet for her and halibut with wild garlic risotto for me. And we let the two sommeliers do the hard work: with each dish a different glass of their choosing.

The Orangery is a soulless Victorian greenhouse with a swirly carpet, a pianist in the corner and large paintings of fruit. It was brightened up no end by Robert, our entertaining waiter: service was immaculate.

A single amuse-bouche of pea soup with pancetta was exquisite. So were the breads: usually a sign that a good pastry chef is working backstage. My excellent terrine was dotted with surprises like marinated mushrooms and little cubes of sharp apples and celeriac. But Mrs D frowned: her curry sauce was fine but relentless, lacking something acidic to cut through the creaminess.

Things really went really awry at the main course. The beef was well past its medium-rare and the taste had evaporated with the overcooking: it was more Michelin tyre than Michelin star. Next to it lay a stringy beef “tart” wrapped in limp sliced potato. Meanwhile my halibut sat on a risotto so salty it took my breath away. Something was seriously amiss.

“Robert, you need to level with us. Are you sure Atkinson is in the kitchen?” 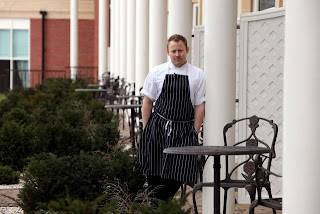 He shook his head apologetically. It was Chef’s night off. As Atkinson’s reputation grows, so will the demands on his time. He cannot hope to be taken seriously if the standard can’t hold for one night of absence. The mains simply weren’t up to scratch, even though the desserts were good (I particularly liked the blackcurrant doughnut) and the wine pairings spot on.