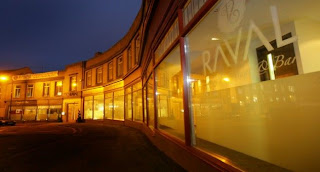 A nice bar to relax and read the menu, nice waitresses to deliver your 8% strength giant Cobra beers (or your gin and tonics): this is Indian Smart. 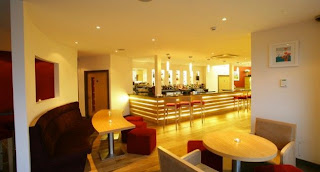 Raval calls itself a Luxury Restaurant and Bar, and I think that hits it about right. All warm and low lighting, it feels modern and lush. The menu offers us a “journey through a wide range of exotic flavours and subtle tastes”. It promised “Indian Fusion” and an “exclusive gourmet dining experience”. 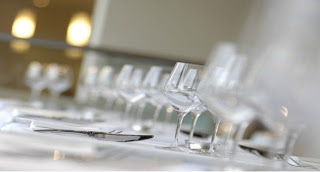 Although it’s in Gateshead, its advertising describes it as being in “NewcastleGateshead”, just like the Hilton next door. It’s just a poppadom’s throw from the Sage, at the Gateshead end of the Tyne Bridge and there’s ample parking outside: you’d think it would be packed every night. But when Mrs Diner and I paid a visit along with a couple of friends, we were the Solitary, as well as Secret, Diners. No-one had joined us by the time we left, well after midnight. That’s Tuesdays for you. 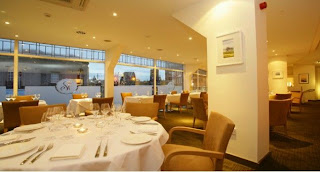 We immediately liked the design and atmosphere (as much as a completely empty restaurant could ever have atmosphere). The first thing that can be said about Raval is that, as curry houses go, it isn’t cheap.

That’s probably the last thing to be said about it, too, for starters range from £6 for baby dosa up to £13 for king prawns; mains are £14 for a single, small dish, with £6 for vegetable side dishes.

This had better be good, we thought. These are certainly luxury prices. Our dinner for 4 came to over £200, with two good bottles of wine. But then, we did order a feast.

It started well. As well as the Mini Masala Dosa, we ordered Dahi Golgappa (little puri with potatoes and chickpeas), tandoori marinated shredded chicken with chat masala, giant prawns with coconut and chilli, lamb chops all round, aubergine and potato fritters and, at the waiter’s insistence (which we regretted) we blew another £18 on a platter of rather ordinary tandoori tasters. 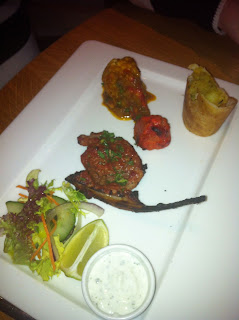 An elegant plate arrived with the dosa, cutlet and prawns: we could have been in a French restaurant. It looked very luxurious indeed and all three were delicious. Sadly the dosa, though properly filled, came without sambar or coconut chutney. This is like fried fish without the chips. The other starters were equally well presented, but not particularly special.

For main courses, we tried Murg Shimla Mircha – masala chicken with peppers, tomatoes and onions, and two classics: Goan prawn curry and the Saag Gosht. The former was too dry to be authentic, the lamb in the latter was rather tough. All three portions were not generous for £14.

Normally I don’t really focus on prices: but as Raval’s are so much higher than a normal Indian restaurant’s, we expected something truly special. It wasn’t. This was competent, reliable Indian cooking, but it was neither exceptional, nor, more importantly, did it come anywhere near their website’s promise of “Indian Fusion”. Unless the fusion in question was between an Indian restaurant and an expensive restaurant. Sadly, we could detect no other influences.

Email ThisBlogThis!Share to TwitterShare to FacebookShare to Pinterest
Location: Gateshead, Tyne and Wear NE8 2AT, UK