Six, at the top of the BALTIC, is on the sixth floor (of course).  I’ve avoided reviewing this place for quite a while, largely because I didn’t want to be disappointed again.

Since the Baltic first opened I’ve sampled a number of its sixth-floor dining incarnations: from overpriced gourmet pretension, to breezy but irritatingly unreliable bistro. On the last two visits I had nice starters, an amazing pud (knickerbocker glory with Pimms jelly), but very dull mains.

I’m happy to say that Six has changed for the better.
It has a charming and efficient general manager called Matthew Robertson, and has secured Adam Hegarty, former protégé of Terry Laybourne’s Café 21, who at last appears to have combined stability with imagination in the kitchen.

We started with three-cheese soufflé (fluffy and tasty, but toughened by too much salamander and floating on a bland cream, not cheesy, sauce) and sweetly glazed mackerel fillets with wasabi foam, nicely pickled mooli radish and cubes of chinese pear. The foam could have been spicier, and apple might have been sharper than pear, but the whole was fresh and interesting.

Then Mrs Diner had cod with fabulous mussels, chive cream, and saffron mash, while I had a concoction worthy of the Turner Prize itself: halibut with red wine sauce, salsify and oxtail. This looked like an unmade bed, but tasted delicious, even though my fish was a touch dry. The kale was inedibly tough, but the beetroot was good. Everything was locally sourced and fresh. 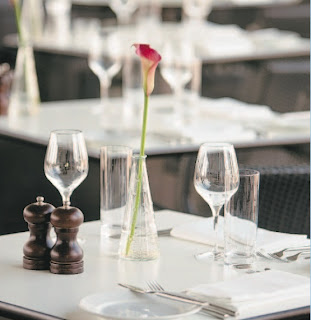 I don’t think Six is aiming for gourmet status – the menu is far too large, so results are inevitably going to be mixed. But it’s creative and ambitious, so it works well at the top of an art gallery. It has already attracted a mature clientele: what a pity to subject them to terrible piped pop music. It doesn’t help the noisy, rather impersonal ambience.

The two best places to see the view are the tiny bar behind the lift shaft, and the loos. Six has the most panoramic toilets in Britain: now I can recommend the food as well.