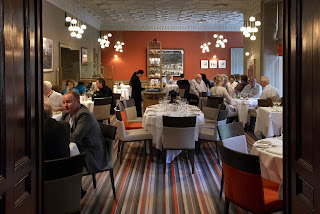 Years before I went underground, I endured an underwhelming tasting menu at Jesmond Dene House Hotel. It was overpriced and overblown.

I don’t think Michael Penaluna was in the kitchen back then. He earned his spurs as the understudy of Pierre Rigothier, the chef who brought this restaurant back on track after a period of pretension. When Mr Rogothier went off to Paris to work in a Michelin-starred establishment, instead of hiring from outside, the management promoted Michael. What a good decision that was.

In 2011 this was my restaurant of the year. Since then, it has demonstrated consistent, imaginative cooking. Now Mr Penaluna has taken the plunge and is offering Tyneside’s only tasting menu: 10 courses for £75, or £115 with wine pairing. It’s a brave venture, and he was confident enough to invite the Secret Diner to sample it.

Now I want to be straight with my regular readers: this meal cost me not a jot. I broke my cardinal rule of not accepting a restaurant’s hospitality, for this invitation was too good to refuse.

Nevertheless, Mrs Diner and I went in secret, on a day of our own choosing, and didn’t reveal ourselves until the very end of the meal. We also happened to choose a night when the restaurant was packed.

This is not a menu to be undertaken lightly. We sat down shortly after 7, and didn’t leave until 10.30. It’s a gastronomic marathon: The Great North Eat.

Three appetisers arrived together: a crispy piece of rabbit belly, a tiny glass of salt cod brandade, with liquid pea and grains of salt and vinegar rice, next to a glass holding a single oyster from Lindisfarne, fresh as a rock pool, with a foam of lavender and apple. A spectacularly good start with a glass of dry champagne.

Then came some live theatre: a sealed dome of smoke containing a spoonful of black garlic purée, around which was poured smoked cauliflower and wild garlic soup. This was delicious – the fermented black garlic was sweet and tart, like balsamic with tamarind, and sprinkled with purple dried chive flowers.

This dish needed a sharp wine to cut through the smoke, and the young, passionate sommelier, Danny Diver, cleverly chose a dry Riesling from Pfalz.

All the wines were by-the-glass offerings on the main list, and Danny’s next choice was more mellow – a Grüner-Veltliner, not from Austria but from New Zealand, which, when it’s not doing Sauvignon Blanc and Chardonnay, has a perfect climate for Germanic grapes.

This was peachy, with a distant hint of orange, cleverly matched to a tiny sprinkling of dried orange zest that sat next to a sweet langoustine on top of an almost liquid black pudding, a pearl of a grelot onion, and a few crushed coriander seeds. This was classy cooking, and all the more impressive as it was achieved while the same kitchen was pouring trayfuls of regular orders into the busy restaurant.

Space doesn’t permit a description of every dish and glass. There were winners, like mackerel on a bed of creamy crab, its oiliness diffused by gooseberry coulis and white Burgundy, and there was the occasional also-ran. An inspired rack of rabbit, its tiny rib cage lying quietly next to a bed of carrot, was annoyingly paired with a roll of smooth foie gras. I guess the richness was designed to contrast with the simple rabbit, but I’d have preferred something earthier.

I particularly enjoyed the spit-roasted spring lamb with its spoonful of moist shredded shoulder, like a chutney on the side, accompanied by a muscular Malbec.

Desserts were first class: vanilla parfait with rhubarb, and lemon meringue pie, paired with a honey mascato passito from the Veneto. Danny the sommelier insisted on adding a glass of Rutherglen muscat to accompany some rich chocolate gateaux.

The entire menu was seasonal and local. One of its unsung stars was Ken Holland, whose kitchen garden at Vallum Farm had been plundered for its most interesting shoots.

And speaking of stars: no, your eyes do not deceive you. I have awarded this meal six out of five, a Secret Diner first. Mr Penaluna should take this extra star as an advance for the one I expect him to receive sometime soon from another restaurant inspector.

But a gentle warning: the Michelin people often visit on Mondays, which is his day off. If the brigade can show consistency, an entry in next year’s guide would be a just reward for my best meal so far this year.