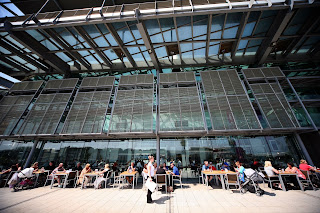 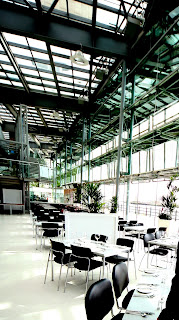 I’ll say one thing for it: this café-restaurant has a very persuasive PR.

Recently I’ve been bombarded with invitations to visit the National Glass Centre in Sunderland. It reopened last week after a £2million refurbishment, and now they want to encourage visitors by offering better food. They’ve brought in the people that run the catering at Sunderland Association Football Club, and they’ve hired a very good PR team.

“Fine daytime dining comes to the North East”, proclaimed the first press release. Intrigued, I resolved to let the place bed down and then pop along for lunch. 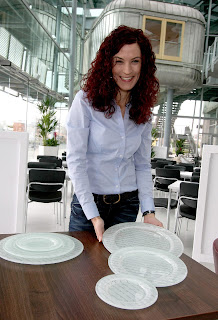 Then another email arrived telling me about the crockery. They’d commissioned one of the Glass Centre artists, Katya Filmus, to create some plates. Come along and try the food served on the “stunning plates”.

I put a tentative date in the diary. 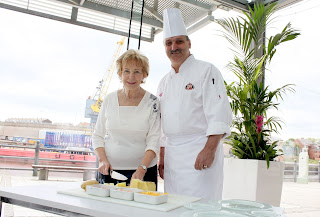 Yet another press release appeared: a lady called Rona Williamson from Thornhill had won a competition to design a signature dish: “When The Boat Comes In” fish pie.

It’s a big space, with over 100 covers. I went on a very hot day and the place was packed – there were tables outside by the river as well as in the big, light atrium. Despite being only a week old, service was efficient and smooth. It had bedded down well.

What’s less secure, though, is the menu. Lunch is served from 11.30 to 2.30, however something mysteriously called The Looking Glass, which has a list of lunch specials, is only served from 11.30 to 1.30pm. So lunch is served until 2.30pm, but the specials are only available until 1.30pm? This was all too bewildering for a mere food critic to understand. Maybe they’ll send me a press release to explain it.

According to the Glass Centre’s website (which, incidentally, doesn’t include the address – I guess you have to know where it is, or follow the brown signs around Sunderland), they also serve breakfast from 10 to 11.30am. This offers waffles, pancakes and eggs benedict, but, curiously, no bacon and eggs. Breakfast for fine diners only, then.

The lunch menu is littered with tricksy names like Daily Glass specials, Gather and Graze (antipasti platter to you and me, with some rather uninspiring-looking cold meats), Leaves and Greens, which is also called the National Glass Centre seasonal salad (in reality, salad frisée) and the National Glass Centre club sandwich (presumably to make clear they weren’t offering the Tate Gallery club sandwich instead). All this just makes this menu look rather cheap, as well as confusing. I like a place that calls a salad a salad.

My friend started with goat’s cheese while I had sautéed mushrooms. The cheese was spicy and good, but came on penne rather than a proper salad and arrived in an ordinary bowl. My friend eyed my plate jealously: I had Katya’s special edition. It’s a very nice plate, with historical glass references on it. I couldn’t read them without first eating my mushrooms, which were creamy and mustardy, piled high on a slice of toasted brioche. 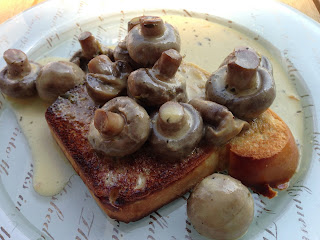 We had glasses of good house wine served in nice big glasses. But oh, what a terrible own goal for the Sunderland AFC catering team: what is Italian Bormioli glassware doing in our National Glass Centre? Surely they should be using Dartington crystal?

Then I had fish pie and my friend tried chicken with dauphinoise potato. The chicken was so dry, it could have been served at a hotel banquet. No wonder they wouldn’t offer it after 1.30pm – it must have been hanging around all morning. But the potato was good, with a hint of nutmeg.


The fish pie (sorry if it was yours, Rona – they didn’t say) was bland, with no interest, other than a little wilted spinach at the bottom. Both mains came with winter vegetables, which are completely inappropriate for this season.

Desserts were more interesting: I had strawberry crumble, and my friend ordered cranachan. The crumble was actually apple with strawberry and very good, though it came with brown ale ice cream instead of vanilla.

Not as bizarre my friend’s dessert, though. Cranachan is oatmeal soaked in whisky, with whipped cream and fresh raspberries – Scottish Eton Mess. That was also how our waitress described it. What arrived was a slice of sponge cake.

“We ordered cranachan”, I told the manager. She claimed that it was.

“So where is the whisky?”

“We can’t put whisky in because of the children”.

It was no more cranachan than this brasserie is fine dining. But it’s a good place for a quick lunch in Sunderland, and some of the plates are lovely.