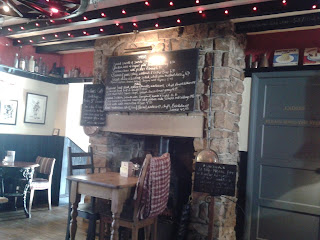 Recently a lady called NickyB posted a comment on this site that I had overlooked The Rat Inn in Anick, a tiny hamlet near Hexham.

Under the ownership of Karen Errington and Phil Mason, the place has reputedly blossomed from pub to gastropub. Nicky reckons it’s just as good as David Kennedy at Vallum. This clearly needed a proper test, so I sent in the ladies who lunch.


I wouldn’t normally devolve responsibility – my previous reviews have been based on personal taste and experience. But in this case, Mrs Diner wanted to go somewhere nice with some girl friends, (I suspect she was desperate to have some respite from me).

It just so happened that the four friends who accompanied her are remarkably well qualified to be food critics. They are:
Not even Masterchef could boast more expert judges. Here, then, is the collective judgment of Mrs Diner and the Dinettes.

There was widespread praise for the location and the ambience: “it has a wonderful view of the Tyne Valley... a very pleasant country pub full of paraphernalia and quite charming,… wool throws on the back of the dining chairs, pine scrubbed tables... just the right amount of rustic chic without being stuffy or old.”

Our celebrity-watching ladies spotted Terry Laybourne and his wife sitting at another table, which, they reckoned, augured a good meal.

The menu is chalked up on blackboards, but “don't sit under the table where it hangs as we all had to crowd round the poor people dining underneath it.”

One of the dinettes had a gluten allergy, but was delighted to see gluten-free bread available. She was “speedily talked through what I could and couldn't have and it didn't present a problem to have the pan fried plaice fried without breadcrumbs.”

The wine list was wide-ranging and there were “plenty of good local ales and wines by the glass.”

Craster kipper pate had “just the right amount of lemon”.


Baked camembert and walnuts with Lindisfarne Mead was “exactly as described…drizzled with mead, which gave a nice sweet twist.” It was “very nice, but not fantastic”.

Gazpacho was “garlicky…refreshing and light”.


One dish engendered universal praise: a crispy coated Duck egg on top of pulled ham hock on a bed of lettuce with fresh peas was “delicious, definitely the best starter of the day”.

The ladies sampled a range of main courses, though not the restaurant’s signature dish – Roast Northumbria rib of beef (for two) for £45.00. Apparently they’ve sold 324 ribs this year so far, “testament to the North’s love affair with great ingredients”. Or to Northumbrians’ waistlines, more like.

Instead, one Dinette had peppered rump steak, “perfectly cooked, very smooth sauce” with roasted tomatoes, watercress and “delicious” chips, while the others ate lighter. Grilled mackerel with confit of tomatoes was “nicely presented, with well-seasoned tomatoes and peppery sauté potatoes…the mackerel was a bit on the small side, though”.


“The sauce was like something on a children’s menu – a sharper cheese would have made it a bit more grown up, but the veg was fresh and on a hot day was a nice departure from the heavier dishes”.

One big letdown was the plaice: it was “woolly”. This from someone who definitely knows her fish.

The puddings were not recommended. Ginger sponge was “well cooked”, but “unremarkable”, and chocolate and summer fruit sundae was “a disappointing mix of store cupboard ingredients with ordinary vanilla ice cream – something even my husband could have made.”

As another Dinette put it: “Noone at the table seemed to be having that orgasmic feeling one gets when tucking into a sinful and scrumptious dessert.”

Mrs Diner and the Dinettes really enjoyed their experience, which cost £28 a head. The service was “top notch”, the owners “attentive…great”.

In short, “a thoroughly well-run pub with a lot of excellent cooking…I would recommend it to anyone.”

And they all agreed with the verdict – 4 stars.