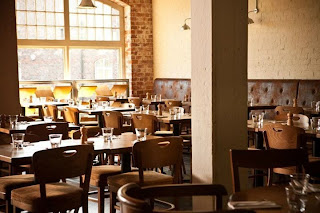 [IRVIN'S BRASSERIE CLOSED DOWN IN JULY 2017] 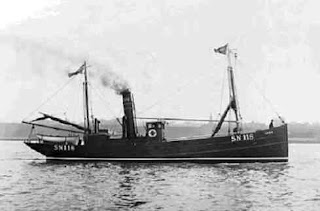 Richard Irvin was a fishing pioneer. His steam-powered trawlers were the envy of the world’s fleets, and a century ago he had more than 90 boats, with smart headquarters on the fish quay in North Shields.

The building is still there: R. Irvin & Sons Ltd. But now it’s a spacious, laid-back brasserie.

The building sits rather uncomfortably in tatty surroundings. I know the fish quay has been improved a bit over the years, but it’s a missed opportunity for the north east. A straggly row of pubs and restaurants, many offering cheap Italian meal deals, and a couple of fish and chip shops scarcely makes it a tourist destination.


Anyone who’s visited Fisherman’s Wharf in San Francisco can see what could be made of an old quayside with some money and imagination. Even without the Golden Gate Bridge, the view from North Shields quayside is pretty inspiring, with huge ships being towed to sea, and the constant movement of the river.

It needs some proper shops, a permanent market, boutiques, coffee houses and galleries. It needs young people handing out samples of clam chowder. In short, it needs a council with some guts and imagination to properly transform the area.

Diners arriving at Irvin’s instinctively head for the brighter tables by the window. That’s a mistake. They’ll be rewarded with a view of a grubby pub car park. A sign hangs limply over the New Dolphin declaring, “New management, all welcome.” The pub was locked up long ago leaving behind a pile of litter and an old tyre – that’s the outlook from Irvin’s.

A better spot is near the pass. It’s one of those big open kitchens, where you can see the sweat on the chefs’ brows. 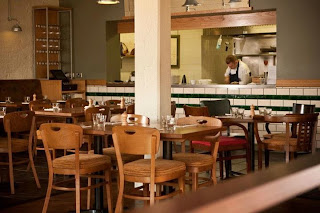 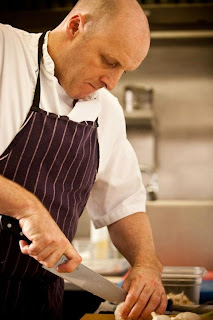 There was plenty of sweat the night we went. Graeme Cuthell and his team must have miscalculated the demand on a warm summer’s evening. Even thought the restaurant was less than half full, and we arrived early, it took over two and a half hours to serve three courses – a poor performance by any standard.

Fortunately, what eventually arrived was good. The menu is divided into Meat, Fish and Veg, with starters and mains lumped together in each category. I quite like this idea. Although, as you might expect, the sea is the star, there are also plenty of interesting meat dishes, like acorn-fed pork steaks, calves liver with polenta, and saddle and shoulder of spring lamb.

I wanted to try razor clams, there was a duck salad that looked good, and I also fancied the mussel chowder. But there were just two of us, so to start Mrs Diner ordered Caesar salad (which sat in the fish list, so we assumed the anchovies would be special), and I selected pig’s cheeks.

The anchovies were indeed special – big white fleshy specimens. They needed more dressing, and the dressing needed more garlic. I prefer Caesar salad with full-blown romaine leaves, rather than silly little bits of baby gem. But the pig’s cheeks were tender, and came with aromatic carrot and cumin puree and nicely sticky Vichy carrots. Perhaps this was a dish for a cold Autumn day, but it was a tasty start.

Now wild turbot is my favourite fish. I think Mrs Diner ordered it first to rile me; I couldn’t have the same as her, so I chose cod. The turbot sat on spinach, with good parmentier potatoes, and some little wild mushrooms. This was a nice idea: turbot and mushroom combine well, especially if there’s a hint of truffle about. But, though the turbot was baked perfectly, the mushrooms were bland and fried to a chewy crisp. At £19.50 for the dish, they should have got this right.

The grilled cod was much better: it sat on creamy savoy cabbage with carrot, dotted with excellent chorizo. We also had thin fries and broccoli with a squirt of hollandaise. We asked for more sauce but they brought béarnaise instead. 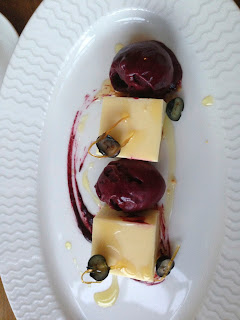 My dessert was a set lemon cream (like jellied pannacotta) and smooth blueberry ice cream, garnished with confited lemon zest.

The wine list is as interesting as the food: we had a bottle of Tinpot Hut pinot gris, which contributed to a £110 bill for two with service.