Adam Reid at The French 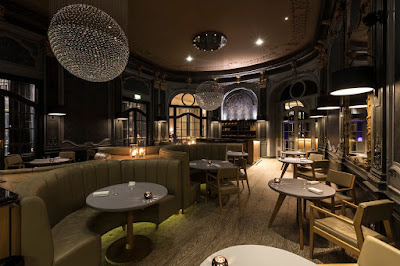 In the unlikely event that I ever gain an entry in Who’s Who, I’m pretty certain that my list of recreations would include long lunches and sleeping. In my case, there’s a direct correlation between the two. My lunch heaven demands a couple of spare hours and more than a couple of glasses of good wine, after which I am invariably rewarded with the sleep of the dead.

If you’re in based in Newcastle, my nearest 6-star favourite lunch can be found at The Raby Hunt, where the 5-course tasting menu is a bargain £35 (£55 in the evening, or the full version is £80). As an lunch outing it requires a half-hour train journey to Darlington and a short taxi ride to the restaurant, although you may need someone to wake you up in Newcastle on the way back, or you could easily find yourself in Berwick.

Alternatively, if money is no obstacle, you can take the morning flight from Newcastle airport and arrive in Paris just as Chef Alain Passard, still in his jeans and casual shirt, is opening up his restaurant Arpège.

Last time we were there, Mrs Diner and I were first to arrive and last to leave. We were still ploughing through his dessert tasting as the first evening diners arrived. We had to make a dash for Charles de Gaulle to catch the last flight home, and the damage to the wallet lasted quite a while. But I still smile to think of his witty and flawless interpretations of simple fresh vegetables.

It’s easier to get to Paris for lunch than it is to Manchester. If the Government really wants to make the North an economic powerhouse, it has to start with the institution ironically called Trans-Pennine Express. ‘Express’ is presumably used in the way the French apply it to their catering: it indicates cheap and nasty. It is also painfully slow and notoriously unreliable. But there’s sunshine at the end of the Pennine tunnel. It’s called The French.

This restaurant sits just a few minutes’ walk from Manchester Piccadilly station. The Midland hotel is a Manchester institution, the place where Mr Rolls first met Mr Royce. The French, its signature restaurant, won a star in the first British Michelin guide in 1974. The Beatles were famously refused entry for being “inappropriately dressed”. 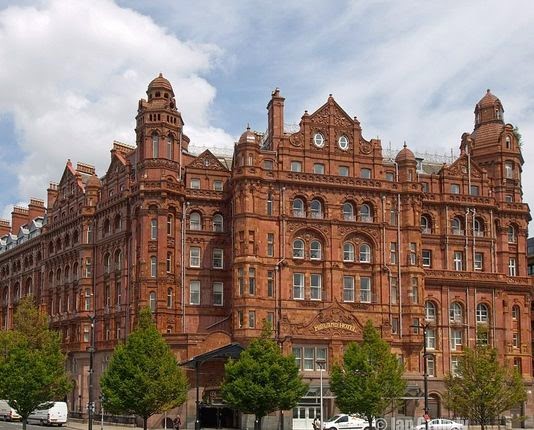 After years of decay, and a sad, inauspicious period as a Crowne Plaza, The Midland was restored to its former glory (well, they've kept the architecture and added modern furnishings), and in 2013 The French was relaunched, to huge publicity and quite a bit of national acclaim, by wonder chef Simon Rogan. His L’enclume in Cartmel, Cumbria, is probably Britain’s best restaurant, and The French has brought Rogan’s genius to Manchester, via the passion of head chef Adam Reid. 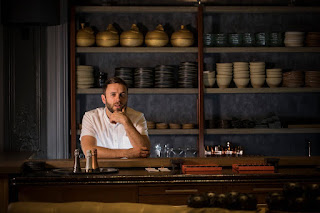 [Note: since this review was written, Adam Reid has become the owner/chef here and the place has been renamed 'Adam Reid at The French'.  He deserves it.]

I braved the train, and went for lunch with a friend.

Now call me old-fashioned, but at first I was rather disappointed by the setting. This ornate, mirrored room, which is surprisingly small, stands just off the main hotel reception. 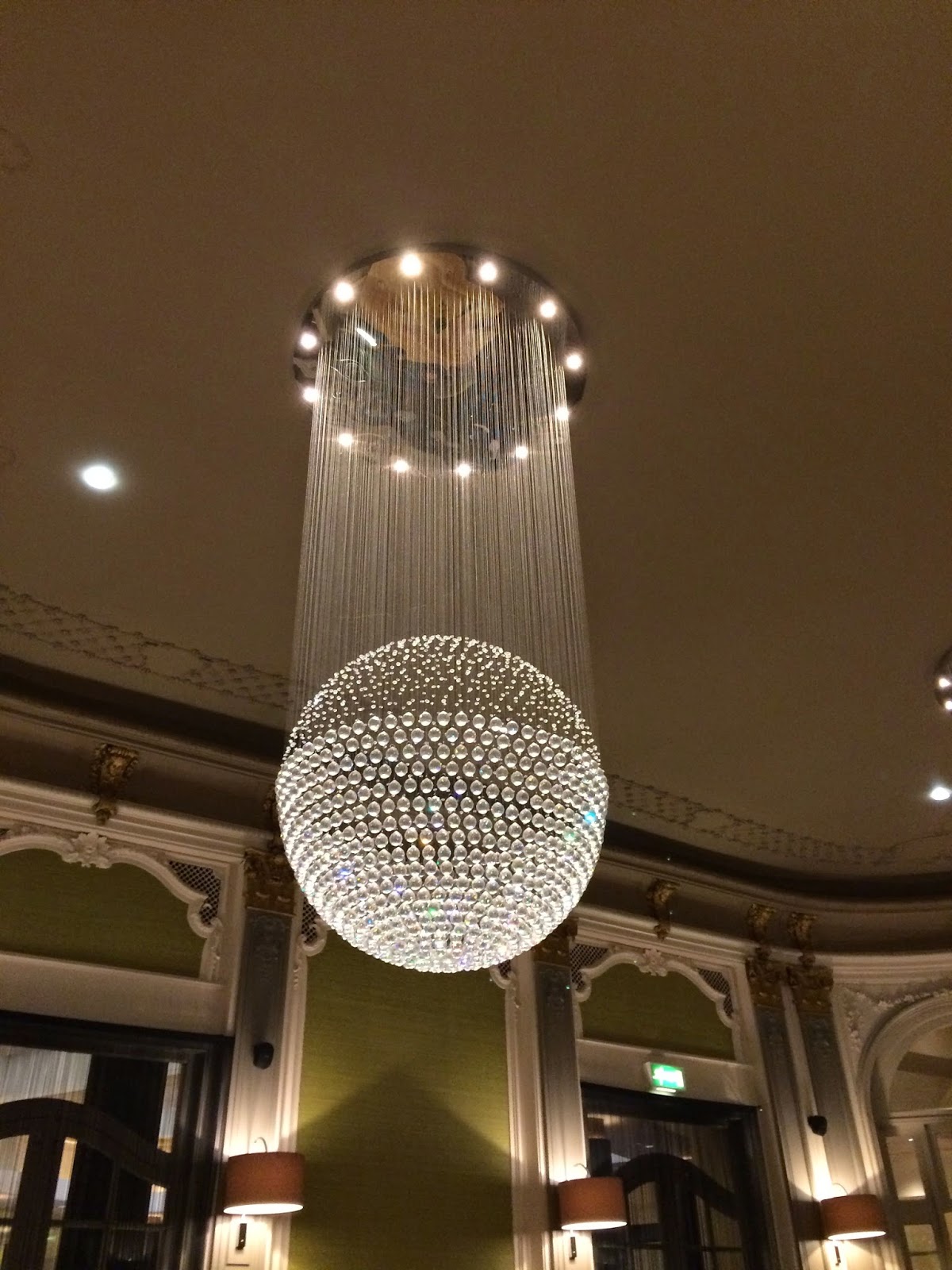 Its rich grandeur has been softened by light (and not terribly elegant) Scandinavian furniture, pastel walls and huge camp chandeliers. It reminded me of those restaurants in American casinos, partitioned off from the slot machines, but with the buzz of guests always nearby. It feels more pop-up than permanent.

The Beatles could have sneaked in with flared jeans and Ban-The-Bomb t-shirts and noone would have batted an eyelid. 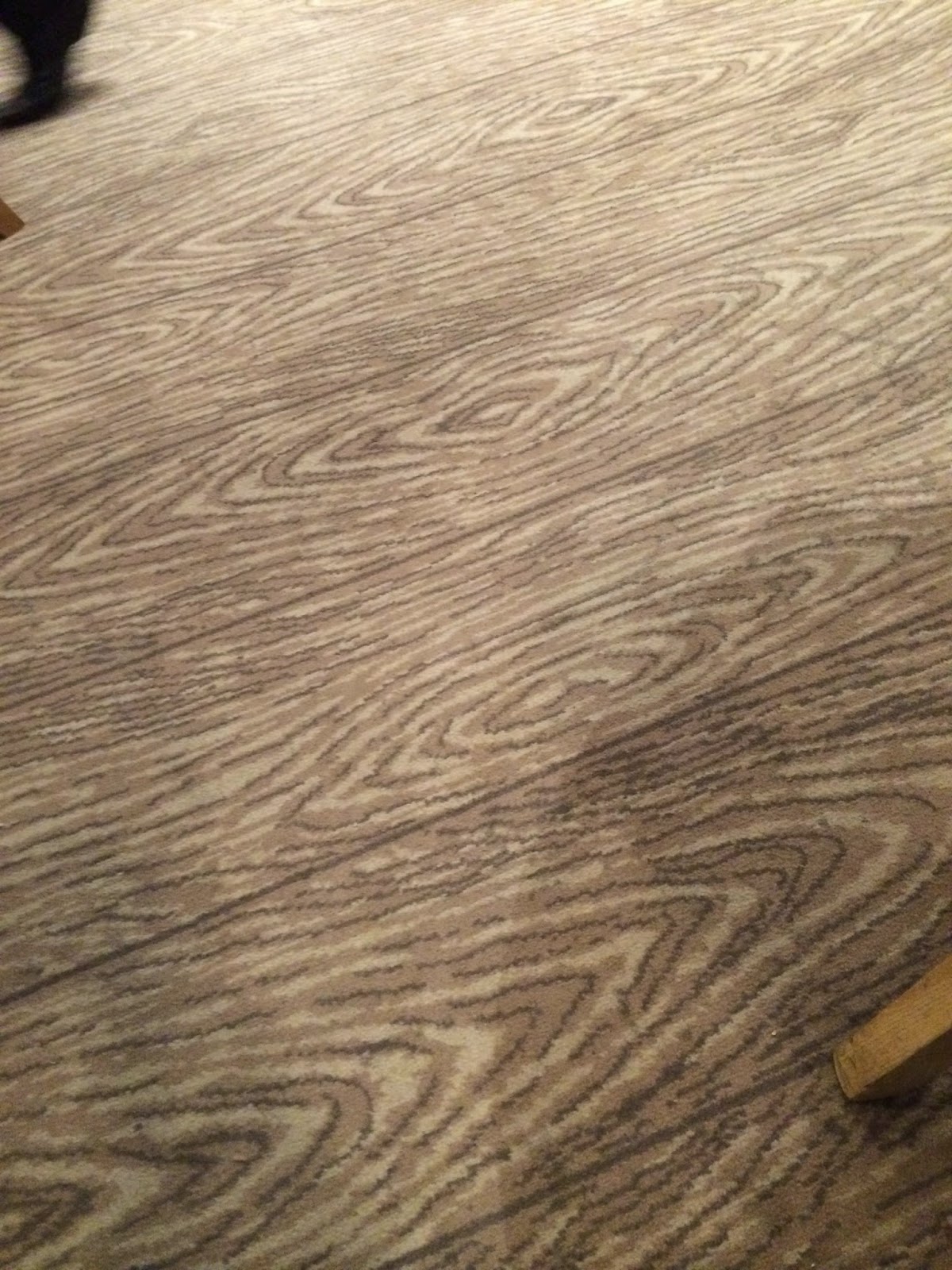 Even the floor could be Norwegian Wood – except it’s not, it’s deep carpet woven to look like Scandinavian timber.

In fact, at first we didn’t even glance at the list – surprise is the whole point of a tasting menu, after all – then I remembered that my friend doesn’t eat pork or shellfish. Oh dear, this was a catastrophe: the menu we'd chosen had trotters, ham fat, oysters, abalone, shrimp, bacon, suckling pig – there was something forbidden in almost every course. 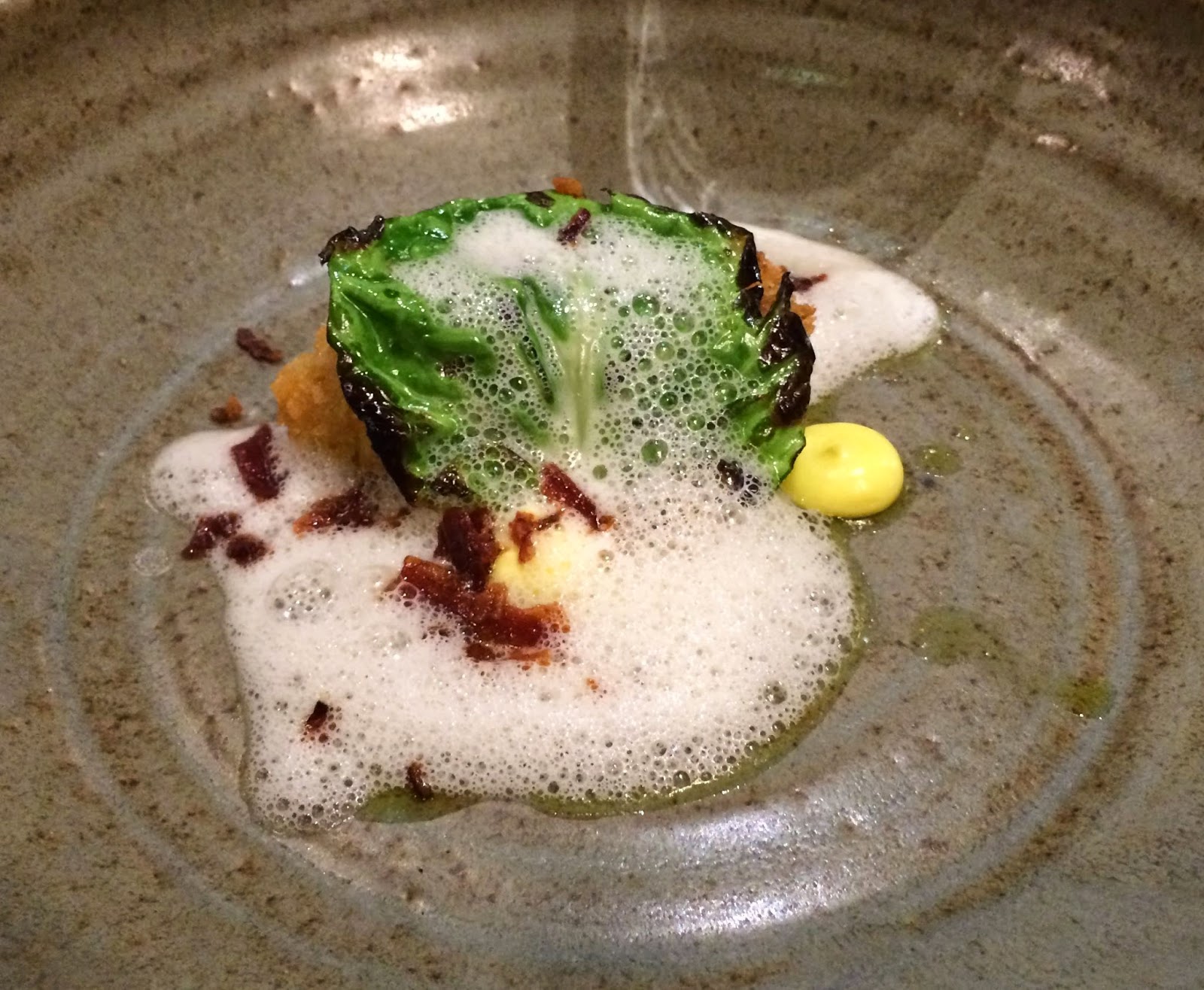 With trepidation we beckoned the waitress. She didn’t blink. No question of ‘I’ll talk to the chef’. This was absolutely not a problem at all, Sir. 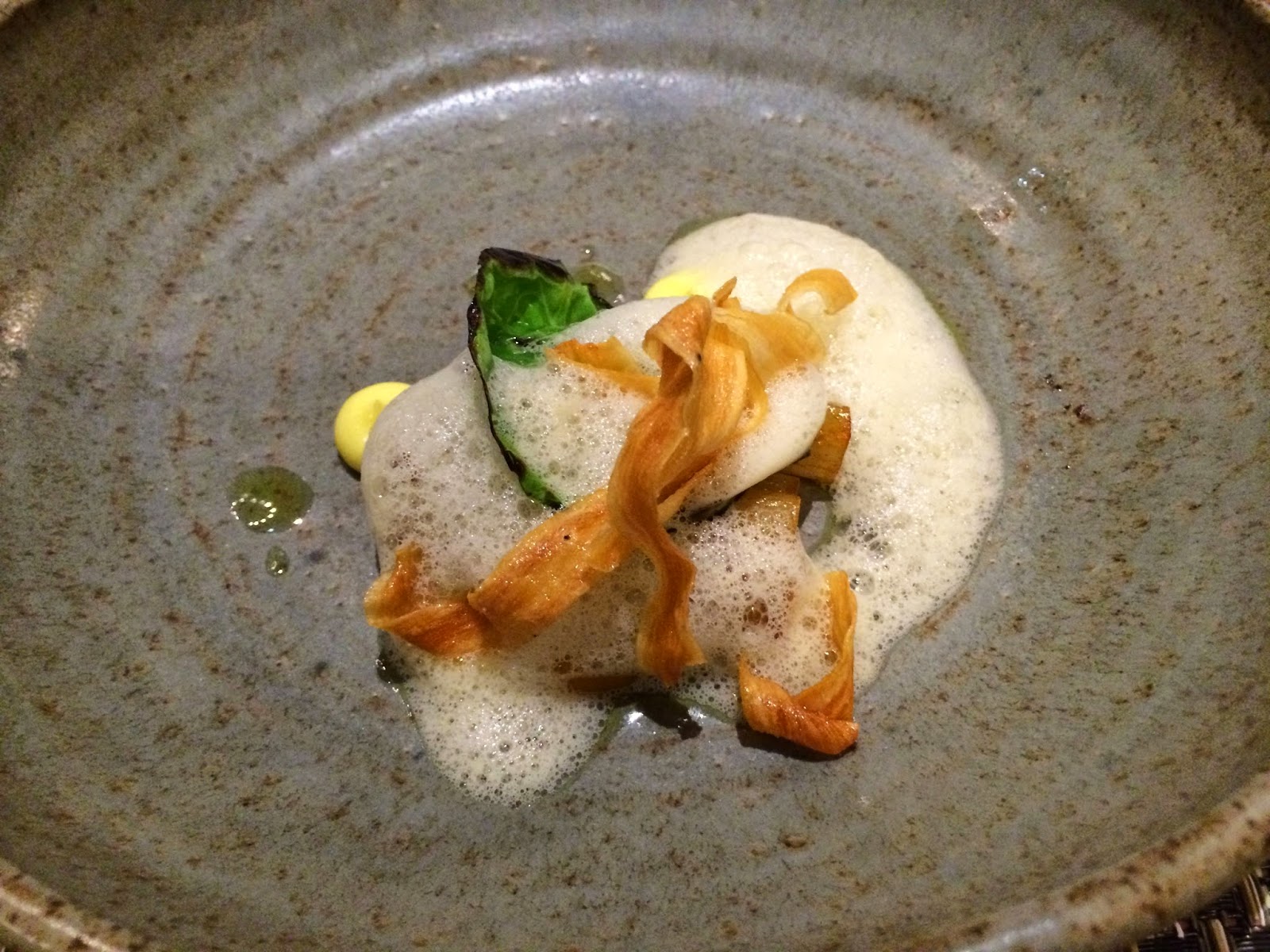 And the meal arrived quickly and perfectly paired: pork replaced with chicken, bacon with parsnip, shellfish with the most ornate vegetable creations. 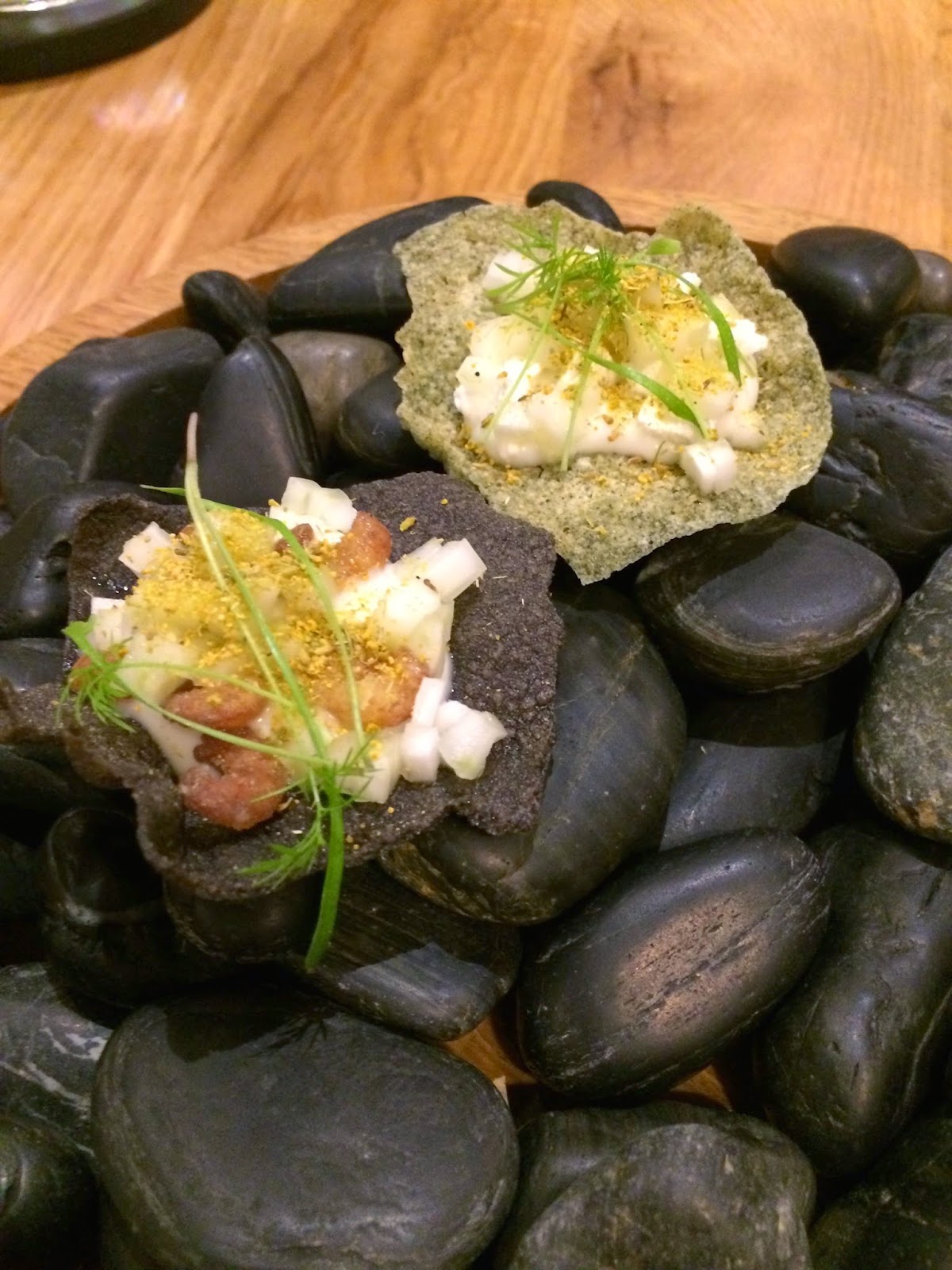 The cooking was modern, surprising, layered, balanced, with inspired pairings, and stunning technique. How this place didn’t achieve a Michelin star last year is beyond me. I’ve heard on the foodie grapevine that the editor of the Michelin guide has a downer on new restaurants that only offer tasting menus (Kenny Atkinson take note). She needs to think again. This is by far the best restaurant in Manchester.

I won't recite each dish: Adam Reid will have changed the menu completely by the time you visit, for this meal was entirely seasonal, mostly local, and utterly delicious. 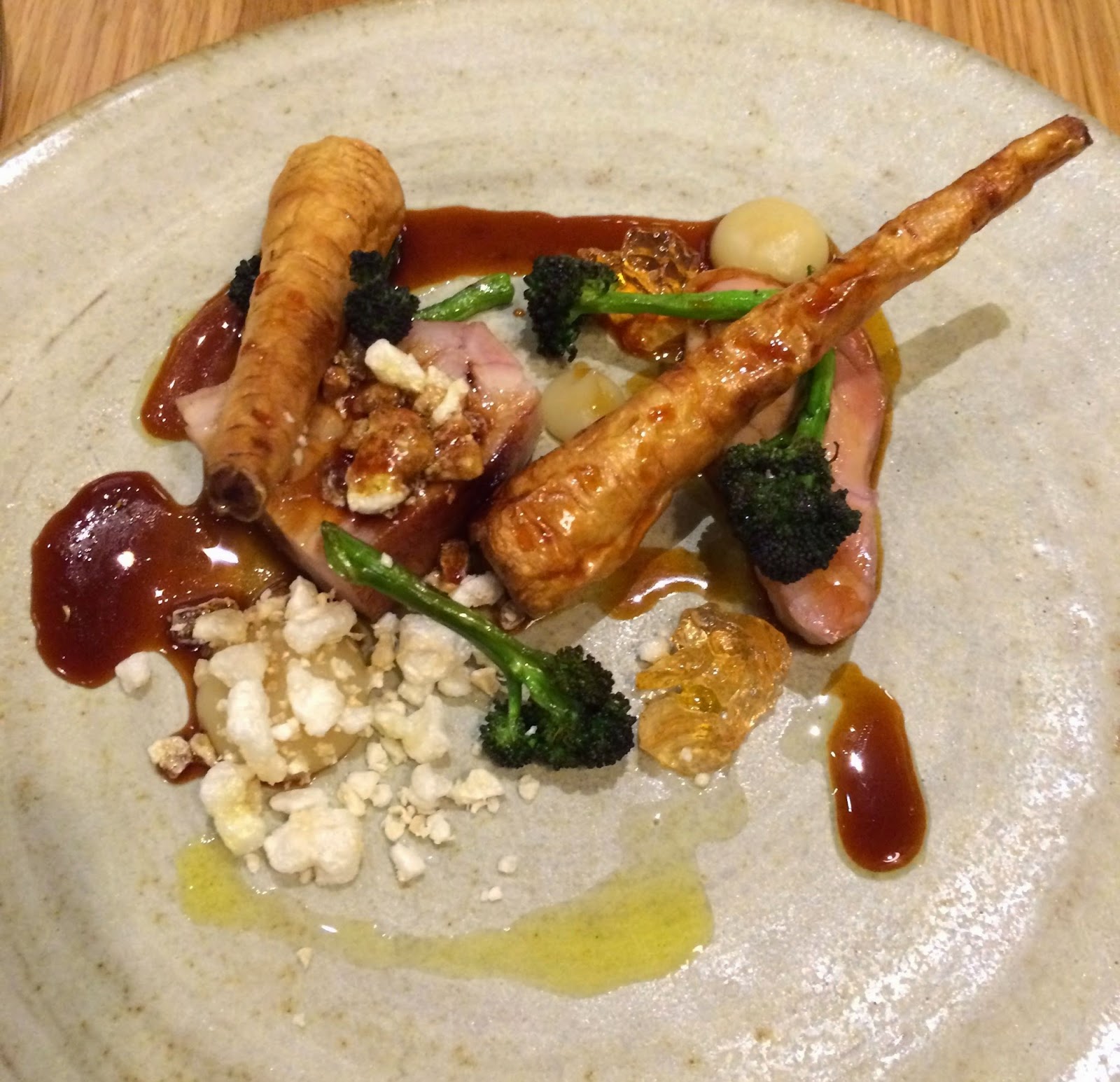 From the crispy mackerel with celery appetiser to the salt-baked abalone, complementing but not overpowering the buttery hake, from the pork with crab apple, cider and the thinnest of allium, to the oyster with butternut squash, buttermilk and mint, this meal was full of invention. 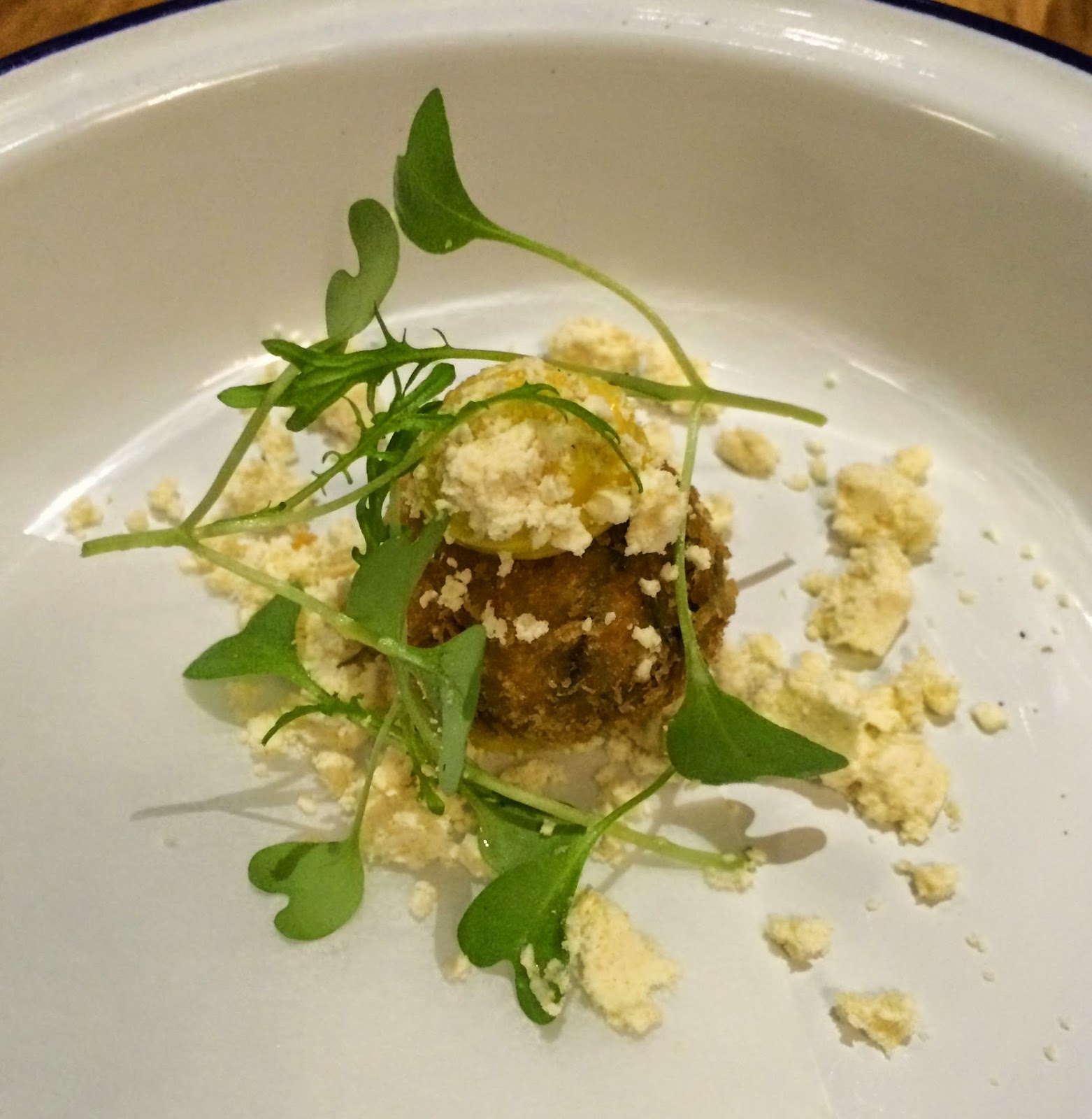 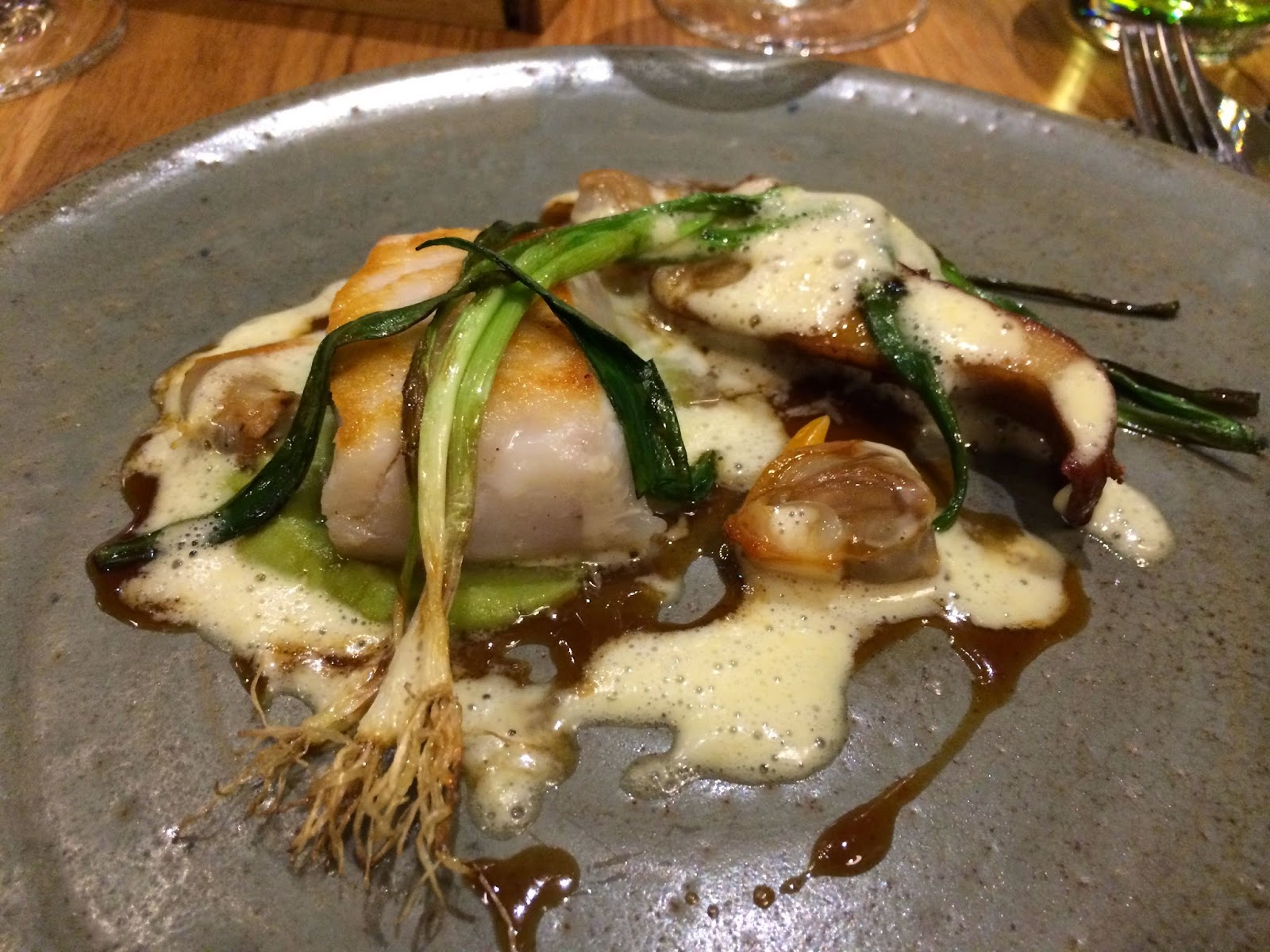 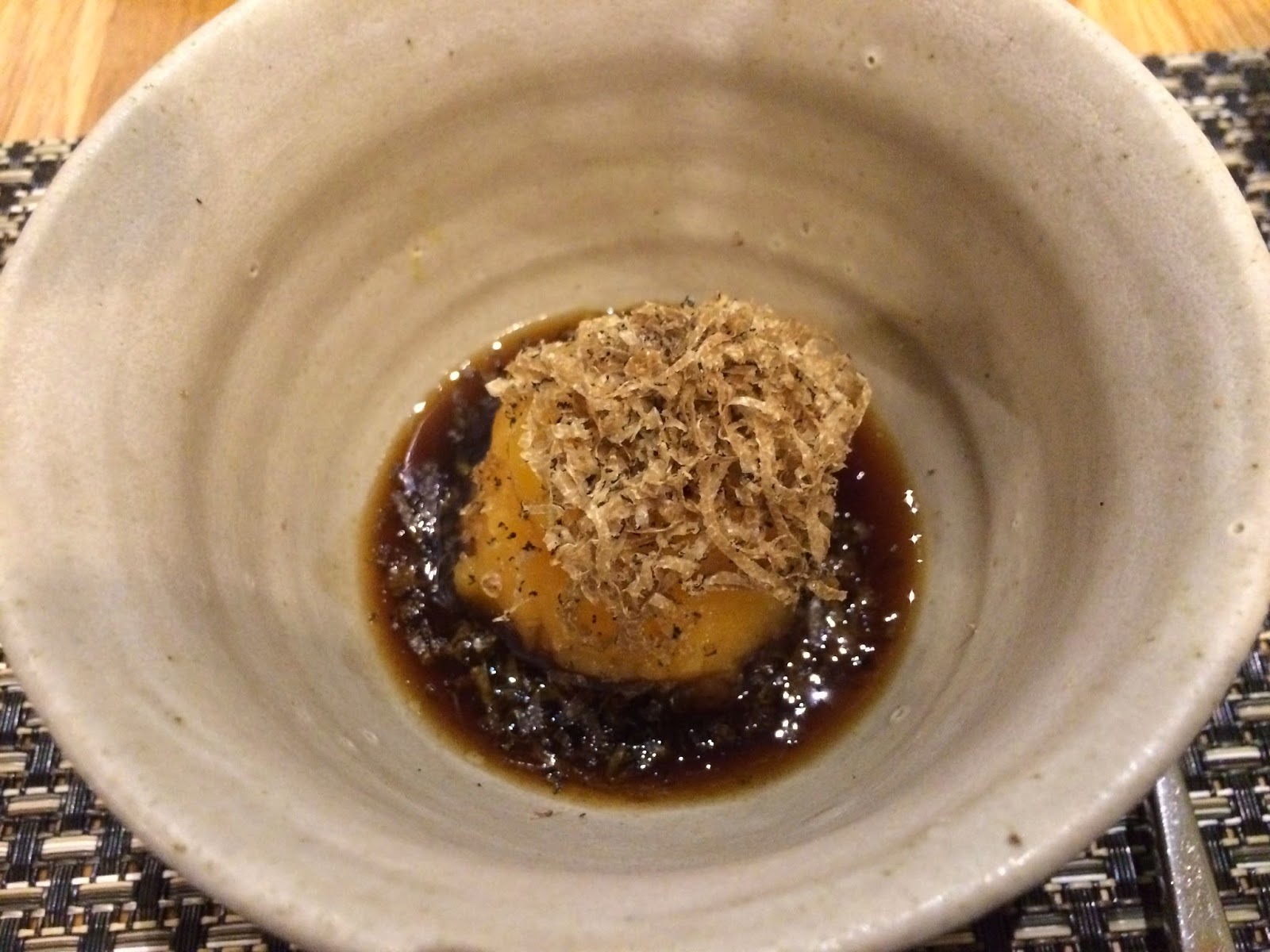 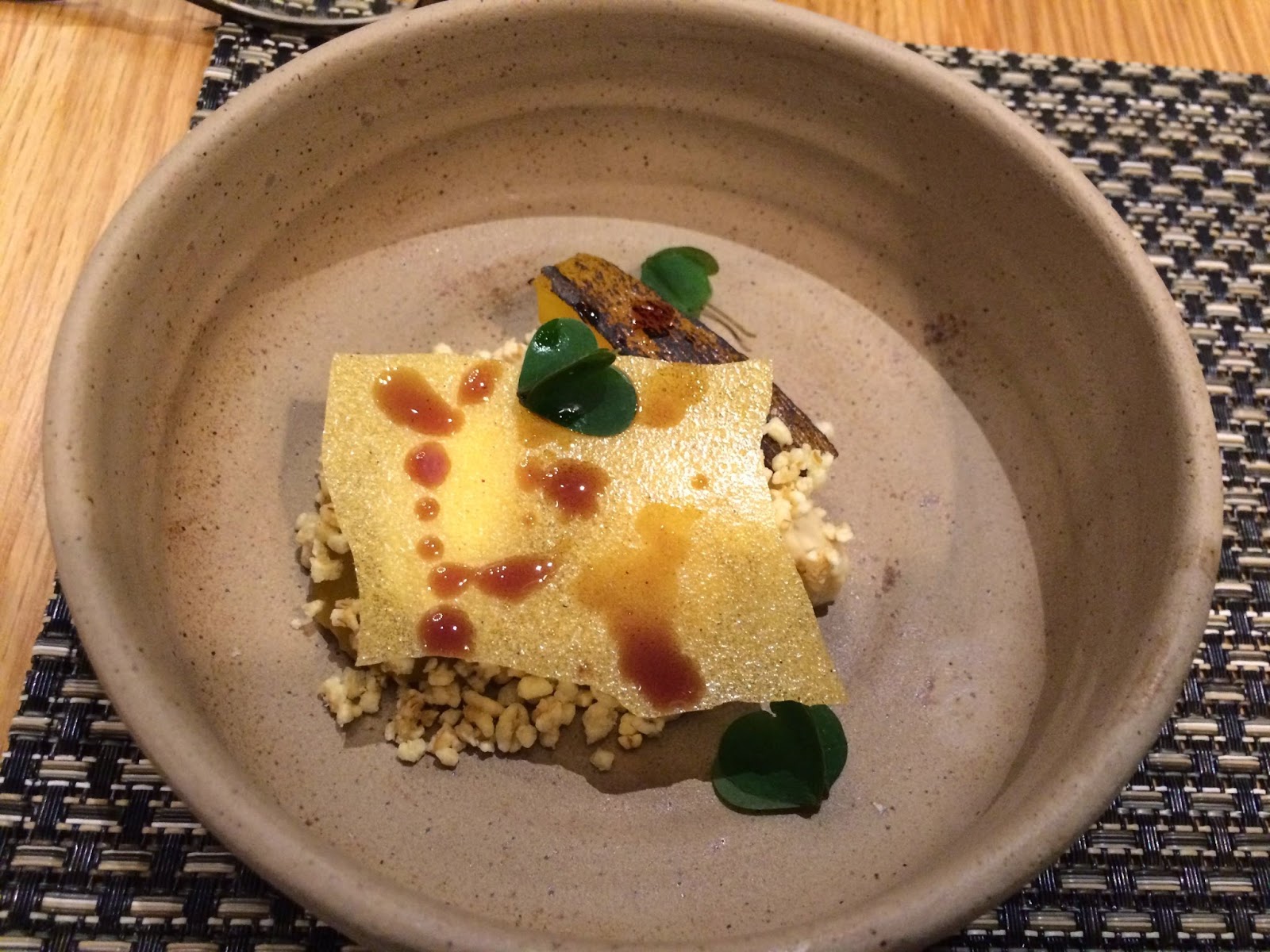 We closed with baked quince and brown butter ice cream, warm and cold with crispy surprises of ginger and bay. We made up our own wine pairing from a terrific selection of wines by the glass, including Sipp Mack’s 2009 Alsace Grand Cru Rosacker Riesling. 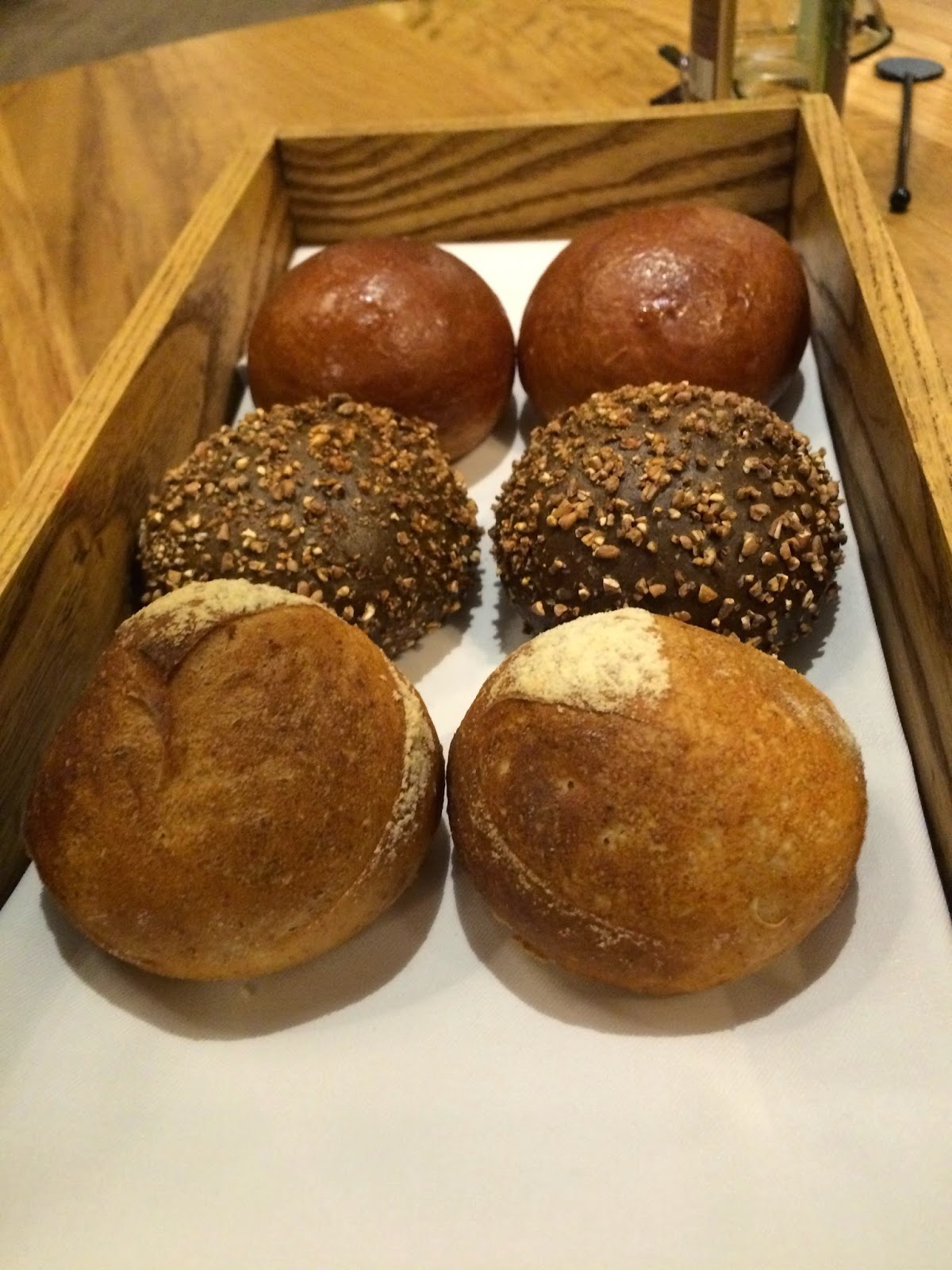 You know how some food bloggers go on about the service: as if it’s a shock to discover that restaurants unfold your napkin when you sit down? Well, allow me a little naïve gushing: this service was as good as it gets.


The staff were young, enthusiastic, proud, all of them trained in Cartmel, of course, which must be the finest catering finishing school on the planet. In the middle of one course, I felt my napkin slowly sliding to the floor. Before it even reached the Norwegian wood, and I was just leaning down to catch it, a hand reached over and, with a quiet “Allow me, Sir”, presented me with fresh linen. The service here is attentive but unobtrusive, uncloying. These waiters have eyes in the back of their head. The restaurant was almost full but they spotted one drifting napkin. I was amazed.

Manchester may seem an awful long way to go for lunch, particularly if you take the train, but apart from the real Parisian deal, which may be rather quicker, but will probably break the bank, I seriously recommend The French.