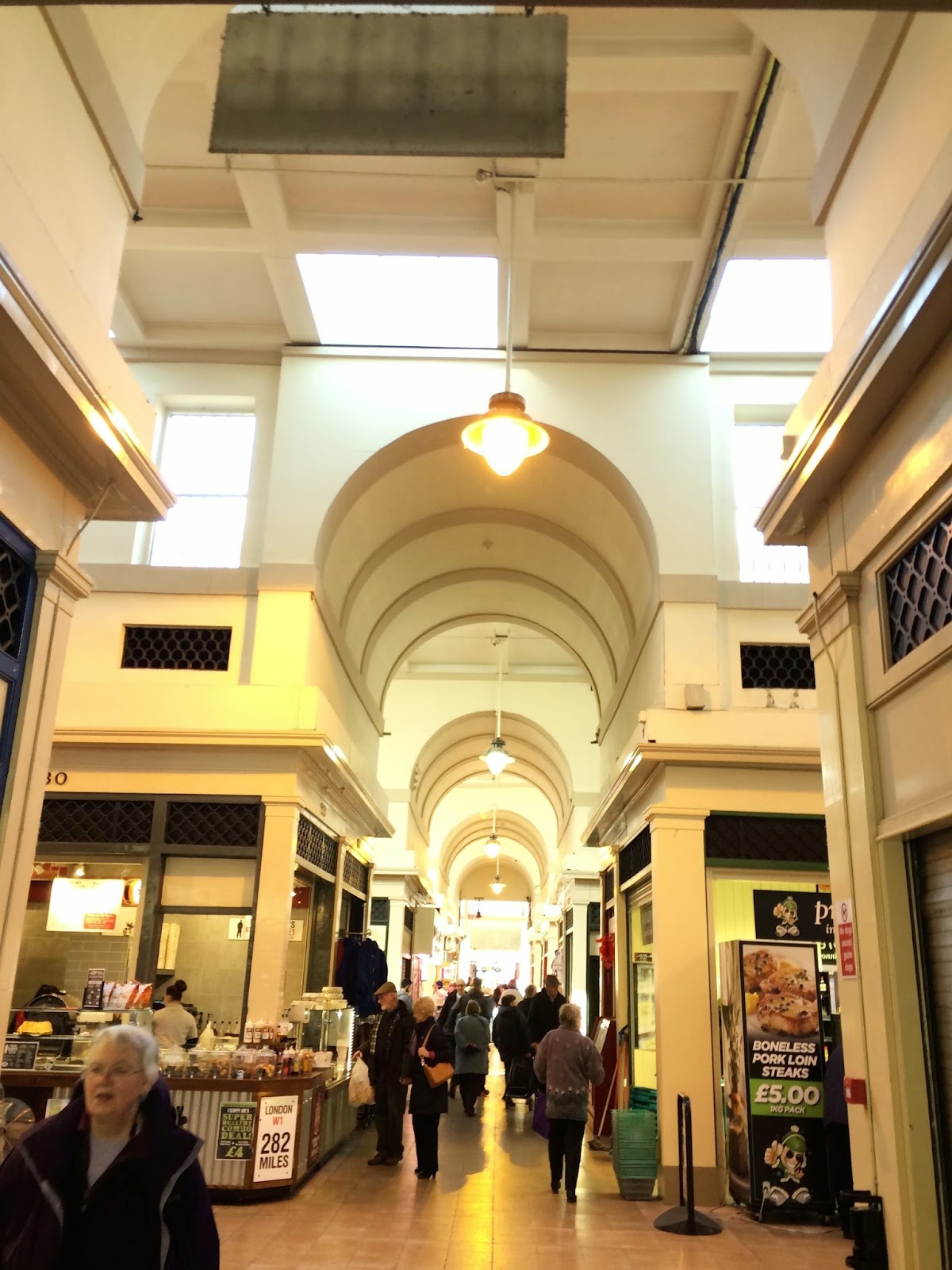 Years ago street food meant dodgy hotdog stalls serving drunken revellers, their hygiene even worse than their food. Or maybe greasy breakfast vans in lay-bys and giant trailers at festivals, spewing out the stench of stale onions.

How things have changed.
We now have the gourmet street vendor, with unusual dishes of exceptional quality, often based on a single culinary idea. Street food has grown so much, it’s moving indoors. Thomasina Miers turned a passion for Mexican street food into her chain of Wahaca restaurants.

Newcastle is ahead of the curve. The Boiler Shop Steamer, held in Robert Stephenson’s old Sussex Street building on the first weekend of every month (including next weekend - 6th & 7th March), offers a variety of treats, from Mexican to Indian, Taiwanese steamed buns to dirty burgers and pulled pork dribblers. 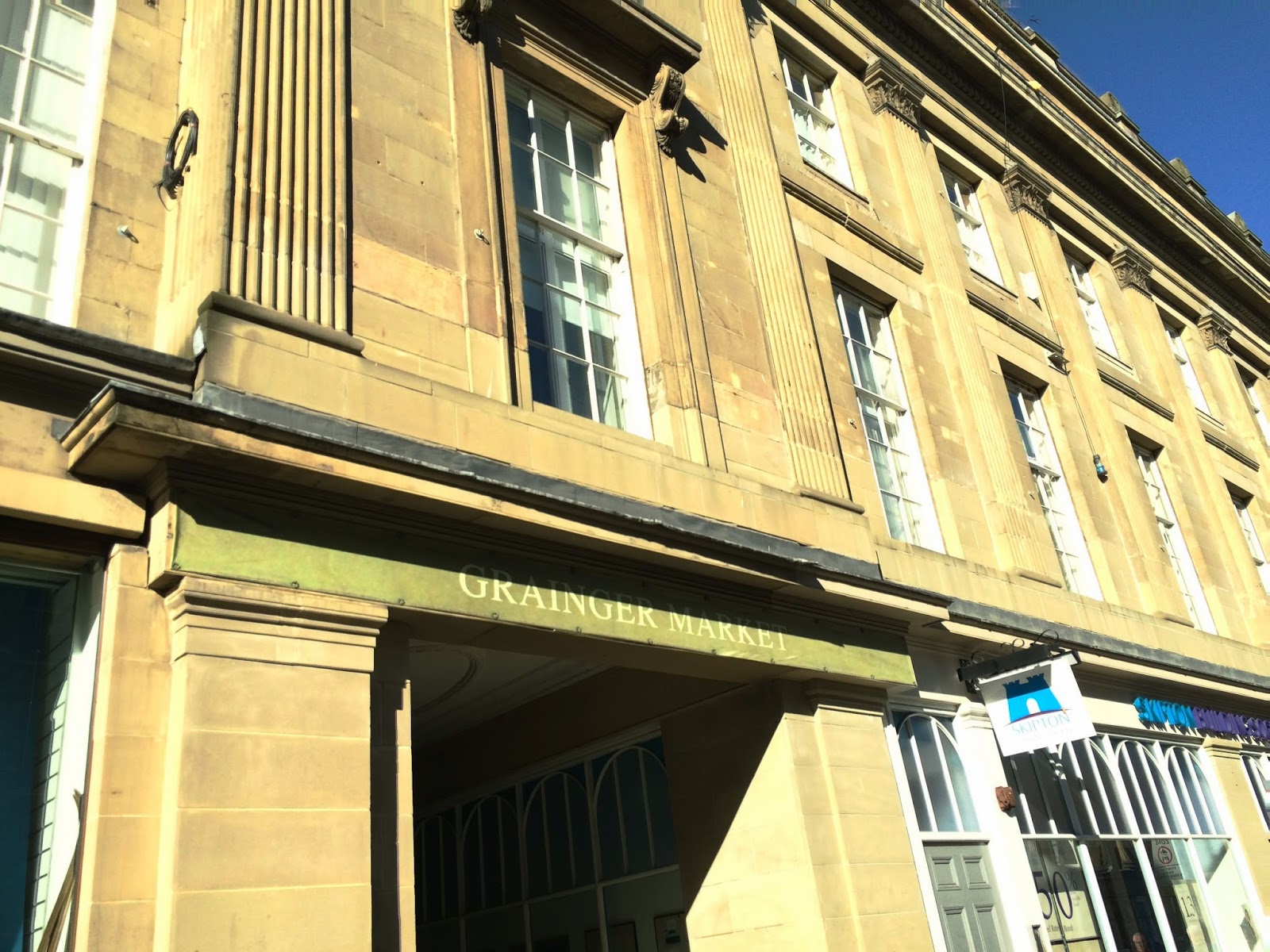 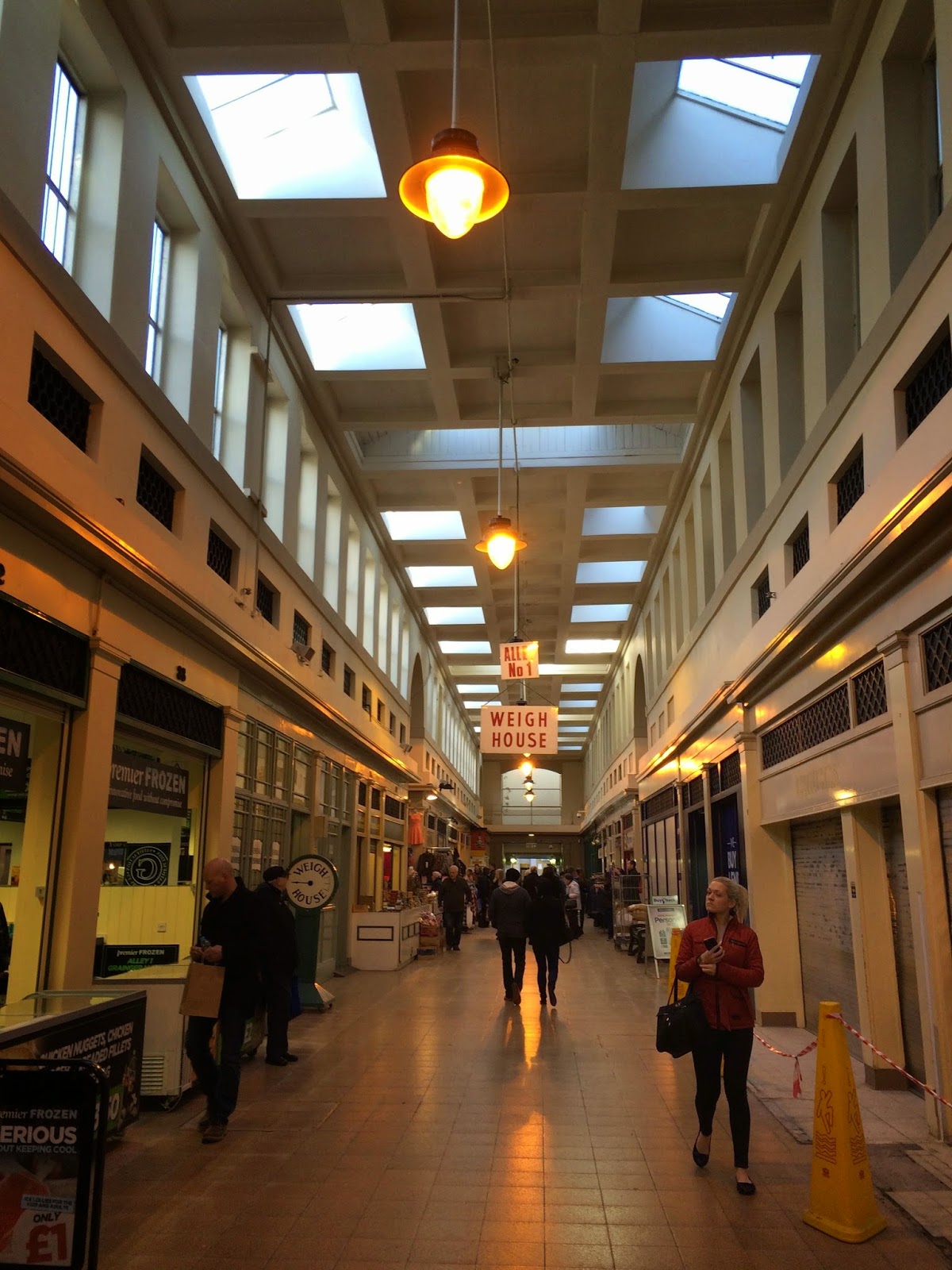 Grade I listed, in the 1830s it was the largest indoor market in Europe. Today you can find butchers, greengrocers and fishmongers, and a great deli called Mmm. You can buy a chef’s hat or a blond wig, weigh yourself for 30p, or browse vintage computer games – it’s a glorious cornucopia.

Last week it lost its Greggs, which is no loss at all, for as well as a good range of inexpensive cafés serving traditional breakfasts and lunches, pies and cakes, it’s home to The French Oven bakery.

Best of all, the Grainger Market allows you to go round the world in a single lunchtime. Mrs Diner and I took the tour. 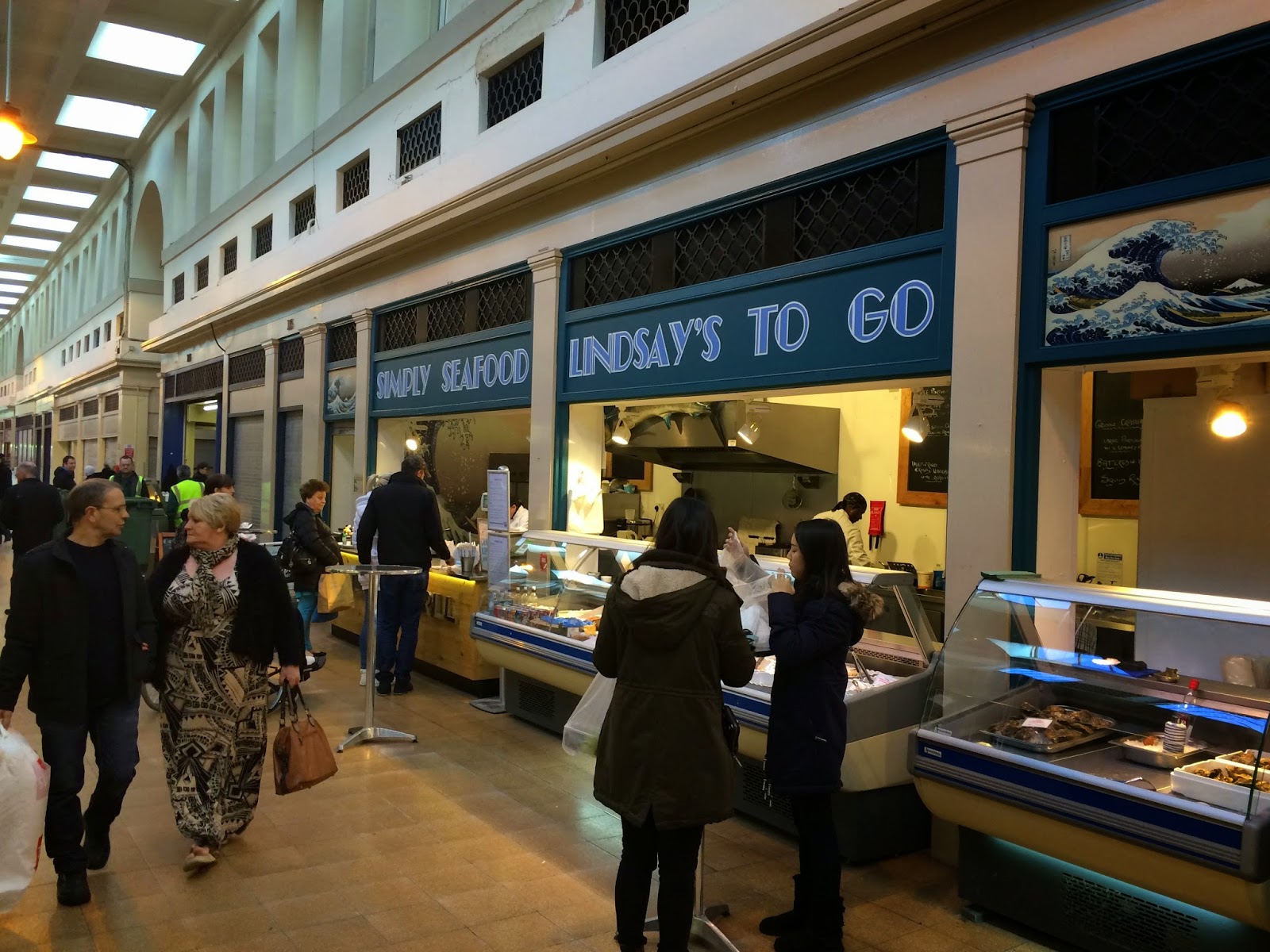 We started at Lindsay’s To Go, a seafood bar offering griddled kippers in a bun, grilled Portuguese sardines, tuna, noodles with crab, and Lindisfarne oysters. 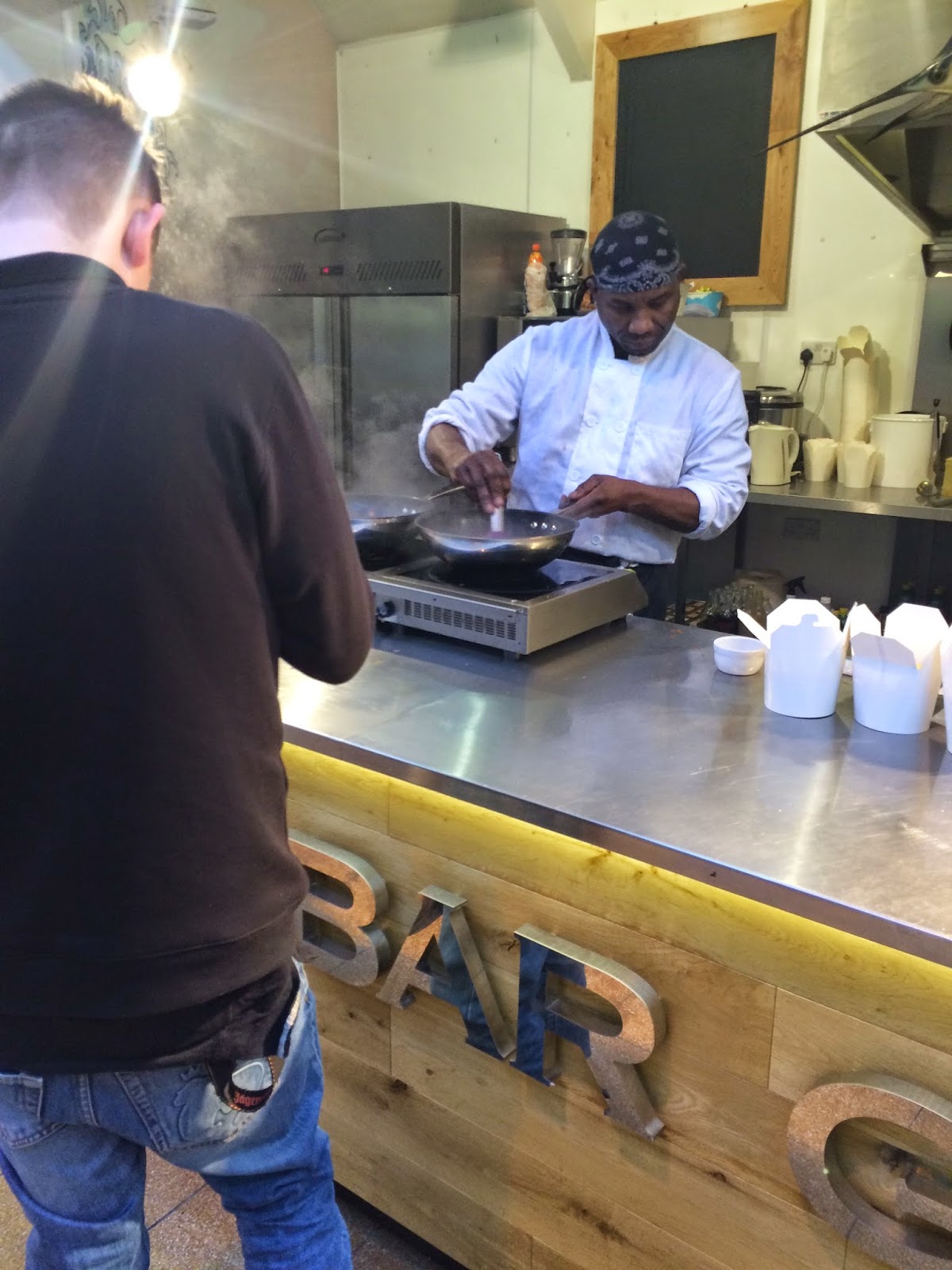 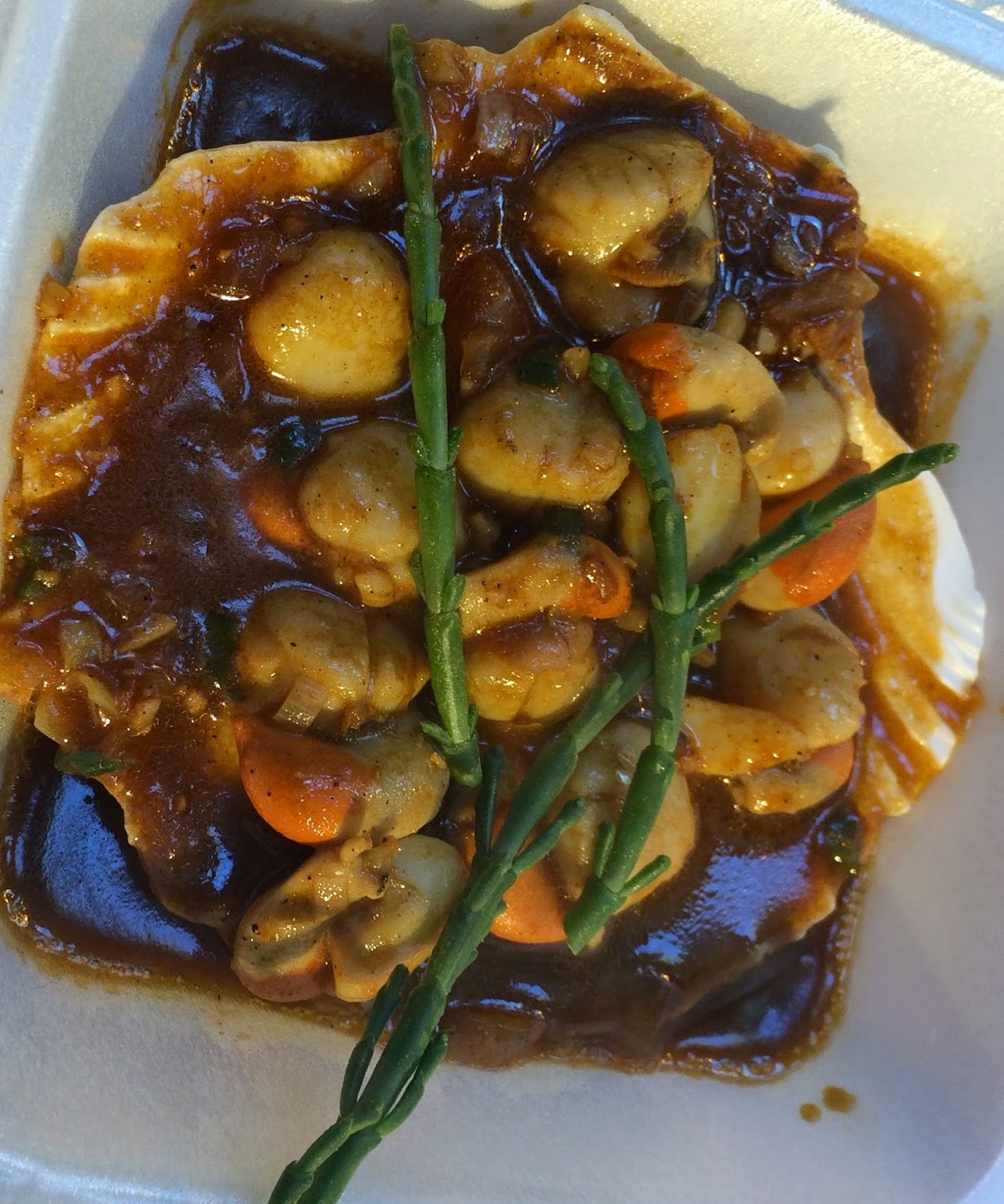 Queen scallops were poached in homemade tomato and garlic sauce, with added ground ginger and soy sauce, then poured steaming into a scallop shell with a few twigs of crisp samphire.

The sauce was dark and rich, the scallops were fresh, and it cost just £5.95. Paulo lent us his own spoon to scoop up the sauce. 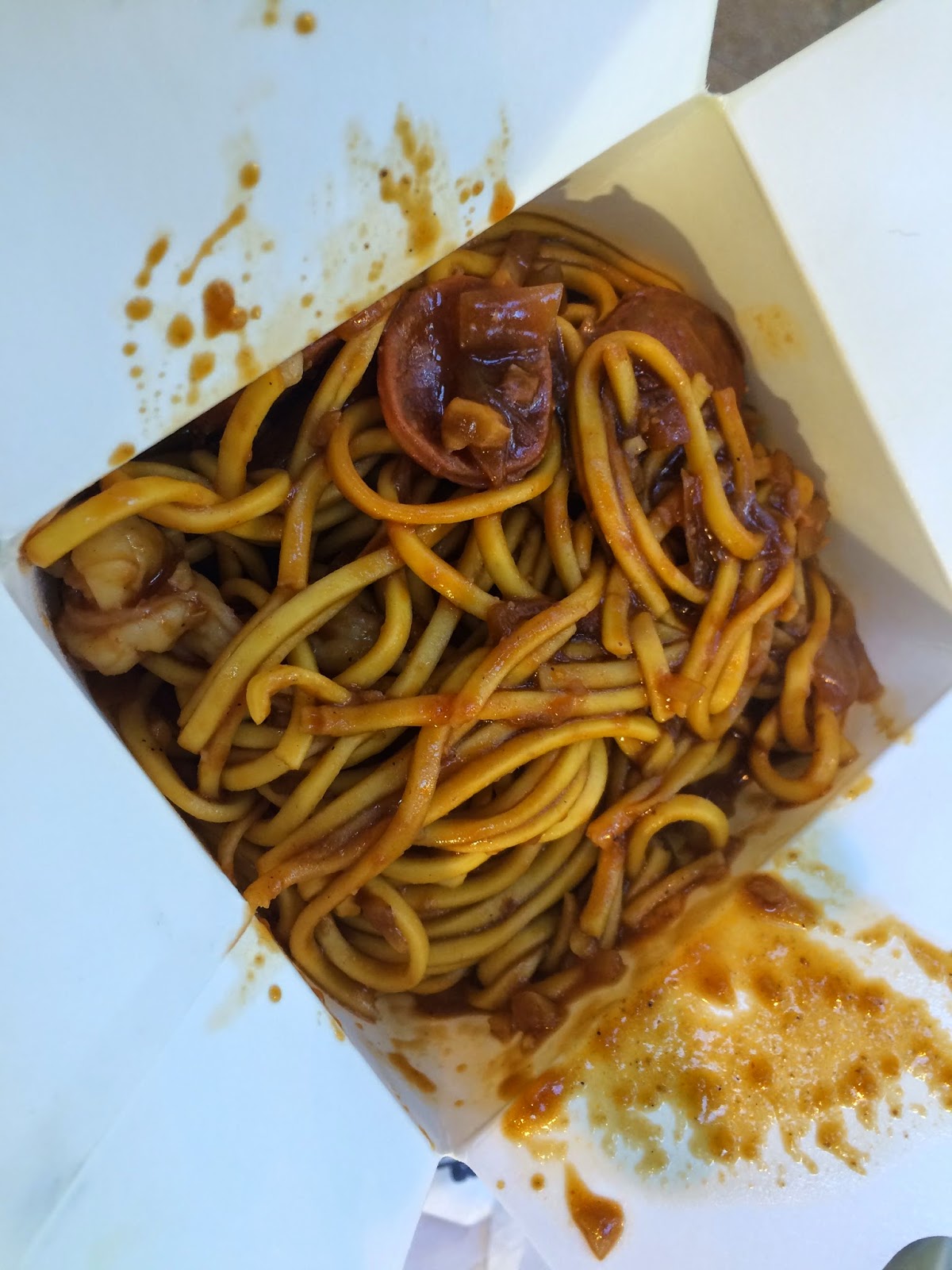 Tiger prawn and chorizo noodles were spicy, though it was hard to find the prawns. There’s nowhere to sit, for this is food-to-go, but there are round tables for perching. 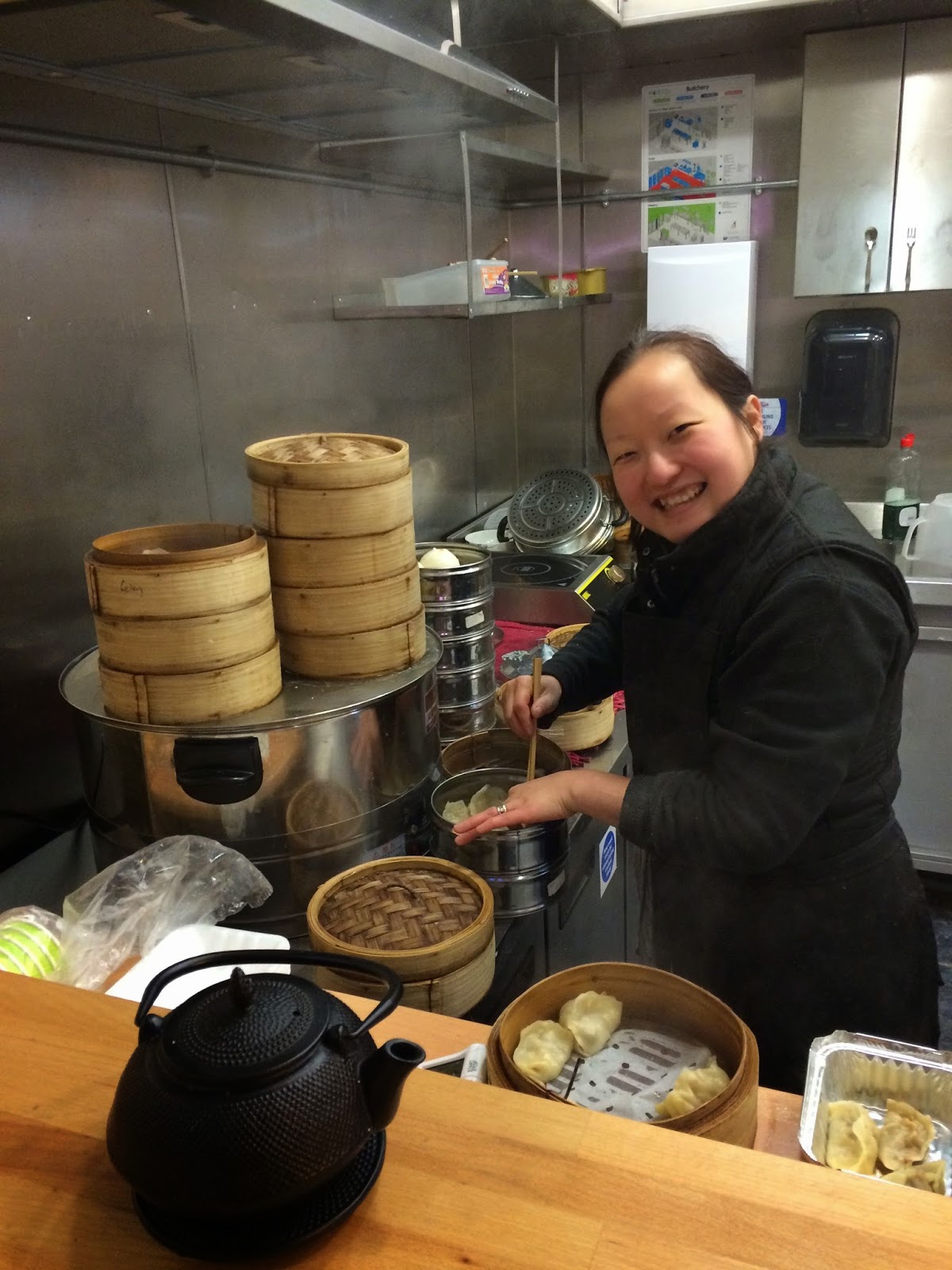 Then we wandered round the corner to China.

Maggie Snowball and her husband Simon own Quay Ingredient on the quayside, my 2014 Café of the Year. Maggie is from the spicy South West of China, and craved the dumplings of her homeland so much that she decided to give Newcastle its very own Chinese dumpling stand. 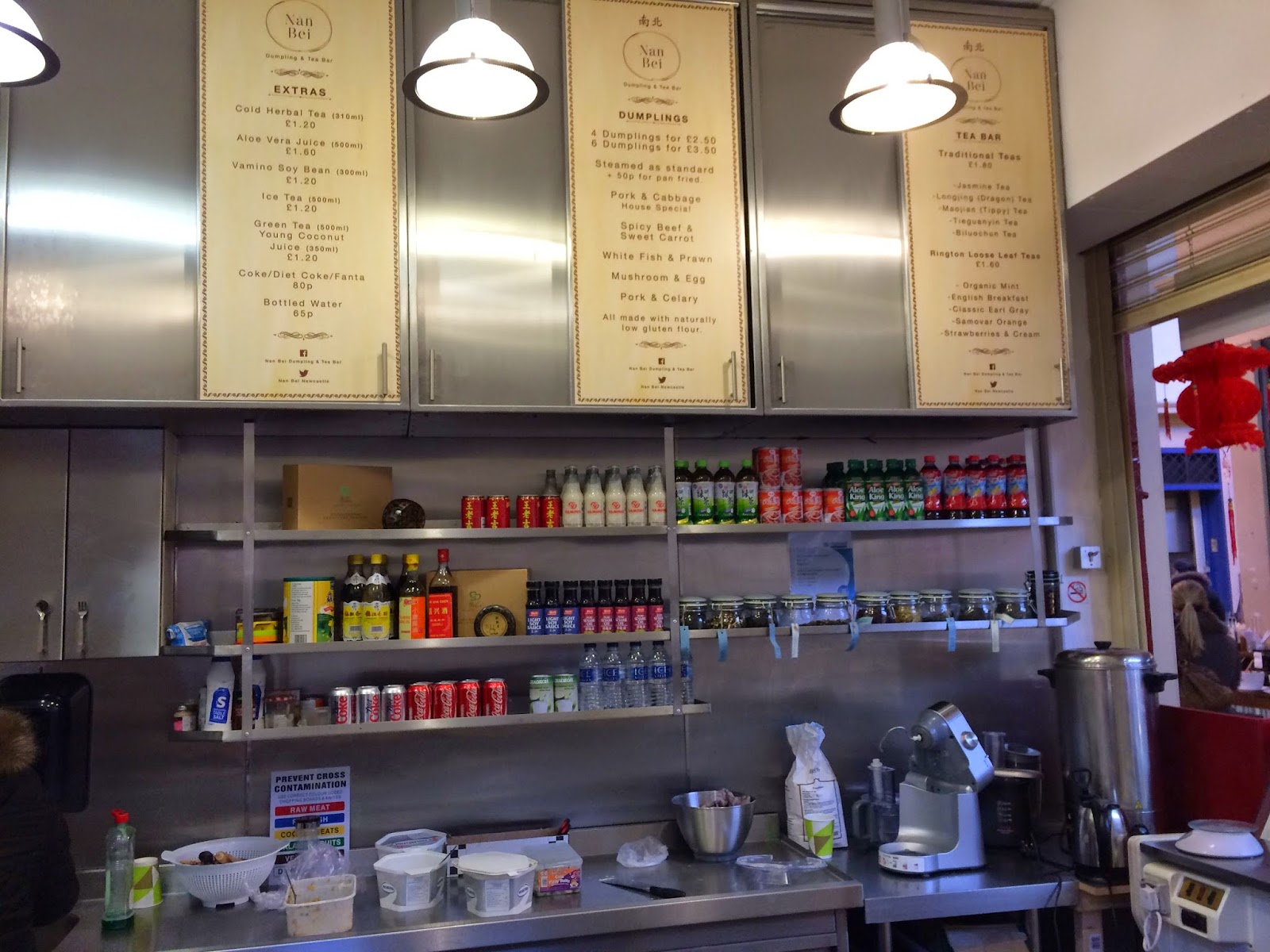 She’s partnered with Hong Li, a former chemical engineer from Xi-An in the cooler North West. South-North translates as Nan Bei – that’s what they call this tiny gem, selling freshly made parcels of pork and cabbage, spicy beef and carrot, mushroom and egg and white fish. 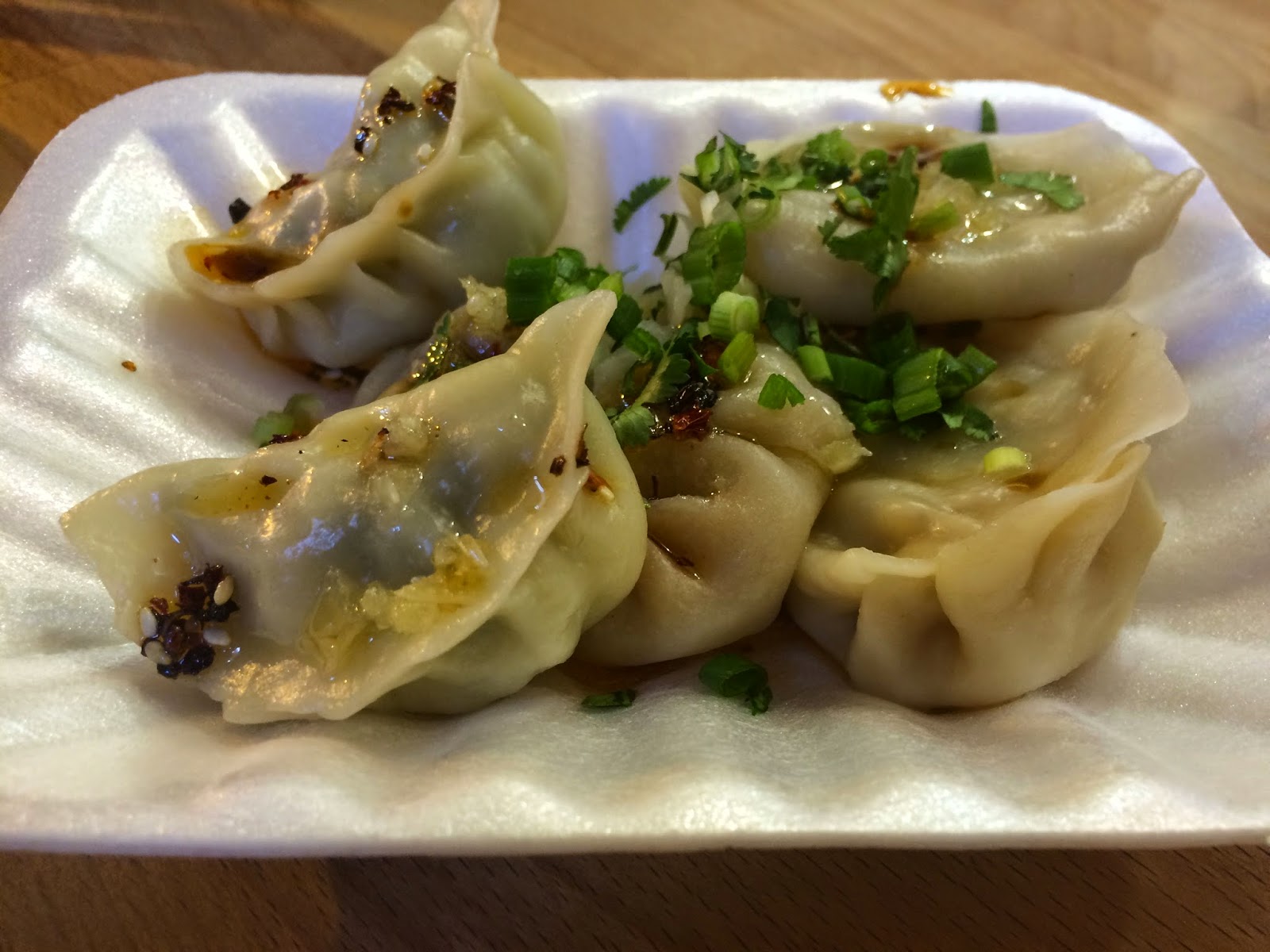 The dough has low-gluten flour that gives the dumplings a special lightness and there are pots of home-made garlic and chilli oils, spring onion and coriander for sprinkling. You can buy four dumplings for £3.50, but I guarantee you’ll order more. 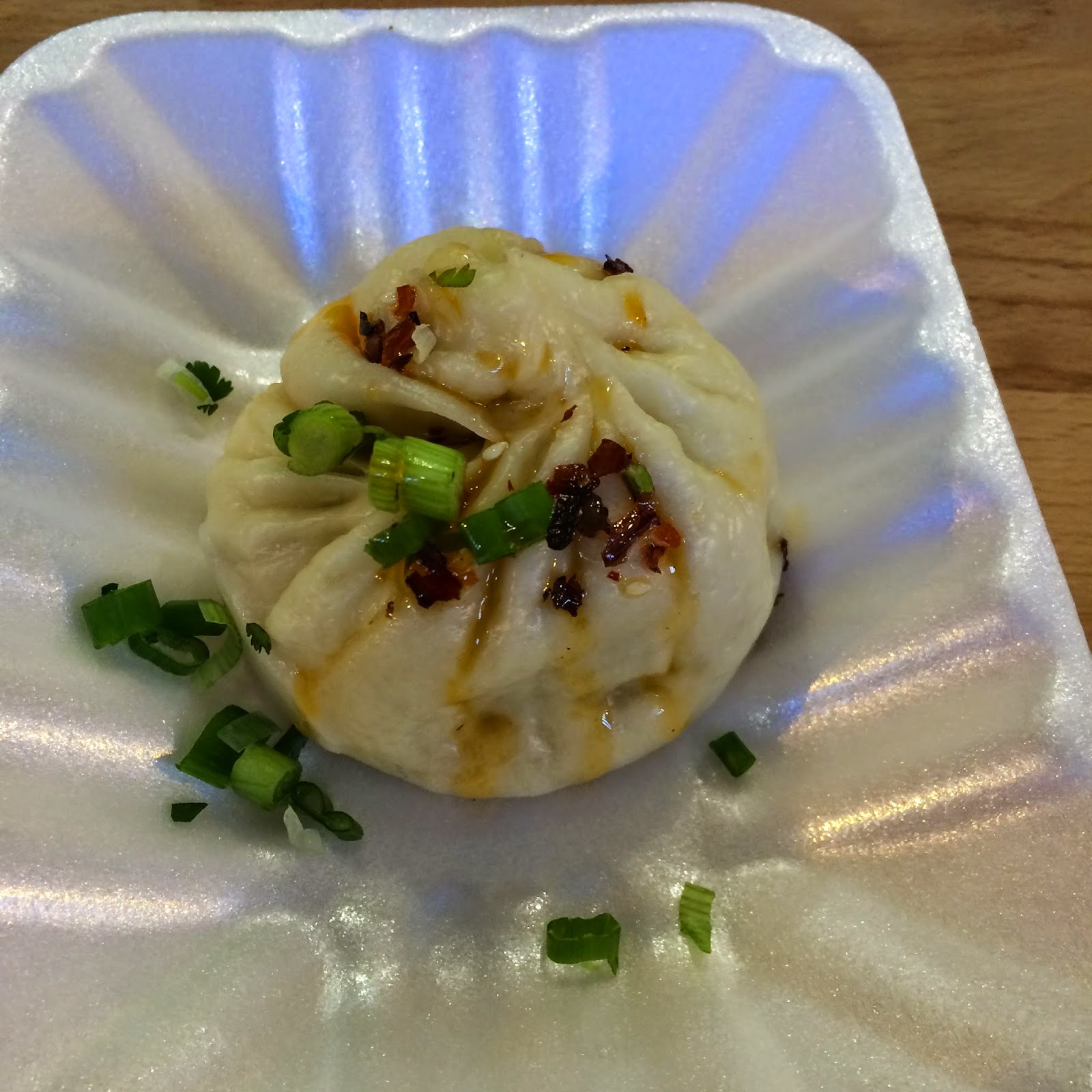 We also tried the char siu bao, superbly fluffy, filled with belly pork sweetened with barbecue sauce. They do pork and cabbage versions too.

Best of all was Maggie’s wonton soup, a light stock culled from a giant pot of chicken carcasses hidden away under the counter, and tiny wontons that dissolved on the tongue. 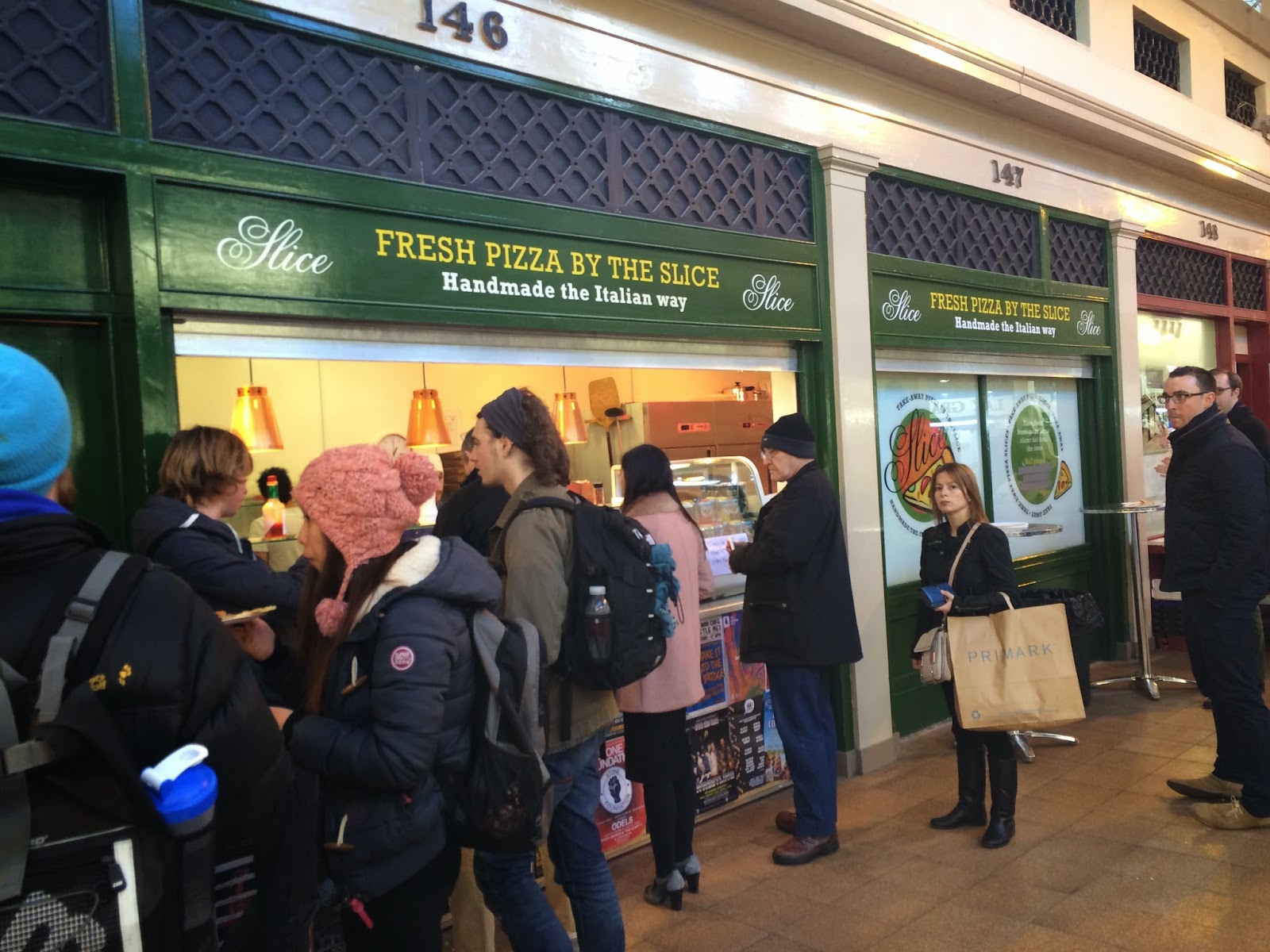 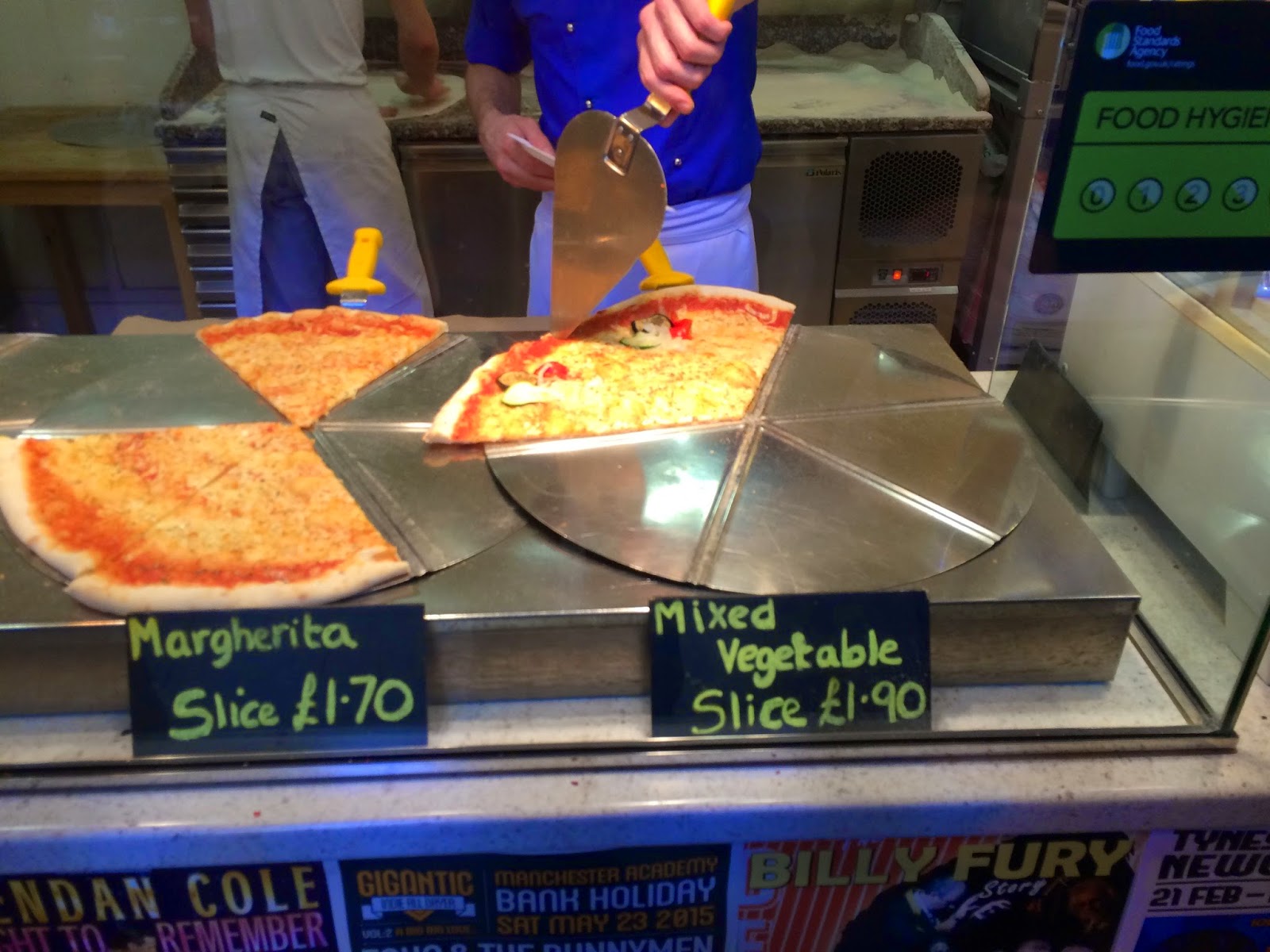 Next we moved towards Turkey, and on the way picked up a slice of vaguely authentic Italian pizza from a place called Slice. The slice, by the way, was of that ultra-thin crispy variety people buy off the street in Rome, with very little topping so it won’t drip onto their Gucci loafers. 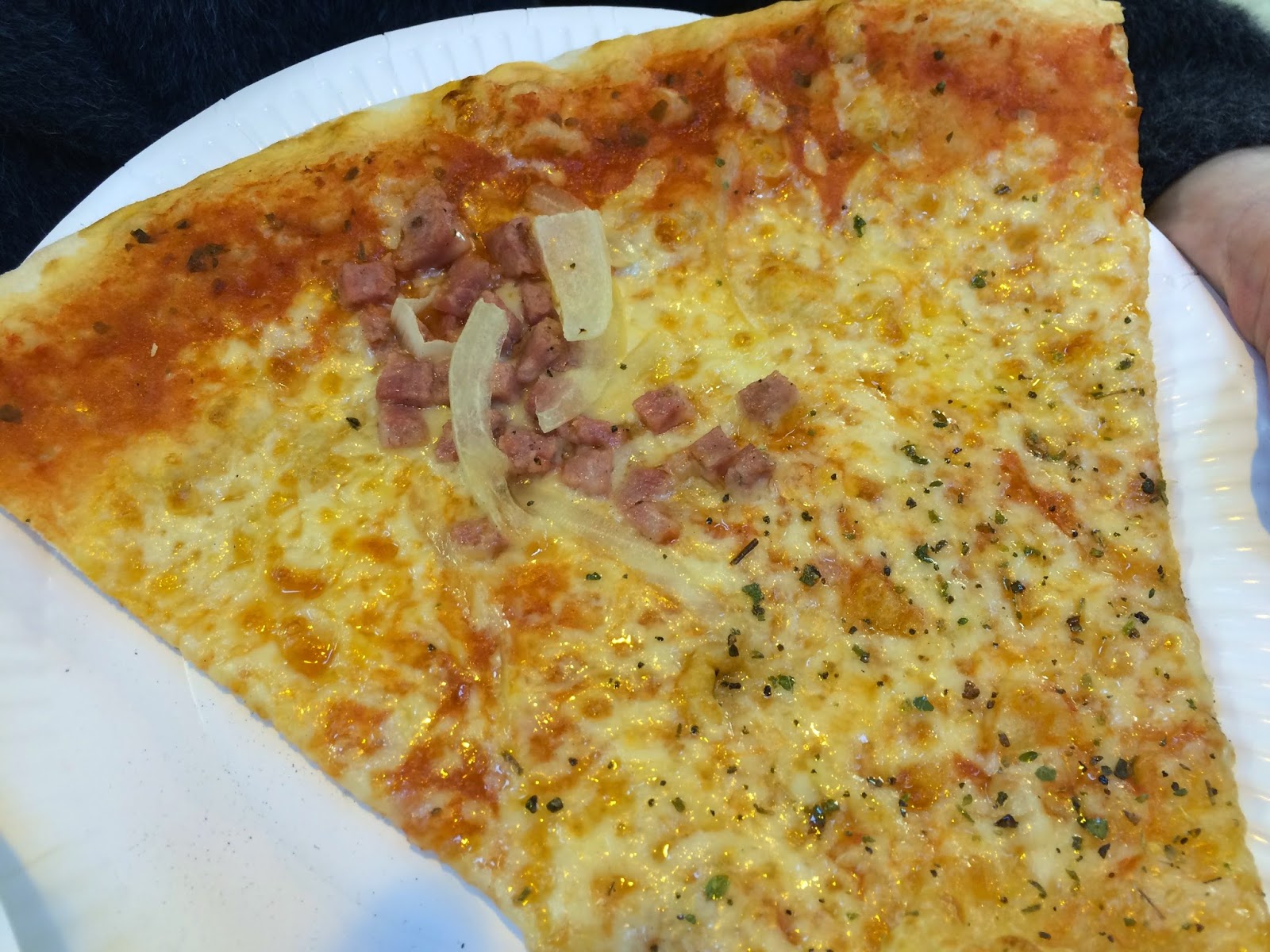 It cost £1.70 a slice or an extra 20p for the tiniest spoonful of sausage or vegetable. It’s fine, but unspectacular. As for Turkey, this was represented by Fez Food, which offers mezze, fresh juices, Turkish breakfasts, and traditional hot dishes like kofta and stuffed potatoes (kumpir). 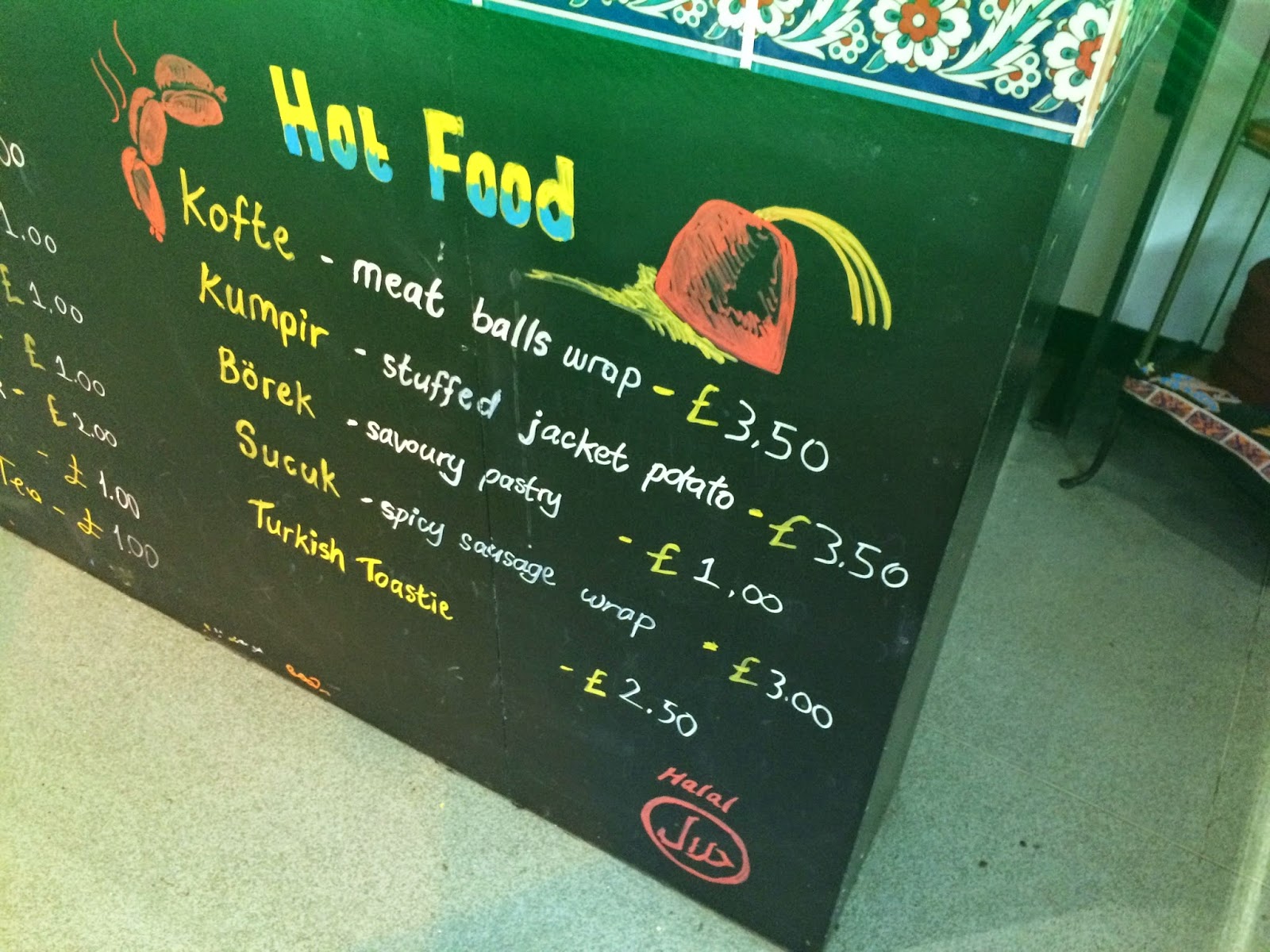 It’s owned by a young couple called Fleur and Ferit Ozdemir, who also have a shop in the market called Grand Bazaar. 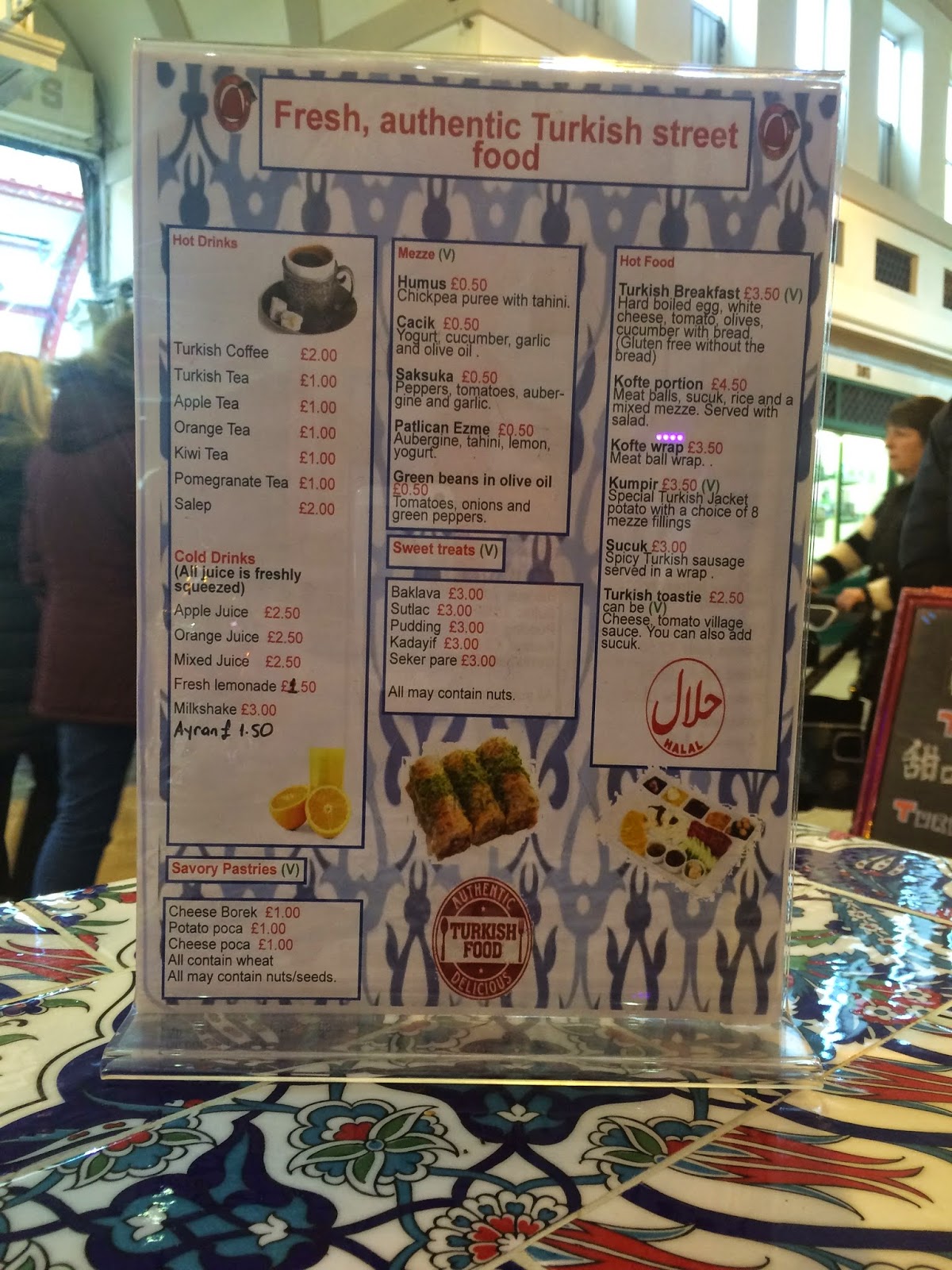 Fleur is a Geordie lass who went on a diet and lost half her body weight before going on a girlie holiday to Turkey where she fell in love with a waiter. They married and now she has a baby, a shop and a really nice Turkish café – sweet story, but I’d double my body weight if I owned this place. 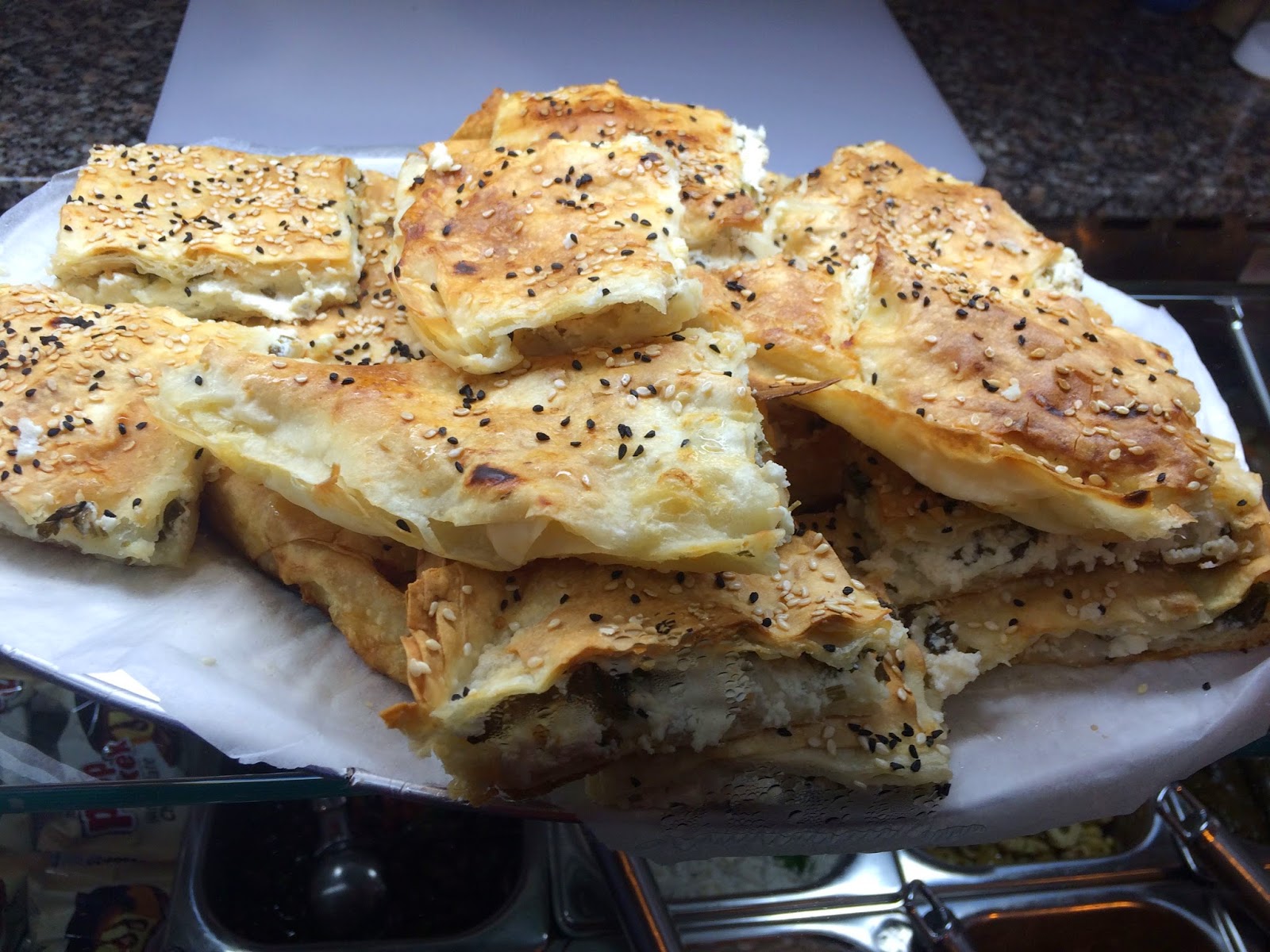 We had börek – savoury pastries – at just £1 each. One was cheesy spinach and sausage, the other spinachy cheese. Both were delicious. 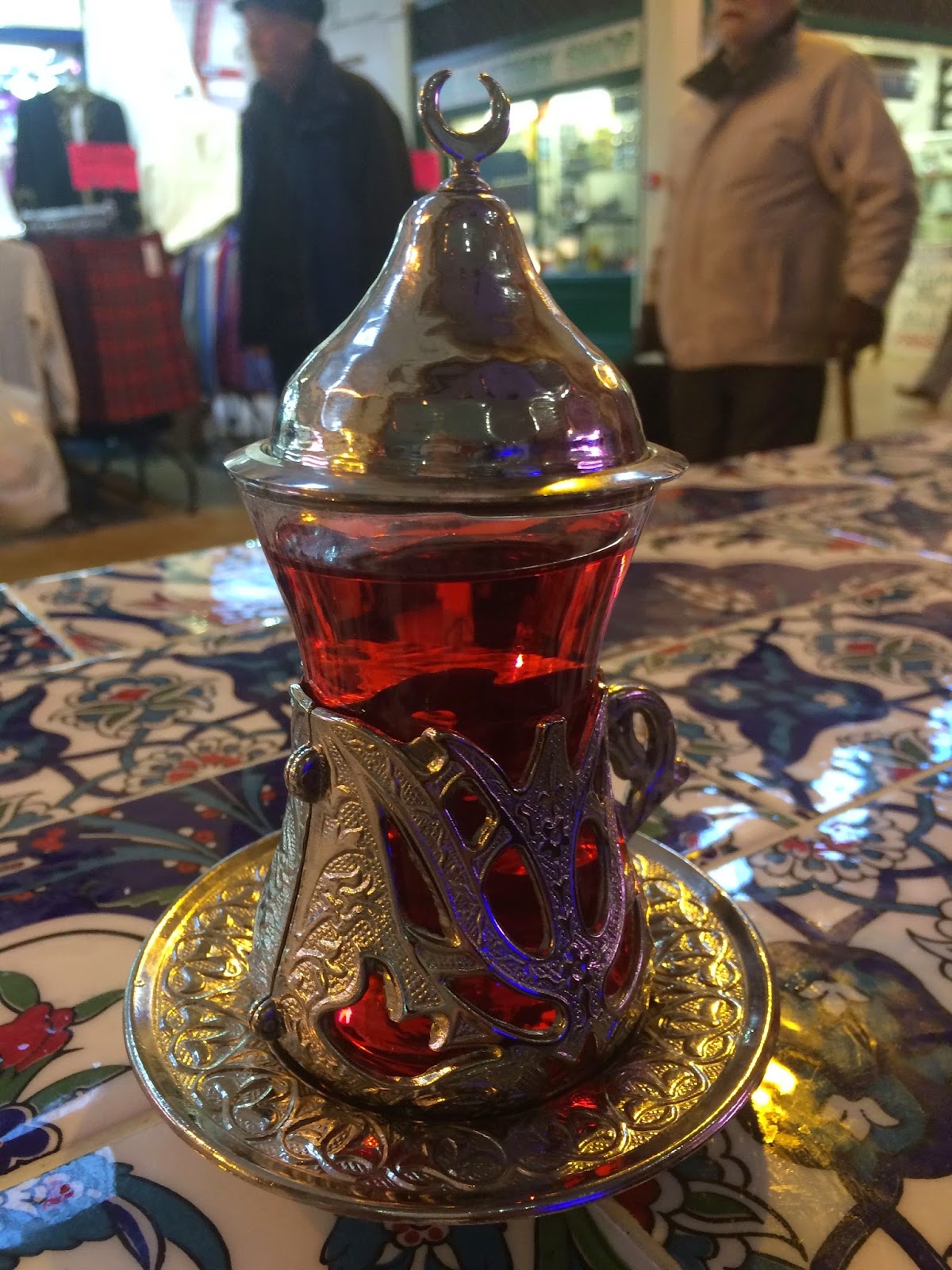 We ordered baklava, dripping with light honey, and sat on stools at a tiled bench watching the world go by, drinking Turkish tea from ornate glass cups with silver lids, listening to a group of Turkish men behind us arguing about something or other.

The girl who served us recommended we visit Red Flame, a large Turkish restaurant in Gallowgate. I made a note in the diary. It took just 30 seconds to walk from Istanbul to Paris, enticed by the scent of fresh crêpes.

Frédéric, who came to Newcastle 8 years ago, is a proper Gallic galette-maker. He and his partner Julien own La Petite Crêperie. 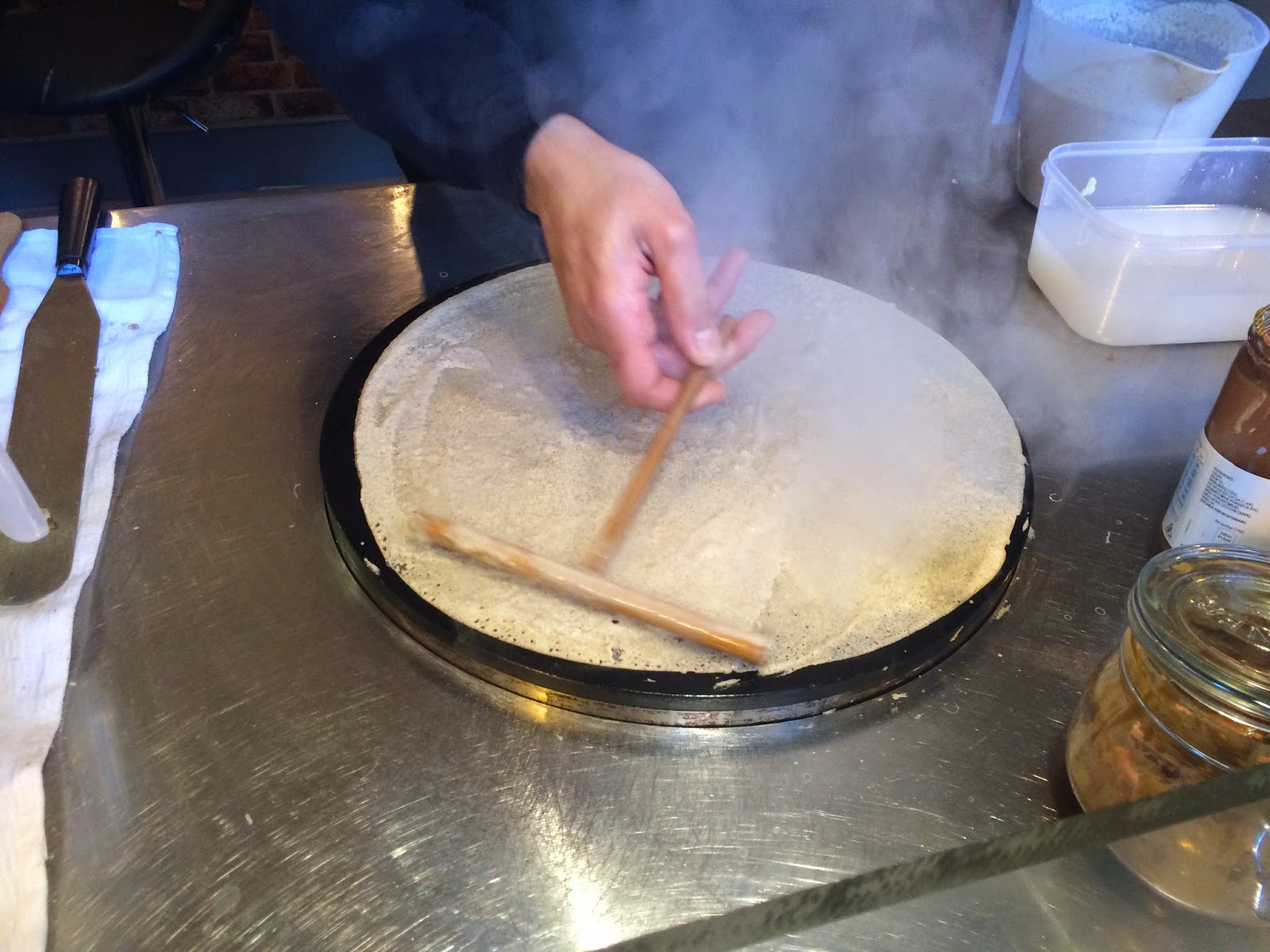 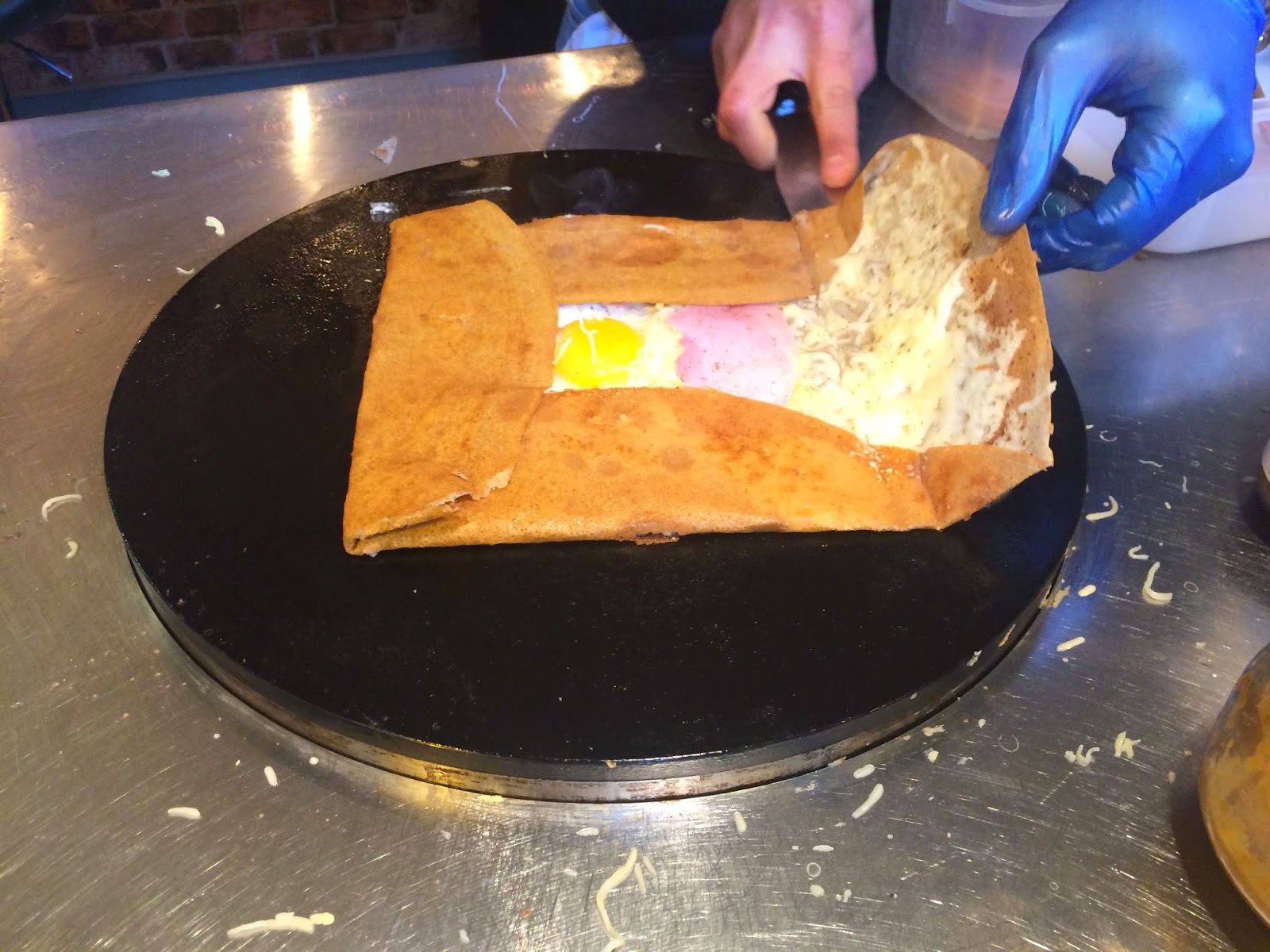 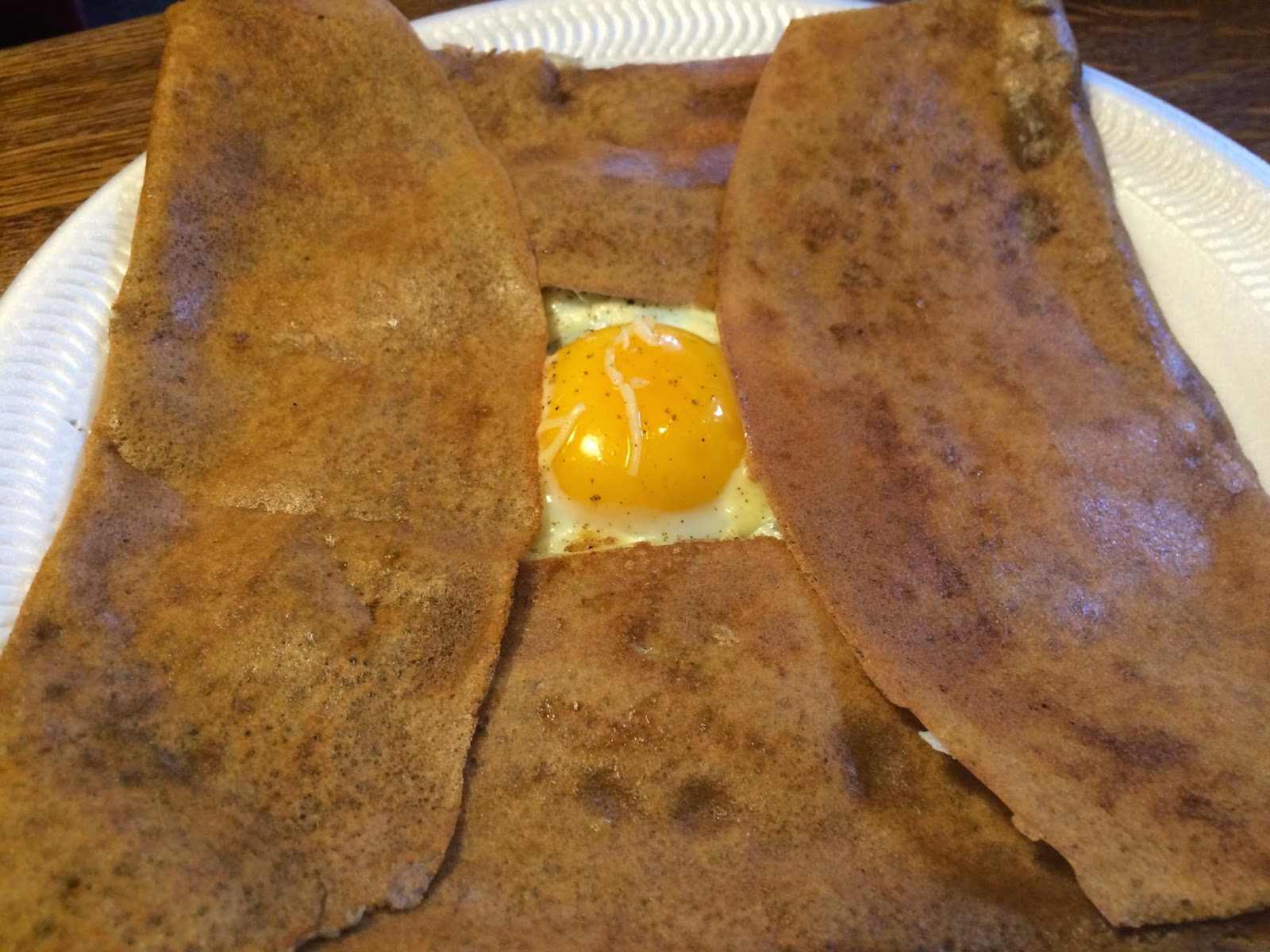 His buckwheat batter, which he turns into spot-on ham, gruyère and egg galettes, has been fermenting for over 12 hours before Fred, bantering to his audience of customers, sweeps it neatly round the griddle, carefully folding each corner into the centre without disturbing the soft yolk he’s placed in the middle. Perfect.

Afterwards I was about to head off to Pumphreys and Pet Lamb Patisserie for coffee and cupcakes when Mrs Diner calculated our calorific intake on this gluttonous round-the-world trip and called a halt. I could have gone on travelling, and I’ll certainly be back for more.