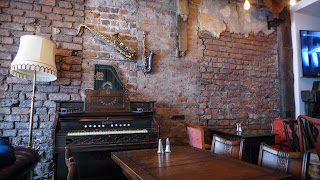 Note: no credit cards at present


Tomorrow there’ll be no Father’s Day celebrations in Warsaw. That’s because Polish Dads get their special day on Tuesday, two days after the rest of the world.

I have no idea why this is, but I’m pretty sure it means there won’t be any spare tables in Baba Yaga come Tuesday night. It’s Newcastle’s newest, and only, Polish restaurant. 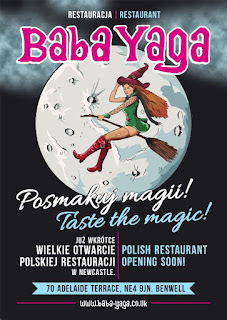 Its launch last week was the subject of great excitement in our region’s growing Polish community. Malgosia’s Polish supermarket in Newgate Street already does a roaring trade in pickled gherkins and Krakow sausage, and they have a chain of “European Foods” stores in Gateshead, Consett and Darlington too. But until now it’s been impossible to find a decent Polish restaurant in our region. Maybe Polish ex-pats prefer their cooking in the safety of their own homes, or perhaps no-one’s managed to get the formula right till now.

Newcastle did have a Polish restaurant for a while, called Gospoda. The first time I ate there, unfamiliar with any of the dishes on the menu, I mis-ordered spectacularly, and ended up with what was effectively a tasting menu of cabbage. Mrs Diner wasn’t impressed.

However, through eating with Polish family friends, and during a holiday to the country (if you ever get invited to a Polish wedding, I recommend you accept, but beware: I have never been offered so much food in my life), we’ve grown to appreciate the country’s range of hearty stews, pickled and fermented dishes and endless varieties of cured pork.

Gospoda eventually moved from small premises near the library to the city centre, where it became Restaurant Krakow, which quickly lost its way in a blizzard of Groupon vouchers and closed. Since then I’ve had nowhere to satisfy my (admittedly occasional) cravings for bigos and pierogi. Until now.

Baba Yaga is in Benwell, just yards from a hairdresser’s called Szalone Nozyczki, which roughly translates as Shear Madness. This was the name of a famous Polish theatre show about a murder in a hair salon. I am happy to report that no culinary crimes were committed during our meal at Baba Yaga. It’s as authentically Polish as you could possibly expect in Benwell. 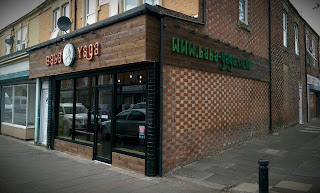 From the exterior it’s not immediately obvious that this is a restaurant, which is something they might want to think about. Once through the door we were completely charmed by the interior: mis-matched furniture in dark wood and leather, prints of vintage newspapers from the Second World War on the walls, exposed brick, distressed beams, antique musical instruments; it’s only a tiny room capable of squeezing in about 25-30 diners, but there was a lot to catch the eye. Not least the menu, which featured just about every staple a homesick Pole could crave.

We pretended we were at a wedding and ordered as much as we dared. Bigos, the national dish of Poland, was on the list of starters. 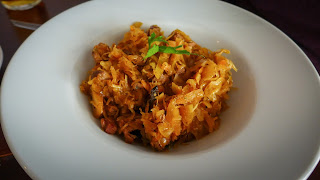 Of course you’ll all know it from the great epic poem Pan Tadeusz. Not familiar? You weren’t brought up in a Polish school, then, for it’s compulsory reading for every child in the nation. A stew of fresh and preserved cabbage, pork, sausage and dried mushrooms, bigos is sweetened with pitted prunes and sometimes apple. The result is tangy, sweet, sour, smoky, meaty and completely delicious. This rendition was right on the mark, a generous bowlful with some good Polish bread on the side for the absurd price of £2.50. 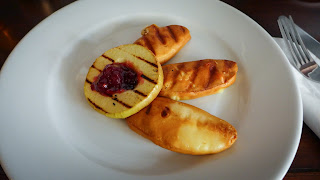 Another starter of grilled Oscypek cheese comprised three thick wodges of something like smoked halloumi, served with a grilled slice of apple and some cranberry jam. The fruits’ tang was an ideal foil for this intensely savoury cheese.

This was the real Polish deal, and the mains were even better. 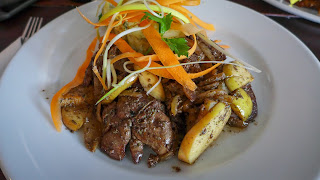 A mountain of chicken livers arrived barely, and therefore properly, cooked – still blushing pink at the core. They’d been swimming in a sea of herby butter and sliced apple and came with dill-flecked potatoes, with properly sour dill pickles served on the side. 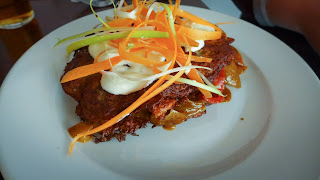 Placek was even better. Basically massive potato rösti, two of these appeared as a sandwich containing a stew of slow-cooked pork shoulder fragrant with juniper. The top placek was crisp, the bottom had soaked up the flavours of the stew: it enough to make any Polish Dad cry. 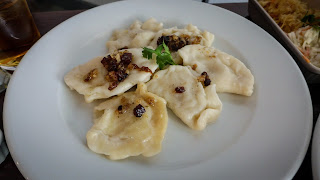 The meal got stodgier with pierogi, half-moon shaped dumplings, served either boiled or fried, and topped with crisp bacon fried in butter (of course). Our filling was Russian style, basically potato, onion and cheese.

These weren’t up to snuff. One had burst, and the others were slightly undercooked.

“You should never serve a burst pierogi”, Mrs Diner cautioned, waving her fork at it disapprovingly like Baba Yaga herself, the mythical witch-granny character of Polish folklore. 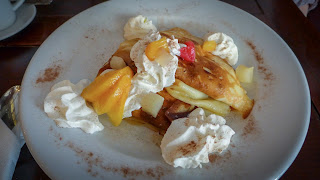 Despite having consumed enough stodge for an entire nation, we shared a plate of pancakes filled with vanilla-flavoured quark, studded with raisins. But what we really wanted was cake. Poland is a land of great cakes; Baba Yaga would do well to get some made for them. We did enjoy excellent espresso, though.

The wine selection was very limited so while I tried a pleasant Slovak beer called Zlaty Bazant (Golden Pheasant) Mrs Diner had Zubrowka and apple juice. When in Krakow, and all that.

We were the only table speaking much English during our visit, but someone I took to be an owner assured me that as well as Eastern Europeans, Geordies are already discovering this restaurant. I hope plenty more do. This is a cool little place, and I’m happy to recommend the food.

Polish food of this type is not terribly refined, nor should it be. It’s comfortable, homestyle cooking, big on flavour and portion size and very modest in price. Despite eating enough to last us till next Father’s Day, this meal cost us well under £20 a head, and you could easily eat here for less. We’ll be back to try the soups, salads and the “herring three ways”, whatever that is.