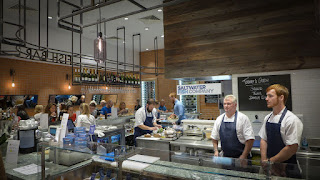 It will have escaped the attention of nobody with even a passing interest in Newcastle’s foodie scene that the venerable old girlthat was Fenwick’s food hall has been subject to a pretty full-on vajazzling.

Where things had become a bit fusty, this new-look venue feels modern and classy, a culinary centrepiece befitting a city that has seen massive improvements in gastronomic standards over the last few years. Everyone involved can afford to feel rather pleased with themselves. 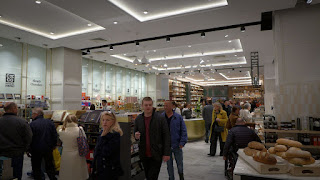 Just as interesting as the look are the new product lines and concessions. Sayonara to the revolvingly mediocre chain sushi, hello to the excellent Ouseburn Coffee Company, premium cheese from Neal’s Yard Dairy, “clean” food from The Naked Deli and several others. For those of us who take our eating a tad more seriously than we probably ought, a trip to Fenwick has become an adventure.


Mrs Diner and I weaved our way through the gawping masses on the first Saturday after it all re-opened, full of the sense of anticipation that comes with the prospect of a really good lunch. Fenwick has been working with royalty here – Terry Laybourne – the man who deserves a knighthood for his gastronomic services to Tyneside, is behind several of the new eateries, including Fuego, a Med-inspired small plates affair, owned by Fenwick itself, and an Asian noodle bar effort called Ko Sai.

However, it was to the stools that line the marble topped bars of The Saltwater Fish Company that we were drawn on this occasion. Laybourne, admirably, is very hands-on; he was in the kitchen during our visit, which boded well.

Saltwater and Ko Sai are both owned by his 21 Hospitality Group, which is in the middle of its own makeover right now. Café 21 no longer pretends to be a café – it’s been rebranded as 21 -- and sadly the much-loved Bistro 21 in Durham has shut its doors, for Terry and his group are now focussed entirely on Newcastle. 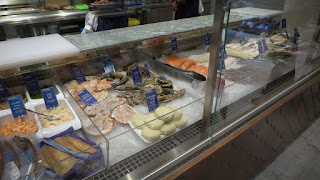 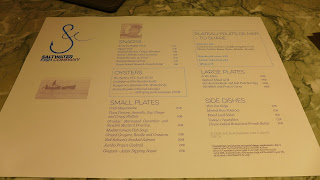 The idea for this place is simple. A well-stocked fishmonger counter provides the freshest raw materials from which a regularly changing menu is hewn, accompanied by a list of fish-friendly wines. It sounds great, and I’m sure it will be. On the evidence of our visit it wasn’t quite there yet. 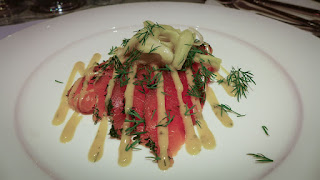 Make no mistake, some dishes are excellent. Gravlax has been expertly cured, and had a fabulously firm texture. Marinated cucumber provided freshness and crunch, while the mellow tang of a Swedish mustard dressing offset the rich fish. 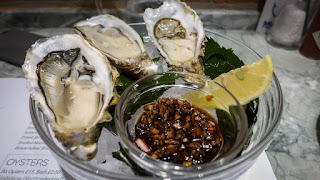 I tried all three of the oysters available. They sat prettily on their bed of ice and seaweed, and were pristine specimens. I’m always amazed at the variation in flavour between different varieties. On this occasion the Jersey and Dungarvan oysters shared a pronounced creaminess, after which the saline thwack of the Lindisfarne was a pleasantly bracing jolt. 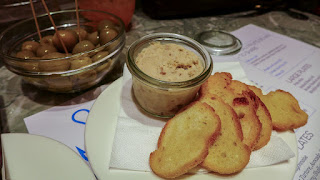 Considerably less fun was a kipper pâté, which tasted decidedly flat and oddly unsmokey. It lacked seasoning, and maybe a good squeeze of lemon. Either way, it wasn’t helped by being fridge cold, perhaps a fly in the ointment of the “cook what we sell, sell what we cook” approach being advertised. Anchovy stuffed olives tasted just like the tinned ones I’m moderately addicted to at home, which is praise, sort of.

Wanting to cast a net over a good selection of their wares without having to be rolled out of the place on a shopping trolley, we decided to share the seafood mixed grill as a main course. I wanted to see how accurately everything was cooked. Pretty well, mostly, is the quick answer. 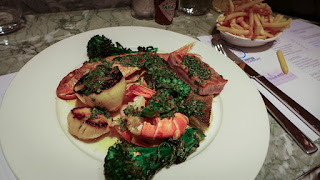 Best was whole red mullet, which lifted us straight from a packed Northumberland Street to some isolated Mediterranean island. Sea bass was also well cooked, the flakes doing their flaking thing perfectly. Tuna was nicely seared, benefitting from a good dose of cracked black pepper, but elsewhere on the plate we found some issues.

Crisp salmon skin is the piscine equivalent of pork scratching. A shame then that this one was limpid, while the fish itself was overcooked. A similar fate befell an enormous king prawn. And was it a little parsimonious to serve only one scallop on a platter that, in our case at least, was to feed two? A portion of decent skinny fries did a good job in mopping of the garlic butter sauce that anointed all this.

These minor timing problems are easily corrected. Happily, there were no such complaints about the venue, which is rather lovely. You’ll either be sat at the marble-topped counter with a view over the kitchen, or with your back to it, in which case an angled mirror allows for a similar view.

It’s all about the bass – or rather, the chefs cooking it. You couldn’t be closer to the action. 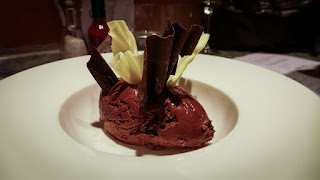 Our meal finished on a high, with the kind of richly dense chocolate mousse you can lose yourself in. From a short but sensible wine list, we enjoyed a bone-dry Muscadet, and a rather fuller but still citrus-zingy Picpoul. Service is enthusiastic and well-informed, although when 10% is being added to the bill some topping up of water might be in order.
In fact, the damage came to a touch under £72. Good fish isn’t cheap, and much of this was very good, so fine. It wasn’t perfect, but, to be fair to chef Laybourne, it was by some distance the busiest day of trading to date. With him at the helm (and presumably with all that talent from Bistro 21 to call on), I expect the rating to rise on my next visit.

Which may be sooner than he thinks. Junior Diner keeps reminding me that next week sees the unveiling of Fenwick’s new Christmas window (yes it’s that time of year already). Now our annual jaunt through the crowds doesn’t seem so daunting: I can look forward to a reward of something bracing and perhaps an oyster or six. This new food hall will be a great oasis from the madness of Christmas shopping.