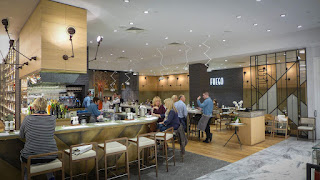 
“I think we’re going to need another couple of minutes,” Mrs Diner said to our waitress, by way of apology.

It was for the best of reasons: being spoiled for choice makes a refreshing change. These days some of the trendiest restaurants just focus on doing one thing well, which takes all the fun out of ordering; so many other places, particularly in Newcastle, over-pack their menus with things I’d happily never see again, like tempura prawns.

“I could happily eat all of this,” I nodded, from behind a furrowed brow. Over the next hour and a half I did my level best to do just that.

With hindsight, the timing of our visit wasn’t perfect. Our visit to this new, shiny restaurant in Fenwick’s new, shiny food hall, coincided with the big reveal of the store’s Christmas window, complete with fake snow being blown off the roof all over Northumberland Street, and a visit from the big man, Santa himself. We had to battle our way inside through an avalanche of screaming elves and their parents, and eventually found the packed restaurant at full throttle.

In keeping with the rest of the food hall, Fuego feels light and modern. A marble-topped bar and an open kitchen dominate the space, while a variety of seating options includes raised communal tables. It was here that we found a perch.

I liked the place before we even glanced at the menu. I liked it even more once I’d read it. You can eat here in a number of ways, from modest snack to full-on dining. There’s charcuterie and cheese and house-baked breads; there are intriguing salads and hot and cold tapas; there’s a pizza oven, and the list of desserts reads like a dream. At the risk of sounding corny, it’s a cornucopia of Mediterranean delights. 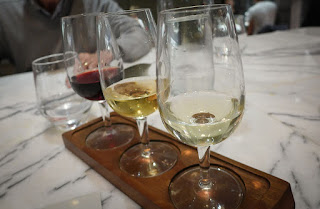 Equally impressive is the wine list. They’ve installed a snazzy Enomatic system, which allows the restaurant to offer wines by the glass they would normally only sell by the bottle. The system fills open bottles with inert gas, preserving the wine for weeks. As a result you can, as I did, try a flight of zippy Sancerre, a decadently perfumed Puligny-Montrachet 1er Cru and a wonderfully concentrated Barolo, at less than a tenner for the lot. It’s a fun way to see how the other half drink, and I heartily recommend it. 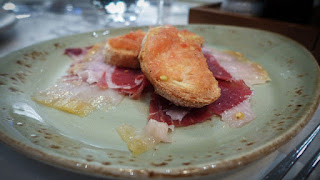 As I can also recommend most of what we ate. Ibérico de Bellotta ham may have been a triumph of shopping rather than cooking, but it was a generous portion for £7, properly carved with a fabulous thick ribbon of melting fat against brick-red acorn-fed meat. 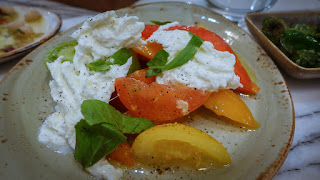 A salad of buffalo mozzarella had variously-hued tomatoes that had been aggressively seasoned, making the most of them late in the season, whilst the cheese was milkily rich. 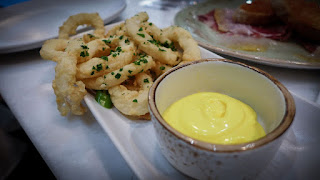 Calamari was crisp and uncommonly tender, though the accompanying saffron aioli could have done with a touch more saffron. 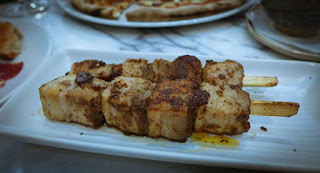 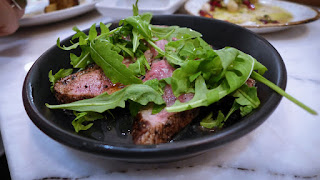 There were no such quibbles about either of the meat tapas dishes we tried. Pork belly pinxos were skewers of excellent tender pig coated in a complex spice blend, while sirloin a la plancha was a timely reminder of how wonderful steak can be when it is good quality, with a proper crust that has been correctly seasoned. We almost mourned the passing of these dishes. 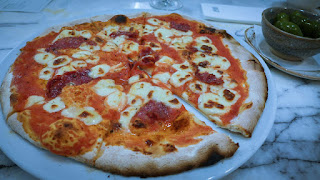 The solitary duffer of the meal, weirdly, was the pizza. I don’t know if they haven’t quite got to grips with the oven yet, but the fennel salami effort we were served was nothing to write back to the old country about. It was advertised as “Napoli style”, but this was nothing of the sort, lacking the soupy centre and fluffy yet substantial crust that distinguishes the real Neapolitan deal. This specimen had a crisp base without any complexity of flavour. Cal’s Own has nothing to fear here.

As I finished off the last of our savoury tapas, I reflected on some slightly uneven pricing. A really quite large plate of fried padron peppers was ours for the meagre outlay of two pounds, whilst it cost a fiver to secure a comparatively dinky

salad of rodunda beans, lentils, pomegranate and goat’s curd. Happily the latter was very enjoyable, brought together by a light dressing that blended rather than bullied the component parts. 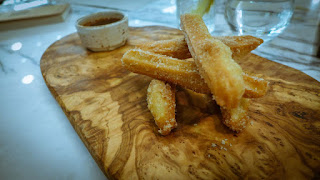 Mrs Diner is yet to meet a churro that she didn’t like, but these were particularly good, greaselessly fried and served with a chocolate sauce whose bitter notes betrayed the use of quality raw materials. I resisted the siren calls of a baklava and an almond and quince tart, before falling for the tiramisu. 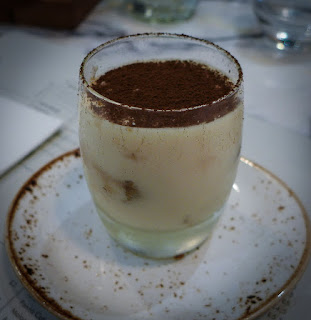 The light eggy cream and coffee were well balanced, and a fine way to see out an impressive and very enjoyable meal. 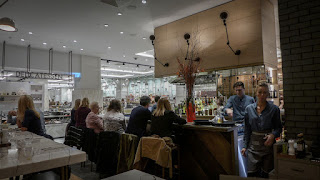 A plaudit is due for the service, which was a model of denim-shirted professionalism. The place was heaving and the kitchen looked as though it was up against it; for so much of what we ate to have been so accurately cooked and delivered to us in good time is very impressive for a new restaurant. They even greeted my farcical over-ordering with scarcely a raised eyebrow.

Our bill, including 10% service, came to just under £95, but this was for an awful lot of food and some very decent wine. The tapas plates are mostly around five pounds, and pizzas are around a tenner. It’s not terribly cheap for Newcastle, but very good value for such quality, especially considering the wine options. 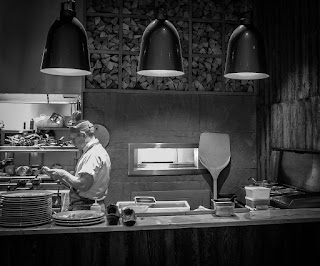 If I was a touch underwhelmed by its Saltwater Fish Company offering the other week, then, at least on the basis of this meal, and aside from the pizza, Fenwick has pretty much nailed it with Fuego.

I’m looking forward to my next visit, not just to put the rest of the menu through its paces, but also to see what treats find their way into that Enomatic machine.