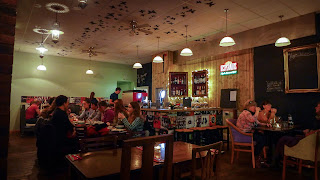 
I’ve always thought it ironic that my flesh-avoiding vegetarian friends choose to eat products that recall the most dubious items from a carnivore’s menu, yet which possess none of their attractions.

Consider, if you will, the basic sausage. It is already one step removed from the thing it once was: meat yes, but in a form so debased from the original that it can, whether in the name of cheapness or deceit, be filled with the least salubrious bits of the beast, so that it ends up scarcely meat at all. 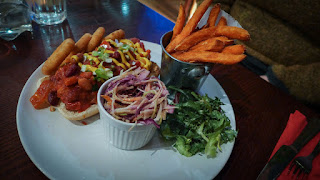 What then to make of the vegetarian - or vegan - “sausage”? It is a fake upon a fake, a lie squared, a copy of something that was already an adulteration. This was my train of thought as I took my first bite of the “Epic Chili Dog” served to us in this newish veggie/vegan restaurant on Pink Lane.

I could have forgiven the conceptual hokum that this item represented more easily if the thing had actually tasted nice. Instead, it tasted of boiled absence, with a weirdly tight-knitted texture, as if it didn’t actually want to be eaten at all. 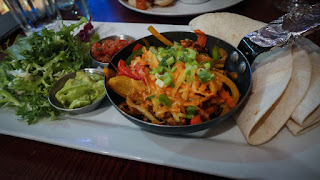 My own main course was rather more interesting, though no more satisfactory. I have not seen jackfruit on any other menu in our city. It’s the latest wonder fad for veggies, the largest tree-borne fruit on Earth, here being used as fake pulled pork. It had been marinated, “pulled”, then plonked into a mini cast iron frying pan along with a bunch of peppers to provide a filling for some do-it-yourself fajita action.

The jackfruit itself had an interesting flavour: savoury, almost oniony. A shame then that there was so little of it, and instead so many dull peppers. But that mistake was nothing compared to the vegan cheese I chose to top it with. This had a bizarre, unspeakably sweet flavour and the claggy texture of tile grout. I confess I don’t have very much experience of vegan cheeses, but after this I reckon I already have as much as I’ll ever need.

In fairness, I should note that The Bohemian didn’t appear to be having a very good night. A large table was constantly being apologised to as the kitchen apparently struggled to get their food out. The restaurant manager seemed harried. As such, firing off criticisms feels like shooting fish in a barrel. Or perhaps harpooning tofu in a barrel. Which, now I mention it, makes me think: why, in a vegan restaurant was tofu not on the menu?

And where, for that matter, were the vibrant salads of robust wintery leaves and toasted nuts? Or creative Asian cooking of seasonal veg such as baby turnips and cavolo nero? Or some mustard-spiked slaw, or a warmingly complex curry? Nowhere to be seen. Instead, we were cajoled to ‘try our “tuna” salad’ (and rarely did air quotes sound more like a threat). 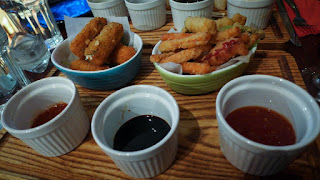 We had tried to pick the more interesting starters, but a grimly vague Tex-Mex theme was in evidence, which made it tricky. More than half the items on offer involved deep frying which, frankly, you could tell as soon as you walked through the door. Cheese-stuffed jalapeños were quite enjoyable and tempura mixed vegetables were perfectly edible, although the batter was as far from being tempura as I am from being a samurai. 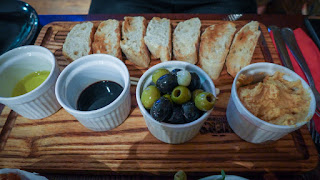 Ordering a mixed “mini mezze” board earned us slices of toasted ciabatta, cheap-tasting balsamic vinegar and olive oil, some olives and - star turn of the night - some really very good hummus that tasted of sesame. 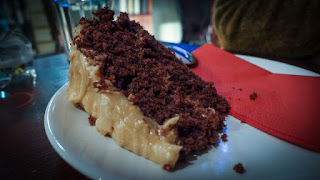 Afterwards we ordered portions of the two cakes available, one of chocolate and the other of lemon. Neither merit much description: they were both shrugworthy.

The Bohemian has a cosy room, with a wooden floor and mis-matched wooden furniture. The office-style ceiling tiles have butterfly stencils. I think there are plans for it to double as a vinyl record shop, so I was looking forward to a carefully curated soundtrack. We got, among others, M People, which seemed to fit the food. Our bill, with a glass of wine and a Pepsi, came to just over £45.

A few weeks ago I thoroughly enjoyed a meal at a vegan restaurant called The Painted Elephant. There the short menu featured dishes that starred real vegetables and weren’t afraid to show it. There were interesting cookbooks scattered about, written by an Irish chef whose work I didn’t know. It felt like the management really liked to cook and eat.

This isn’t the impression we got from The Bohemian, where the menu hinted at a suspicion of food, rather than a love of it. I hope this impression can be attributed to a seriously bad night at the office, but I’m not so sure.