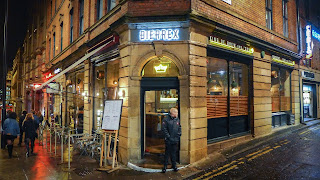 
What is it about the barbecue that appeals so much to the male psyche? There has to be more to it than the primal draw of the flame and the hunger-inspiring aroma of rendered animal fat on hot coals.

There’s something almost masonic about the secret world of rubs, brines and marinades. There are fierce competitions based around the cuisine of the barbie, with grown men fighting for bragging rights over the best pulled pork. I guess that’s why it’s colloquially known as “dude food”.

And yet, even as someone who is quite openly male, I’ve never quite “got it” when eating at smokehouses, at least on this side of the Atlantic. Despite all the hushed talk of meat provenance and special woods, and the number of days that a piece of cow has spent over low, slow heat, I’ve always thought that the results were, at best, not so much better than what I could achieve myself with a decent marinade and a few bits of charcoal in my Weber. Or at least that was the case until our recent meal at Bierrex. 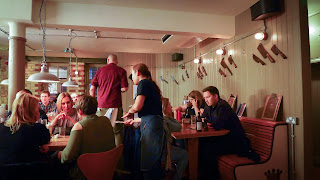 Make no mistake, the offering here comes with a generous side-order of backstory that is like catnip to the meat-marinating millennial male.

As we slid along bare-wood booths that are more sauna than smokehouse, we were handed menus that extolled the wonders of their “Fast Eddy FEC 120 smoker, operating only on wood, simply the best piece of kit for the job”. Try saying that in a voice that doesn’t sound like Jeremy Clarkson - you can’t, can you? 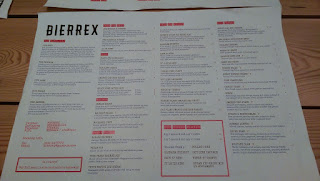 Their chicken is “considered by many the gastronomic equivalent of the famed Poulet de Bresse” and their beef is aged in Europe’s only Himalayan salt chamber. Of course it is!

However, whatever cynicism these windy boasts stirred in me dissipated at the first bite into my rack of beef ribs. A dense outer layer of wonderfully carbonised cow gave way to flesh that was both toothsome and yielding, with pinkish smoke marks running throughout. The smoke flavour was intense but not overpowering; this was great beef.

I had ordered a combo plate of three meats and two sides, which clocked in at the bargain price of £12 (though I see on their website, it’s now gone up to £14, which is still good value). One of my sides contained wings of the aforementioned Goosnargh chicken, thus boosting even further my tray’s protein level. 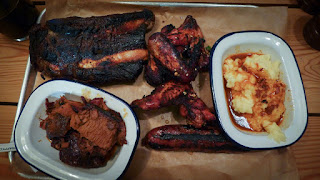 They were also superb, the competing tastes of smoky, spicy and sweet having shrugged and declared their match a score draw, so balanced was the flavour. A slight Asian inflection came via sesame seed and ginger, while the succulent flesh slipped off the bone with scarcely a protest. These wings were positively angelic. Clarkson-speak again.

Other things were good too. Brisket tasted so beefy, it might have been rubbed with an Oxo cube, and arrived in thickish slices rather than “pulled” format. Spiced pork sausages were satisfyingly rough in texture and had sing-song top notes of fennel that managed to make themselves heard through the fug of smoke and tar. Beef fat chips were spot on, or close enough, and “grits ‘n’ gravy” (that’s soft polenta with rich meat juices) were good if you like that sort of thing. Which I do. 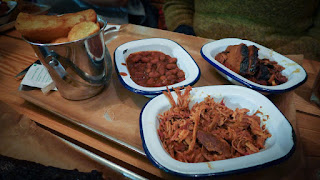 Mrs Diner’s tray brought good but unspectacular pulled pork and some wildly smoky beans with burnt ends to the party. House sauces included a mustard mayo that had something for fans of both cream and tang, and a slightly oversweet bbq sauce. Some spiced vinegar did wonders for the remnants of Mrs Diner’s brisket, which I gamely refused to see abandoned. 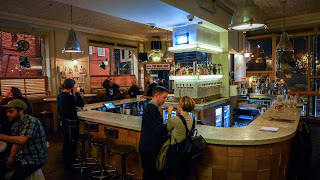 The choice of interesting and esoteric beer is excellent (craft beer is part of the thing here) and cocktails are pretty good too, so you may be wondering, eyeing its 3 star verdict above, where’s the catch? In response to which I have but one word: pudding. 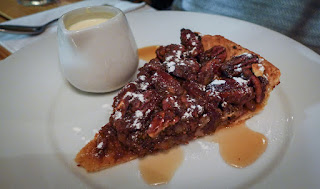 Perhaps they’re banking on people being so full of smoke that they don’t plan to shift many. Maybe they think real men don’t eat dessert. Nonetheless, if they’re going to flog it then I need to try it (such are my trials) and both the available options were utter duds.

The word “pie” suggests a unity, of things having been brought together. The opposite was true of the dull pastry case housing a clump of nuts, bound by nothing more than a trickle of maple syrup. 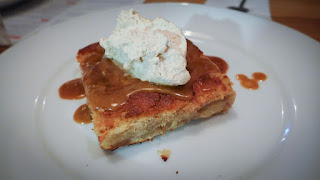 Meanwhile, the recipe for the banana blondie needs chucking in the bin, as this was dry and claggy, and featured none of the promised smoke flavour. Hence: three stars, not four. 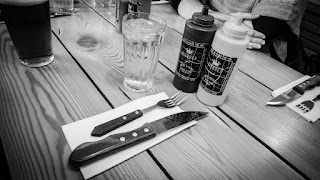 Service started well, but then our food waited on the pass so long I was tempted to fetch it myself, and we felt ignored by the end. Paying the bill was a tiresome effort. 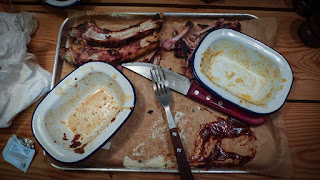 I've actually visited Bierrex once before, shortly after it’s post-Popolo opening. Then I had found the food unremarkable. Perhaps what we tasted this time was the result of them finally getting the best out of that Fast Eddy, or perhaps it was the Himalayan salt that lit the blue touch paper of flavour. Who knows? Either way it was a treat to find pimped-out Americana being done well in Newcastle, and we’ll certainly be going back to make sure it wasn’t a fluke. But we won’t be ordering pudding.