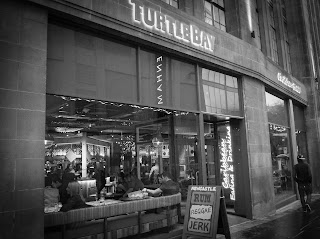 I know several fooderati who reckon that nothing worth eating ever comes out of a chain.

Jonathan Meades regularly - and amusingly - held to this during his days as restaurant critic for The Times. For him Café Rouge was a “Harvester for the indiscriminate middle classes” which “proceeded from the self-fulfilling presumption that no-one will come back anyway”.

Once the virtuous ideal of a dedicated owner-operator sacrificing his life to his food and service has been sacrificed to the money men on the altar of profit then all, apparently, is lost.

My own experience prevents me from agreeing wholly with this view. For one thing, I’ve had my fair share of disastrous meals at the hands of independent operators, and for me one bad meal is as bad as any other. Sometimes a one-off is still one too many. For another, good catering is all a matter of meeting expectations and playing to your strengths, and a chain gaff, if well organised and run, can sometimes hit these criteria as easily as that cute little indy place where you’ve been impressing all your foodie friends.

There have been several chains in Newcastle where I’ve had good meals, like Las Iguanas and, more recently, Byron. And now there’s Turtle Bay. A few weeks into the life of this Caribbean-themed newcomer (the 27th member of this particular chain), Mrs Diner and I visited with a friend of our own; on a Sunday the place was heaving. We grabbed a spot at the bar and ordered cocktails, for no Caribbean meal can begin without rum. 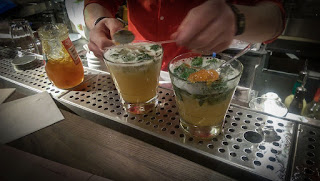 The whole bar list is “2 for 1” during happy hour, and there seem to be happy hours all day, aside from a 7-10pm window, during which sobriety is apparently encouraged. There’s a catch, though: the “2 for 1” rules insisted we both had to have the same cocktail, and although determined to enjoy a bargain, we struggled to reach consensus.

Eventually we settled on the “Jammin’”, because we’d never had a rum cocktail with jam in (it was apricot), as well as mint and ginger. It was refreshingly well made. 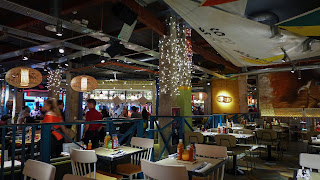 The room looks a bit like an explosion inside the head of someone who loves the idea of the Caribbean, but never quite got round to going there. To say that the assault of murals, surfboards, pictures of Bob Marley and loud reggae music is a bit of a Disneyfication is putting it mildly, but it was so over the top, I quite approved. Sure it’s nothing like the Caribbean I know (and I know quite a lot of it), but if you’re going to go for it then bloody go for it, and don’t leave any cliché unturned.

Then the food started to arrive, and I approved even more. Real Caribbean food (that is, food they actually serve in the Caribbean), sets the bar pretty low anyway, and this was certainly no worse, and in some cases rather better, than much that I’ve sampled on the islands, from St Lucia to Jamaica. 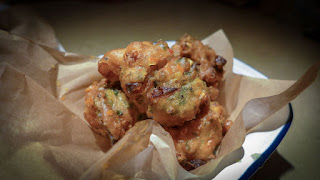 They’ve taken a few key flavours - scotch bonnet chillies, thyme, allspice et al - and set them to work on some reasonable produce, so it was all pretty good. Sweetcorn fritters were greaseless but addictively crisp, the innards having been enlivened with spring onions and coriander. 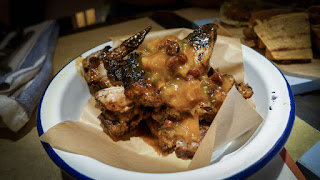 Chicken wings were close enough to ideal: long marinade, slow cooking for tenderness and finally a riotous charring, because fire just makes everything tastier. They came with a sour orange sauce which was sweet without being overly so. 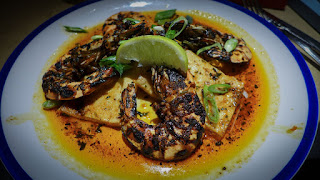 Best of the starters were the jerk pit prawns. Also heavily charred, these came in a spiced butter that was positively ripe with thyme and chilli, and all the better for that. I was glad of the thick tea-towel napkins to clear up the messy denouement. Did you hear that? Real napkins! In a chain? See, it can be done.

Unable to agree on further refreshments, but determined to get further into the Caribbean “vibe” we ordered two more cocktails each, or maybe it was more, including a mojito-type thing made with bourbon rather than rum, which benefitted from some clove liqueur — a new one for me, but medicinally delicious. 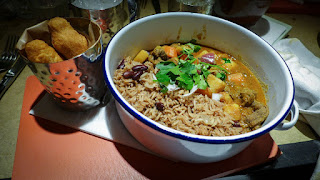 Mains weren’t quite such spot-hitters, but all were decent efforts. My goat curry tasted comfortingly home-made, while our friend’s veggie effort of butter beans, corn and sweet potato in coconut milk (below) was light but zingy. 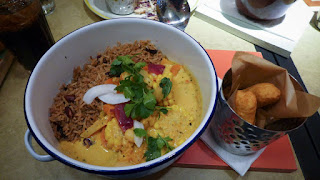 Both of these came with a “Caribbean dumpling” which would have made a fine paperweight, or perhaps a murder weapon, but was less successful as a foodstuff. 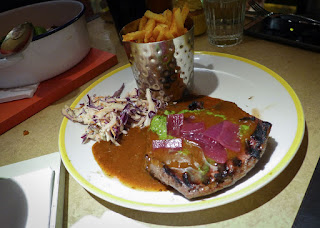 Mrs Diner’s “double-dipped” steak was a last hurrah for the jerk-pit, with good smoke and char being lifted by a vibrantly herby green sauce.

Fortunately puds were no mere afterthought.  A chocolate pot was dense and bittersweet, while a rum-soaked bread pudding was rich and homely.

I wrote at the start that hospitality is about playing to your strengths. At Turtle Bay, that strength is the charcoal grill, and the best dishes we tried certainly made the most of it. It had been used to transform relatively modest ingredients to a state of spicy satisfaction, which is, of course, how much of the food is enjoyed across the Caribbean itself (except in those posh hotels in Barbados, which may as well be in the South of France).

To have this all working properly just a short time after opening is testament to good training, recruitment and systems, something that chains can work on and improve as they expand — if they can be bothered.

There are other quite nice things to say. Service was the epitome of enthusiasm and cheer, from a bright eyed bunch who knew the menu. Prices are reasonable, with starters at a fiver and most mains at £10-12. For rum lovers, Turtle Bay has forty rums behind the bar. This is a pretty serious collection of mid-range bottles, and well worth investigation. Just don’t accept their offer to ruin these by the addition of “Ting”, which is a can of standard pop in pseudo-exotic beachwear.

Above all, it’s a fun place and a good addition to Newcastle’s dining scene. It may be one of 27 across the country, but in our region it’s unique. Until they open the next one, that is.