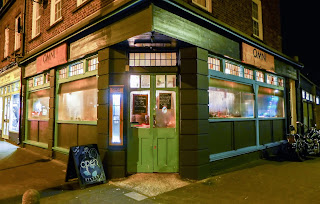 
Sometimes you just know everything’s going to be fine even as the front door clicks shut behind you and you scan the room for the first time. It’s a nice feeling. There are enough reasons to fret in these troubled times without the quality of one’s dinner being added to the list.

As we left a sullen late winter night outside and stepped into the warm, spice-scented fug of Omni, I knew we were onto a good thing. The fact that at 6.30 on a Wednesday evening we only just managed to snare the last table for two was a strong hint. The warm welcome, the lovely decor and the chatty buzz made by people who are really enjoying themselves, all confirmed that this is a place where they really know what they’re about. And what they are about, in the evenings at least, is Asian tapas. 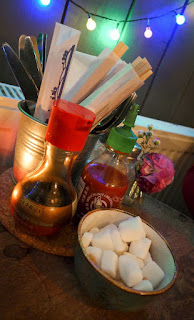 During the day I imagine that this charming bare and stained wood and pot-plant-strewn café - they’re open Tuesday to Saturday, 10am till just 8pm - shifts a lot of coffee and cake, along with a menu that majors on brunchy standards with the odd Asian inflection. But it was the early evening promise of dumplings, broths, curries and spice that propelled Mrs Diner and I on the short hop from Newcastle to Monkseaton. 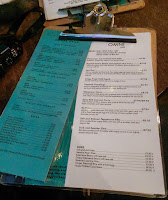 The menu is one of nicely written wonders from which just about anything sounds like fun, with reinforcements offered by way of chalkboard specials. We plumped for a few items from the fryer to get us underway. 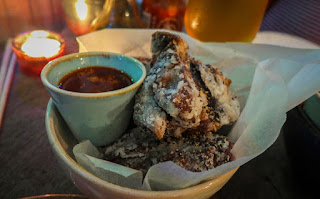 Salt and Sichuan peppercorn ribs were so good as to produce a blast of involuntary expletives on my part, Mrs Diner reminding me with a sharp look that this was very much a family friendly kind of place. Sorry, kids.

Seriously though, they were amazing. The ribs had been slow cooked for eons, before being doused in tingly pepper, salt and cornstarch and lobbed in the fryer, the net result being an addictive crunchy crust. 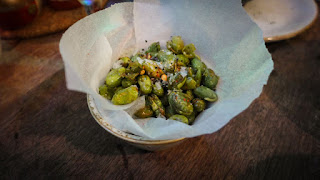 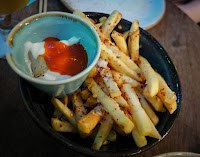 Elsewhere, edamame beans and some slightly bog-standard potato fries had both been showered in a salt-chilli seasoning which made the pitch-perfect pickled cucumbers a necessarily palate cleansing treat. 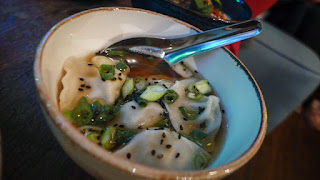 Perky steamed vegetable dumplings in a light broth of sesame and soy were a calming counterpoint to all the zap and thump which had preceded them. The dough on the dumplings could have been a little finer, but these were still very enjoyable, and their slightly rustic presentation left no doubt as to the fact they were made in-house. 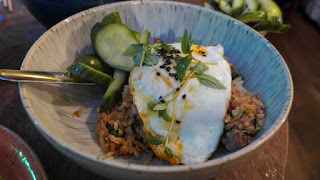 The star performer however was a bowl of Ka Prow, a Thai fried rice dish. Strands of pork shoulder, nestling amongst perfectly cooked jasmine rice, bid each other farewell at the merest touch of a fork; the smoky thump of blackened garlic laid down a sultry bass, while scud chilli and Thai basil played a compelling top part, the whole business being topped by a fried egg whose yolk seeped into the recesses of the bowl. It was as close to perfect as eight quid is ever likely to get you. I would come back just for this dish. Sorry: I will come back, just for this dish. 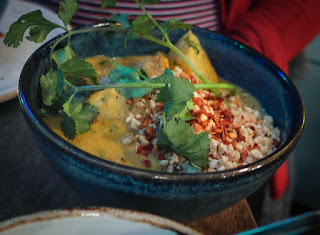 A beef Massaman curry struggled against such illustrious company, but was still competently made. It was smooth and warming, although a little heavy on the potato and a little light on everything else.

All of this arrived within no more than ten minutes of being ordered, despite the restaurant being packed, an impressive feat, but also one which left us unable to face dessert in situ. We picked up a wodge of salted caramel cake, a peanut butter slice and freed our table up for one of the groups waiting patiently, glasses in hand, by the door. 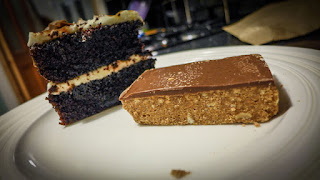 Those cakes, devoured chez nous, once we managed to get hungry again, were enjoyable, especially the light salted caramel spongy effort. The peanut butter slice was a tad dry, but would have been more enjoyable with a cup of tea around midday, rather than bang after a frenetically devoured Asian feast.

We paid around £25 a head for a lot of food and drinks; you could eat very nicely here for fifteen to twenty.

After doing so, you might want to head over the road to Monkseaton Metro station, which nowadays houses a first-rate craft beer and gin pub called The Left Luggage Room. With Hinnies, The Roxburgh and the posh kebabs of Elder and Wolf (more of which later) all within striking distance, it’s enough to make a chap consider moving to the coast.

But back to Omni. The couple behind this venture have really got their game together; from the swoony-pretty Instagram account, the eclectic music, their “gin of the moment” selection, it’s all there. Corrie Thomas is in charge of the kitchen, while partner Louis heads up a small team of knowledgeable staff out front.

It’s rare to find a place so assured and comfortable in its own skin. The whole team here can be proud of what they’ve created so far; they’ve found a niche in Monkseaton and planted their flag squarely in it. Judging by the queue, they don’t need me to sing their praises, but here I am singing anyhow. I just hope there’s still room at the inn when the desire for a steamy bowl of that Ka Prow strikes next.