YOLO - You Only Live Once 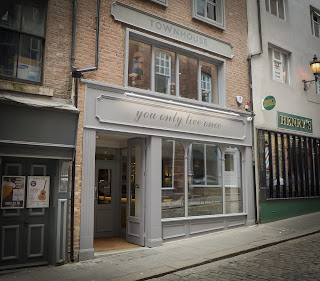 
YOLO Townhouse is set over three floors and is part of a terrace, hence: Townhouse. As I climbed the stairs to the top floor I caught myself thinking “yep, this is a townhouse”.   But YOLO? 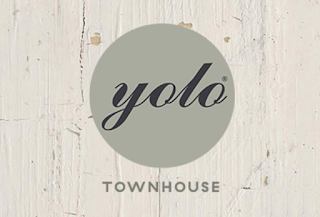 Five or six years ago it was bang on-trend for kids to have this acronym emblazoned over their baseball caps after, if memory serves, the rapper Drake, who released a track that coined it.

YOLO stood for You Only Live Once: time is short, so go on, get another large Chardonnay down you. That kind of thing. So why would a brand new bar and restaurant in a smart townhouse in 2017 want to name itself after a stale yoof slogan from 2011, especially one quite so butt-clenchingly, teeth-grindingly empty and awful? Good question.

Of course, I don’t really mind what a restaurant is called as long as the cooking is up to scratch. But when, as here, it’s a grim imitation of better dishes available elsewhere far cheaper, an annoying name becomes the awful cherry on a cake of woe.

I’m going to do the decent thing and start with the one dish that wasn’t terrible. I ordered a Caesar salad because, being so simple, it’s a good barometer of a kitchen’s capabilities. 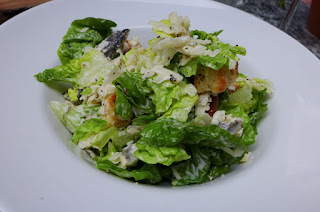 YOLO’s Caesar wasn’t too bad, featuring crisp baby gem, crunchy croutons and a sauce that lacked the richness you’d expect from egg yolks, but still had some punch. The nubbins of parmesan were of poor quality, but it wasn’t the end of the world. Unlike the rest of our food. 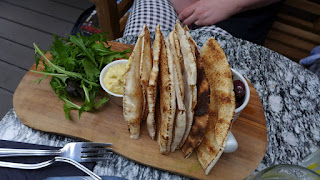 A friend’s “Greek open pita salad” was all out of whack, with 8 huge sails of dull flatbread to scoop up one tiny bowl of sub-supermarket hummus. A few lazily undressed rocket leaves mocked us from the side. 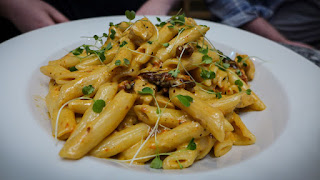 Elsewhere, a bowl of penne pasta with sun-dried tomatoes and chicken was the sort of thing you’d expect an undergraduate to be able to knock up after drunkenly raiding the local corner shop. Although you probably wouldn’t expect him to charge you £8.99 for the privilege. We gritted our teeth and pressed on into this culinary heart of darkness. 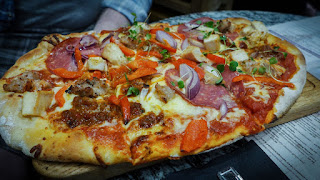 The “YOLO signature pizza”, at £12.99, costs about the same as the most expensive one at Cal’s Own. That’s where the similarity ends. The dough on YOLO’s offering tasted biscuity and dead, the various meaty toppings either dried out, greasy or both. 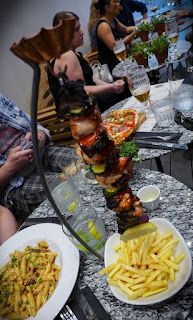 I ordered a 'drizzzling' hanging kebab, mostly out of perverse curiosity as to what the extra z represented, and was rewarded with a giant tower of chicken cubes. As instructed, I poured a vial of garlic butter into the top of the contraption that held the skewer in place. It drizzzled through a hole, over the kebab and onto a plate of chips below. However globs of grease also flicked off in various unpredictable directions, for example into a glass of iced water, where they congealed attractively.

The thing itself was as depressing and infuriating as daytime television, the chicken so dry you could use it to sand timber, the vegetables somehow raw and yet burnt at the same time. The chips and garlic sauce were inferior to those you’d find in almost any chippy in town. Grim, grim, and thrice grim. 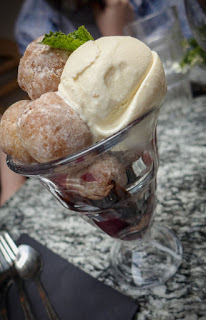 The one pudding we tried was desultorily inept. You can’t mess up doughnuts, right? Wrong! £5.99 bought us a coupe filled with cold, tight little frosted pucks of nothingness accompanied by a scoop of ice cream flavoured with zilch. I’d like the recipe for this dessert, if only so I could take it out the back and burn it; at least then some good would have come of all this. 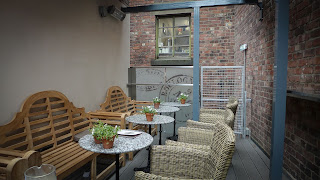 Our waitress was friendly, and pretty much on the ball. Others were less so. Despite there being legions of staff about the place, table service wasn’t offered. Sat on an attractive outside terrace, we alerted a waitress to an impending downpour so that she might extend the retractable roof. She went off to find a manager. Pro-tip: show all your staff how to close the roof.

The manager had a few goes at it before he eventually sussed it out, by which time we were very damp. After the deluge, the roof was pulled back again. During this operation rainwater dripped from it into our glasses, adding to our misery. Nice. 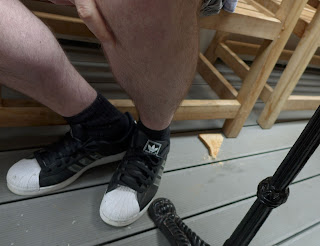 Among other highlights: a slice of toast, presumably from the breakfast service that had ended hours previously, had been left under our table. It stuck to my shoe.

Staff at the bar were chopping fruit for drinks directly onto the bar surface, with no chopping board in sight. Hopefully they’ll get some training before the restaurant’s Food Hygiene Rating inspection.

I take no pleasure at all in slagging off other people's work. However, the blurb on the website says YOLO has the type of food menu you won’t see anywhere else, which is true only if you happen to be profoundly visually impaired. Their something-for-anyone mix of pizzas, pastas, pies, steaks and burgers is as dull as dishwater, and just as commonplace.

Maybe YOLO Townhouse is targeted at people who care more about how their hair looks than the quality of the food on their plate, people who don’t mind paying over the odds to be seen in a nicely finished venue. If that’s you, then dive in. Me? I’ll be a couple of doors down in Kaltur where the food is superb, and prepared by people who quite clearly do care.

Life is too short for a bad lunch. After all, you only live once.