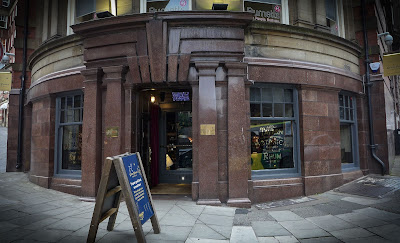 
I think it was Will Rogers, the American actor and wit, who observed: you never get a second chance to make a first impression. I agree: for me, my first impression of a restaurant affects the whole tone of the meal. If I walk into something that looks like the reception of a Marriott hotel, any poor chef is going to have an uphill battle to convince me I’m going to like anything I’m served.

I know I should be more tolerant, but we’re all programmed the way we are, right? It’s evolution’s fault, not mine. So let me admit to you one of my own, deep-seated bigotries: I’m really not keen on themed restaurants. I know, I know: I should give them a chance. But just one look at a menu that features needlessly odd “ye olde” spellings, over-use of the word “curious”, or prolonged and irrelevant stories to justify the fit-out of the place, and my hackles start levitating.

In my defence, this intolerance does at least result from painful personal experience. Time and again I’ve found that the amount of effort a restaurant puts into its theming is in inverse proportion to the care it takes over its cooking. A recent visit to The Botanist in Newcastle bore this out (nice decor, shame about the lunch), as did a less-recent one to the ironically named Dr Feelgood in Sunderland (since closed, unmourned).

All of which preamble serves to underscore what a pleasant surprise was in store when I tried the food at Colonel Porter’s Emporium, a place so rammed with theme I half expected the desserts to arrive on a log-flume.


It’s named after Colonel Jim Porter who, between 1924 and 1927, created Newcastle Brown Ale. Or it says it is, except the decor is doing its best to scream “I’m Victorian!” at the top of its lungs. 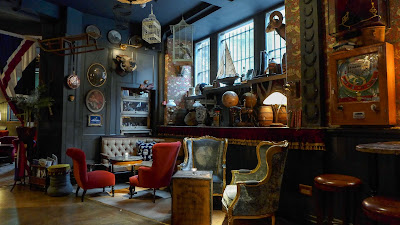 There was a picture of the old Queen Vic herself above our table, while elsewhere Union Jacks, animal heads, bird cages, copper bed-pans, vintage globes, gramophones and a couple of antiques-shops worth of other ephemera loitered around the place. Their website actually uses the words “Tally-ho!” and “Huzzah!” and invites you to book a table by “getting on the old blower”. Trying not to feel physically sick, I ordered, and braced myself for the worst.

And then, as if by magic, some really pretty good food arrived. The first clue was an unbidden bowl of powerfully goats-cheesy popcorn, which I enjoyed in much the same way I do a good bag of Wotsits, which is to say lots. Mrs Diner, who has never really liked Wotsits, left me hers. Bonus. 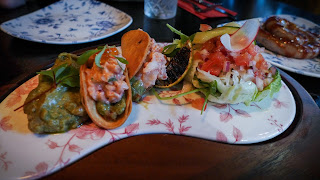 From the bit of the menu called “small plates” (I bet they didn’t call them that in Victorian times/the 1920’s/whenever) lobster tacos were pretty top-hole, crisp corn shell giving way to sweet shellfish, lettuce, tomato and a punchy Marie Rose sauce. Out of sheer generosity I’m not going to mention the weirdly dark guacamole on the side. 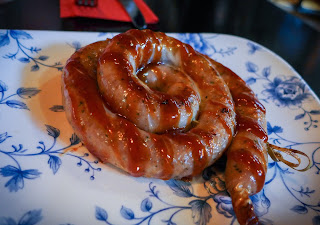 A whole pinwheel sausage was perfectly fine and black pudding bhajis were great too, nuggets of piggy goodness hidden among a tangle of fried onions, with a really delicious cauliflower purée to swoosh the whole business along. 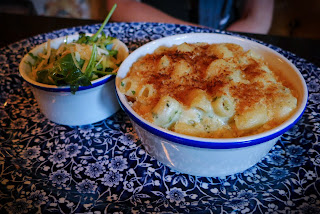 Mrs Diner rather fancied macaroni cheese for her main course. Boy did she get one. A whopping great pot of artery-battering richness had been created out of molten Cheddar, Gruyere and parmesan. I had two forkfuls and immediately felt the urge to renew that gym membership – the one I’d cancelled in 1992. 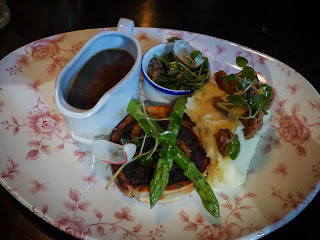 My own “beef roly poly” was a hugely enjoyable combo of long cooked beef cheeks, shredded then baked in suet pastry, served with nubbins of riotously tasty smoked bone marrow, a gravy of depth and heft, and some well made mash which came studded with crisp-fried shallots. Halfway through this powerhouse of a dish, I stopped noticing the jumble-sale madhouse that surrounded me, which is saying something. 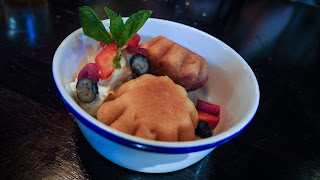 Then I spotted a large selection of rum (sorry, “rhum”) behind the bar, and reasoned that the rum baba on the menu might be worth a punt. Sadly not. It comprised a sad, tight pair of sponges with very little booziness. They’re missing a trick here. With all that good stuff in stock they should be offering a choice of rums, added to the dish at the table. Happily I had already ordered a glass of 15-year-old El Dorado, a sensational spirit from Guyana. 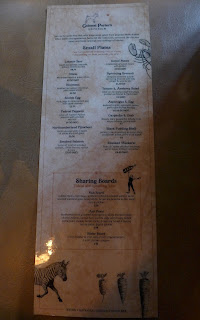 There’s a good selection of wines too: seven each of red and white by the glass. I really enjoyed Featherdrop, a Kiwi pinot noir, which fitted with all that beefiness, while the same brand’s sauvignon blanc did an admirable job of cutting the richness of that mac and cheese.

Service was first-rate from a thoroughly personable bloke whose name I neglected to write down, but who certainly knew his game. We mentioned that the rum baba wasn’t much cop and he dealt with it perfectly, apologising and reducing our bill. If more waiting staff were as confident and competent as this, customers wouldn’t feel so embarrassed about complaining. 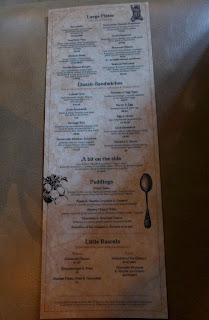 Owner John Adamson, who counts Ramside Hall and Bar Beyond among his other interests, has either spent a fortune at antiques auctions, emptied his own personal stash of trinkets into this place, or both. It might not be to my personal taste, but you have to admire his dedication: when you walk in the effect is certainly overwhelming.

What I admire far more is that he’s clearly installed some very capable staff, both at the stoves and out front. Who knows: if the next meal I eat in a themed restaurant is as enjoyable as this, perhaps I’ll begin to lose one of my longest-held prejudices. There’s hope, apparently, for us all.