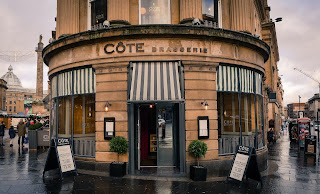 
My attitude towards chain restaurants is ambivalent and ambiguous. It’s all too easy to point an accusatory finger in their general direction and prattle on about how they suck the life out of a town’s dining scene, what with their capitalistic economies of scale, hedge-fund backing and lowest common denominator menus. But, as with most things in life, it’s a touch more complicated than that.

There are, of course, some seriously duff chains kicking about that meet the above description neatly enough, and add nothing to the variety or liveliness of our dining scene. A wander through our bigger shopping malls will acquaint you with some of these overpriced predators. But there are also others who manage to turn out good quality at reasonable prices, and, crucially, offer us something that wasn’t there before they pitched up.

That’s the reason I gave a thumbs up when Byron came to town. On a good day, their burgers are some of the best in Newcastle. It’s also why I was less enthusiastic about Red's True Barbecue, arriving as it did at a point when the whole smokehouse thing had been done to death, and then dug up out of its sooty grave and done once more, just for good measure.

And that’s why I was actually pleased to hear that Côte were moving into the old Barclays Banks in Newcastle’s Grainger Street. Over the past ten years (the first opened in 2007) I’ve visited several branches in other parts of the country and always enjoyed their incredibly cheap lunches (3 courses for £13.50, just like in France) and very good selection of house wines. I really hoped this one would match the rest. It does.


Until very recently, Newcastle, criminally, didn’t have anything that could legitimately call itself a French restaurant. Then The French Quarter opened up near the Central Station, serving tapas sized portions of Gallic delights in a cute venue with excellent wine, and you should absolutely check it out. But if you’re in the middle of town and have a fancying for solid renditions of classic brasserie dishes, Côte is a very good option. 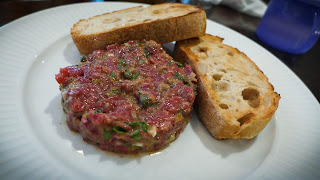 Exhibit A: a really nice steak tartare, clearly made to order, in which the iron tang of decent beef was tempered by the poke and zip of shallots, capers and cornichons, the whole mound lubricated and given richness by egg yolk. There is nowhere to hide when a dish merely involves serving a bunch of raw stuff mixed together, but this version didn’t need to hide at all. 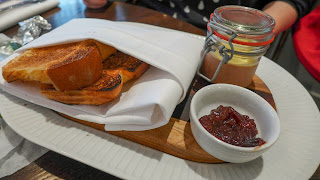 Another classic dish well performed was Mrs Diner’s chicken liver parfait. It tasted almost exactly the same as the one that I make at home, which suggests the livers were lightly fried in a touch of brandy before being aggressively seasoned and forced through a fine sieve. It was certainly smooth, rich and delicious. 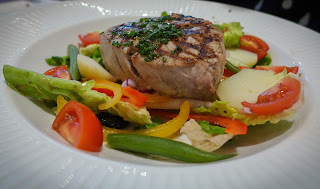 A third: Salad Nicoise. Mrs Diner ordered it for her main, topped with a seared tuna steak. The fish was cooked to the correct shades of rare pink, with an impressive sear on the outside from the grill, the aroma of which found its way to our table before the dish itself, which takes some doing. The salad itself included all the requisite parts, including tender green beans, and was properly dressed, which is half the battle. 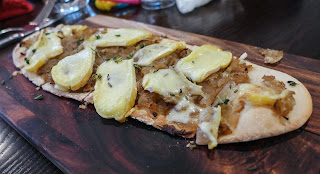 And finally, a classic pissaladière, with properly cooked down and caramelised onions and Reblochon cheese on pita-style flatbread, all perked up with a scattering of thyme.

This venue now bears no trace of its pecuniary past life, but has been transformed into a pleasant if clichéd simulacra of the idealised brasserie. There are marble-topped tables, claret-hued banquettes, tiled floors, pretty lamps and all the rest of it, which is fine, if a little hackneyed. I guess that’s the house style and they’re sticking with it. 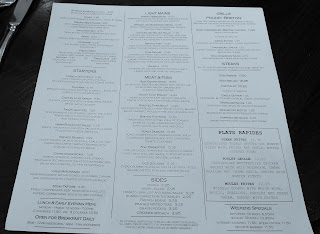 What is better than fine is the fact that they have proper napkins and service which, only a couple of weeks after opening, is so slick and friendly you’d think they’d been there for years. They even go in for that business where one waiter carries the food on a tray to be delivered from it to the table by a colleague. The last time I had that was at House of Tides. Fancy! 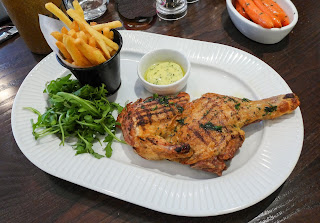 Back to food, where I was enjoying a main course of simply grilled ‘Breton’ chicken, which is something you don’t regularly hear me say about a frequently insipid and dispiriting meat. Côte have got hold of some better than average cluckers. Their menu tells us it originated in Brittany. The most premium French poulet comes from a good hike south east of there, in Bresse, although you’d have to pay a bit more than twelve quid for half a bird to secure one of those. Likewise the Poulet des Landes, which comes from the South West of France and is also very special. The French know how to treat a nice chicken. I was impressed very much by this one’s gloriously crisped skin, although a bit less so by the dried-out breast. It comes with a choice of sauces. Frites were on the money. 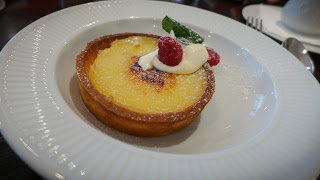 The desserts slightly under-achieved. My lemon tart was soggy in the pastry department and the filling was slightly over-sweetened. 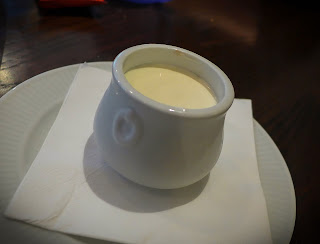 Mrs Diner’s chocolate pot, from the cheaper express menu was nice enough, and that’s about all there is to say about it. 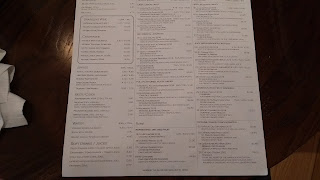 The wine list, admirably, offers 12 options by the glass, and all French. We enjoyed a very refreshing Muscadet and a peachy Monbazillac for dessert. They also offered Breton cider, which is very good. I suggested I stayed all afternoon and let Mrs Diner do the Christmas shopping. I got one of those looks. 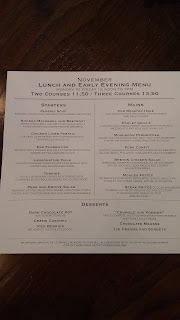 The shorter lunch and early evening (until 7pm) menu offers really great value. But the à la carte is very reasonable too. We spent £76 on a feast of a lunch, including service (12.5% “optional” gratuity will be added to your bill) and wine. They also serve breakfast.

In some chain restaurants you can literally taste the costing-out of the dish, to the extent that it feels like it has been prepared by an accountant rather than a chef. That wasn’t the case here. Everything had good flavour, service was tip-top and, save for the diabolical muzac, Côte was a thoroughly agreable place to spend the thick end of two hours. From nowhere, all of a sudden there are two options for Newcastle-based Francophiles. Santé!