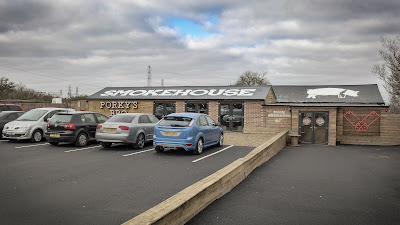 
First impressions can be so deceptive.  Porky’s, just off the A189 in Blyth, shares a car park with a large raw meat vendor called The Fat Butcher and a hut bearing a promise to buy your car on the spot. Handy if you’ve a knackered old wreck you want to trade for a piece of brisket, but not the most romantic of settings.

Pretty authentic, though: in the States, BBQ joints are often to be found on the edge of town in non-auspicious settings. I guess it keeps the rent, and therefore the price of meat, low; and it also stops residential areas reeking of hickory smoke. This car park certainly had a distinctive smell about it. 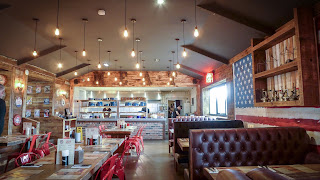 Porky’s is part of a family of restaurants that includes Buddha Lounge and Davanti Classico in Tynemouth. On entering the low-slung brick and wood premises, the welcome was as disarmingly warm as the industrial smokers I clocked next to the open kitchen, which appeared to be fueled by lumps of actual, proper, oak. So far, so good. We settled into a spacious booth and, noting that they used that thoroughly decent Kentucky Bourbon Woodford Reserve, I ordered an Old Fashioned.

My optimism didn’t last long: a tumbler of bourbon arrived, drowned in a torrent of Coca Cola. 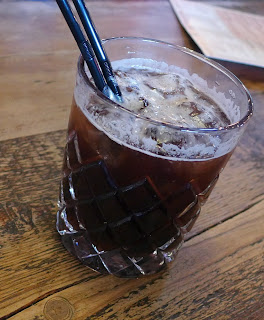 Now then: reasonable people can disagree about some of the finer points of what makes an Old Fashioned – how much sugar, the type of bitters, how long to stir in the ice, orange slice, cherry or not, and so forth - but in no sick world does anybody ever use Coke. Less Old Fashioned, more Old Cobblers.

I took it back to the bar, and was advised “that’s how we make it”. I politely advised them that this wasn’t how I - or any other sane person I’d ever met - drank it, and asked for another, made to the recipe described on their own menu. So: lovely staff, proper wood smokers, but a bar in need of some urgent guidance.

Sufficiently perplexed, we waited for the food to turn up with no idea what to expect. Long story short: it wasn’t great.

Let’s talk about meat, smoke and sauces first, since that is what Porky’s is primarily about. The main problem was that in terms of flavour everything was pretty indistinguishable, being reduced to vaguely smokey, overly sweet utility protein. 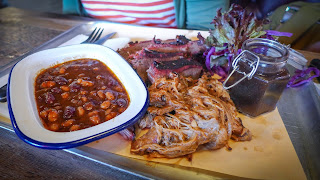 Mrs Diner went for a "combo" of brisket and pulled pork. The former, cut into thick slices, looked good, with its layers of dark bark and pink smoke ring, but was seriously dry. It came with lubricating gravy, but this watery ointment lacked any real meat flavour. The pulled pork was better, but if anything had been taken too far in the other direction, being a mess of sloppy strands. 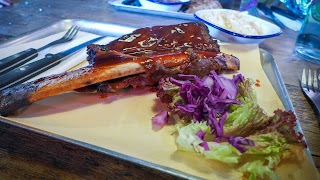 My beef rib was certainly edible, but wasn’t much fun, without smoky depth, or the layers of seasoned-in flavour that I’d expect from a great rub. 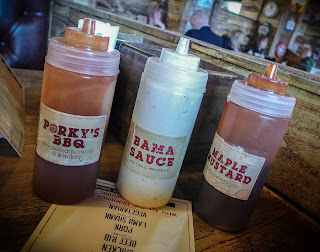 I tried the three sauces on the table. Both the BBQ and Maple Mustard were too sweet and lacked acidity, while the Bama sauce - a slightly watery garlic mayo - brought back memories of soon-to-be-regretted late-night kebab shop visits. I guessed that wasn’t the vibe they were after. The bottles hadn't been filled before service, and the labels were grubby. 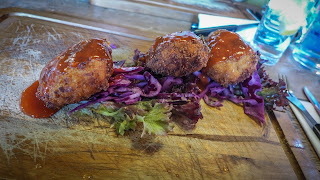 Starters had been better. Pepper Jack’s fritters comprised three massive, uneven globes of breaded and crisp-fried cheese with jalapenos, which were satisfying in a base sort of way. 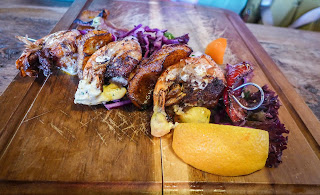 A skewer of king prawns with shells - and legs - still in place had been giving a thorough charring, which rendered them a tasty, if slightly fiddly start to proceedings. 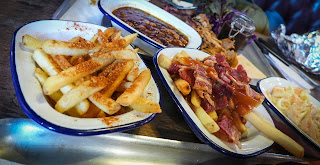 Sides were variable. Drip beans (kidney and haricots I think) had smoky oomph and tang, and house slaw was at least crunchy and fresh if a bit dull, but the chips were bobbins. Maple bacon fries came topped with chewy, uncrisp pig and what I think was the same sauce we had on our table, while the seasoning on a portion of “magic dust” fries was more Tommy Cooper than Penn & Teller. 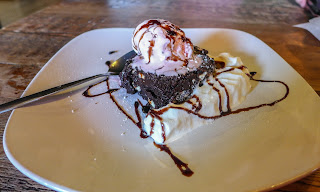 I’d like to think we can all agree that when, in 2018, someone who is paid to cook or serve food in a restaurant whips out a can of squirty cream, he or she should be sent straight back to catering college. Both our desserts came garnished with collapsing worms of sweetened, stabilised UHT dairy. In the case of one, this was a shame, as it detracted from what was a really pretty good chocolate brownie, gooey and rich in all the right places. 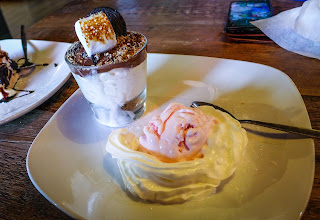 The other, a layered peanut butter cheesecake that was served in a tumbler, tasted like it had been pre-prepared quite some time ago. Not worth the calories, we agreed. 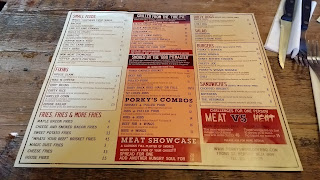 I’d have liked to have given Porky’s the big thumbs up, as I’ve struggled to recommend anywhere in Blyth to date. I suspect the fact I’m not won’t hamper its fortunes. 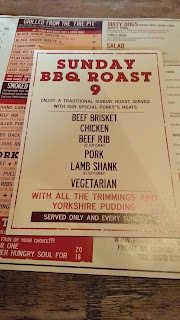 On this particular Sunday - they also do a Sunday lunch by the way - the place was feeding a fair trade of families, all of whom appeared to be enjoying the full yee-haw interior and a soundtrack which was garnered from Spotify list of every song with the word “country” in its title.

I’d so love to find somewhere decent round here: perhaps another visit to The Boathouse is due (I reviewed it quite soon after its opening). Are there any other Blyth-based suggestions?

Our meal here cost £66. I’d like to say that I handed that cash over happily, fortified by some premium low and slow BBQ and refreshed by tip-top tipples, but then I’d only be telling (sorry, sorry, sorry...) a bunch of porkies.