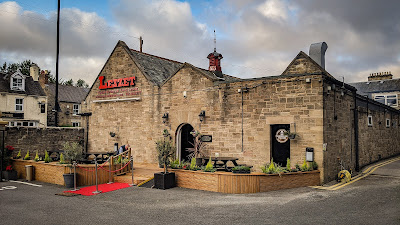 Food ✪✪✪
Ambience ✪✪✪
Service ✪✪✪
Lezzet
Front Street
Four Lane Ends
Benton
NE7 7XE
0191 266 2777
lezzetrestaurant.co.uk
Accessibility? Yes
Gluten free options? Yes
What with one thing and another, there haven't been many new restaurant openings across the North East of late. Fair enough, really. This has meant that since things started to open up again back in July, I’ve taken the opportunity to visit a few that have been skulking around my to-do list for longer than I’d like to admit. It has been fun and interesting and instructive to check out places that have been doing their thing for years, where the paint is entirely dry and opening week kerfuffles are but a distant memory.
I get to hear about restaurants in all sorts of ways. A press release here, a tip from a friend there. I get emails from nice readers very much like yourself, and I even mooch about on Instagram once in a while. The Turkish restaurant Lezzet announced itself to me in a rather more old fashioned and compelling way than any of the above.
My real life (yes, I am a real person) causes me to drive quite regularly along Benton Park Road, past Four Lane Ends Interchange. It is an entirely unremarkable bit of suburbia. However: head past Kwik Fit in the direction of the coast, and breath in. Should the wind be blowing in the correct direction you will be assailed by one of the most wonderful fragrances known to our species, as the impressive extraction kit of Lezzet restaurant belches the aroma of animal flesh searing over hot coal out into the Longbenton air. People around here must be permanently starving. 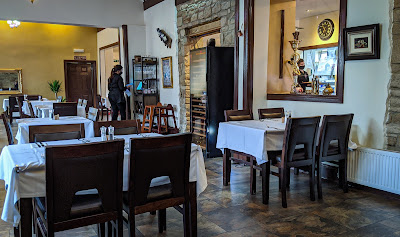 So finally, instead of muttering ”Christ, that smells good, we need to try that place” to Mrs Diner yet again, we actually pulled in, parked up and got ourselves mentally ready to attack mezze and grilled meat. The place is housed in a sturdy length of pale stone. The main dining room is large and spacious. More so than normal, since they’ve removed around a third of the covers. Tables were clothed, seats were comfy, the welcome was warm and Hüsnü Şenlendirici was showing his clarinet who’s boss on the stereo. Nice. 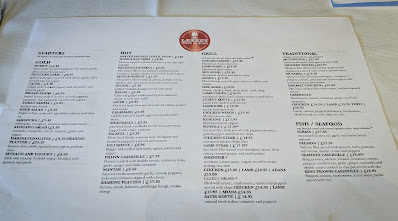 The menu is large, spanning the canonical list of hot and cold starters, grilled meats and stews that you will be on first name terms with from any previous Turkish meals enjoyed in these Isles. 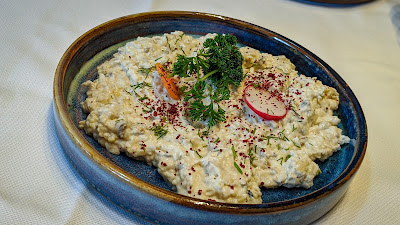 Patlican ezme was your smokey aubergine dip, tamed by yoghurt, but with a fair whack of garlic and tahini about it. This was delicious, as were the wodges of sesame-flecked breads which we used to demolish it, crisp without and steamy within. 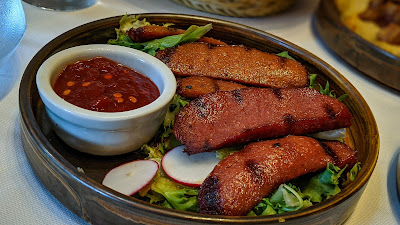 Sucuk, that brick-red sausage I’ve always thought of as chorizo’s cheeky younger sibling, was full of sumac, but could have been charred a little more over the grill. 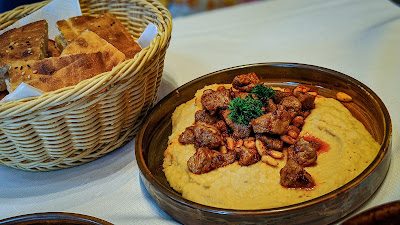 Elsewhere, hummus was fine, but a bit under seasoned and came topped with cubes of lamb which were oddly lacking in much flavour. 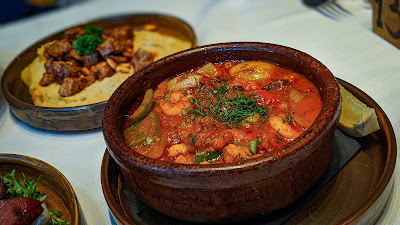 A prawn casserole mezze was better, plentiful shellfish bobbing in a homely and comforting tomato-based sauce which seemed to contain an allotment’s worth of veg. 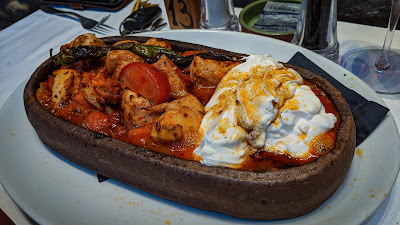 The best thing we ate was a main course of chicken Iskender, in which chunks of breast meat had been kept miraculously moist despite clearly taking some ferocious heat from the grill. They came atop a tomato sauce that tasted clean and light and sweet and which was soaked up by some honking great croutons. An unfussy blob of strained yogurt sat at one end of this moat of rather heavenly food. We saw the last of the sauce away with the last of our bread in a moment of appreciative reverence. 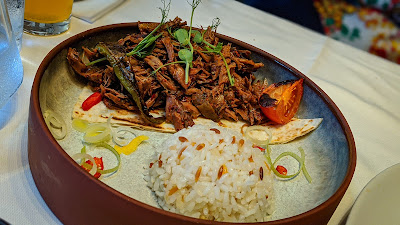 The wonderfully named Tif Tif Tandir, ordered from the separate specials menu was rather less excellent. Again lamb - usually a dead cert in the flavour department - was oddly lacking in, well, lambness. It had been cooked down to shreds along with “Anatolian herbs” which to my palate comprised oregano and sumac. It wasn’t terrible, but just a bit dull and samey. 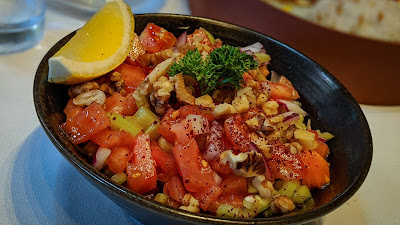 The house salad of chopped tomatoes, peppers, walnuts and pomegranate molasses was refreshing, but made me rather wish better tomatoes had been employed in its construction.
Portions are large and so we debated getting a dessert, but were delighted we did as there was a flourish for a finish. 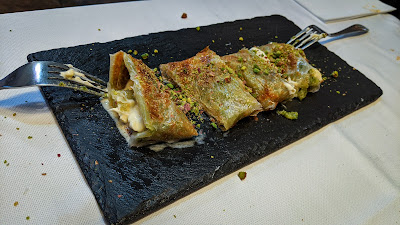 A freshly cooked, unrolled pistachio pancake was brought to the table. This was slathered in clotted cream before being tightly rolled by our waitress and scattered with fresh pistachios. Phwoar and blimey. This, friends, was frigging delicious, if possibly diabetes-inducing. I commend it to you without reservation.
Service was friendly throughout, although on what was a relatively quiet night, we were abandoned to our own devices for a while, meaning I had to get up and track down a waitress to order that pud. Lezzet seems very much a family outfit, and some of those with whom we shared the room were clearly regulars. I drank a solitary glass of Öküzgözü, a red grape with which I will admit unfamiliarity, but which went perfectly well with the tomato-based sauces. Our bill came to £83.
This was perhaps not quite the knockout flavourslam that the unbelievable aromas coming out of the kitchen had led us to expect. Perhaps we didn’t order brilliantly. However, Lezzet is still well worth your custom, doing a range of Turkish favourites in a room that feels like a very comfortable place to be in the current climate. What is more, it will continue to feel that way even as other places who have relied to some extent on their outside areas can no longer do so. 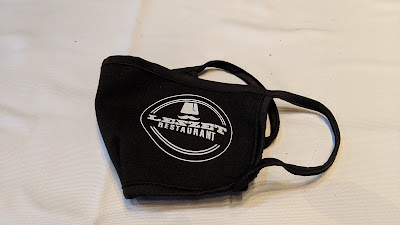 The complimentary Lezzet-branded facemasks we got with the bill were a reminder that everything is still not right. But every good meal in a nice restaurant makes the world feel a bit cheerier, and that will do for now.