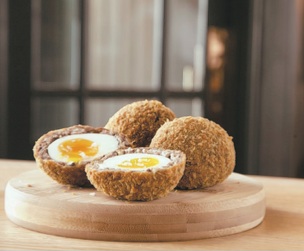 What makes a pub a gastropub? Linen napkins? Mineral water with your pork scratchings? Lemongrass flavoured soap in the loo? Or is it just outstanding food?

Terry Laybourne has almost single-handedly raised the reputation of the region’s food. His 21 Queen Street restaurant won a Michelin star, but the relentless wooing of the guide inspector doesn’t necessarily lead to profits (even El Bulli, the greatest restaurant in the world, closes its doors this month, despite being fully booked for the last 10 years). So Laybourne has spent the last few years developing a range of high quality establishments, which together have made an enormous difference to North East cuisine. His latest is a gastropub called The Broad Chare, right next to the Live Theatre.

You might think there are enough pubs in Newcastle. Some even call themselves gastropubs. This is the only one I’ve found that deserves the title. Downstairs it’s snug and there are good beers on tap (including a hoppy brew from Wylam called Writer’s Block, which I can testify leads to quite the opposite effect). But upstairs, Laybourne has rediscovered the traditions of good pub food – a lost art in this world of well-done roast beef, par-cooked chips and Costco desserts.

The bar snacks sound conventional but are far from ordinary. The Scotch Egg has soft-boiled goo oozing from its herby, crispy-crusted sausage shell. What another pub might called “fish goujons” are monkfish cheeks – so much more moist than the sinewy tail, tender and succulent with crispy light batter. The star snack is a “handraised” pork pie. I had visions of tiny pigs reared on baby milk, but it’s the pastry that’s been handraised, as close to perfection as a humble pie could ever come. 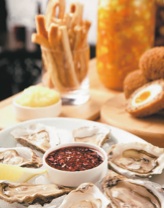 Upstairs there’s a rustic dining room with specials chalked round the room. A different dish of the day at just £11.50 is very good value: my favourite was Wednesday’s braised ham with madeira sauce, but Thursday’s steak and kidney pudding is light and tasty and the fish and chips on Friday are as good as you’ll find anywhere.

It wasn’t entirely perfect. I tried some specials: duck egg on bubble and squeak with HP sauce was nice and comforting, but the butter roasted salted cod with smoked bacon was so unpleasantly salty it made me order another half of Writer’s Block. Maybe that was the plan.

Also, the burgers could be improved: overseasoning was again the villain, and there wasn’t enough beef fat in the mix to make the flavour burst. But they crumbled properly and, vitally, were served medium rare. Never trust a restaurant that won’t serve hamburgers medium rare: that means it doesn’t grind its own steak.

The Broad Chare is more than a pub: it’s the most welcome addition to Newcastle’s culinary scene since Laybourne brought us Jesmond Dene House.