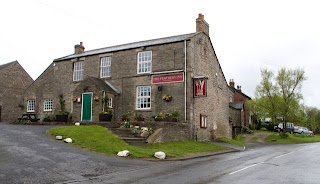 Rhian Cradock has done much to improve the culinary reputation of the North East region. His tiny The Feathers Inn, up above Stocksfield in Hedley on the Hill, has deservedly won accolades over the last four years.

He’s proud of sourcing seasonal produce from across the region and because the suppliers are small, he changes the menu every single day. However, in a tiny restaurant, that’s not necessarily such a good idea.

The Feather’s remoteness (unless you live in Stocksfield, of course) is such that in order to be a destination pub, it must guarantee consistency of cooking. And it’s tough to do that if the kitchen offers seven different main courses every evening. As a result, the meal I sampled, on a busy Saturday night, was variable.

There were successes: beetroot soup with dill sour cream was earthy and delicious, and the home-cured herring was spot on. But our black pudding (with wood pigeon) was tough from overcooking, and the twice-baked soufflé rather ordinary: I think Mrs Kirkham’s delicious Lancashire cheese is a touch mild for a soufflé. However I can forgive Mr Cradock because he served veal. Outdoor ‘rose’ veal is not quite as tender as its white, non-PC, kept-in-the-dark cousin, but Cradock’s poached rump was excellent with creamy herb polenta and a herb salsa.

Also very good was a treat of early wild salmon, but the other mains let the side down and, unfortunately, cost him a star. Grilled pave of beef was well cooked but the toughness of the rump wasn’t compensated by additional flavour I expected of the cut – this beef needed another week of hanging at least. And the lamb was disappointingly bland, the duck fat roast potatoes had been lying about for too long and the carrots were flaccid.

Desserts too were disappointing: I really don’t think the pistachio and white chocolate pot was supposed to be liquid, and the rhubarb on the custard tart lacked tartness. Again, all was forgiven by the surprising sloe gin and blackberry jelly: it had a real kick.

There were other niggles: our table was sticky (it had recently been varnished) and the service was scarcely intuitive: warm white house wine took an age to arrive – a fridge was faulty – and no one offered us water or wine with our main course. None of this would have mattered in a pub, but this is a gastropub, where customers expect just a little more attention.