The Duke of Wellington Inn 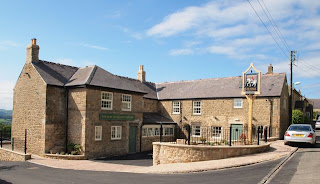 
[RE-REVIEW: October 2011.  Oh dear, Masterchef John Calton has left** and been replaced by a chef formerly at "The Black Bull in Yorkshire".  I assume this means the one in Moulton that specialises in fish.  On my revisit here (just two weeks after the changeover) the starters and mains still had precision and confidence -- the cooking is still the best in the Tyne Valley.
Superbly cooked cod -- no, perfectly cooked, as good as I've tasted anywhere: is that the Black Bull influence?  But desserts have slipped -- apparently since John left a kitchen porter has been promoted to the task (according to our waiter) and, alas, the rice pudding is no longer the buttery nostalgiafest I experienced previously.  Not enough butter, and it was undercooked.  So it's lost a star till it gets its desserts back on track. Still highly recommended nonetheless, but watch this space for further reviews once the new team settles in. ]

** Further news:  in the Autumn of 2013 John Calton is opening a new gastropub on North Shields Fish Quay called The Staith House (in the former New Dolphin pub).  Book now!

The Duke of Wellington Inn at Newton is remote, set high on a ridge between Corbridge and Matfen. But it’s certainly worth the journey – both for the view and the food.

It’s an inn with seven bedrooms, a large bar and a dining room decorated with limed tables and Sue Moffitt’s jolly paintings of smiling cows. The cooking is subtle and imaginative, far superior to anything in this part of the Tyne Valley, and the service is friendly and efficient.

The BBC Masterchef runner-up, John Calton, wasn’t cooking the night I visited, but nevertheless the meal exuded confidence and expertise. The freshest summer salad was neatly punctuated with gherkin and marinated carrots; excellent ham terrine was complemented by a balanced pea puree.

Then we tried two fish dishes. Fresh plaice was panfried on top of interesting range of poached vegetables, including cucumber and radish, and a vegetable nage infused with essence of cucumber. This was special: imaginative 21st century British cooking at its very best.
My grey mullet came thick and moist, with a good risotto of tiny brown shrimp. Around the edge was a thin red line: unnecessarily fussy, I thought, until I tried the most intense roast tomato coulis. Great balance.

The star of the evening was the rice pudding, cooked forever and exuding butteriness – like rice pudding used to be.  Oh, and the soap in the loo is grapefruit, lime and mint.