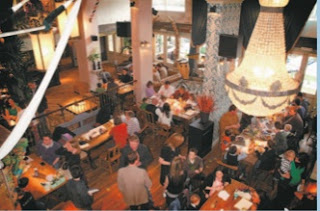 
As You Like It
Archbold Terrace,
Jesmond
Newcastle upon Tyne
NE2 1DB
0191 281 2277
www.asyoulikeitjesmond.com


Before it was cruelly ravaged by the Central Motorway, Jesmond was just a leafy suburb of respectable Victoriana: Newcastle Posh.
Insulated from the West by the Town Moor, and from the East by the woods of Jesmond Dene, its excellent schools and genteel atmosphere have always attracted well-off professional families.

Then the students descended and many of the larger houses were converted into bedsits. With them came a different atmosphere. Osborne Road, formerly a residential terrace with the odd small hotel, became the loud, lively symbol of the new Newcastle, where students, glitterati and wannabes could mingle for a night of fun. It’s still a nice place to live, but Jesmond now has the atmosphere of a cosmopolitan village: it’s Newcastle’s Hampstead, with expensive boutiques and outdoor cafés. It also has some smart restaurants: so I secretly went to try them.

My tour began in Archbold Terrace, which, since 1973, has mostly consisted of an ugly concrete office block. In one corner sits As You Like It. A lot of them clearly do, for, as I arrived, crowds of young women jammed into impossibly tight skirts were tottering up the stairs.

Despite its forbidding concrete exterior, inside it’s like a glorious Aladdin’s cave. There are three vast floors, with bars, live music, and filled with what felt like a thousand partygoers. We were led up to the restaurant by a friendly Irish hostess, who brought us to, quite literally, a four-poster bed. It’s an old Indian canopy, in the centre of which is a wooden table. It was all absurdly romantic – table 45, in case you want to book it for Valentine’s Day.

I can see why this place is so popular.  Fun, noisy, with some of the friendliest and best-trained staff I’ve encountered in Newcastle,

its atmosphere positively buzzes, despite the naff pop music, which places it back into the 1980s. We were quickly mellowed by properly made cocktails – a Cosmopolitan for my wife, a Marguerita for me, then we ordered wine from an imaginative and comprehensive winelist: familiar wines are paired with more unusual alternatives. By now, I would have forgiven it anything. Except the food.

Oh dear, we so wanted it to be good. But from the moment my “Korean” prawn arrived on top of its “noodles, pickles and Korean chilli bean sauce”, it was one disaster after another. The noodles were stone cold, greasy, and bizarrely accompanied by tiny florets of cauliflower, and cubes of courgette and carrot – all raw, not pickled. It was like the vegetarian option on an economy flight.

Meanwhile Mrs Diner had Buffalo mozzarella, with peach and chilli salad with red pesto. It sounded appetising, and, like my prawn, the mozzarella was of good quality, but it was utterly destroyed by a gunk of “pesto” dropped on a green salad with a few sad peach segments. This was cooking at its laziest.

Our spirits were lifted by an entr’acte – “Something special in between”, which was a tiny sorbet, onto which our waitress poured a fantastic concoction of gin, Midori (green muskmelon cordial) and sparkling wine. After that, it seemed a shame to spoil the atmosphere by eating the next course. I thought “harissa spiced lamb skewers with a Greek style salad” would be a safe bet. The lamb was tender enough, but had scarcely met its harissa dressing, let alone been spiced by it, and the salad had no hint of Greece that I could detect other than a big slice of pitta bread dumped on the side.

Mrs Diner fared even worse: she adores swordfish, which was “special” that night, but it arrived dried out, skewered with a prawn and dumped onto the same “Korean” noodles I’d scorned in my first course. Desserts featured indifferent Eton mess, but the kitchen’s one saving grace was possibly the best and lightest chocolate brownie I’ve ever eaten. If you ever eat at this place, I recommend starting with Something In Between, and moving straight to the brownie. It wasn’t particularly good value either, at £16 for a main course.