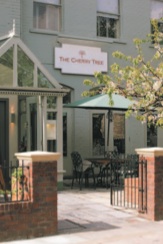 
[The Cherry Tree closed its doors in October 2017]


Halfway up Osborne Road in Jesmond is The Cherry Tree. This has a good local reputation and a friendly, but quiet, atmosphere. It also has jazz on Monday evenings, which was a stroke of luck for us. The staff are terrific, but the cooking, like the pretty young musical theatre singer who joined the jazz trio, was attractive, talented, but variable in execution. 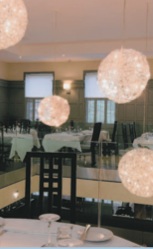 Our two starters were Caesar salad and prawns piri-piri. These should have been safe, but the Caesar had little gem lettuce instead of romaine, brown anchovy instead of white, and there wasn’t nearly enough dressing to cover the lettuce – little gem’s leaves are thicker than romaine, which is why they shouldn’t be seen in a classic Caesar. And I don’t know where the piri-piri went, because the prawns had no spice to them whatsoever.

Our main courses were much better. I had a really tender, slow-cooked pork belly, with a crispy five spice coating, and my wife’s lamb chump was perfectly pink, though the peperonata was a little bland and the tasty basil polenta might have been better crispy.

For dessert, we tried the apple streusel (not struedel, as the waiter insisted -- Streusel is German crumble, Struedel is German pastry) and the saffron egg custard tart with blackberry compote and blackcurrant ripple ice cream. The apple was very pleasant, supported by liquorice ice cream. Although the egg custard was spot on, the pastry was just a little too thick and stodgy, the blackberry compote was delicious but too cold, and the blackcurrants were less ripples than globs in the ice cream (nice globs nonetheless).

Overall, though, there was nothing to surprise: it was a menu you could have enjoyed in any middle-aged restaurant ten years ago. In 2011, it felt rather predictable.