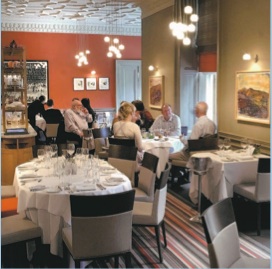 
[Re-reviewed in June 2011:
The bad news is that chef Pierre Rigothier has left to join Helene Darroze’s Michelin-starred restaurant in Paris as chef des cuisines. The good news is that the standard hasn’t slipped with the promotion of his sous-chef Michael Penaluna – indeed, on my revisit, I was even more impressed with the imagination and precision of the cooking.  Still the best value lunch in town.]

Several years ago I endured an old fashioned and overpriced “tasting” menu at Jesmond Dene House. It was a meal with more presentation than flavour. 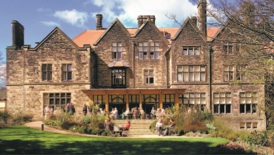 The house, arts and crafted by Dobson, Shaw and Rich, is a beautifully restored treasure. Now it has a chef to match: Pierre Rigothier. He has emerged from the shadow of Terry Laybourne into a truly gifted creative, and has transformed the food.

He offers the best lunch bargain in the north: a two-course menu including coffee and petit fours for £16.50, or £19.50 including wine. There’s also a Market Menu at £19.50, and you can mix and match the two.

The twice-baked broccoli soufflé exploded with flavour, set on thrice-cheesy sauce and the liquorice scent of chervil.
The pork terrine was spiced up by proper pickles. Many different fish died for the fisherman’s pie, served with choucroute on the side. The squid risotto was intense, the split pea soup a flowing moat of peaness encircling a little tower of carrots and pancetta, and the belly pork on lentils and macadamia nuts, with tiny confited pieces of duck gizzard, was spectacular. Those were just the starters. 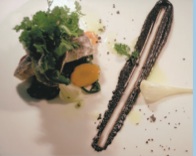 Grey mullet sat in a lemongrass beurre blanc with pork fat spread like gossamer over its green beans; there was tender guinea fowl and seared liver: it was all serious cooking. But the real star was the steak and chips. The chips were crisped to perfection in beef dripping and the steak the best you can buy: Tim Oliver’s. Tim is a farmer from Great Whittington near Corbridge, who recently paid a record 7,500 guineas for a Belted Galloway bull. You can only buy his meat in one place: Dobbies in Ponteland (I know it’s a bizarre location, but trust me).
There, right at the back, is a secret butcher’s shop. Ask for Gary and tell him you want some of Tim’s Galloway beef. You’ll never shop elsewhere again.

Pierre Rigothier is in serious danger of picking up his first Michelin star*. It would be nitpicking to complain that his bread’s too chewy and his mashed potato starchy: his lunch is the best in town. I just hope the price survives when he’s booked solid every day, as he deserves to be. So please don’t tell your friends. Let’s keep it a secret, eh?