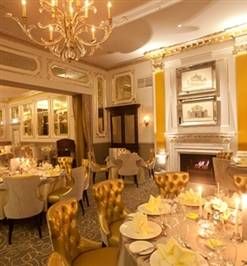 
This restaurant is undeniably silver and gold, though that isn’t an accurate translation of its name. Argent D’Or could mean “golden silver”, except the French wouldn’t use the capital D. Or perhaps it’s “silver gilt”, like second prize in the Chelsea Flower Show. Close, but not gold. Which is quite appropriate, when you think about it. 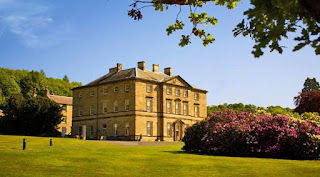 Close House is an attractive country house hotel with two golf courses. They’ve done it up nicely, but in the restaurant someone let the designer go bonkers.

More outrageous than stylish, it would be a fantastic room for Elton John’s wedding reception.

Any bride would feel like a queen surrounded by these giant mirrors and chandeliers, silver chairs with gold seats. Mrs Diner and I, out for a quiet dinner, felt we should have worn sequins.

I feared that the chef wouldn’t be able to match the excitement of the décor. I was right.

It started well: there was a talented mixologist in the bar where we sat and ordered martinis. Unfortunately, the drinks hadn’t arrived at our table before someone turned up with tiny glasses of warm secret soup.

I say secret, because no one could tell us the ingredients: not the person who brought them out far too early, nor the maître d’ who didn’t bother to go and investigate when we asked him.

The soup was tepid by the time we tasted it (we didn’t want to spoil the seriously good cocktails), but I guessed spinach, and it came with little handmade crisps.

I wonder why the kitchen kept the front of house in the dark. Maybe they’d had a row.

There are two prices: reasonable and expensive. There’s a £29.95 “seasonal tasting menu”, which is not a tasting menu at all, because it’s £27 for two courses or £30 for three. Whereas the House menu is £45, but still only three courses. You can mix and match, but have to wait for the bill to learn the consequences.

The service is at once friendly, enthusiastic and amateurish. Mrs Diner noticed the unironed tablecloths. Thrown on wrinkled from the machine, their coverings hadn’t been pressed either. When we ordered glasses of house red (an acceptable Malbec), we had to ask the waitress to remove all the superfluous glassware cluttering the table.

And when our glasses were empty, no one offered us more. All basic stuff for any restaurant aiming for gold.

The food, like the service, was undisciplined. Dull bread rolls preceded good beef carpaccio, served with more little crisps, which were actually soggies.

It was garnished with over-sharp pickled carrots, and horseradish cream that was too creamy to deliver bite. I had scallops that hadn’t been properly coloured, though they were neatly arranged with curried raisins.

By contrast, my halibut was seared nearly to death – innocent white flesh turned to orange crust. But it arrived with an inspired piece of shredded oxtail and some monkfish cheek.

Mrs Diner had chicken from the “tasting” menu and was rewarded with almost no taste at all: served with seared but unseasoned lettuce, stodgy gnocchi and frozen peas, it was beyond bland.

Our tastebuds finally came alive with dessert: pavlova with orange zest cream, rhubarb and fresh blood orange. Rice pudding was paired with prunes that, like us, needed alcohol – no one offered us dessert wine, so we made do with a nice homemade Garibaldi biscuit.

Argent D’Or failed to make the gold standard, and is certainly not worth £45 a head. It’s a shame, because it has much to be admired. Glamorous decor, smiley staff, and a chef that’s at least giving it a go. Close, but not quite there yet.