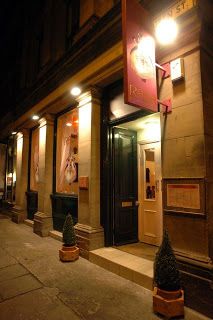 [NOTE: RASA shut its doors at the end of October 2015 and immediately reopened under new branding but the same team - it's now called URY.  Not an attractive name - it's derived from a traditional cooking pot, apparently.  Hopefully the food will be as attractive as Rasa's]

Das comes from Cochin in Kerala, deep in the south of India. It’s a beautiful fertile region specialising in vegetarian dishes and fish, a culinary universe away from the chicken tikka masala of the Punjabi, Pakistani and Bangladeshi curry joints that proliferate our streets.

As the awards and accolades grew, Das’s empire expanded until he had seven in London. Then he opened Rasa on Newcastle’s Quayside. Soon he’ll be bringing coals to Newcastle, as it were, by opening a restaurant back in India. 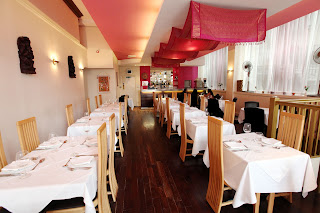 They all offer wonderful vegetarian food, but most have great seafood, and some, like Rasa, have meat. Also, they are all very pink.

Now for those of you who think good curry is a chicken vindaloo with pilau rice, this might not be your kind of place. Rasa is something special.

They fly in kingfish from Cochin every week. All their chefs are trained in a special academy in Kerala. The staff don’t just care about food, they love it with a passion.

Not just the chefs, the waiters too. In Newcastle they recently brought in a chef from Thalassery, in the north of the state, where they reputedly invented the biryani. Ansar, Rasa’s charming and efficient manager, proudly announced that the chef had decided to make an authentic chicken biryani that night.

Mrs Diner and I couldn’t resist, and he presented it with a flourish and a little side dish of spicy coconut chutney. Both were fragrant and delicious. Then Ansar revealed he had made the chutney himself, having rung his mother in Thalassery to get the recipe. Rasa is that kind of place.

It is food made with love, for those who love food. One of the highlights of the Keralan year is Vishu, their New Year, which happens in mid-April.

Last Sunday lunchtime Mrs Diner and I joined the celebrations at Rasa. The place was packed with families. Children ran happily between the tables where they placed in front of each guest a traditional sadya banquet, served on a huge fresh banana leaf. 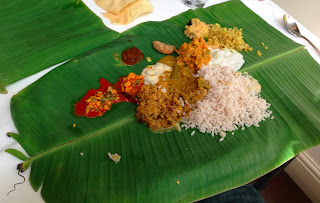 You traditionally eat with your right hand, mixing wet food into the brown rice, though they took pity on the Westerners and gave us spoons.

There were around 20 dishes in total dotted on the leaf, for just £15, including sweet banana biscuits for the kids and the spiciest green mango chutney and lemon pickle. Each dish painstakingly made by experts; together they made possibly the finest Indian meal I’ve ever enjoyed.

You’ll have to wait till Onam, in September, for their next public banquet (though they will create one for large parties, for around £20 a head), but I highly recommend the restaurant at any time of year.

Stick to the vegetarian and fish dishes on the menu and you will have, for the first time, a true taste of southern Indian cooking. It has nice cutlery, proper napkins and masala dosa to die for: easily enough for a 2-person starter for only £6.50.

Whatever you do, order thakkali payaru – black eyed beans in yoghurt with tomatoes ginger and coriander (£7.50). Oh, and the kingfish: as they’ve taken all the trouble to fly it in specially, you can hardly not sample it (£9.95).

Service is always immaculate. Newcastle is very lucky to have this place.