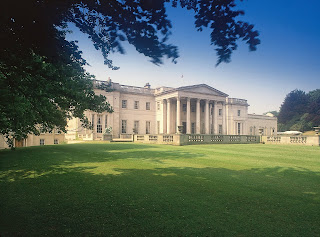 
Wynyard Hall is a pompous pile.  A tribute to Victorian ostentation, it’s a very stately home, set in 150 acres of parkland and built for the Marquess of Londonderry, who reckoned that a proper Lord needed somewhere big to show off. Over the years, it has hosted royalty, politicians, aristocracy, generals, and now a secret diner.

A few years back, local entrepreneur Sir John Hall spent millions restoring it, then helped his daughter turn it into an impressive country house hotel. The Duke of Wellington had been a regular guest, so the restaurant has taken his title. 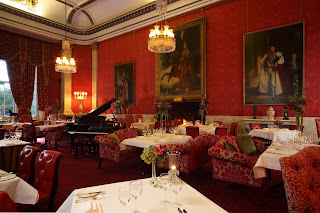 It’s very red, whereas the lounge bar, called the Library, is very green. It’s all so palatial, you might think it would be hard to create an ambience. You’d be right.

It reminded me of a silent, stuffy London club. Except that, instead of crusty archbishops and politicians, most of the clientele appeared to be middle-aged golfers.

Mrs Diner and I went for dinner, two of just 13 covers booked into the enormous red dining room.

Poor Alan O’Kane: this is a tough venue for a creative chef. Ostentation hangs over the room like a dead weight. There are no fresh flowers on the tables, and old portraits eye the reproduction furniture with disdain. Any food would have to shine to relax diners sitting here, their voices hushed by the opulence of the setting.

Somehow O’Kane has managed to attract 3 AA rosettes in the two years since he inherited Wynyard’s formerly appalling culinary reputation. I don’t want to belittle this achievement, and he is a very creative chef and probably deserves the accolade, but any guide inspector that gives only one rosette to Bistro 21, Café 21 and Marco Pierre White’s, whilst awarding two to Close House and three to Rockliffe Hall, is either easily seduced by stately homes or severely lacking in the palate department, and should probably stick to mending cars.

To make such an imperious atmosphere customer-friendly would require amazing front of house service. Sadly, there was none.

We arrived in an empty hall and had to seek directions from a disinterested receptionist, then wandered lost through three vast rooms before encountering a manager who asked, “Is there anything you need?”

To which I nearly replied, “A member of staff to greet your customers.”

She didn’t offer to take our coats, but led us to a table at the edge of the room near a closed piano. I'm sure they didn't treat the Duke of Wellington like this.

Canapés scarcely lifted the tone. Chicken skins with chicken liver parfait and fennel pollen, some whitebait in need of devilling and cold cheese puffs lacking the warmth of a sharp cheesy core, or warming.

But the menu was certainly interesting, the wine list varied, and the service, when it arrived, was friendly, if rather naïve (like wine glasses placed on the left, and some confusion about which side to set the fork).

So to the food.

I started with a mosaic of duck, foie gras and Morteau sausage.
It wasn’t the most elegant construction – bricks laid on edge rather than fine marquetry (compare Gordon Ramsay's version of the same dish on the right) – but the duck and goose were good, and the smoky, aromatic sausage was a treat. Alongside, tangy little cubes of chamomile and sauternes jelly stood to attention, topped with bean and the thinnest shavings of radish and truffle.


Mrs Diner had fresh mackerel, which needed a touch more scorching, but was nicely set off by beetroot, watercress and spicy horseradish.


My main course was very good too. Turbot, oyster mushrooms and oxtail always make great partners, and batons of salsify added oystery sweetness to the mix, though the presentation was rather cramped by a small white plate.

On a room of this scale, O’Kane should experiment with finer crockery to distract from the relentlessly red décor: he only used small heavy plates, some green and black – that’s no way to show off his talent.


Mrs Diner was rather disappointed by her belly pork, braised in master stock, though it was accompanied by an excellent salt-baked pineapple, some spicy shredded kimchi, and a really smoky scorched prawn.

Master stock, infused with star anise, soy, citrus, and only the Chinese know what else, should have given the meat an oriental fragrance, but instead it tasted just of pork.


Desserts were less successful. I had a lemon mush of drizzle cake, little meringues and lemon sorbet, whilst Mrs Diner had a gloopy rice pudding purée overshadowed by an overspiced pear.

The presentation, on the same chunky green plates, was messy.

Now you’ll notice I’ve awarded this place 4 stars. That’s because, despite all the hurdles, Alan O’Kane is ambitious and highly competent, and there was much to enjoy. He deserves more than 13 covers – and some better crockery. I would come again for the food - but only with a big party to cheer up the ambience.