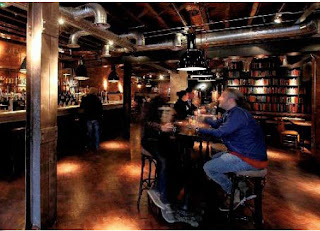 My first Secret Diner review, back in 2011, was the newly-opened Town Wall pub.

I’m afraid I was underwhelmed by both food and service, but I liked the exciting, modern conversion of an historic building. It had something that many Newcastle venues lack – style.

This week the owners, Dave Stone and Rob Cameron, unveiled their second converted pub-cum-eatery, directly underneath the Tyne Bridge. It’s called The Bridge Tavern (although its old Newcastle Arms sign is still carved in the stone outside). I predict it will become a huge success.

It has the brick walls, quality wood floors and industrial ceiling of its larger sister, but it’s also welcoming. And, at the far end of the room, there’s a real microbrewery.

The first of its kind in the city, you can sit and watch Joe the brewer creating unique 360-pint batches of ale just for the pub. A beer-drinker’s paradise, the brewery is a joint venture with Wylam, makers of the award-winning Gold Tankard, and they even have beer-tasting planks so that you can compare the brews.

Joe told me he was still experimenting with the new kit, and he’s never quite sure how each batch will turn out. He’s being modest: I had a delicious ale called Smuggler’s Mist, with overtones of lemon popping through the hopping. In fact, I could have tried them all, but I was technically there for the food.

This time the owners have taken no chances. Realising that they needed to aim for the culinary heights of Terry Laybourne’s The Broad Chare, they’ve stolen its sous chef, Tony Renwick.

Sure, the menu is more comfort food than fine dining but, just like the Broad Chare, it is imaginative, with local, seasonal twists. This is a proper gastropub, and only a week old.

We opened with pig’s head croquettes, wild mushroom and spelt fritters, and crispy lamb’s belly. They call these bar bait: to hook you into the beers, presumably.

All three were similarly breadcrumbed, but fun and original, served with different dips, like mushroom purée, and a very nice onion and caper mayonnaise.

They also offer Lindisfarne oysters, sweetly pickled vegetables, and sharing planks of meats and fish, together with mini beef and pulled pork sliders.

There are light dishes of salads (like crab with sweet golden beetroot), whitebait with spicy sriracha mayo, and Renwick’s signature haggis toasties, with a soft quails egg inside, but this Secret Diner doesn’t do light.

So, after our bar bait, we ordered (via the bar – there’s no waitress service, though the staff were very friendly and helpful), haddock and chips, beef and ale pie, and both beef and venison burgers. I think the kitchen may be having teething problems, because everything took an absolutely age – we were glad of our appetisers.

The mains eventually arrived with a stray roast lamb rump, beautifully pink, but which sadly hadn’t been ordered. It looked so appetising, I raised my fork to dive in, until an apologetic waitress snatched it away and replaced it with my beer battered haddock. 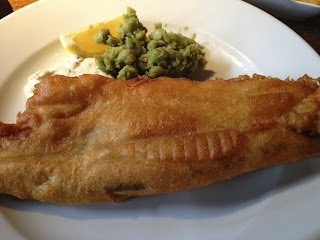 My disappointment lasted but a few seconds. This fish would have given Colman’s of South Shields a run for its money – in fact it could win an award for best haddock served in a pub anywhere in the world.

I wrote down all sorts of fatuous comments – succulent, moist, fresh – it was indescribably good, with marrowfat peas, some whole, others mushed into a gorgeous minty mess, with Stokes’s ketchup on the side, tasting of real Italian tomatoes. I will think about it every time I want fish and chips.

The generous beef and ale pie, served with bright green, crunchy savoy cabbage and lightly puréed potato, had a thin, suety crust, and was full of the tenderest beef and carrots, but lacked seasoning.

Both the venison and beef burgers were on the mean side, but the beef had a good proportion of fat for flavour, and was topped with sharp Keen’s cheddar and sweet cucumber, rather than gherkin.

I ordered this medium rare but it arrived medium, which could have been down to the delay, but the kitchen gets points for serving pink hamburgers at all – so many just keel over, fearful of our absurd health and safety ogres. The venison was strong and moist, with blue cheese and pickled walnut.

With its upstairs bar and heated outdoor terrace, this pub almost makes me want to move to the Quayside, just so it could become my local.

One quibble: there is no disabled access – they should quickly sort this out, and the speed of the kitchen.