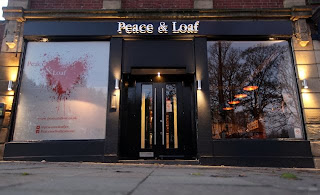 
I’ve been moaning on for ages about the lack of fine dining places in the North East. Then, like a number 13 bus, three turn up at once.

On Newcastle’s Quayside the extractor fans are already being installed in Michelin-starry Kenny Atkinson’s kitchen ready for his new restaurant House of Tides, while down on North Shields fish quay, former Masterchef finalist John Calton has just opened the doors on his first solo venture, The Staith House.

Calton’s recent tweets suggest this former fishermen’s boozer is not quite ready for a visit. However on Monday I received a message from the other 2010 Masterchef: The Professionals losing finalist, Dave Coulson, that his new restaurant in Jesmond is finally fully operational. After a couple of weeks of soft evening openings, he was ready for the Secret Diner.

It’s in that little row of shops in Jesmond Road near the Dene. A simple, modern exterior, and inside three levels with half a dozen tables in each, giving it a modern, relaxed atmosphere. The seating is comfortable, with brick walls, birdcage candleholders and candelabra, and our table faced the kitchen, where bearded Dave and his sous chef Lee Bennett were beavering away.

The menu is intriguing, and great value. There’s a prix fixe at £14 for two courses or £18 for three (available at lunchtime and in the evenings until 7pm), and the à la carte has main courses for around £17. Skate wing with pork rillettes and cauliflower, duck egg three ways, deconstructed fish and chips – this is an intriguing temptation of a list. It’s modern, imaginative and fun, which is rare for this region.

We tried several good house wines, while being entertained by a plate of elegant amuse-geules. A little puff of mushroom purée was so intense and creamy it could have contained foie gras; three beads of apple sauce and crossed slivers of Granny Smith lay on a tiny slice of pork crackling; an artichoke crisp held a single drop of artichoke coulis. This was an excellent introduction to what turned into a very enjoyable lunch.


I began with grilled young, chalky Monks Folly cheese, with pickled vegetables and roasted yeast, while Mrs Diner ordered artichoke soup with “sponge, pickles and crisps” and our friend tried the skate. 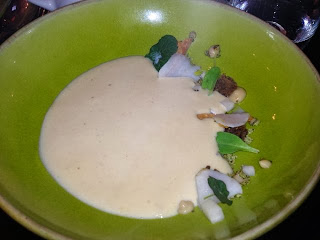 Take the soup, which Mrs Diner will dream about for weeks. It was rich and perfectly seasoned, but this contrasted with the sharpness of crunchy pickled vegetables, and also some spicy ginger sponge. This soup, the liquid poured over the solids, ranged from crunchy to sweet to sour to smooth to – well, you had to be there to experience it. It raised the earthy, nutty, invasive, flatulence-inducing Jerusalem artichoke to a higher level.

The juxtaposition of skate wing with crispy cauliflower and pork rillette, served as a crunchy rissole on the side, was innovative and inspired; meanwhile my own cheese and pickled vegetables dish carried the beeriness of a roasted yeast batter, garnished with nasturtium and young shoots. Very clever cooking.

Even the breads were unusual. They brought us some little orange loaves. Could it be sundried tomato? No, sweeter, but with a distant hint of vinegar. There was tomato ketchup in the dough.


Some of the mains were less confident. My “deconstructed” fish and chips would have disappointed anyone expecting something remotely resembling fish and chips.

It had buttery pommes fondants (where does butter appear in a fish shop?), and apart from thinly grated fried whispers of potato, and perfectly pleasant, moist fish with on a good pea puree, there was nothing to remind one of its origins other than a spoonful of rather ordinary mushy peas. It even had a tiny slice of confited mandarin on the side.

I think this dish needs reconstructing.


Mrs Diner had a plateful of lamb: loin, roasted to softness, and crispy lamb belly, which had superb flavour. But lamb is the sweetest of meats, and it was served with clapshot (neeps and tatties), and carrots, so the whole dish was just too sweet.

Our friend chose halibut from the bargain prix fixe, which came with brandade and a very fine tartare dressing. This was very good indeed.

We tried the plate of desserts for £14, which arrived on a board and included a nice parsnip sponge and a bowl of white chocolate rice with dark dessicated wild rice and edible flowers, which was so special I had to order my own portion.

The menu changes regularly – it’s seasonal cooking with local ingredients, down to the tiny leaves and edible petals.

My 5 star rating places Peace & Loaf in the premier league of North East restaurants, close to Michelin star status, which is a superb achievement for any place in its first full week of operation.

Dave Coulson may have lost Masterchef, but he’s gained a fan.