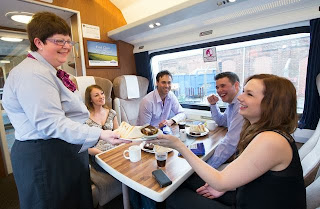 Open: Every half hour, every day.
Meals only with first class travel.
Accessibility: Yes


Not long ago, dinner on a train was an event.

In a dining car with white tablecloths you could eat hearty fare served by jolly staff while the world whizzed by at a hundred miles an hour. It didn’t matter whether you were travelling first or standard class, everyone was welcome and it cost around £20 for three courses. There was soup, steak and school pudding or a generous plate of cheese and biscuits.

That was then. Now we have East Coast Trains.


The temporary management of the most valuable transport link between our region and our capital did away with the restaurant car and so 600 people down the back have a tiny bar, with chilled pre-cooked meals or packaged sandwiches, whilst 120 at the front get a “first class complimentary offer”.

According to the train company, this meal is free, but, as East Coast’s press office told us, the food and drinks service “helped it achieve a 19% rise in First Class journeys in the two years since it was launched”, so it’s clear that people are choosing to pay a great deal extra for the food and drink.

£57 a head, in fact. That’s the average price difference I found between first and standard class tickets during mealtimes.

For this you get a wider seat, a free internet service that hasn’t worked on any of the four journeys I’ve taken in the last fortnight, and a meal “offer”. £57 is more than a 12-course lunch at the 6-star Raby Hunt, and three times the early evening 2-course special at Café 21. And that’s on top of the cost of the journey itself, which can be up to an extra £150.

The people at East Coast trains are very proud of their food. They claim to serve “the best quality products, sourcing ingredients as close as possible to our route”. Mrs Diner and I passed three hours’ worth of eligible cows during our trip to London last week.

We had breakfast on the 9.59. The previous week on another train I’d had “warming porridge”. It was lukewarm and lumpy, which for a bowl of instant porridge costing £57, is quite an achievement.

The menu on our table promised that "our staff are here to make you feel at home”. Breakfast at home is a couple of barely boiled eggs, homemade toast, freshly squeezed orange juice and a cappuccino with two extra shots.

Away from home, in pretty much any hotel in the world, I’d expect a bowl of fresh fruit salad followed by a fry-up, some little pains au chocolat, freshly squeezed orange juice and a cappuccino with two extra shots.

At 9.59am, there’s no fry-up. East Coast’s idea of mid-morning breakfast is a “choice” of porridge, a bacon sandwich, or a cheese omelette on a bagel.

Not all three, just one, with a glass of concentrated orange juice from a box on a trolley, one slice of granary toast or a chewy croissant, and terrible, tepid coffee.

When the train passed Darlington, the trolley trundled past again, but only offered itself to “passengers from Darlington.” This meanness made me feel like I was sitting in a works canteen, rather than a first class restaurant.

Though the staff are as friendly as ever and the views just as cow-filled, this is the opposite of service. At these prices, a first class trolley should be constantly touring passengers offering jars of quality yoghurts, freshly warmed pastries and jugs of freshly squeezed juice. 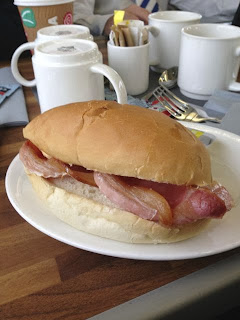 Mrs Diner had the bacon sandwich, with reasonably good smoked piggy stuffed into a cheap pappy bap, like something from Greggs. 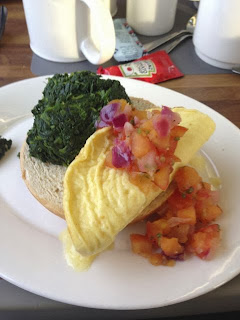 I had a fairly decent cheese omelette with spicy tomato salsa, let down by a mound of pre-cooked and reheated spinach. The coffee came round again at York, a little warmer.

We returned at half past five, too early for a meal in town and too late for supper at home. So dinner was important, even though it effectively cost us £75 a head this time.

There was no appetiser, but a choice of three dishes: an individual chicken curry pie, a “trio of sausages and mash” and a penne “putenesca”, which I guessed meant puttanesca. 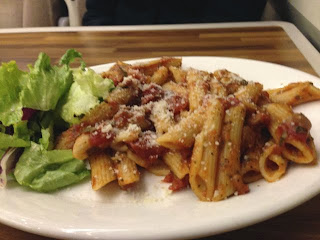 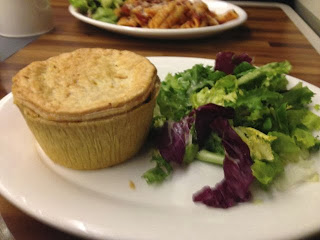 Mrs Diner’s pasta was so overcooked, it had almost dissolved – it had the texture of penne mousse. My pie was a little better, though it desperately lacked tamarind or coriander chutney instead of the mound of totally dry lettuce. Meanwhile piles of withered sausage trios came past, wafting the distinctive aroma of gravy granules. 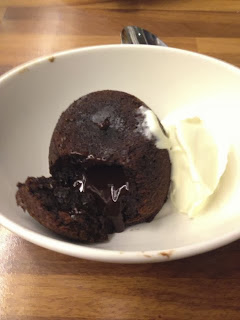 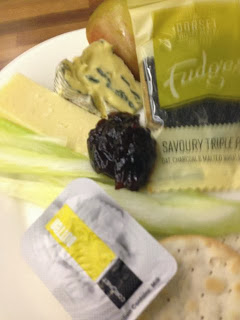 Dessert for Mrs Diner was hot chocolate fondant, which would have been fine had it been hot, and I had the meanest portions of cheese I have ever seen. Tiny slices of Coastal cheddar and Isle of Wight blue: both excellent cheeses, of course, but dwarved by their biscuits, apple and celery. 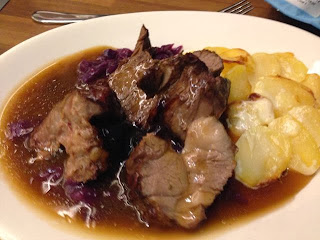 This wasn't an isolated catering blip. The previous week I'd tried the rump of lamb with damson jelly and a "natural jus to complement the lamb". This lamb was tough, very tough, and the natural jus seemed to have most of its origins in a cube. But the dauphinoise potatoes that came alongside were good, and the dessert of raspberry Bakewell with hot creamy custard would have gone down well in any club on London's Pall Mall.

Wine was free – huge tumblerfuls of cheap plonk. We certainly needed it.