[*WARNING: Chef has moved since this review]

My quest is over. After countless disappointments, I’ve finally found a good burger in the North East.

Regular readers will know my determination to find half-decent American food here. Just as I go to Rasa for a real taste of Southern India, or to Caffé Vivo for lunch in Venice, or to Hei Hei if my tastebuds fancy a trip to somewhere in mainland China, so I occasionally crave a fix of Americana. I’ve been known to drive to Costco for a genuine beef hotdog (£1.50, including all the Coca Cola you can drink).

You may think this is a trivial matter, but I take burgers seriously.
There’s nothing worse than a dry, crusty, soft or pappy bun, meat that’s too lean or mean, slapped together with salad, tomato and raw red onion.

Above all, they must be pink. If you always eat burgers well-done, you’ve never tasted a proper burger.

Lane 7 looks the least likely dining place. It’s a bowling alley on St James’ Boulevard with the exterior of a rundown provincial cinema. Inside it’s a grown-up playground.

Upstairs are four bowling lanes with smart walnut flooring and some pool tables; on the ground floor there are a further four bowling lanes and an enormous bar and a large modern restaurant next to an open kitchen and in the basement they’ve just opened a crazy golf course.

I was once taken by one of my children to a ‘Superbowl’ somewhere near Whitley Bay, where there were 18 noisy lanes and a greasy Wimpy Bar in the corner. It was shabby and the food inedible. Definitely not the place you’d ever go for lunch.

Lane 7 is the opposite. A really nice industrial-chic design, huge well-stocked bar with some very interesting beers, including a malty new Swedish lager called Pistonhead and – wait for it – very good food. Yes, not just good but very good.

The key is the chef. Chris Finnigan started out ten years ago as an apprentice (out of Newcastle College) with an attachment to Raymond Blanc’s Le Manoir. He left three years later as a commis with a French influence. Since then he’s worked his way through a number of gastropubs and hotels, until he was hired by the forward thinking property developer Tim Wilks, who came up with the bright idea of this “boutique bowling alley”.

There are a few of these in London, most of them called All Star, but none has ever got the food right. Finnigan is taking this project seriously. It’s based around barbecue and smokery, but his presentation is good and his Cajun-style sauces and rubs are superb.

You don’t have to bowl to eat, or eat to bowl, but I did both. There’s something wonderfully social about bowling, however bad you are. The place was full of people laughing so much at their own ineptitude, they were too absorbed to notice my own. As my aficionado friend scored strike after strike, I stayed languishing in the gutter, but I still had the best time. And that was before the lunch.

We’d shared a bar snack of light corn dogs first, which we dipped in cola-cue sauce so deliciously sweet it might have been made with cherry cola. Then, after my friend had claimed victory (and with it, the right to pay for lunch), we sat down at one of the big comfortable semi-circular tables with bright blue upholstery and ordered maple smoked lamb belly and hickory smoked pulled pork. 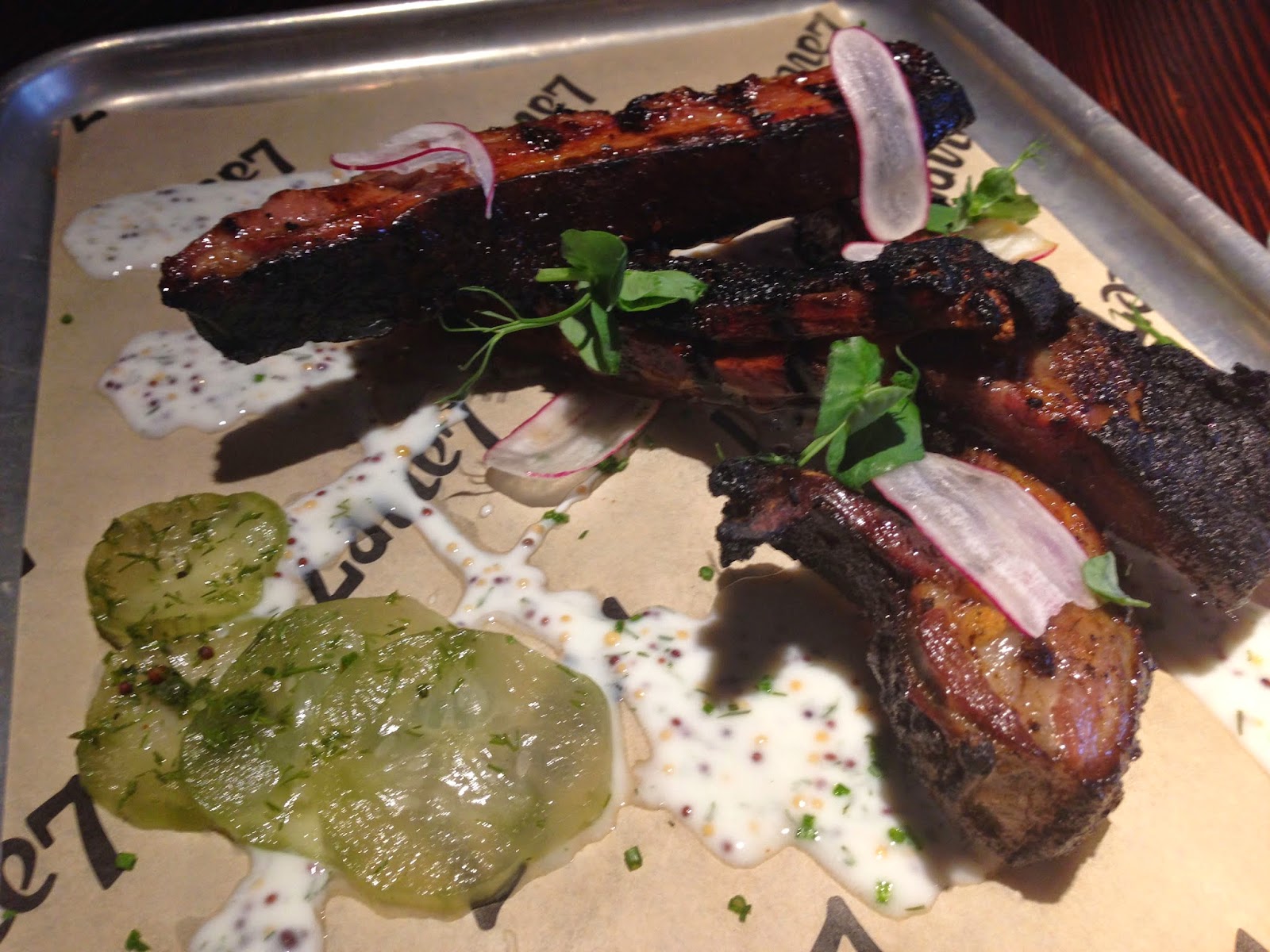 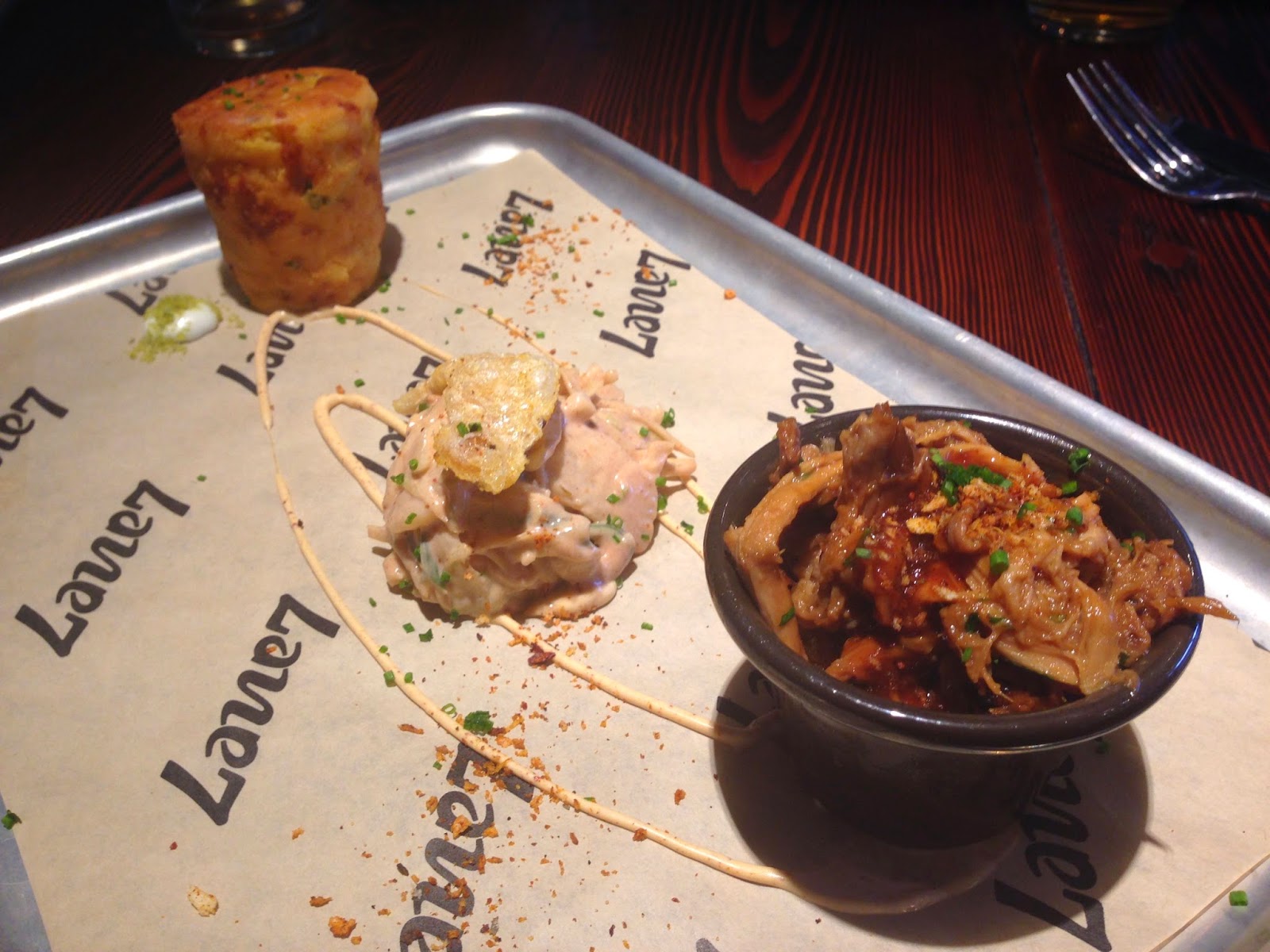 The lamb had been rubbed in a subtle mix of Cajun spices and what tasted like ras el hanout; it came with pickled cucumber and mustard yoghurt.

The pulled pork was tender and very spicy, as was the kimchi slaw that accompanied it, but the little cheesy corn bread was a little rubbery. 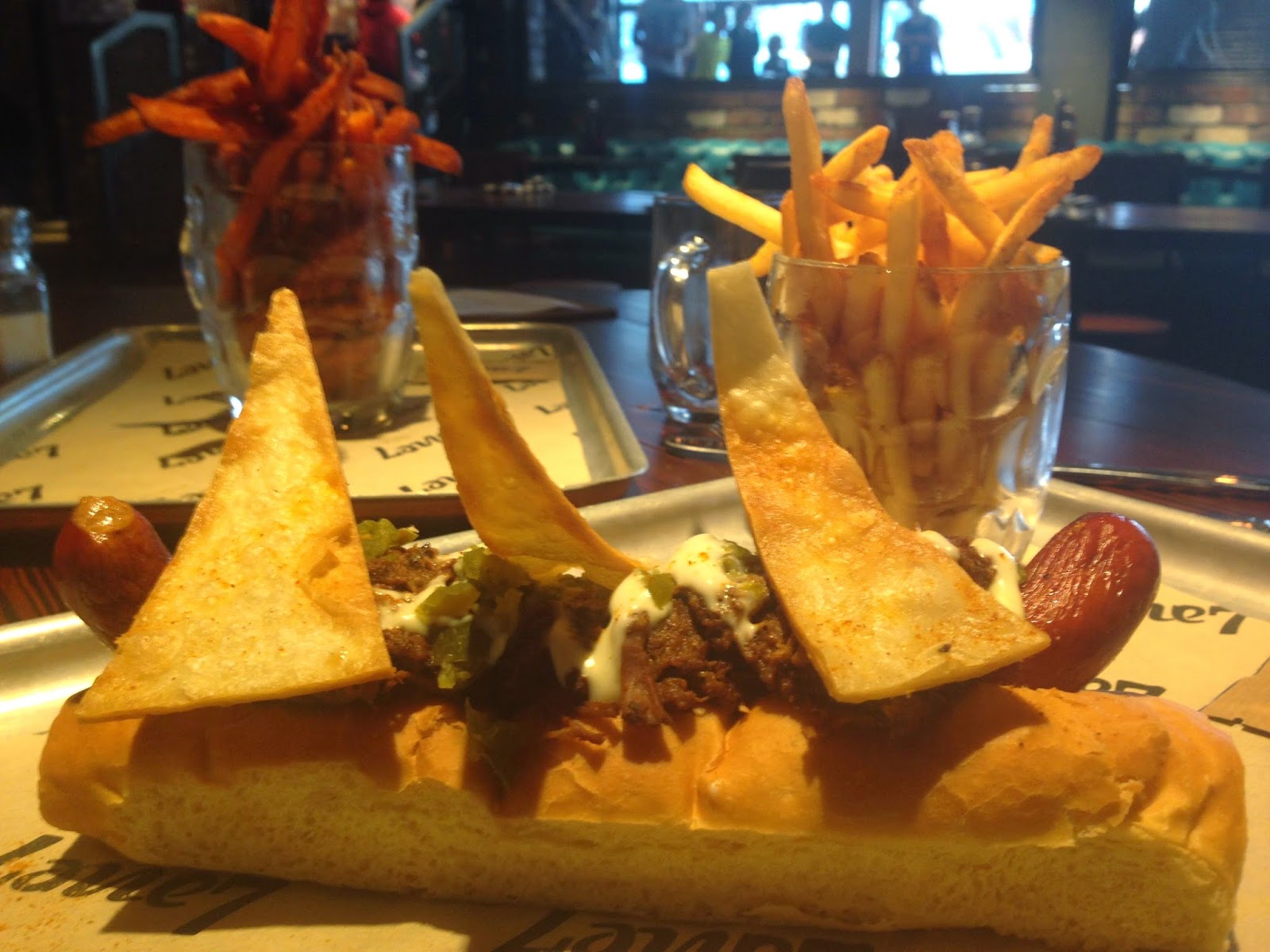 For mains we had a chilli pimp dog and a double cheeseburger. The actual sausage was from Big Apple Hot Dogs, London’s finest street hot dog, but Finnigan lifted it to finer diner status with large crispy homemade nachos, jalapeños and a covering of short rib chilli (very tasty, but I would have preferred it a little stickier). 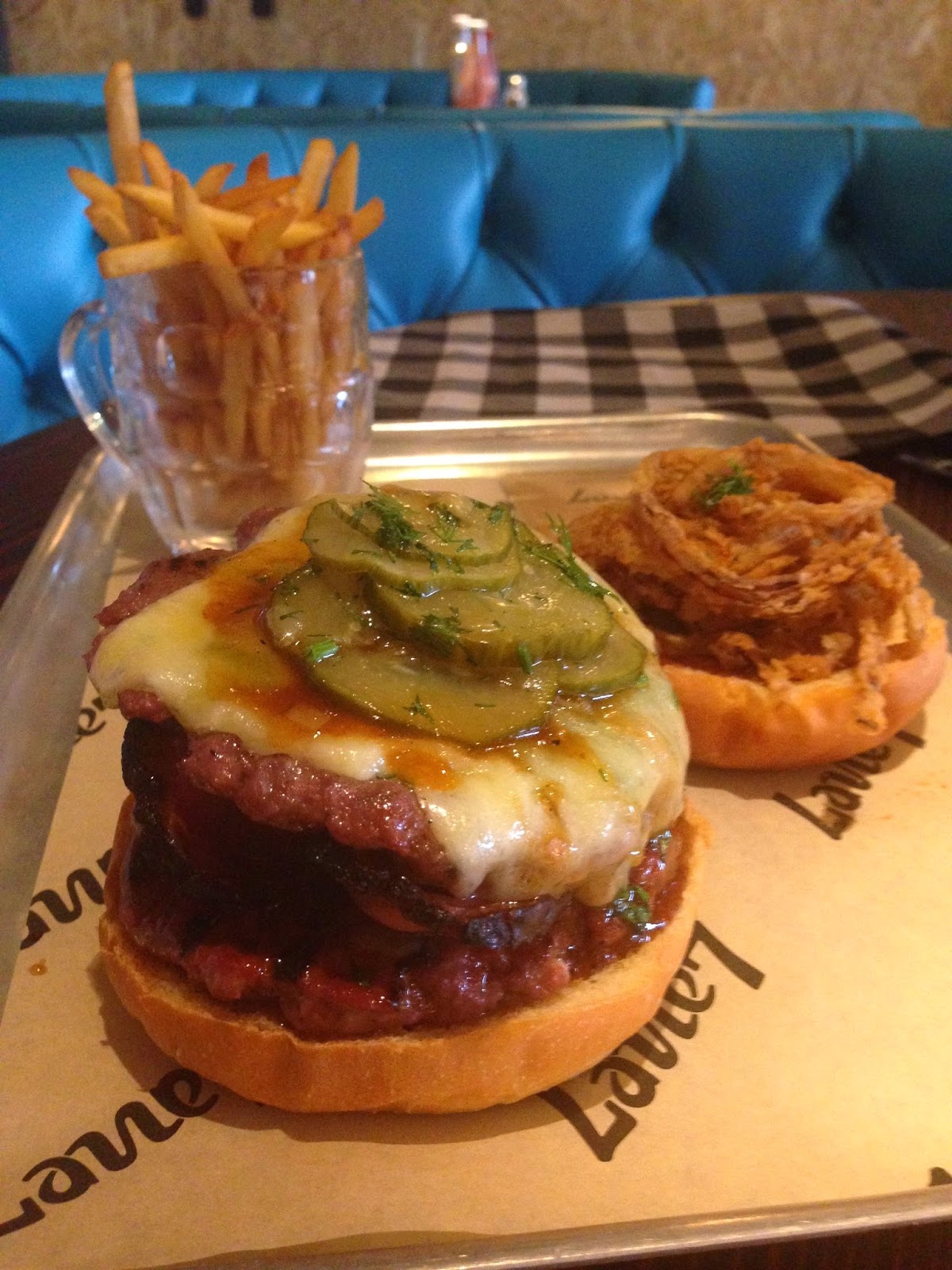 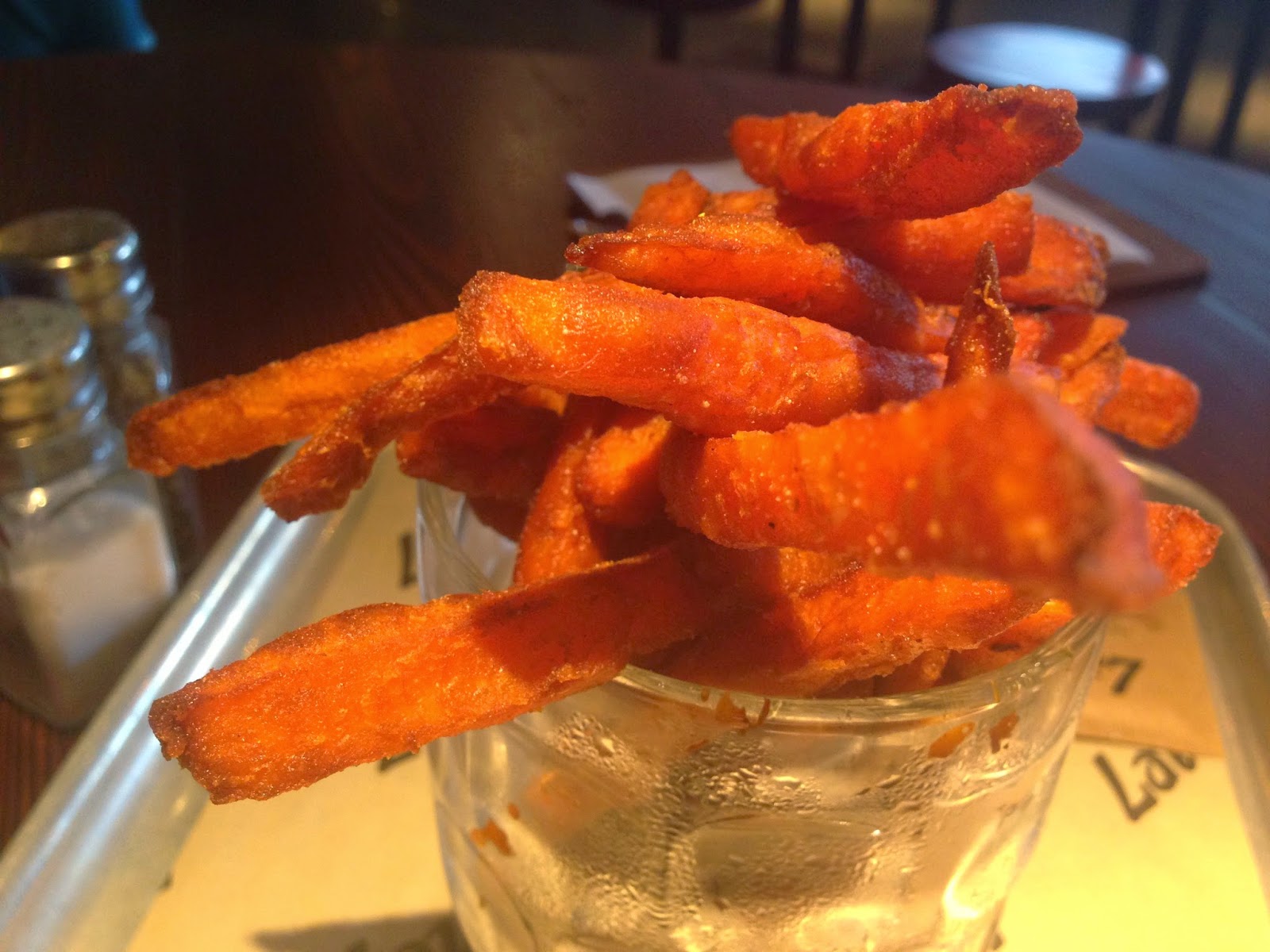 Then came the burger. Two patties sat in a demi-brioche (that is, a bun made with custard powder instead of whole eggs) – not quite the real deal, but sweet and almost yellow enough. The meat was sweet and juicy, with barbecue sauce Monterey jack cheese, smoked bacon, dill pickles and crispy onions. We ordered a side of spectacular sweet potato fries.

You may deduce that we’d be too full for dessert. You’d be wrong.

We spurned the Mississippi mud pie, but made do with “sticky bourbon pudding” made with (not quite enough) Evan Williams Kentucky bourbon. It came with salted caramel sauce and indifferent vanilla ice cream, but it didn’t take the edge off a fun, inexpensive (£15 a head) if rather noisy lunch.