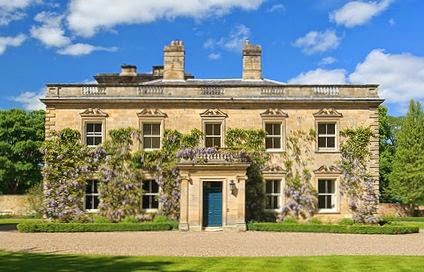 I’d quite like an excuse to stay at Eshott Hall. If anyone is planning a house party there and they’re short of a couple of guests, please feel free to invite Mr and Mrs Diner.

The wing of a larger 17th century home, it’s a beautiful old building in attractive grounds, a place to lounge around with baggy sweaters and spaniels, fall asleep in an armchair, or walk around the gardens after a long breakfast. It’s informal, attractively furnished and decorated in cream and white. Its website tautologically describes it as “entirely unique”.


Sadly, Eshott has a tragic recent past: the previous owner died after his business went into administration and the hotel, his family home, had to be sold. It was bought by the man dubbed Britain’s richest vicar, Rev Robert Parker, who added it to his collection of nice Northumbrian houses, which include the halls at Guyzance and Doxford.

All three venues host weddings, and previously I’ve given Doxford Hall 4 stars for its cooking, but I find Eshott Hall the most atmospheric: it has just 11 rooms, a small function room, a sweeping staircase with a large late Victorian window and two small dining rooms. I think I could happily live there. 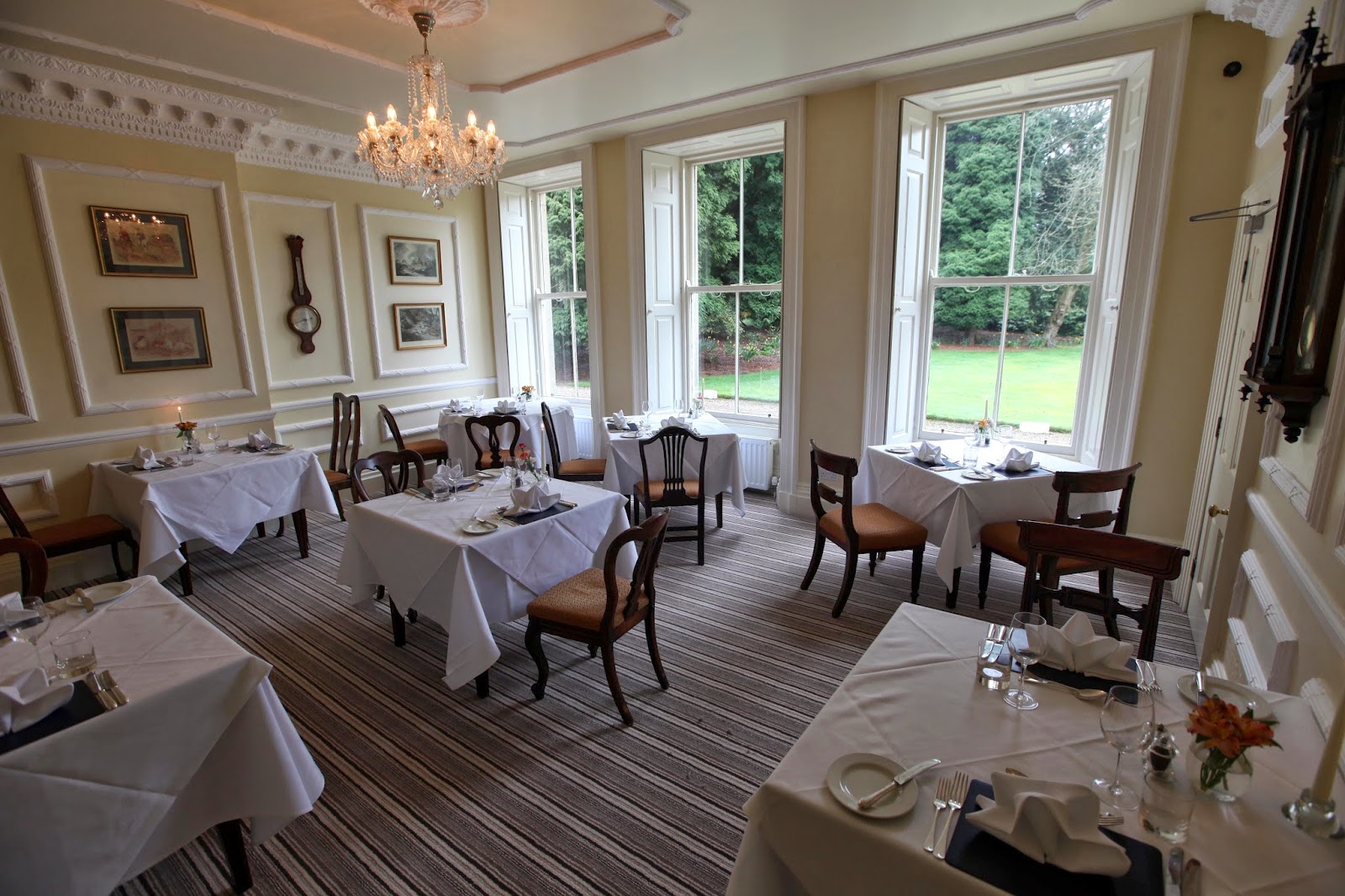 Mrs Diner and I swept up to the front door and were ushered by charming staff into an elegant, bright room, with perfect little floral table arrangements and rather loud jazz coming from an obtrusive portable CD. The waitress spotted this disconnect without our having to raise it and immediately offered to turn the volume down. We like jazz, but there has to be another way to pipe it into the room.

Mrs Diner modestly chose smoked salmon with crab, followed by loin of lamb. Gnocchi was the only vegetarian option.

Over a pleasant amuse-bouche of prawn and salmon mousse with sharp tartare sauce, we were offered two breads:  spiced mango (so good I nearly asked for the recipe) and salt and vinegar (which my palate couldn’t locate). 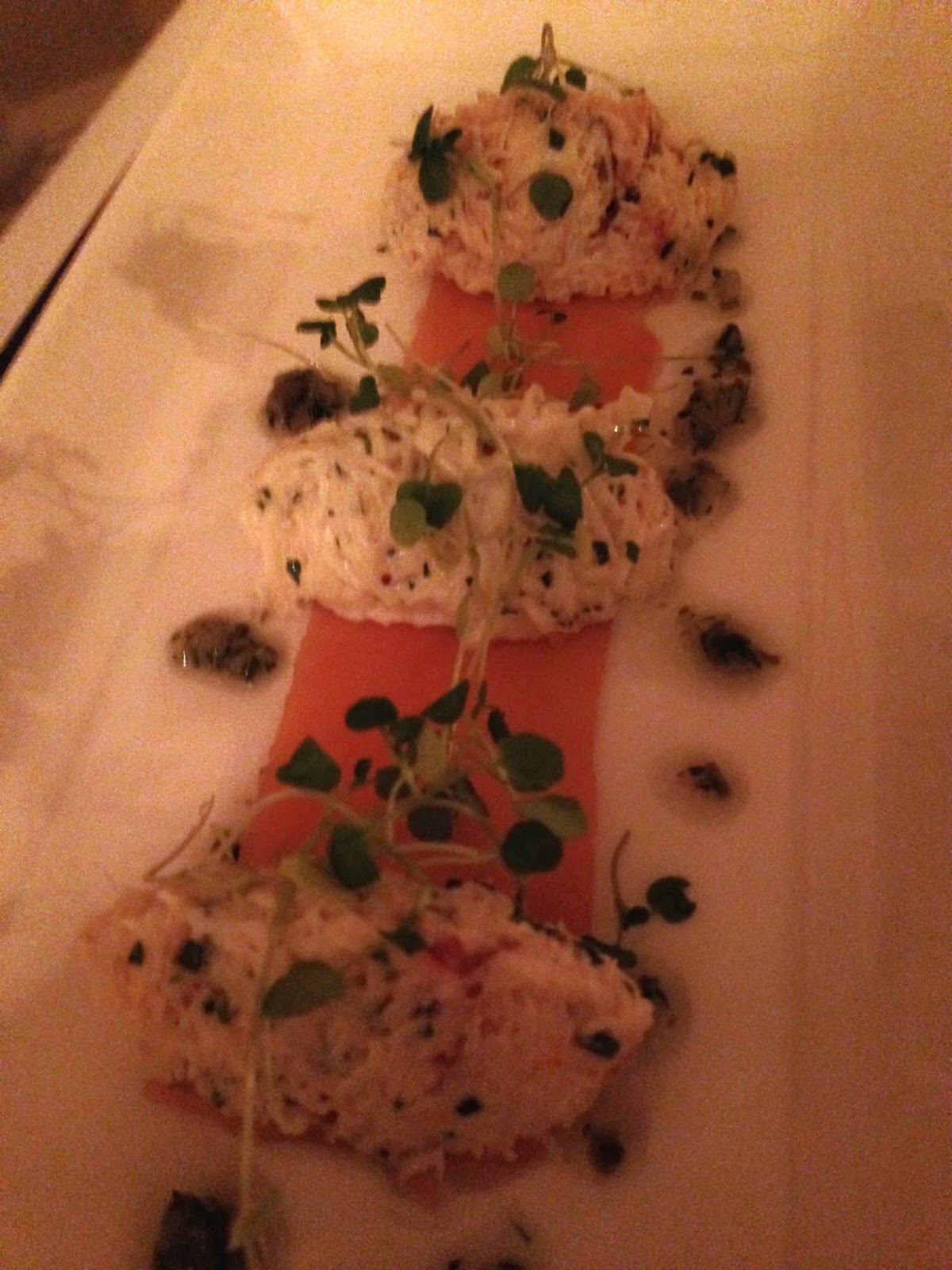 Mrs Diner’s smoked salmon with crab turned out to be crab with smoked salmon. A thin film of fish lay across the plate. It was clearly from Robson’s of Craster, but it wasn't substantial enough to support three generous mounds of crab with celeriac remoulade. 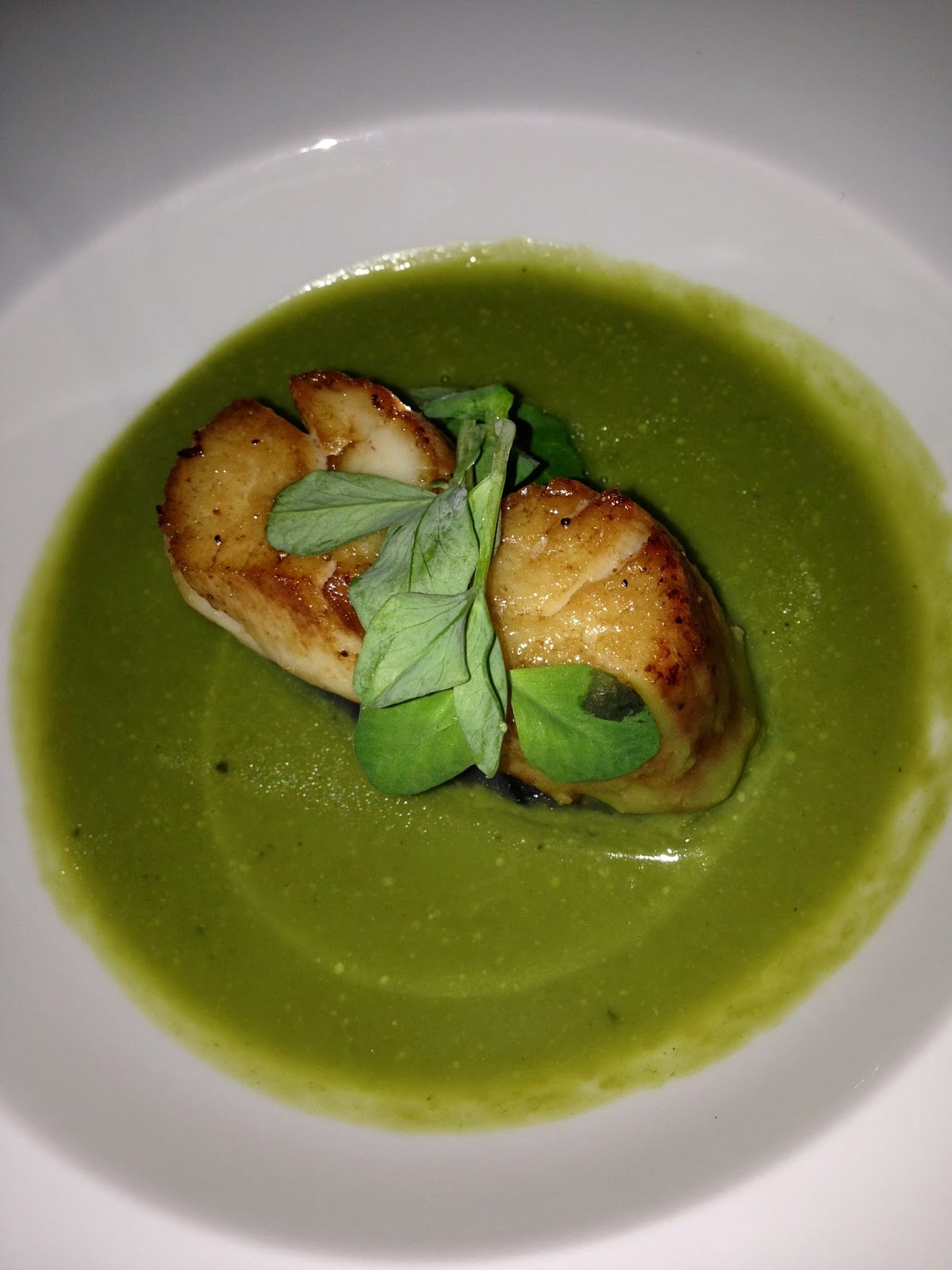 My scallops sat on a bed of crushed purple heritage potatoes hidden under a moat of pea and nettle soup. The scallops were small and a little over-seared but the soup was delicious, though it wasn’t enhanced by the purple potato, which turned it rather starchy in the mouth.

Mrs Diner’s lamb was nicely pink, and arrived with oversweet garlic and potato croquettes and good pea and mint purée. My steak sat on a spoonful of braised ox cheek (also too sweet), shallot purée and a block of potato that was called pan haggerty but wasn’t cheesy enough to carry the name.

The kitchen had a blip with my steak, which arrived overcooked. It was quickly replaced, together with a compensatory glass of Shiraz, which was smooth and rounded.

Our desserts were classic comfort food: chocolate and banana bread and butter pudding was cut through with yoghurt ice cream;  chocolate millefeuille (with salted caramel sheets instead of puff pastry) came with pomegranate.  Service was friendly, helpful and efficient throughout.

I guess you don’t want too surprises at a country wedding, and the cooking throughout our meal reflected this. It looked pretty, but there was nothing that made me sit up and want to explore this menu further. It’s reliable, but not terribly ambitious.

For example, a little jug of sauce arrived with the mains.

“Is this for the lamb or the beef?” we asked.

“It’s for both,” said the waitress.

Which just about sums it up – they’re playing it safe. For the price, I expected a little more invention and dynamism: a lamb broth perhaps, and a really beefy jus, or ox cheek with real depth and intensity.  Nevertheless, this is the best British cooking I’ve found so far in the Morpeth area.  There's skill in the kitchen; now they need to push it on to the next level.

Eshott Hall is just off the A1, about 6 miles north of the town, so I certainly recommend it for a comfortable, satisfying dinner. Or a house party.