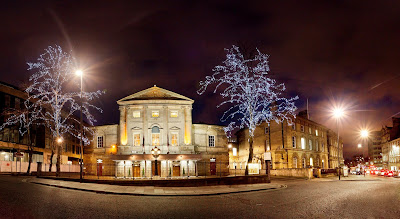 
The Assembly Rooms have been a Newcastle landmark for nearly 250 years. A vast barn of a place, I’ve only ever been inside for the odd wedding. The food was nothing to write home about, though the couples seemed happy enough with their big day.

But now the downstairs part of the building has had “a glamorous reincarnation”, and the big black hoardings outside proclaim it as “Newcastle’s Premier Venue”.

The owner, Antony Michaelides, whose family bought the place in the 1970s, has set out to create something “sophisticated and aspirational”. Its website says it is now a “spacious yet welcoming environment for daytime and evening restaurant dining… a splendid addition to Newcastle city centre”. 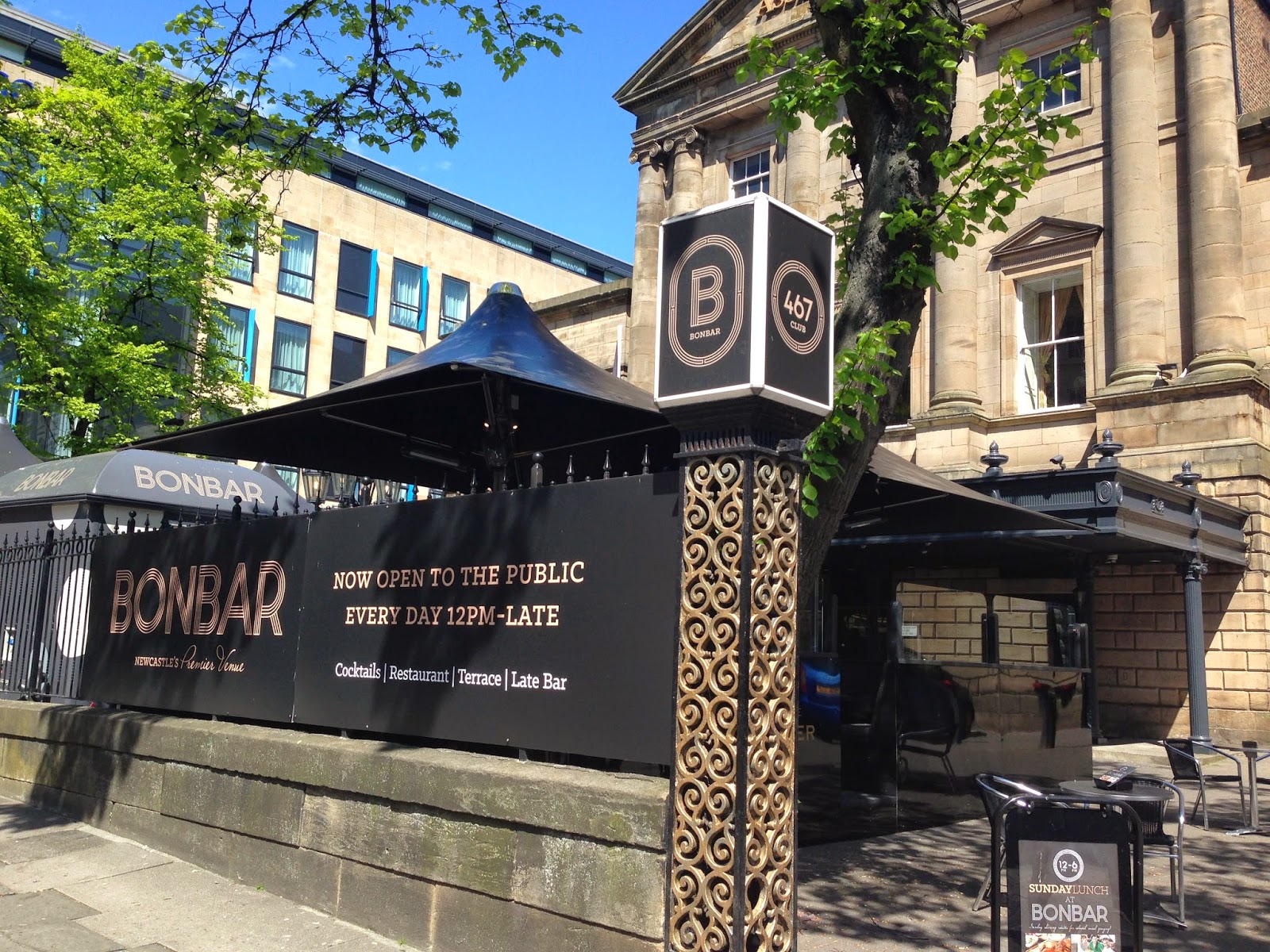 From the outside, the glamorous reincarnation behind the black billboards turns out to be a courtyard of forbidding black booths. We arrived on a sunny lunchtime, but black canopies successfully held the shade like bouncers: “Sun? Sorry, you’re not on the guest list”.

Loud music was playing through speakers, as we ventured inside.

In the reception there’s a glass cabinet with a fake-jewel-encrusted skull, à la Hirst. A man greeted us with one of those walkie-talkie earsets they have at rock concerts. He seemed to be the only person around, so I wasn’t quite sure who was on the other end of the microphone, but he was very friendly and led us straight into the venue. 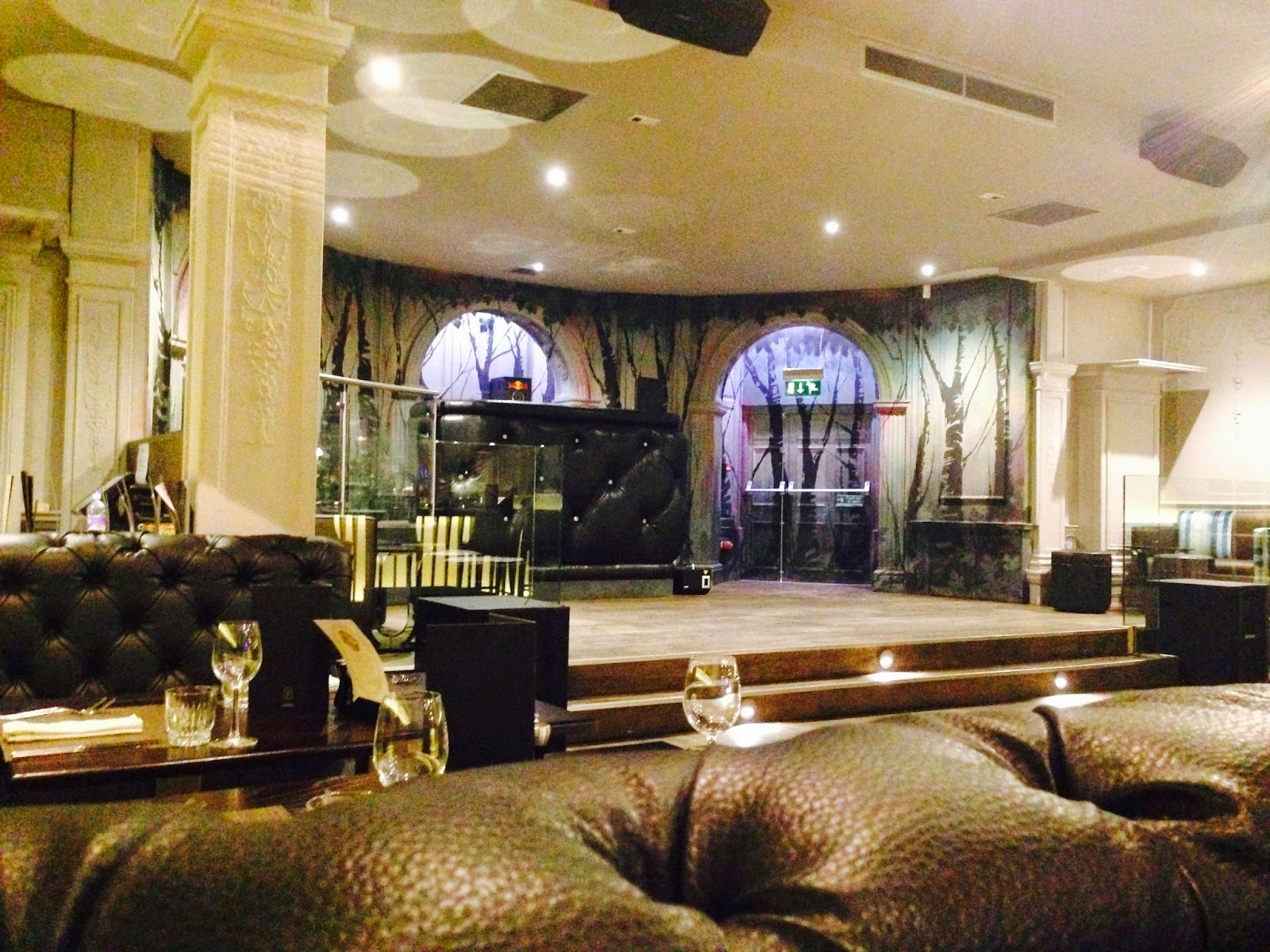 It’s actually the ground floor ballroom, and I have to admit they’ve done a pretty spectacular restoration. The 18th century plasterwork has been repainted in grey and white, the high ceilings exposed. At one end there’s a stage or dancefloor with big speakers and an attempt at a trompe l’oeil of trees. But to get to the other side of the room, you had to navigate the bonbar itself. 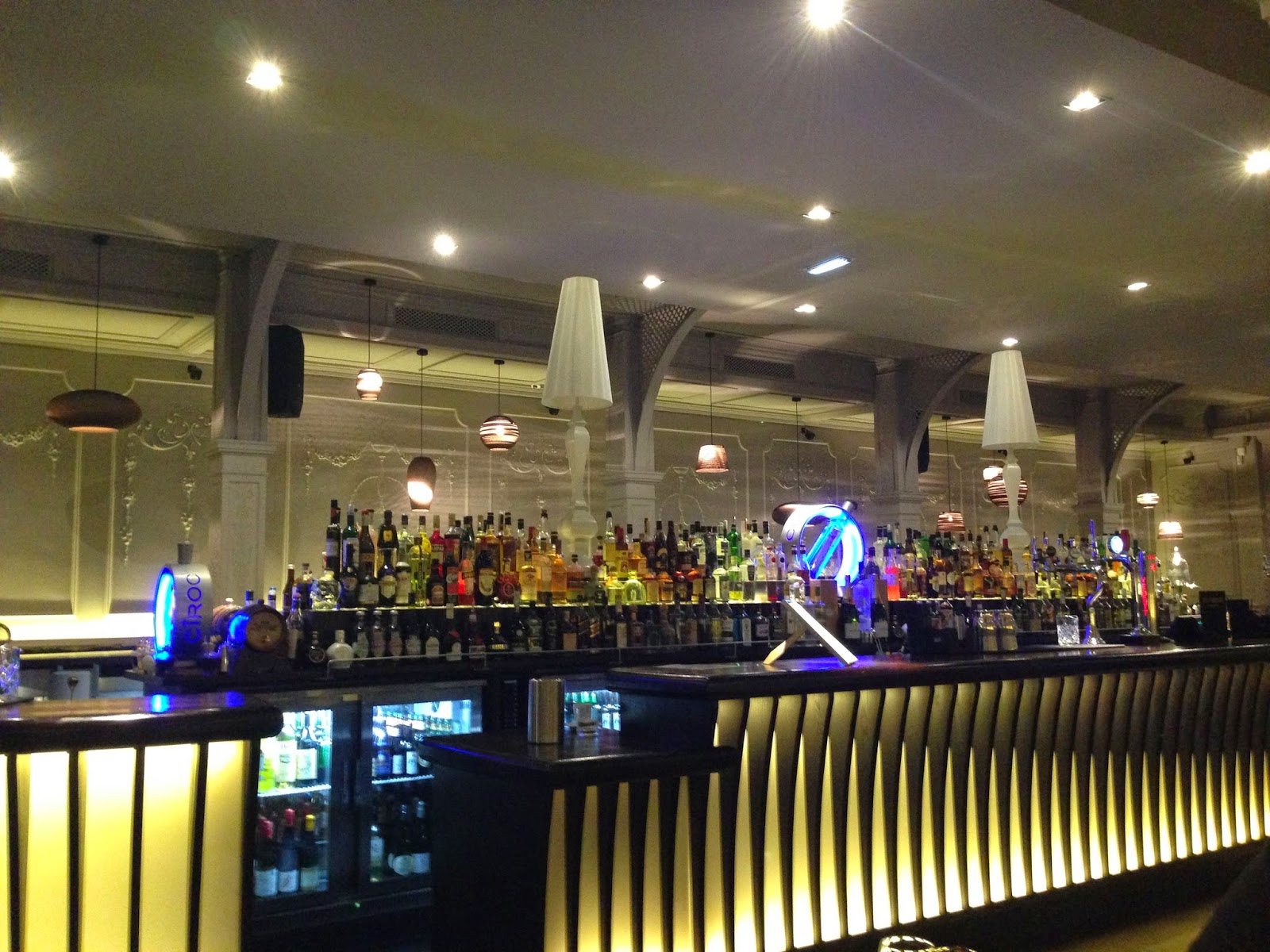 It’s an ocean liner of a bar, moored in the middle of the room, stocked with enough ingredients to intoxicate a city. The room is designed for 700 people to get very drunk indeed, but in an 18th century setting. At the edge are booths, each of which could accommodate ten friendly people. Luckily there were five of us, so we could spread out. At 1pm we were the only customers.

The music was playing even louder than outside. Asa was singing Be My Man (“And I can cook you dinner, it won't be so bad”). I hoped the lunch wouldn’t be bad either.

It certainly didn’t feel like a proper restaurant. It was like being backstage at a Justin Timberlake concert (more people with earpieces arrived with our drinks, while others were restocking the bon bar). It was as if we’d arrived a few hours before the main event. Which, of course, we had.

As a rule, bars in Newcastle don’t tend to bother with real cooking. So we were pleasantly surprised when the food arrived. 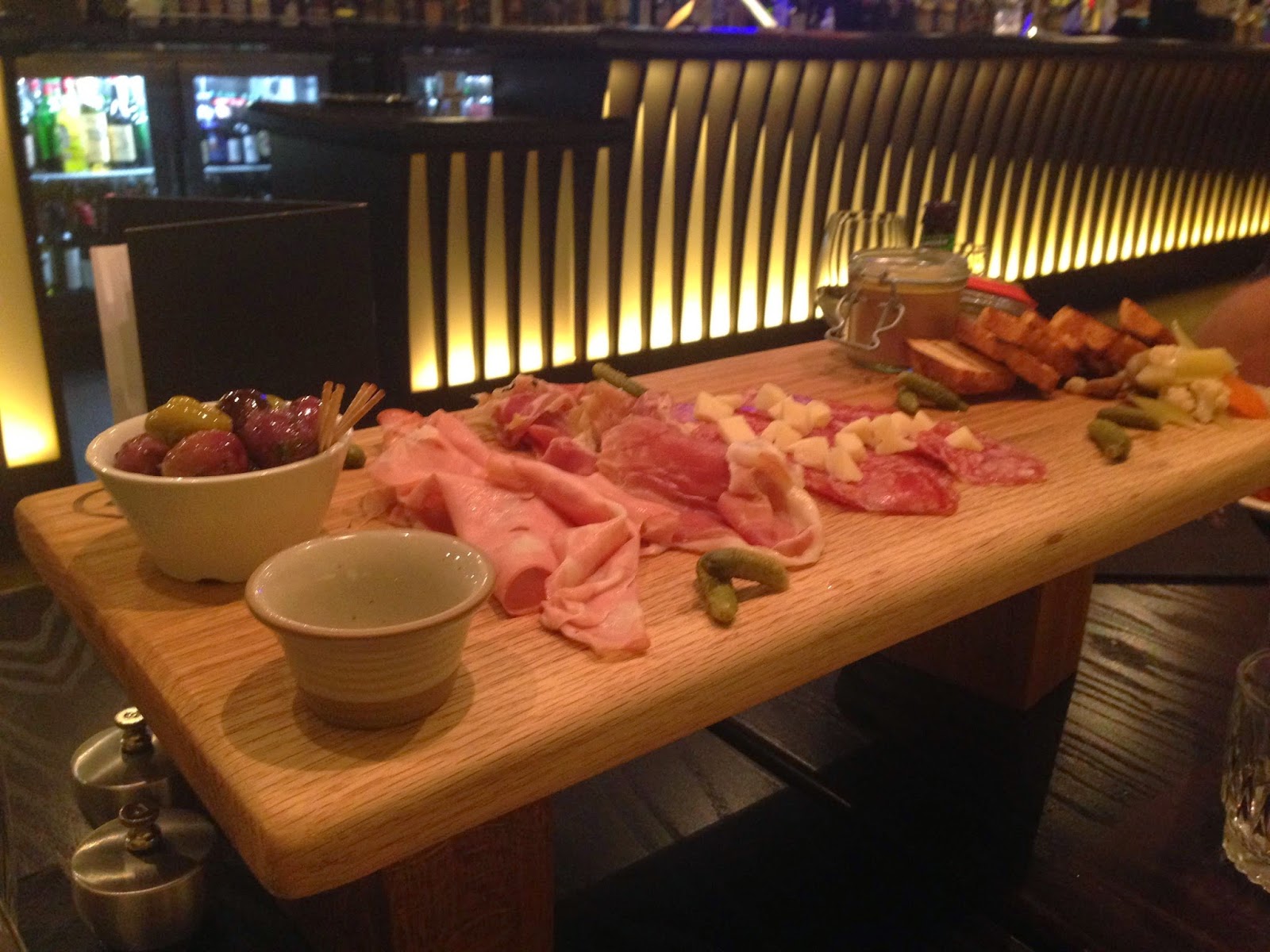 There was a giant plank of cold cuts (£14 for two), placed on blocks of wood, containing a nice selection of quality Italian cuts, some chicken liver parfait and a sprinkling of Manchego. It was well sourced and generous, with good cornichons, excellent vegetables pickled in tarragon and some very good homemade brioche. 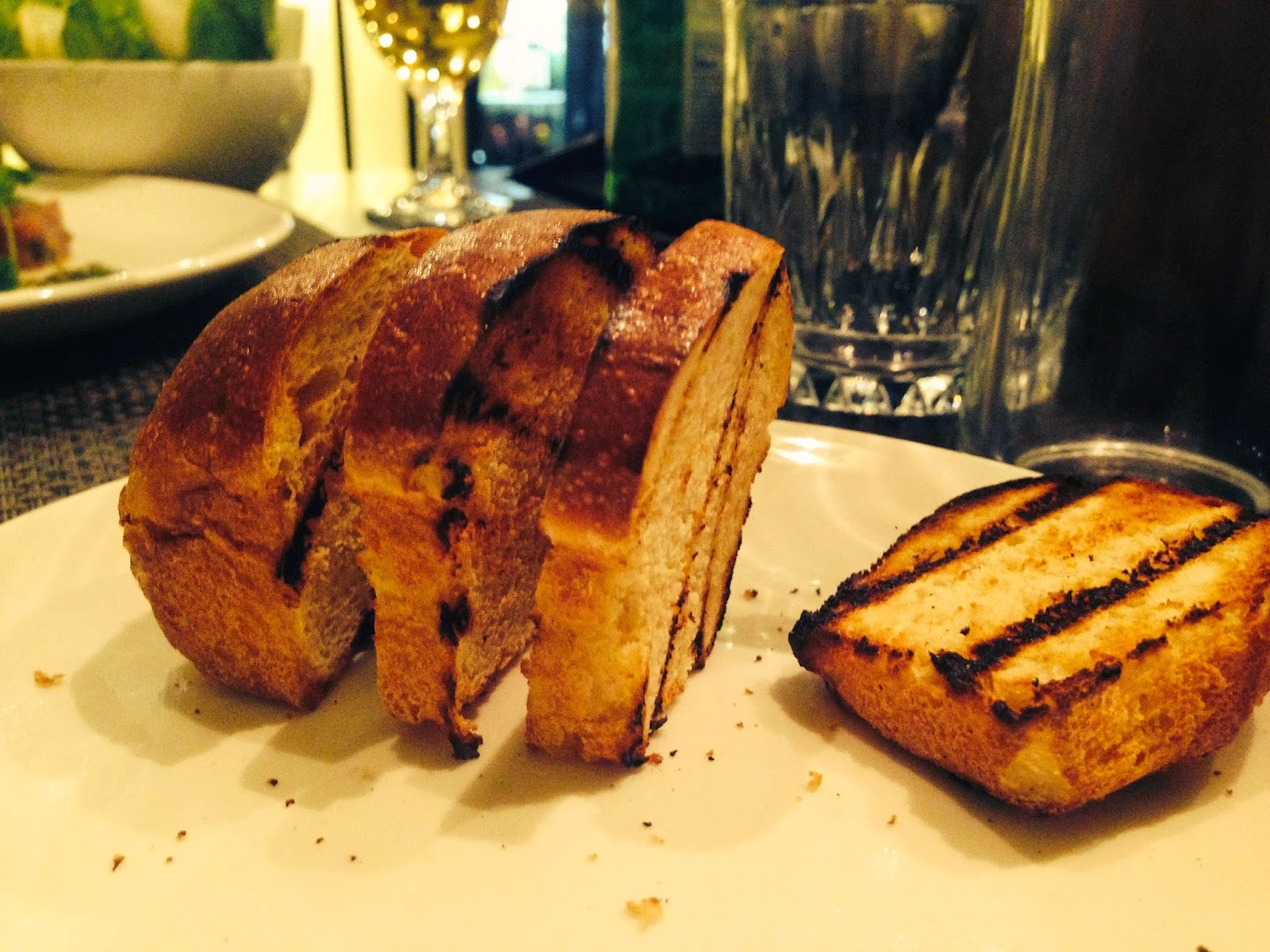 So good, in fact, that we ordered more. It was the bed for the liver parfait, which came in its own little jar. Sadly the parfait was wet, rather than smooth. 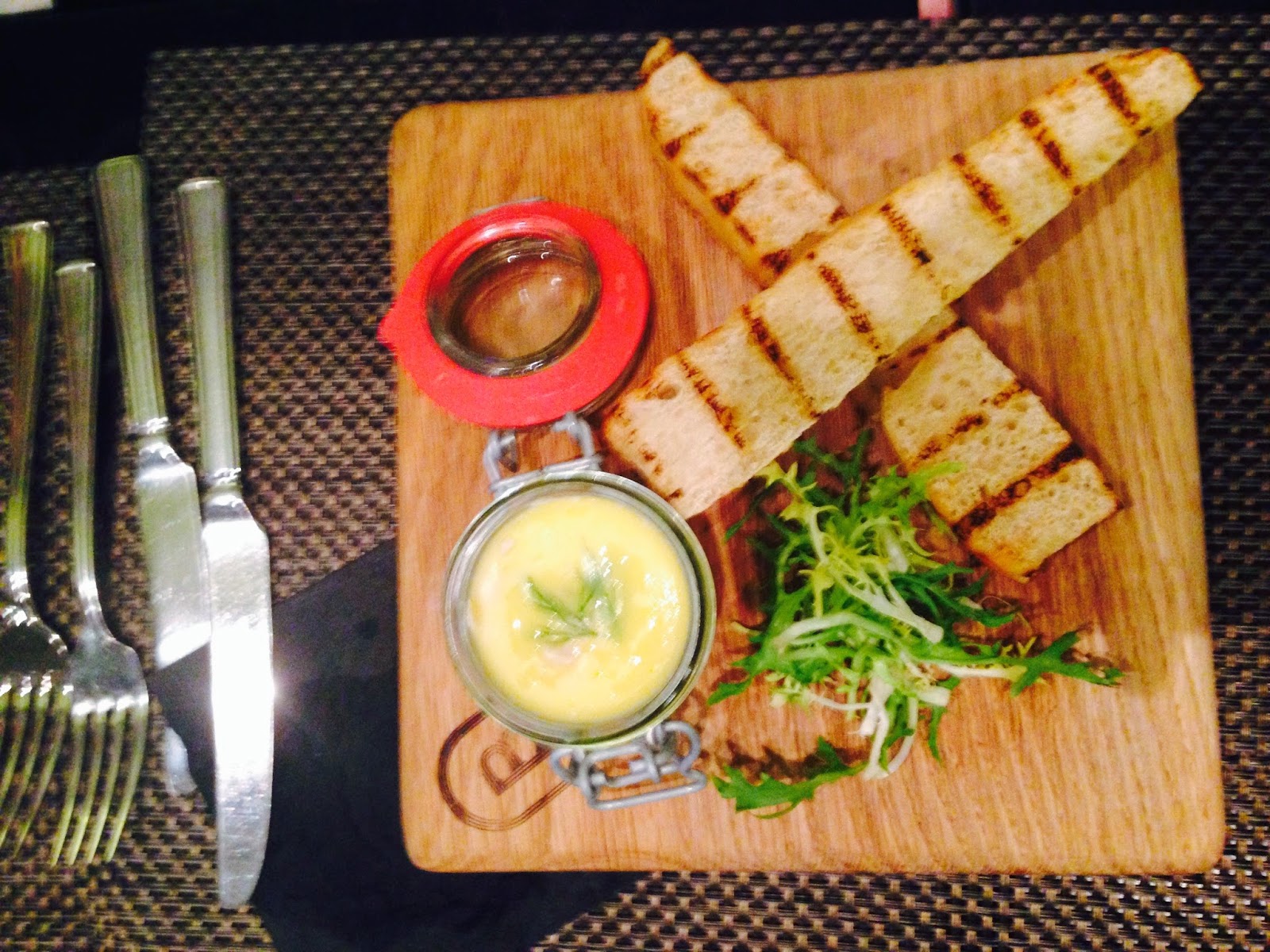 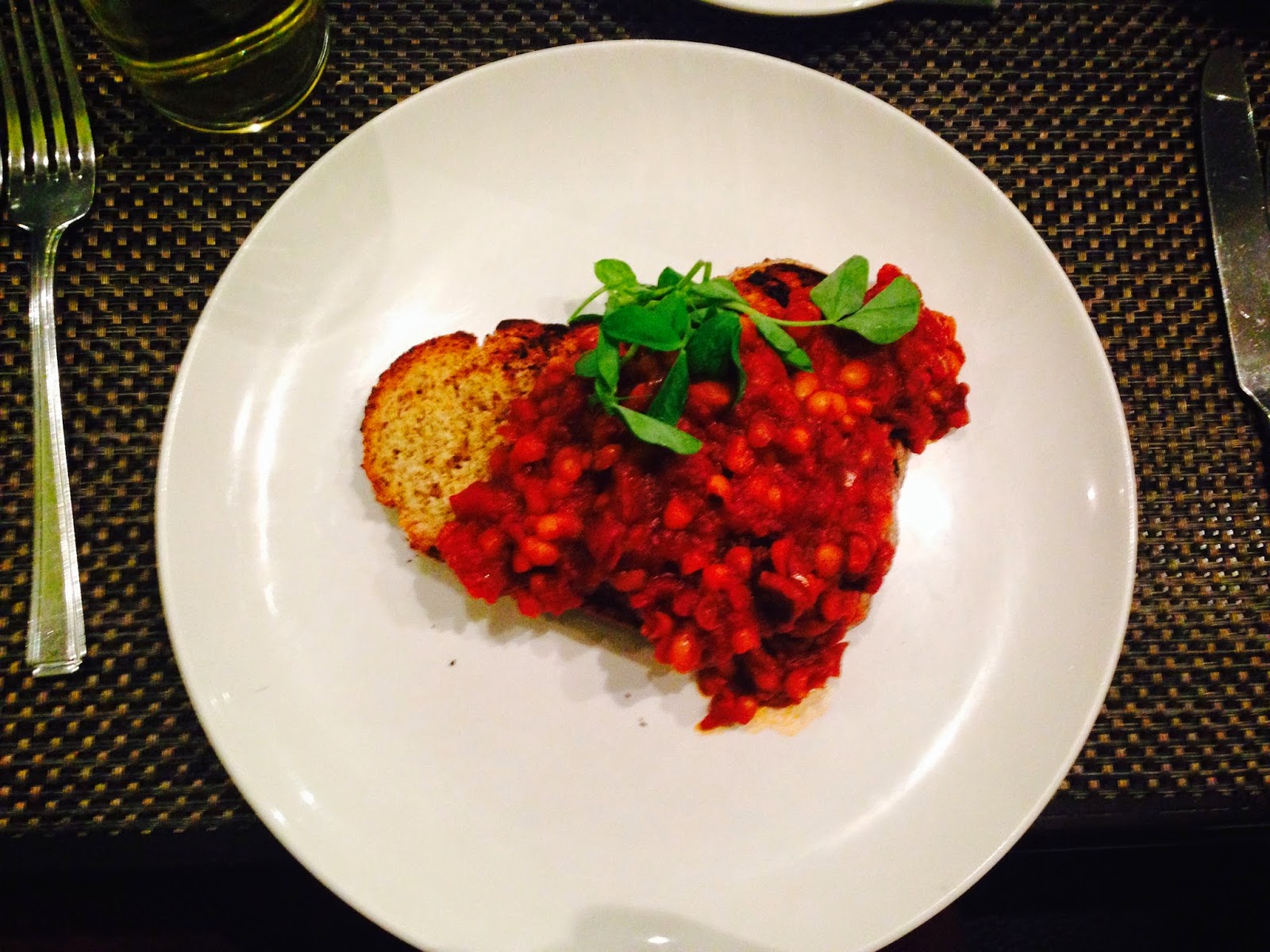 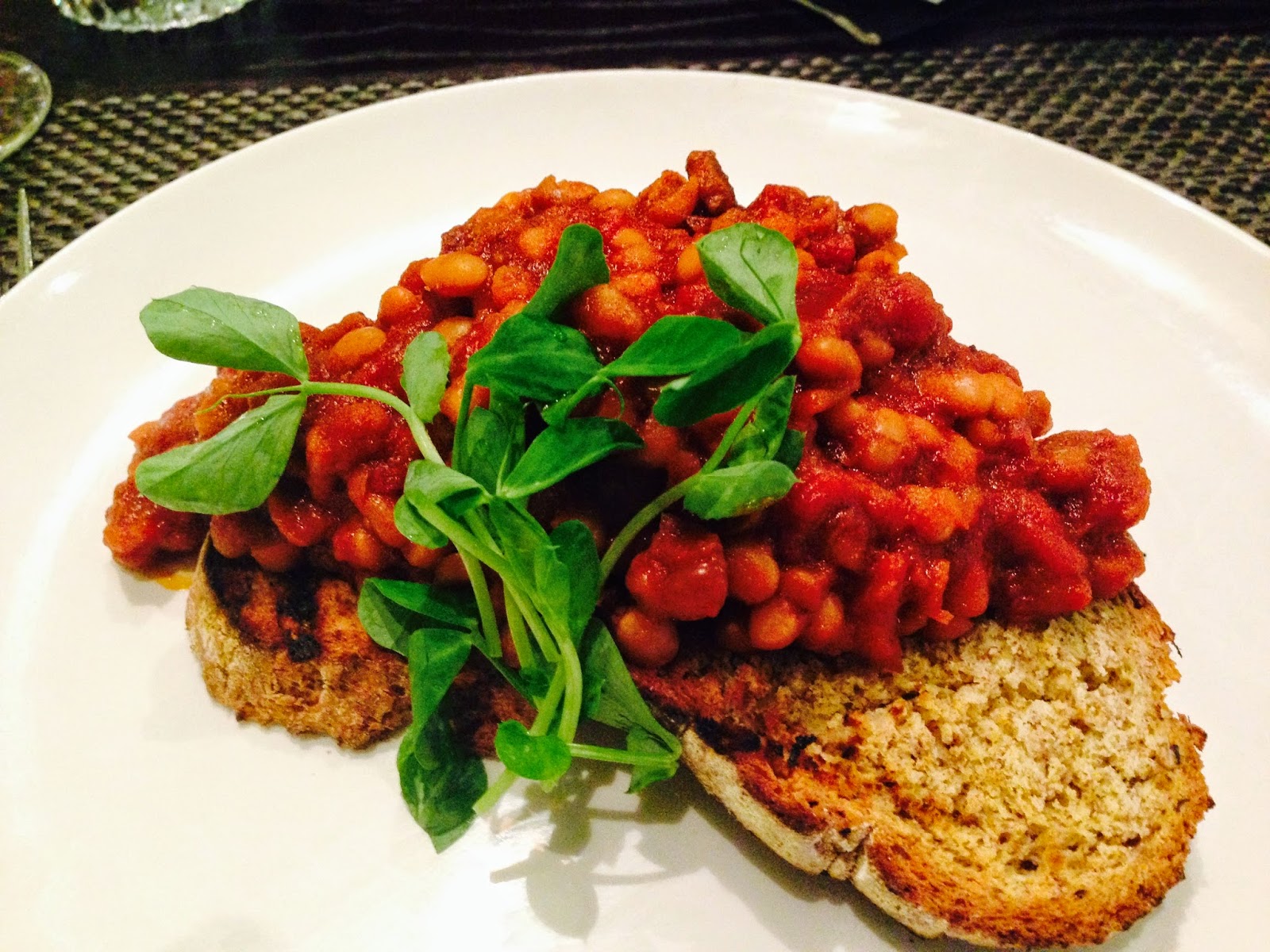 Meanwhile I had beans on toast. These were homemade, slow cooked haricots with pancetta ladled onto soda bread and garnished with pea shoots. It’s tough to be picky when someone has gone out of their way to make homemade beans for you, but I found them rather sweet, and the texture of the bread too dry. Ernest, the café in the Ouseburn, could show them how to do it properly. 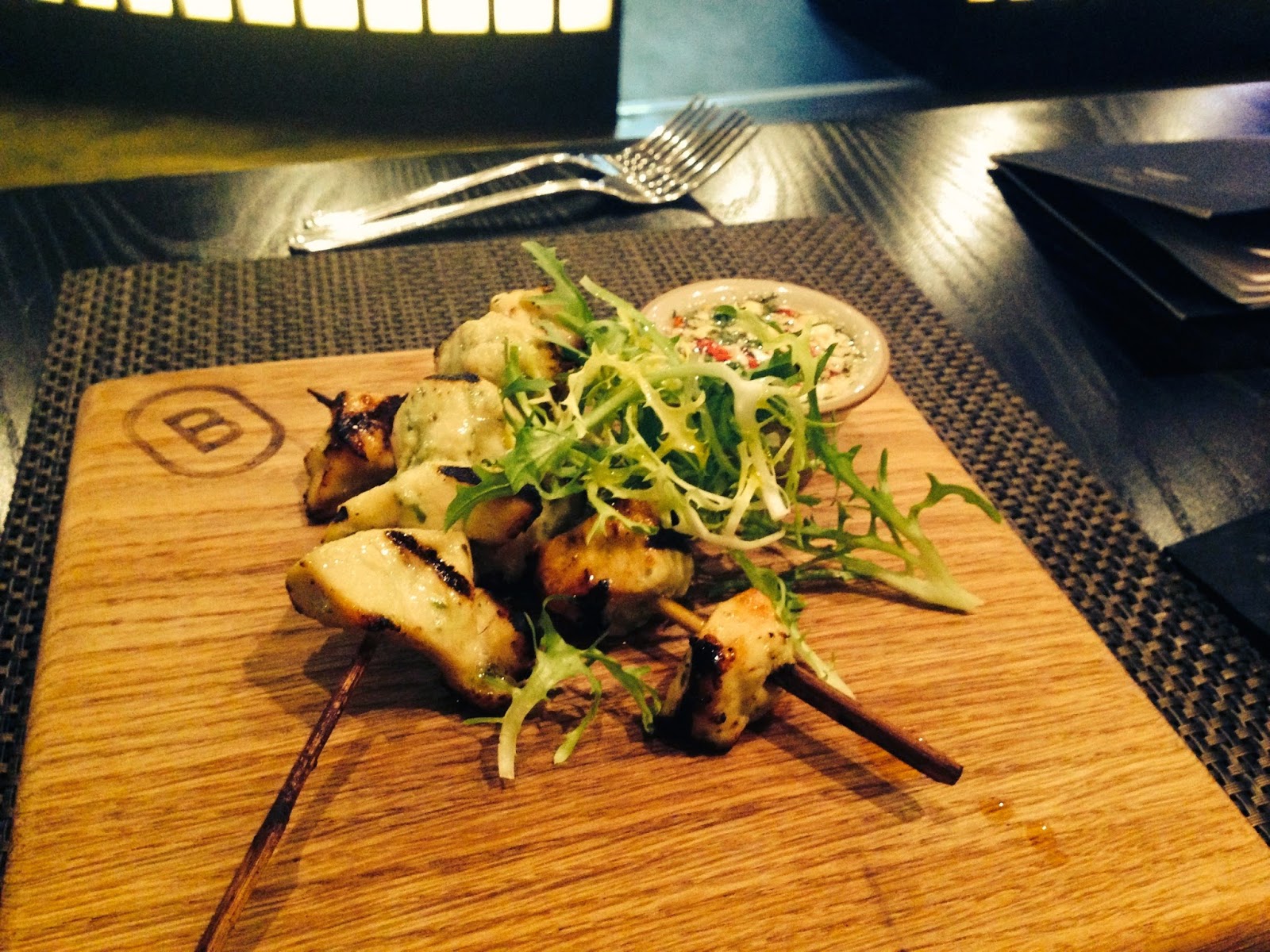 One of our friends ordered rather dull chicken skewers with sweet chilli sauce.


Our main courses (£13.50) included perfectly acceptable sea trout, served with a sauce vierge (which correctly included coriander seed, but which incorrectly hadn’t been crushed), and an unmemorable Asian chicken salad. Everything had pea shoots.

Our friend had very fresh seared tuna with a nicely sharp nutty sauce.

I’m not convinced they’ve got this place right for a lunch venue. Not because of the food – there’s clearly a competent team producing food that is well presented and above average for the city – nor the staff, who were well trained and friendly. No, it’s because I couldn’t help feeling we were there by mistake.

Whether it’s the silly earpieces, or the vast bar dissecting room and atmosphere, or the loud, fast music, or the austere black exterior, this just didn’t feel quite right for lunch on a sunny day.