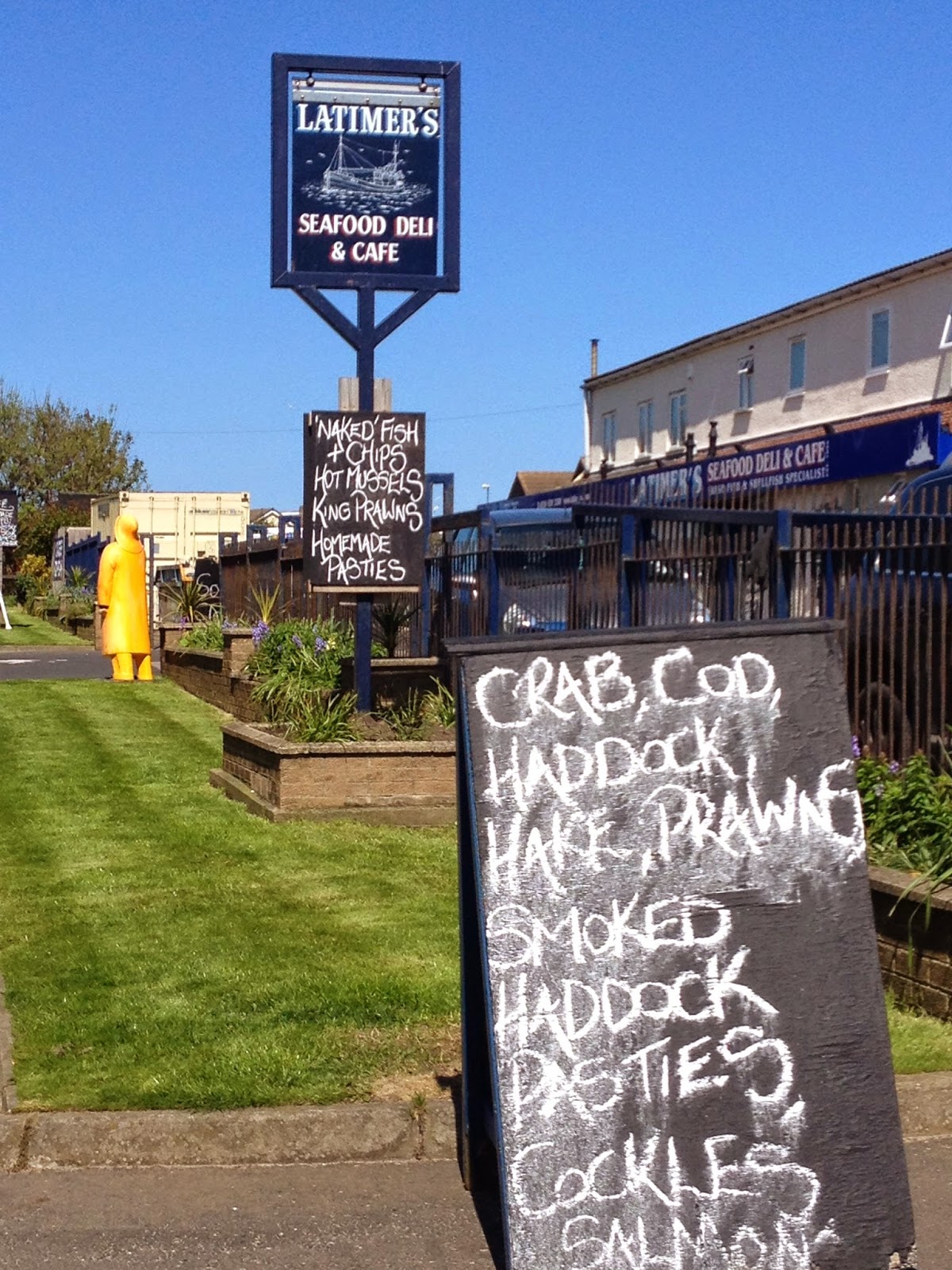 
There’s nothing finer in life than a long walk by the sea with a dog. Provided there’s a dog-friendly pub or café at the end of it, preferably with very good food.

On a warm sunny day, the North East coast is the best in the world. You may recall we had one a few weeks ago, a warm sunny day that is. That was the day Mrs Diner and I took Diner Dog to Whitburn. We were in search of fish.

Not just any old fish, but reputedly the finest fish in the North East. Our goal was the award-winning fishmonger that has won the custom of Terry Laybourne and Jesmond Dene House Hotel. It’s a place of pilgrimage for fish lovers: they sell fish brought in by the day boats in the harbours up and down the coast, from Eyemouth to Whitby. They also have a café. 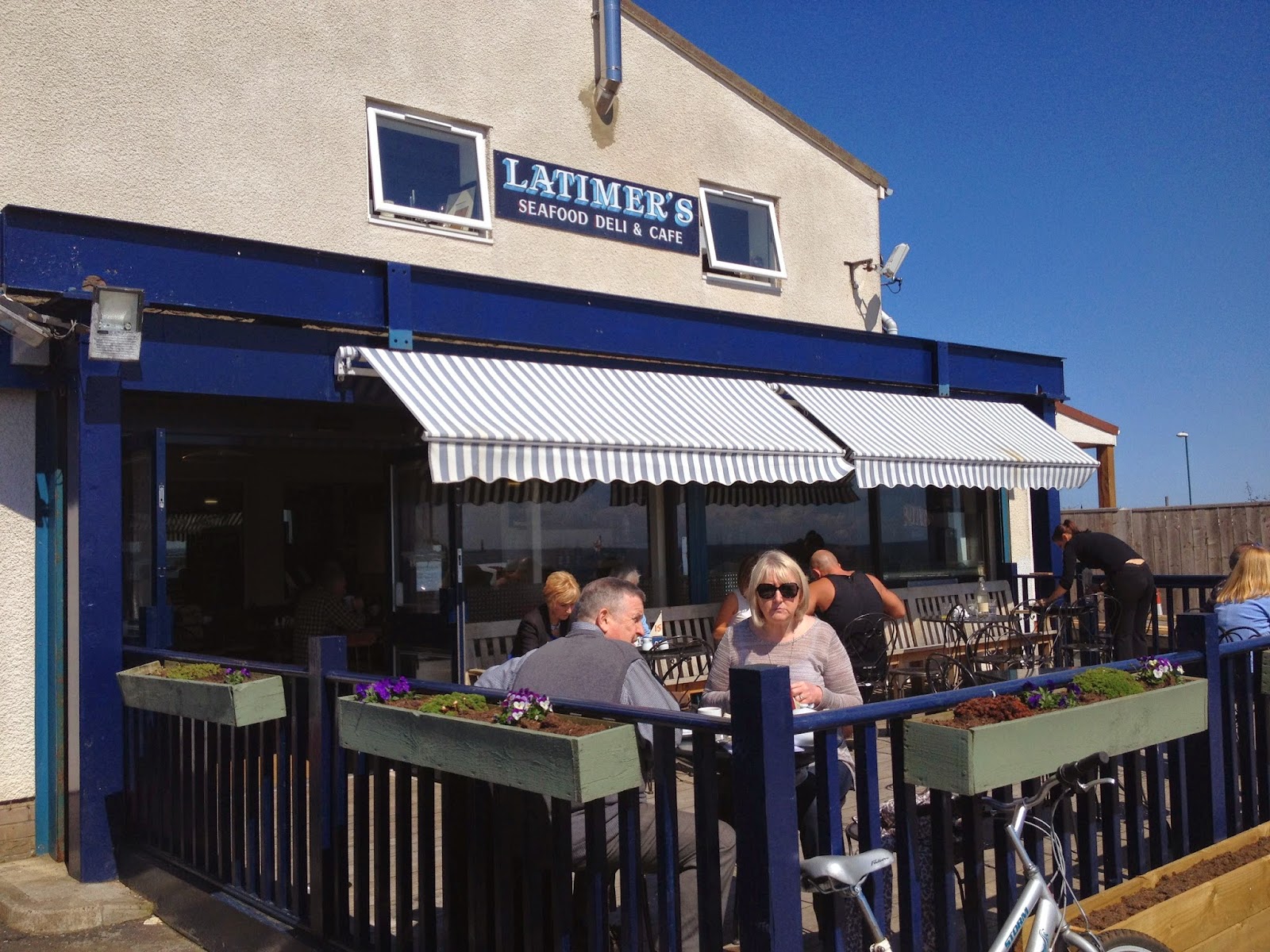 Robert Latimer opened his fish shop ten years ago on the site of the old garage that his grandfather reputedly build from the pebbles and sand on the beach. Robert was a fisherman, working in Scotland until the EEC quotas made it unviable. He would sell his seafood from a fridge/freezer at the back of the garage. The garage soon became a shop.

Because Robert had excellent contacts with the fishermen, and because he could be bothered to get up at 3am every day to meet the boats and bag the best specimens, his reputation grew. Latimer’s turned into a destination fishmonger. Then, around 18 months ago, they added the café. 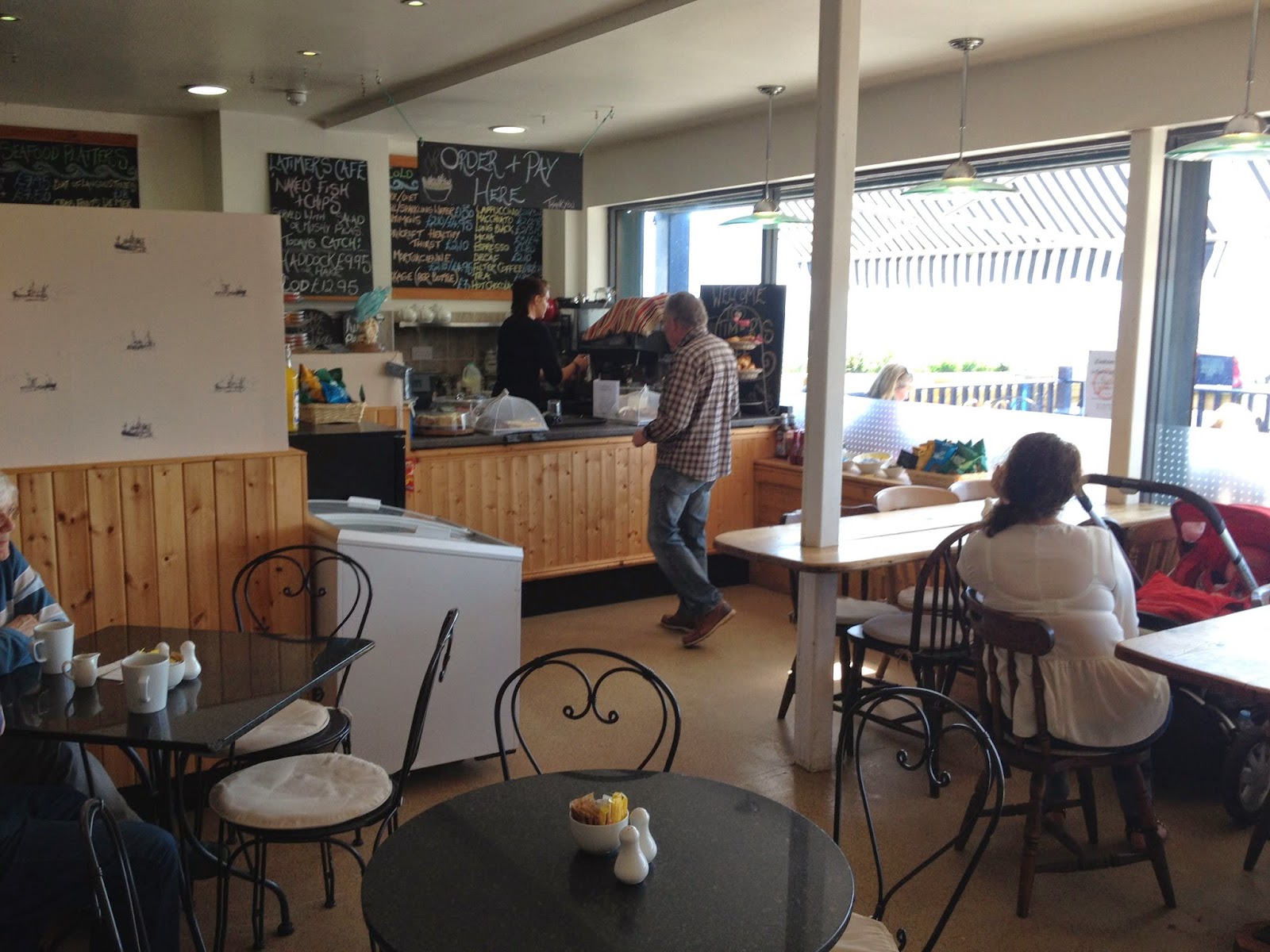 Now before I begin, I should warm you that this is definitely not a restaurant. It’s a modest café that only claims to offer a sea view with a good cup of coffee or a drink, home-baked cakes, soup and sandwiches, and very good fresh fish. Robert still goes to choose the fish from the boats every morning. He tweets his purchases to his regular customers, who then flood to the rather unassuming shed of a building to collect their catch. 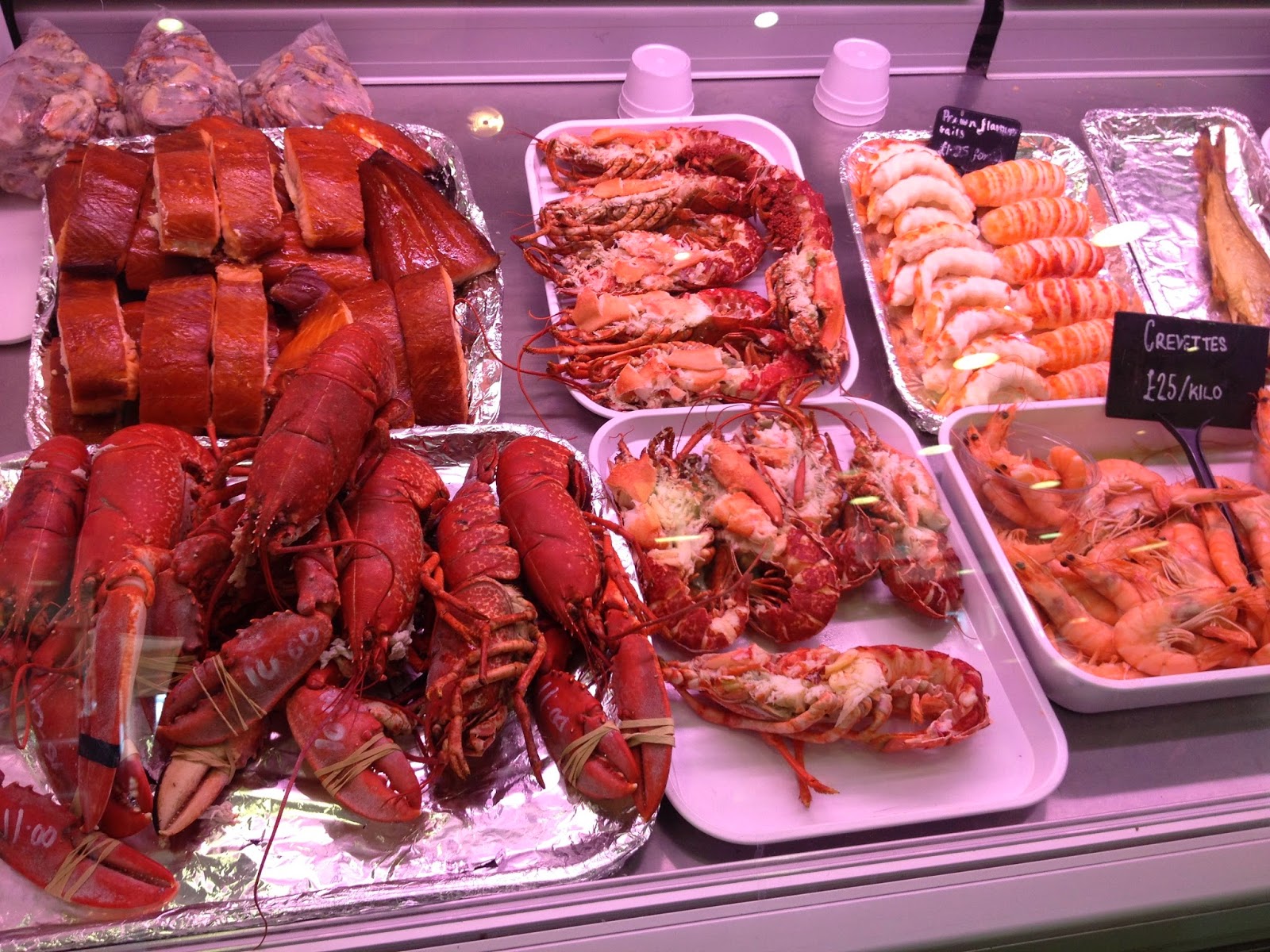 You enter through the fish ‘deli’ – a big refrigerated display of tempting produce, from lobsters and scallops to anchovies. I like to choose what I’m eating. On the menu there were Lindisfarne oysters (£13.50 a dozen), langoustines and lobster, smoked haddock pasties (£2.95), scallops and moules mariniere (£8.50), crab sandwiches and a chicken and bacon sandwich for the non-fishy. 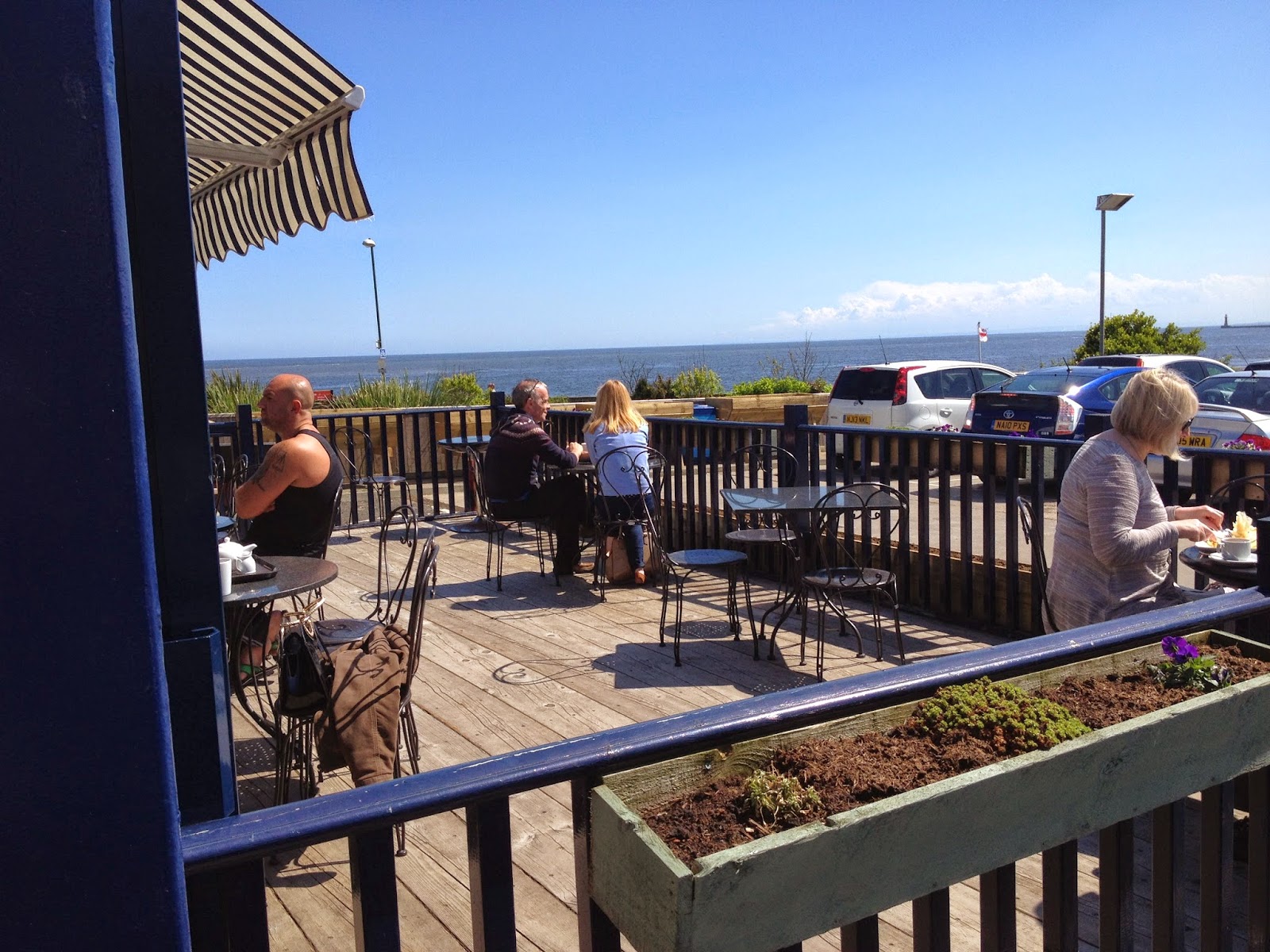 Outside, there’s a large decked terrace overlooking the beach. That’s where Diner Dog had dragged us after the walk, to a conveniently placed water bowl beside a shaded table.


You order and pay at the counter, where there was a buzzy atmosphere, with knowledgeable staff and equally well-informed customers. Either Whitburn is full of fish connoisseur residents, or, people had travelled here from afar. I suspect a bit of both. 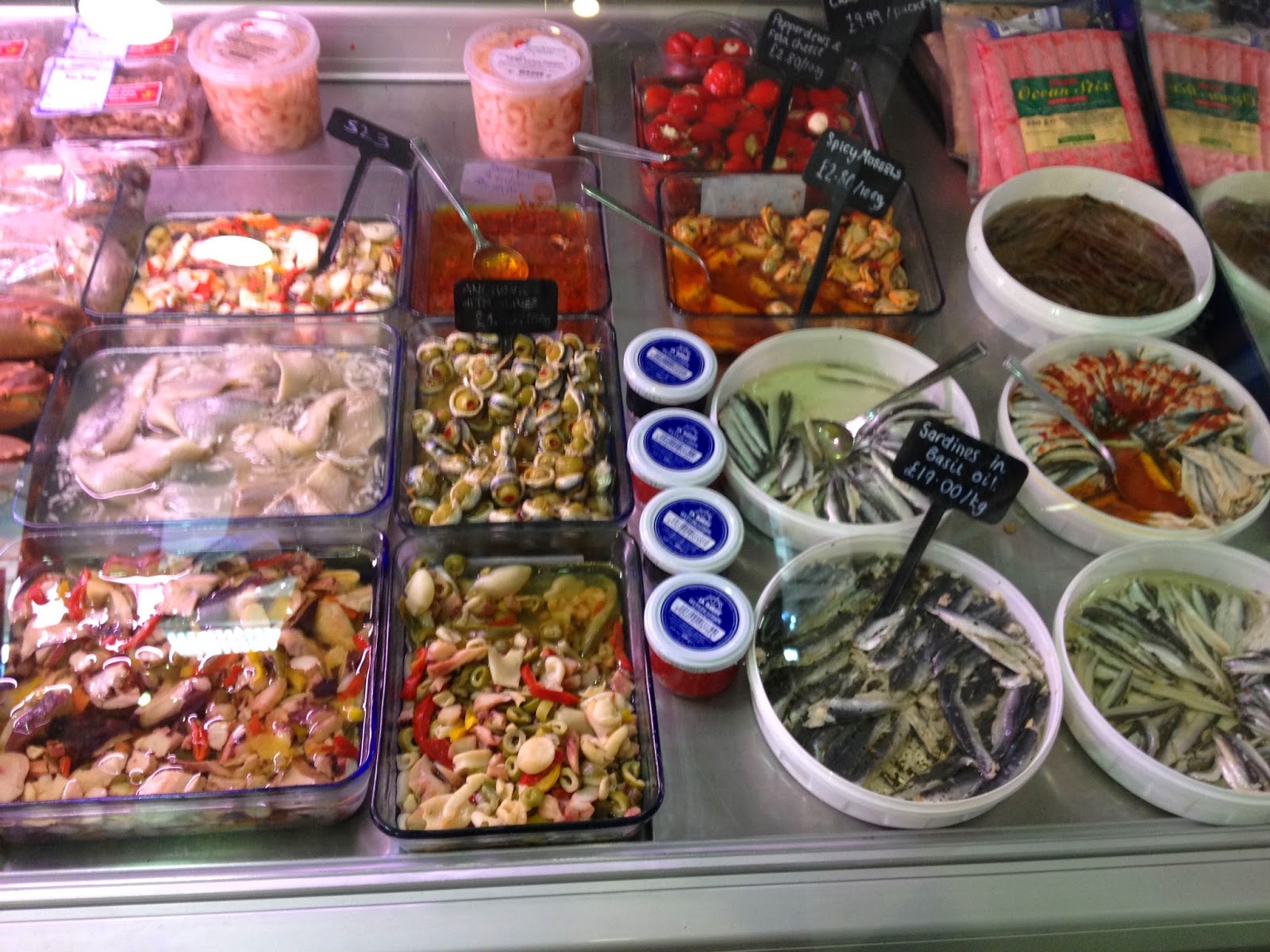 Some were there for the cakes and scones (Mary Berry would have been impressed by the array of home baking on show); but most were there for the fish. Everyone seemed to know their dorsal from their adipose – or at least turbot from plaice. This was pleasing to see, in a world where high street fishmongers are rare, and the only person to sell you pre-packaged Greek seabass is a clueless supermarket assistant. It’s a terrific selection. 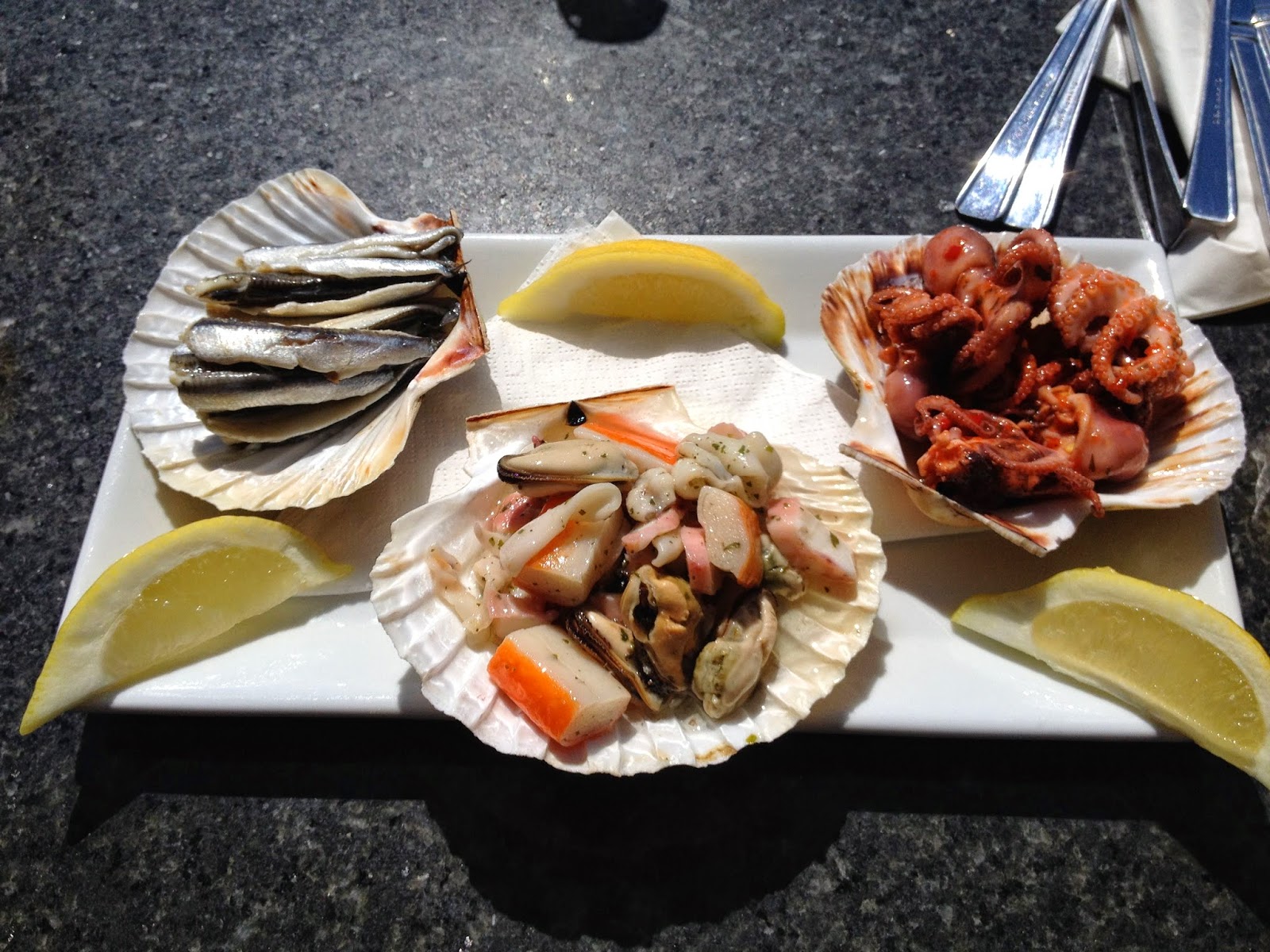 We started with tapas shells (£2.95) of salted anchovies (not quite salty enough) and some very good spicy octopus. There was a juicy seafood salad with light vinaigrette. Nothing fussy or sophisticated, it’s simple cooking done rather well. 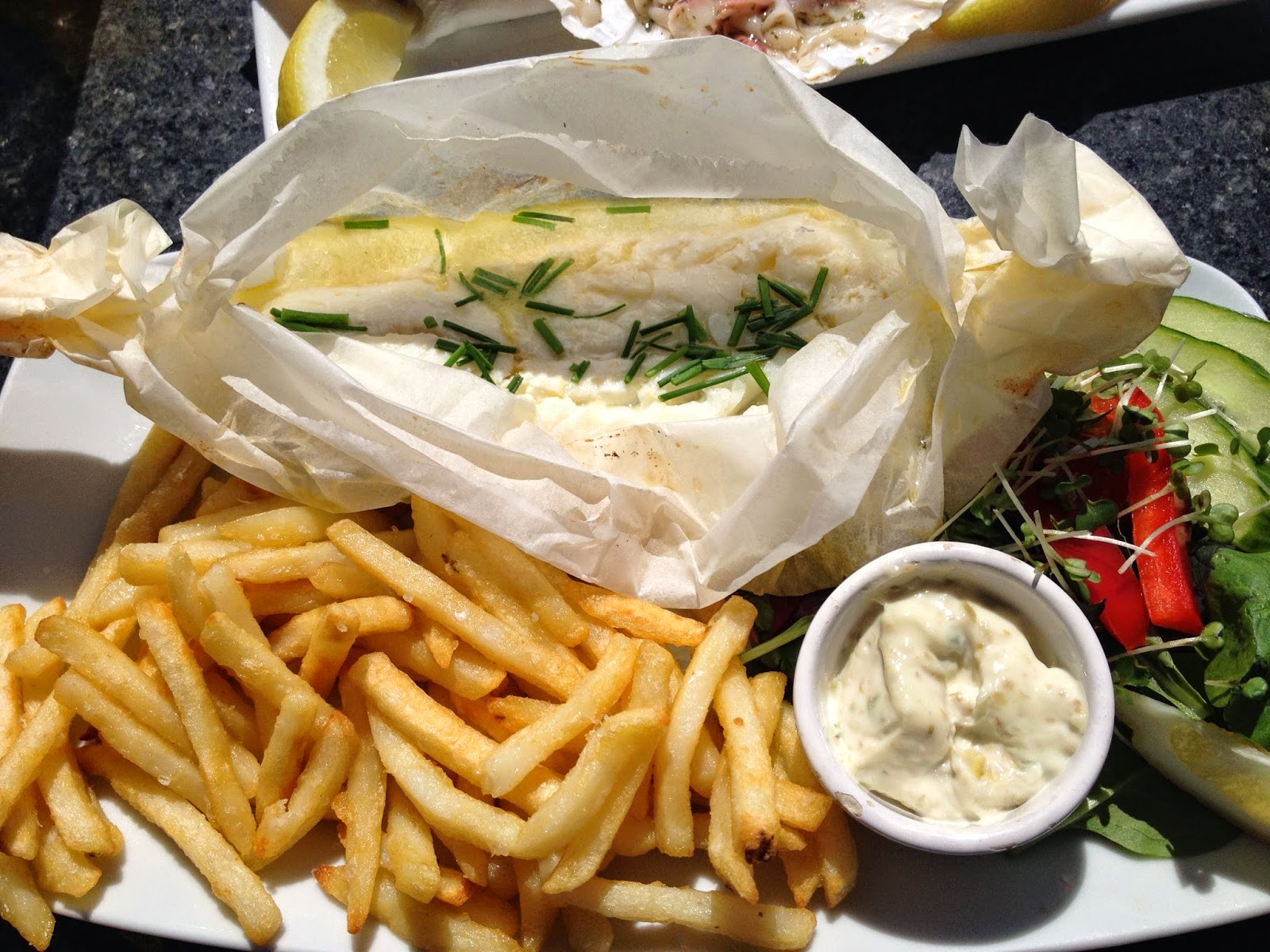 I then had what the menu described as “naked” fish and chips. This was cod en papillote (or, as the waitress described it, “cooked in greaseproof”, which was accurate but a little less glamorous). This fresh, moist wonder had been steamed simply with lemon butter and chives. 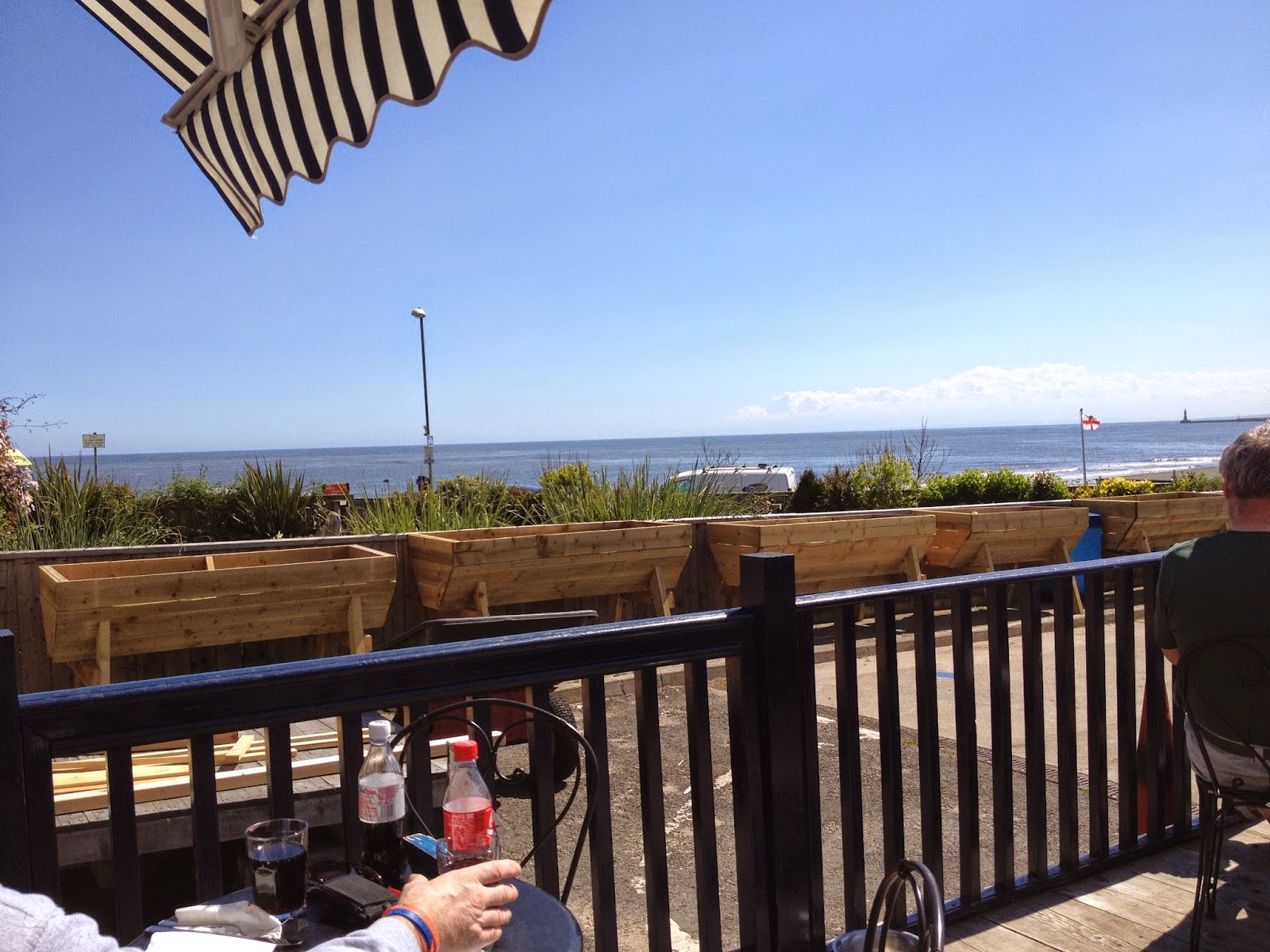 There on the terrace in Whitburn, with the sea air and the warm sun, I almost felt I was dining in Cap d’Antibes. Almost. 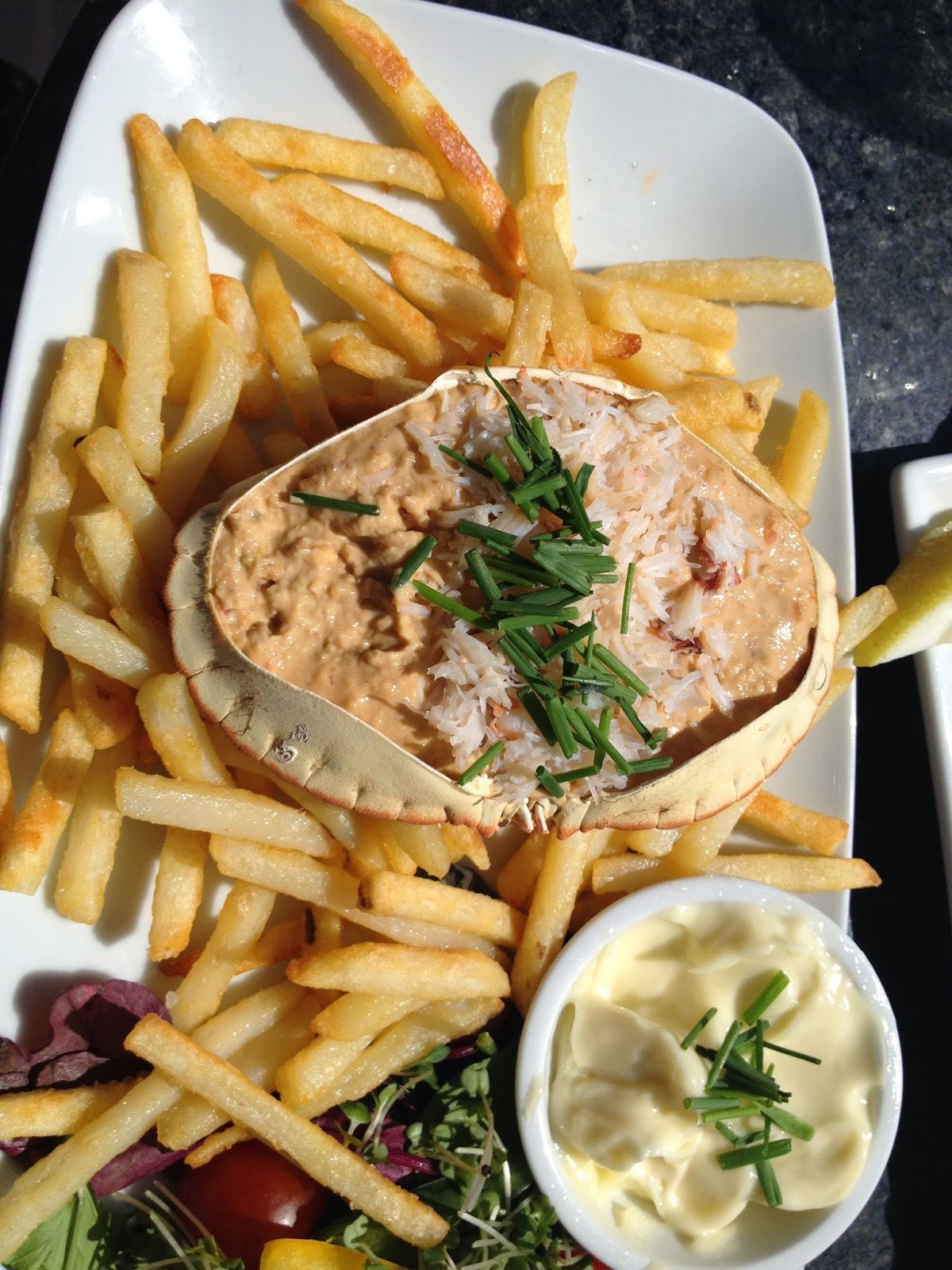 There were skinny chips, which were sadly rather soggy. It’s a shame they can’t get their chips right – I suspect a lot of Tripadvisors will complain about them. Diner Dog loved them. However, I was content with some rich tartare sauce, and a nice, neatly presented salad garnish.

Mrs Diner had crab and chips, which she enjoyed with mayonnaise and bread. 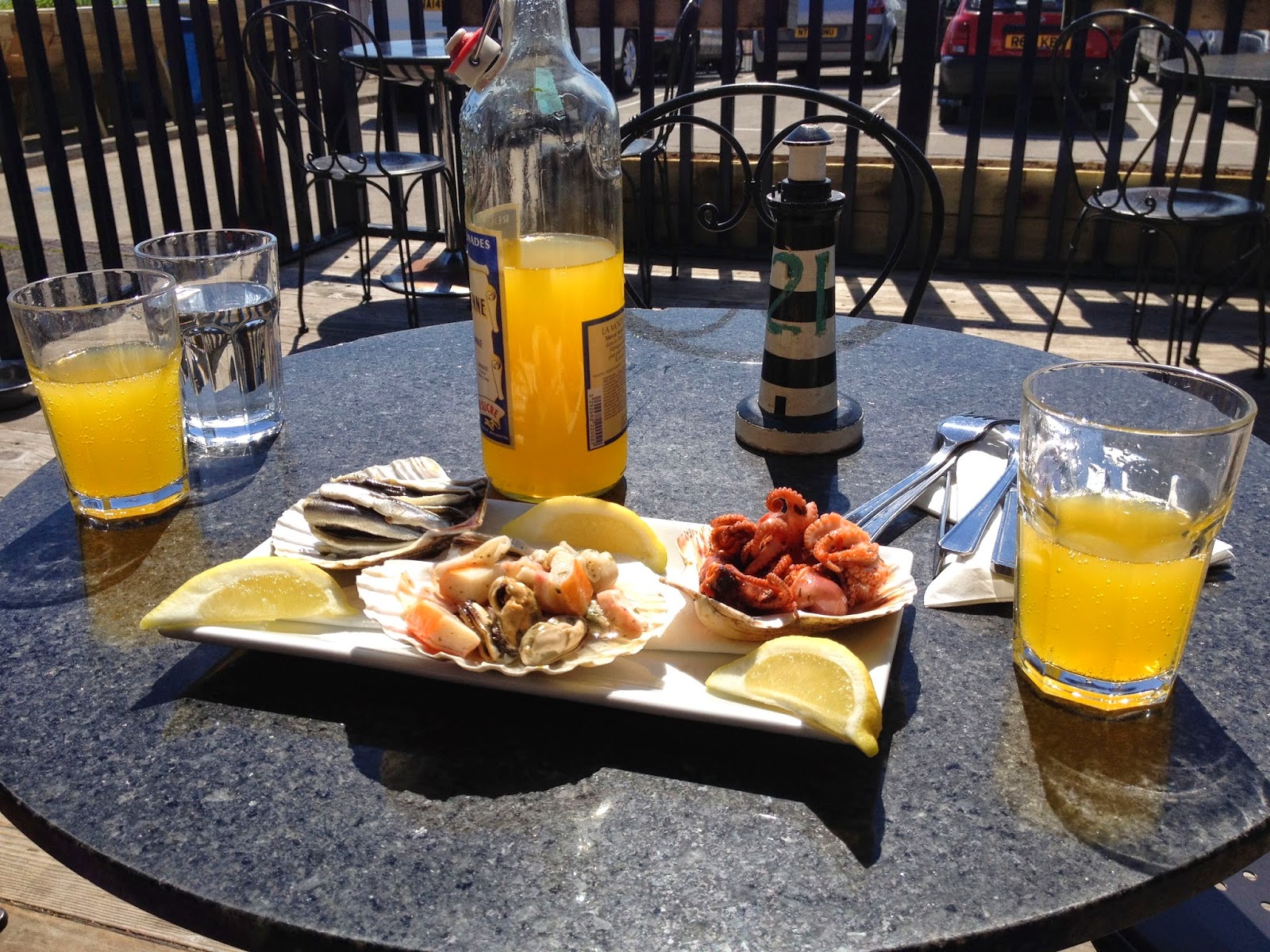 We shared a bottle of French lemonade (the kind with the big bottles and Grolsch-type caps) and wrote a big mental note to bring our own Riesling next time (£3 corkage).

Afterwards we bought a mound of cakes to take home to the Junior Diners: carrot, lime and raspberry, millionaire’s shortbread, lemon curd. Actually the lemon curd never made it home. Sorry, kids – that was our dessert.