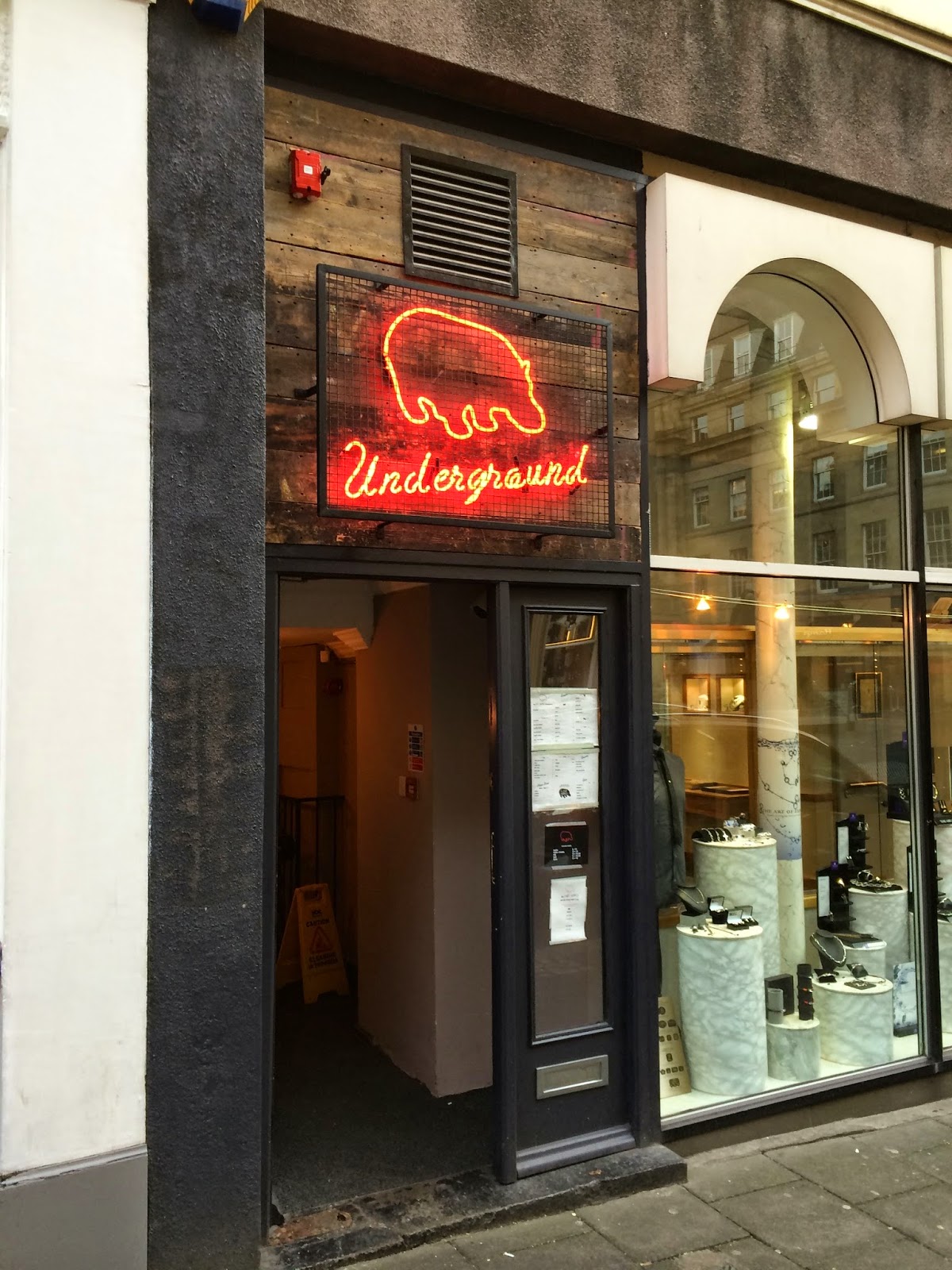 Ever since I described the North East as a burger desert, I’ve received a steady stream of recommendations, for which I’m grateful.

Until I discovered Lane7, a pretty authentic American diner disguised as a bowling alley, I’d despaired of ever finding a decent burger in the region. Afterwards I declared, with some confidence, that Lane7 has the best in town.

Despite some strong competition from DatBar next to the Theatre Royal, where the meat from Peter Hannan’s Himalayan-salt-infused beef is first class, I have yet to be proved wrong. However there’s been a steady grumbling of disapproval from a few who say I hadn’t given the Fat Hippo a try. 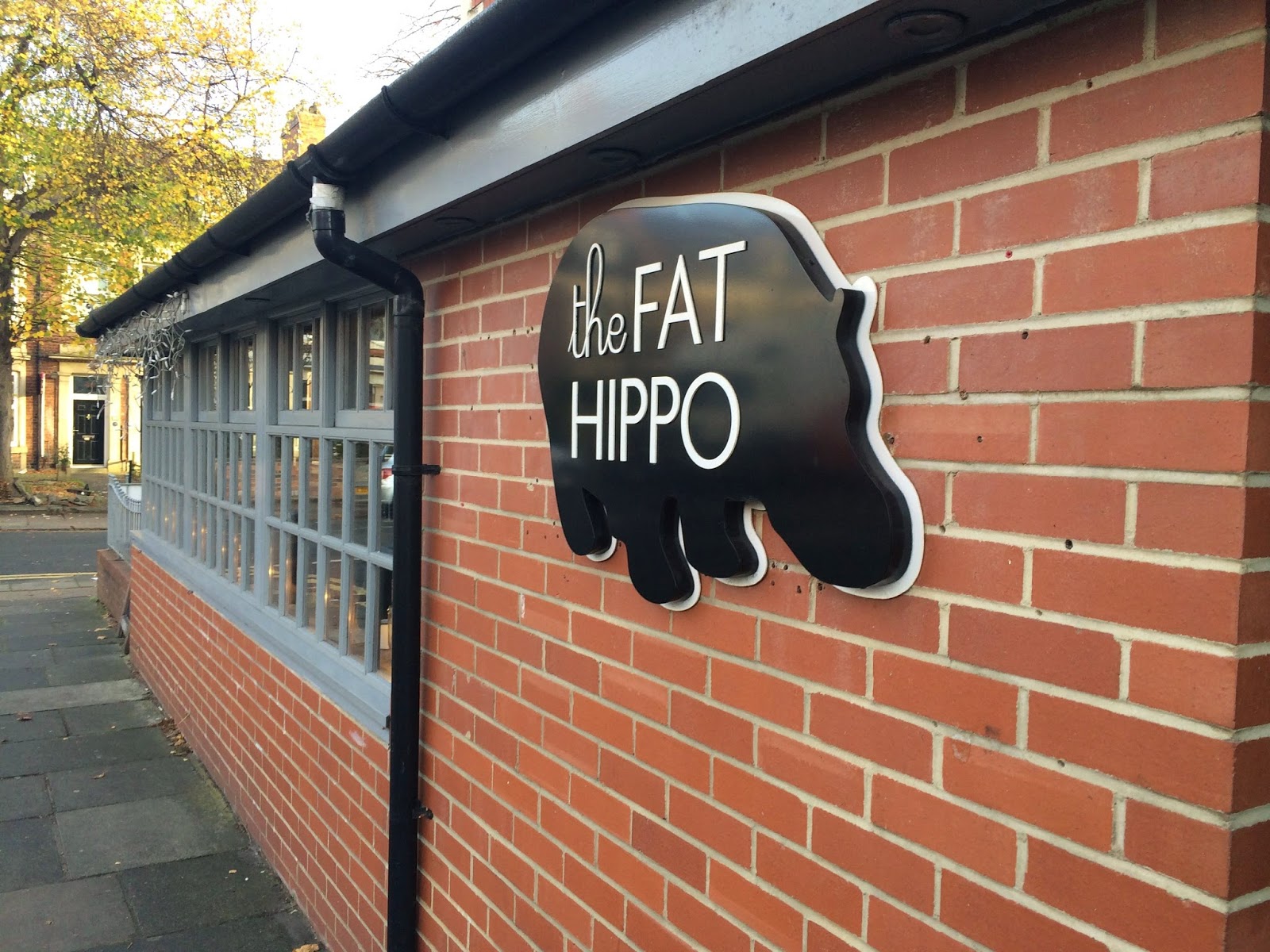 This is a small burger joint in Jesmond with a loyal student following that, earlier this year, expanded to the heady depths of a cellar in Shakespeare Street, off Grey Street. To be fair to the hippos, I visited both branches. 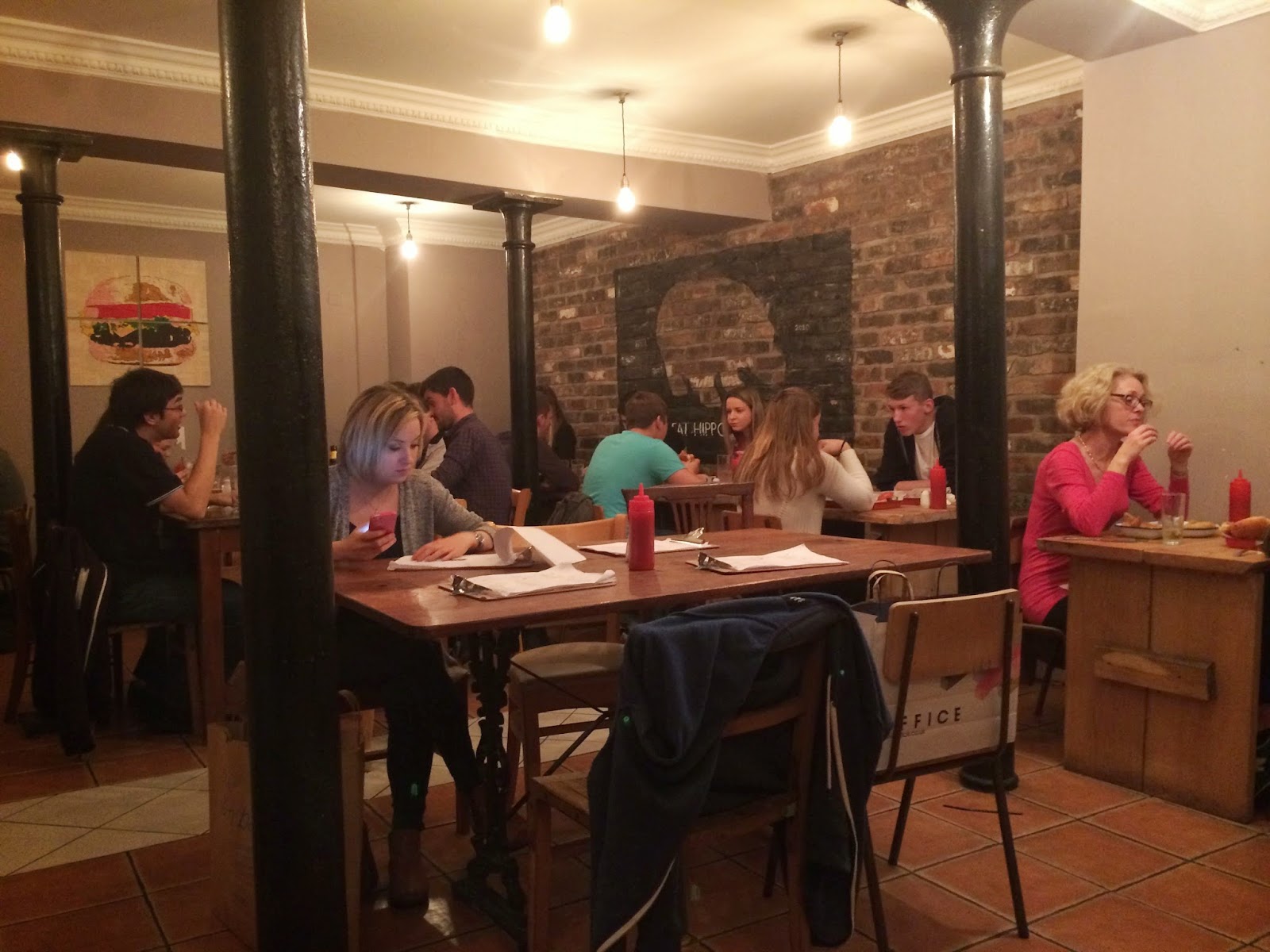 They have identical menus, both in content and cleanliness. Call me old-fashioned but, in my view, clean menus matter. There’s a reason American diners have laminated ones, or are replaced daily. Burgers and hotdogs are eaten by hand, which means that contact with other people’s germs ought to be avoided. Yet both restaurants presented me with such worn, grubby pieces of paper, stained with what looked like years of student grime and worse, I had to wash my hands between ordering and eating. 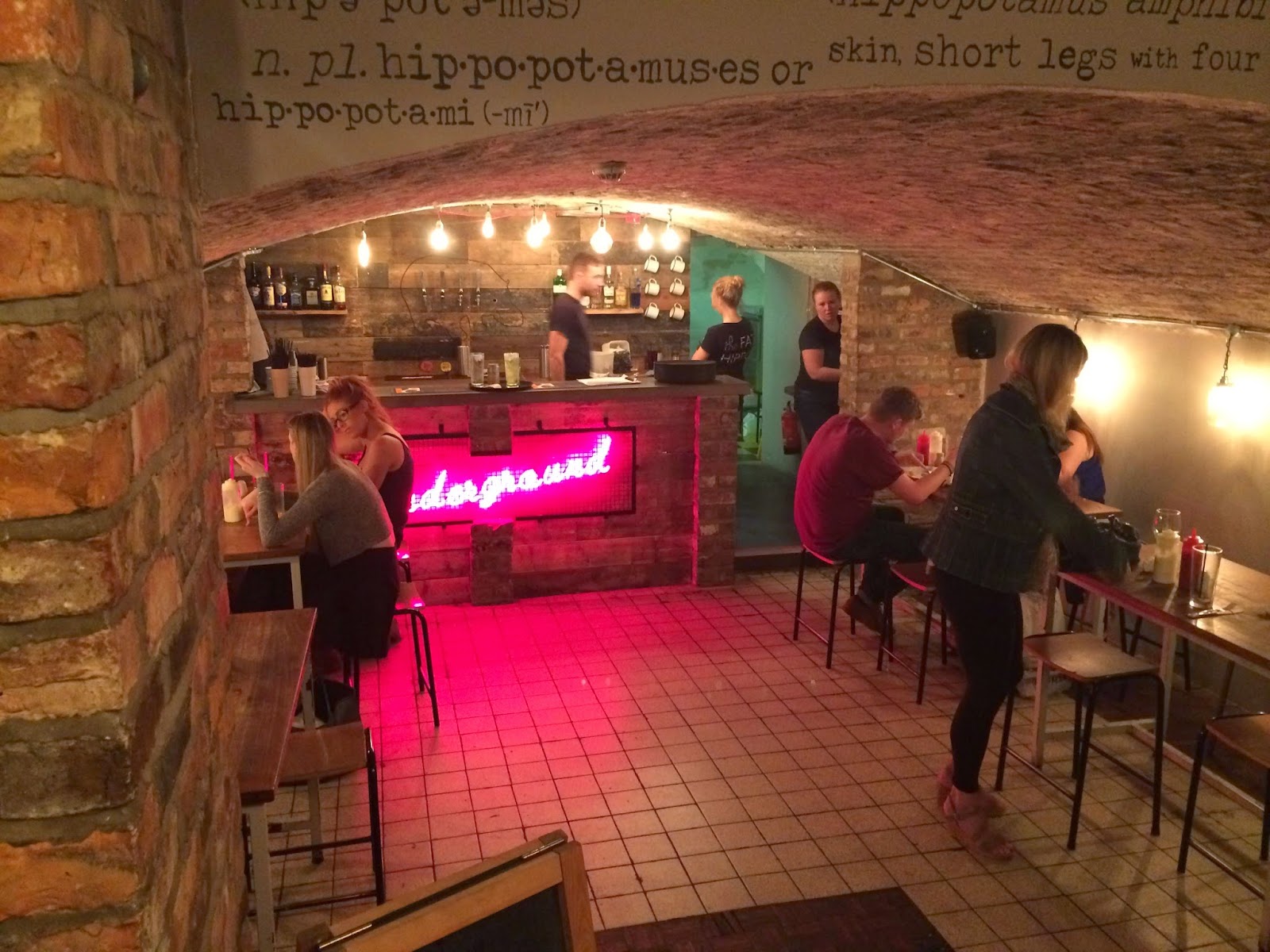 If the menus were grimy, so, too, were the facilities. Both needed a good dose of Flash, and, in the case of the Hippo Underground, a new hand dryer.

Is it a pre-requisite of a student-targeted restaurant that the interior should be as unkempt as its customers? The gents’ loo in the Jesmond branch looked as though it had been decorated by an all-night “bring a brush” party.

Yes, I know, I’m sounding even grumpier than usual, but I believe that a tidy front of house is almost as important as a hygienic kitchen, even in a restaurant that pretends, by its décor and untrained staff, to be a student dive.

But enough of the griping – to the meat of the review, which was very good indeed, even though no one serving could tell me its provenance, other than “Northumbrian” (indeed the website describes the meat as “inspired by Northumbrian meat”, which didn’t inspire me at all as this could have meant anywhere, even though it was “ground daily”).

In fact, if a burger joint were judged purely on beef, this place would have 5 stars. Curiously, the Jesmond branch serves proper half-pound burgers, whereas the Underground version comes in two thin patties, like a McDonalds, even though both were properly cooked medium-rare. We started underground, with deep-fried gherkins and buffalo strips to begin. The gherkins were cut nice and thick, but with a heavy batter, served with sour cream and some pointless undressed iceberg. 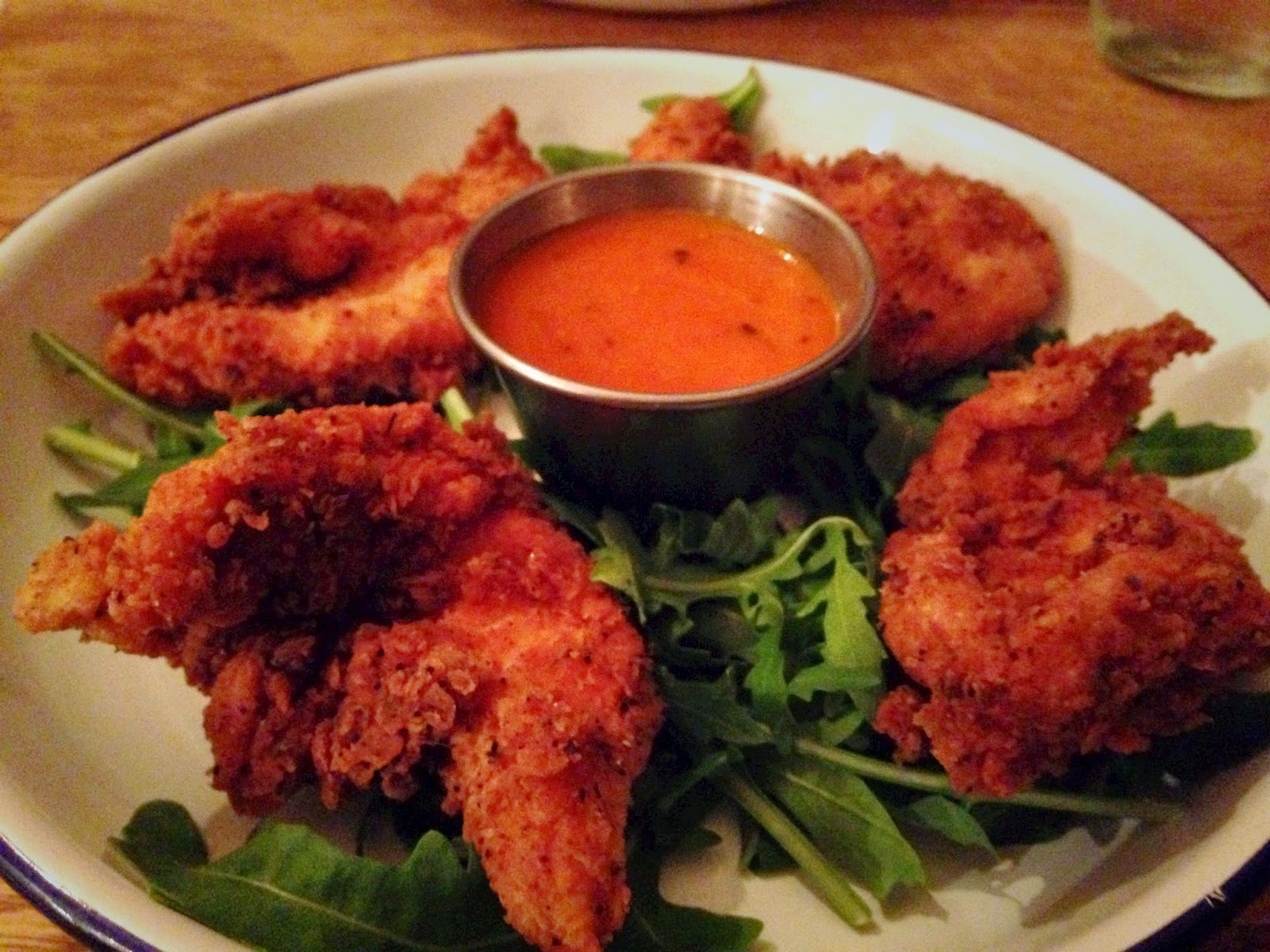 Buffalo wings were also deep-fried, on undressed rocket, with an unpleasantly raw spicy sauce, which made me crave a proper blue cheese dip. 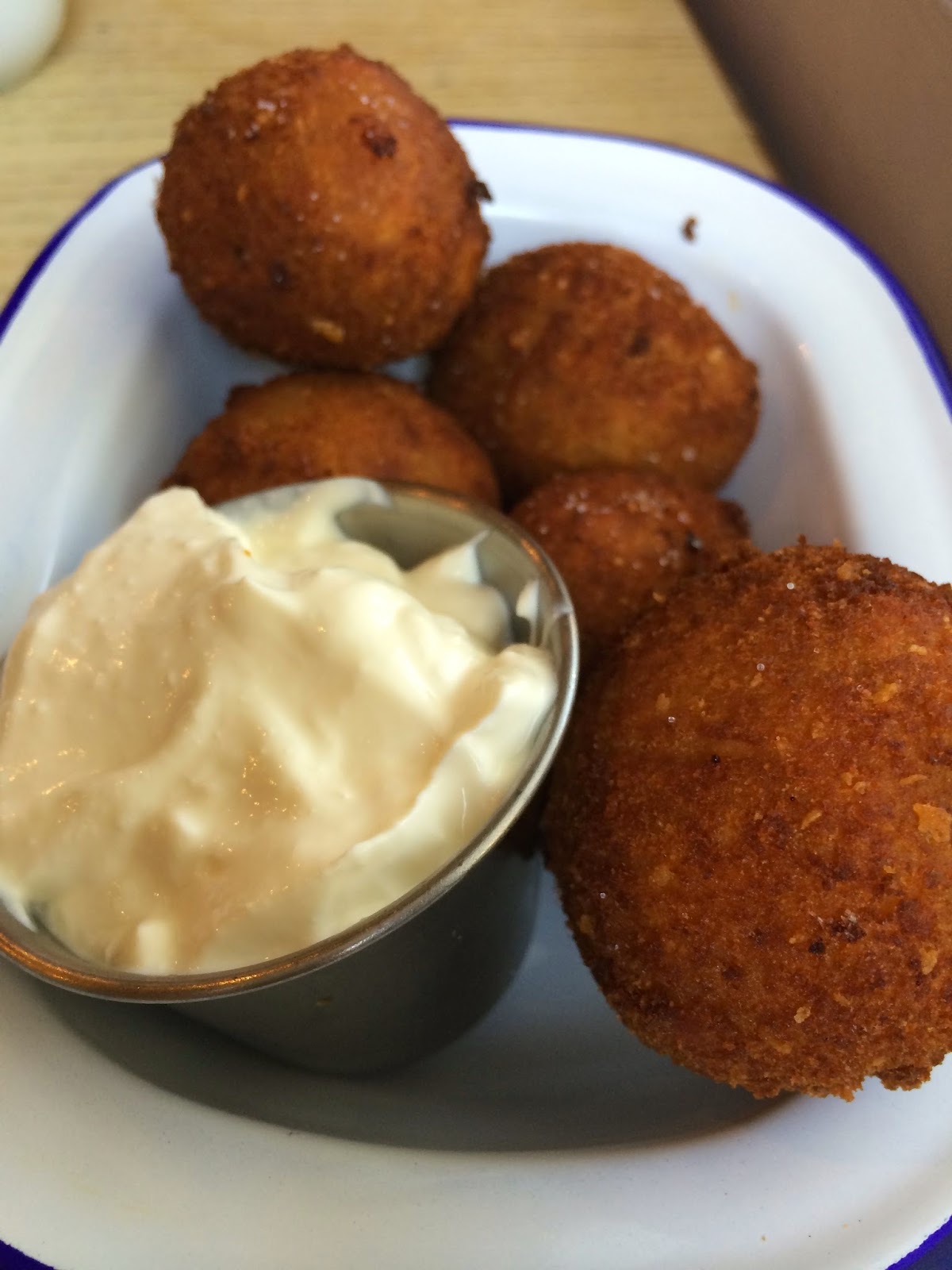 Our other starter was in Jesmond, where we had jalapeño poppers, which weren’t jalapeño poppers at all (they should be whole peppers stuffed with spicy cheese and then fried or baked) but crispy fried spicy gunk. They were nicely crisp, but the inside was cloying.

So to the burgers: these were pink and moist, just as the signs on the wall promised, doubtless to encourage adolescent giggles. However, given that this is a specialist burger joint, I do have some issues. 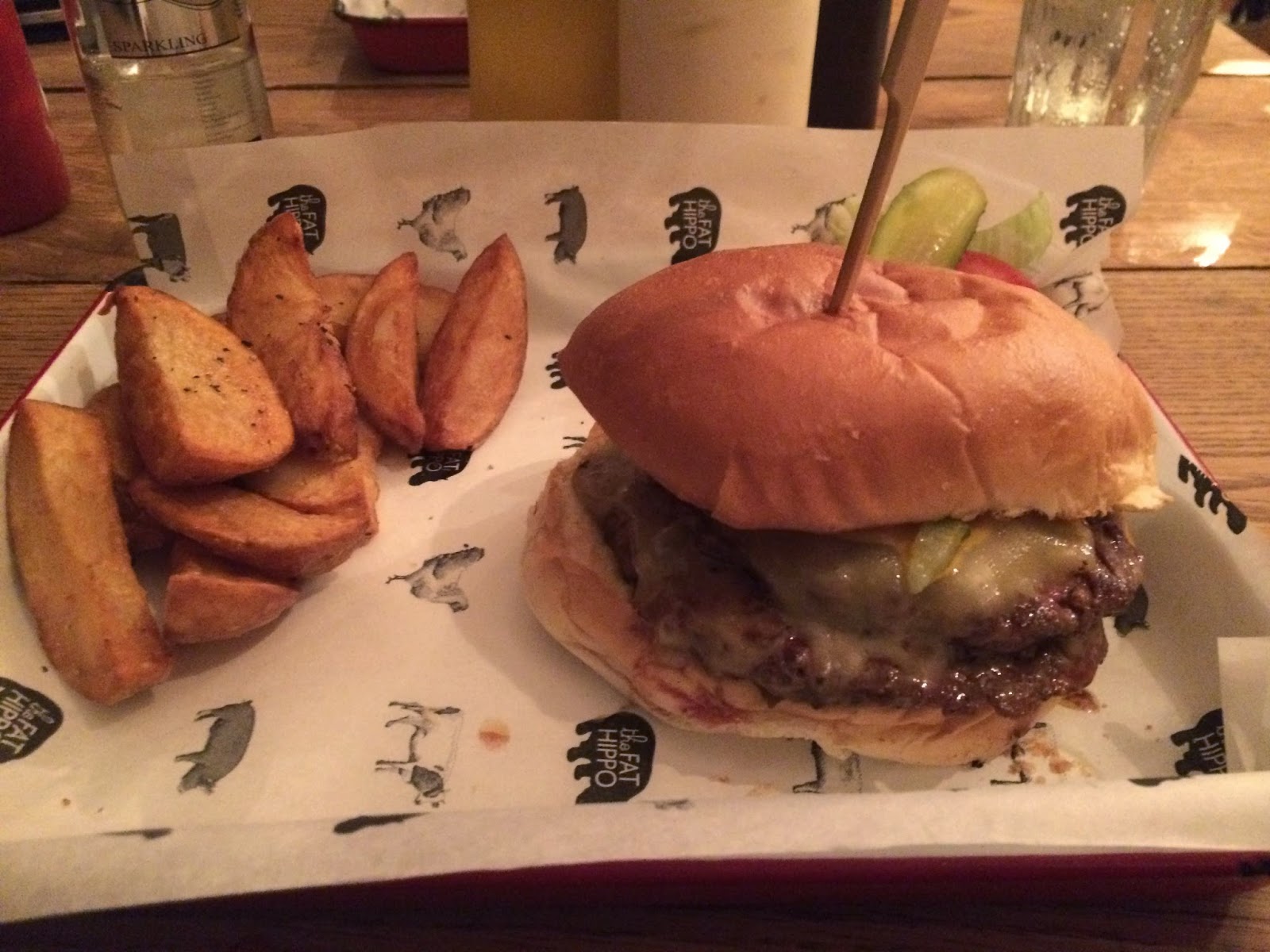 The ‘American’ promised cheese, gherkins, French’s American mustard and ketchup. It came with a thin layer of cheese, with gherkin and more wretched Iceberg on the side. This is no more American than the hippos in Moscow Zoo. Sure, it was Monterey Jack cheese, but of the mild processed kind that comes in square packets in American supermarkets.

This burger would be laughed out of any modern American diner. It needed caramelised onions, mayo, sharper cheese and a much better bun, for the bread was faux-brioche, not the real eggy deal, its top clumsily crushed down by the weight of a bored cook’s fist. 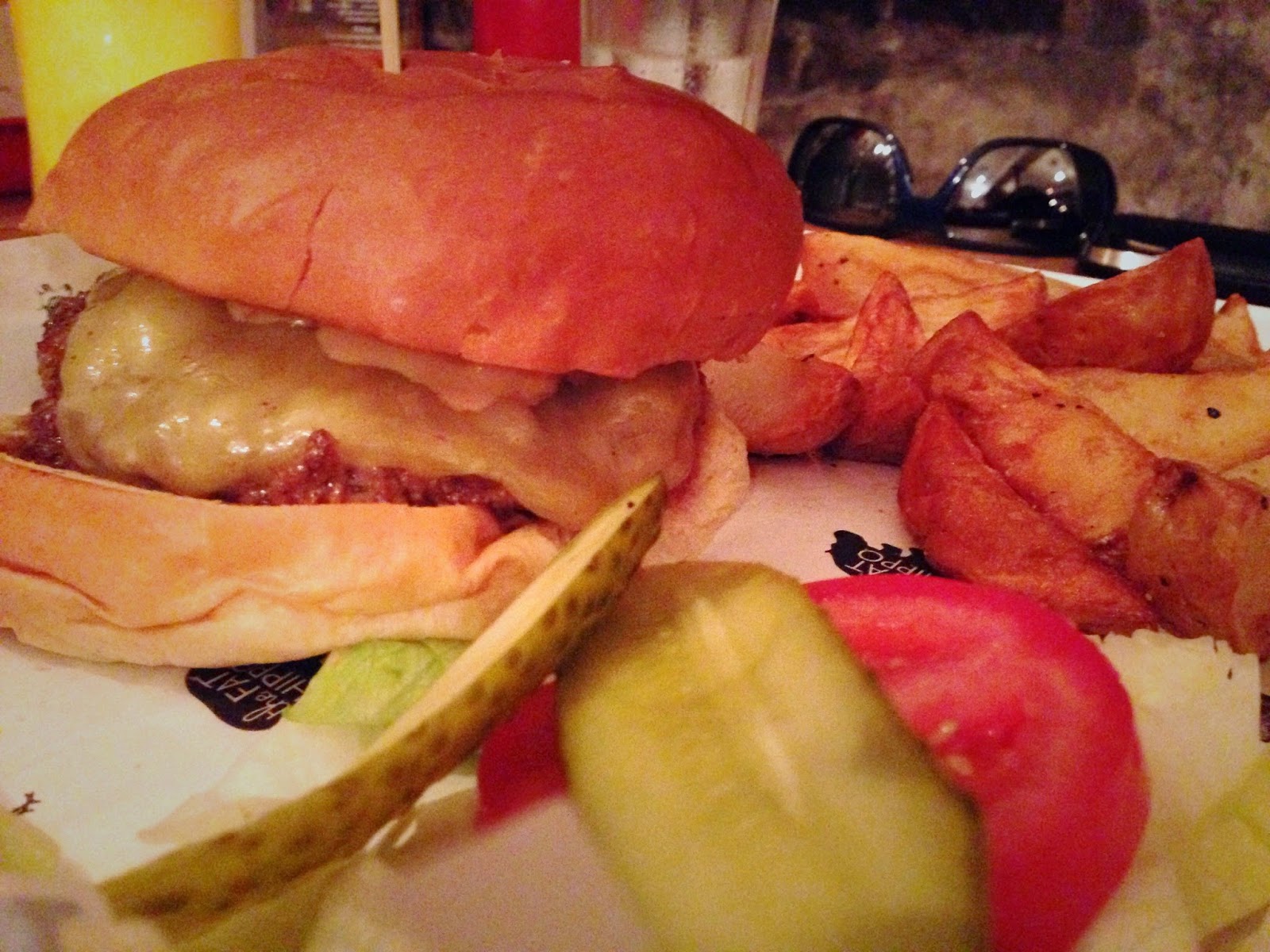 Mrs Diner’s, called PB & J, was peanut butter, cheese and bacon jam, rather than sweet jelly. It was bland, served with chips still greasy from their third frying.


In Jesmond, which I visited after our underground experience, I gave the hippo burgers one last chance and ordered a Stinky Pete. 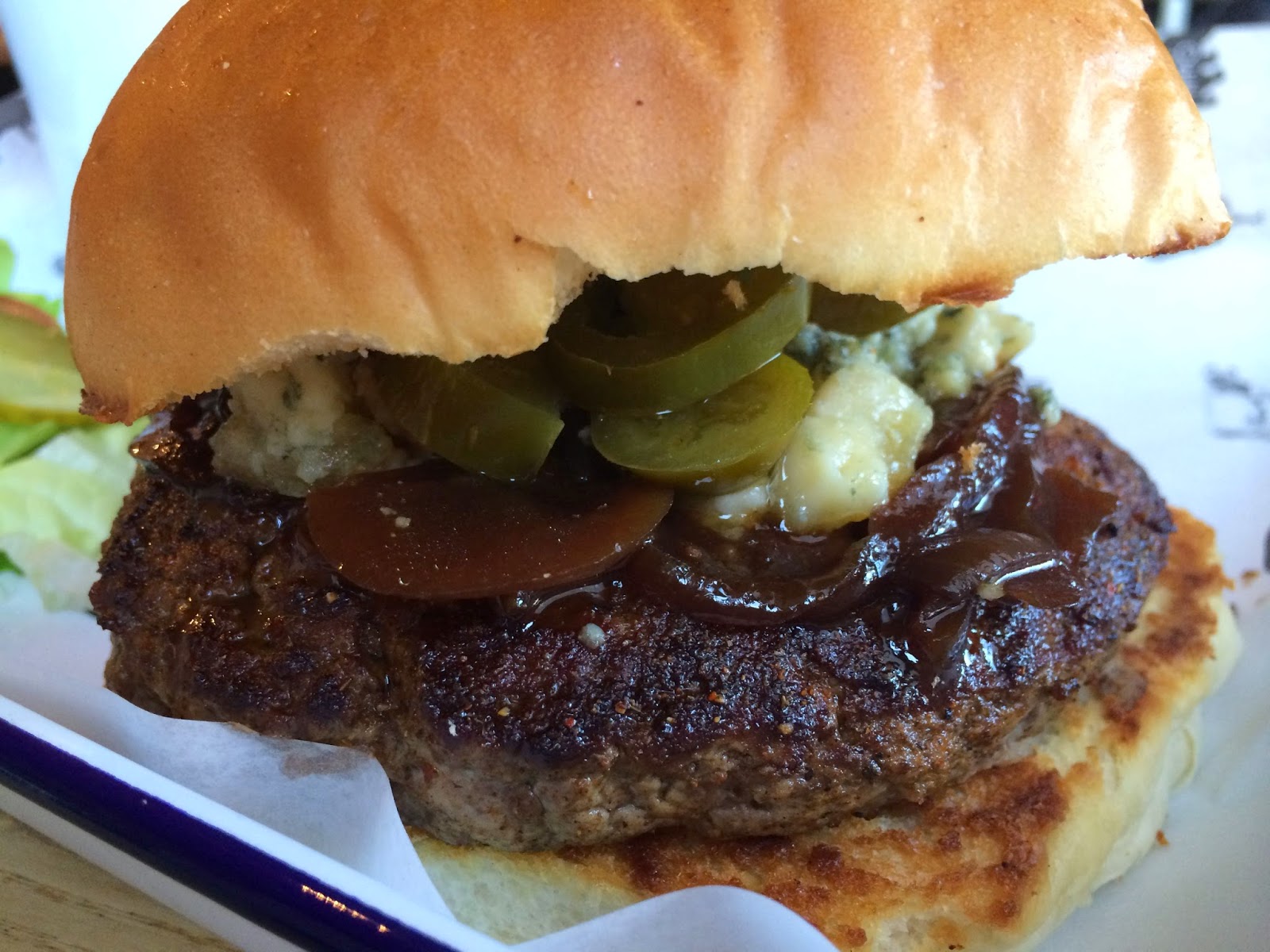 I don’t know who Pete is, but, apart from a false start (it arrived medium and had consequently lost both moisture and flavour, but was quickly if unapologetically replaced), his burger was the closest we came to an authentic burger experience. Lumps of blue cheese (which ought really to have melted) blended well with jalapeños and very good caramelised onion marmalade. 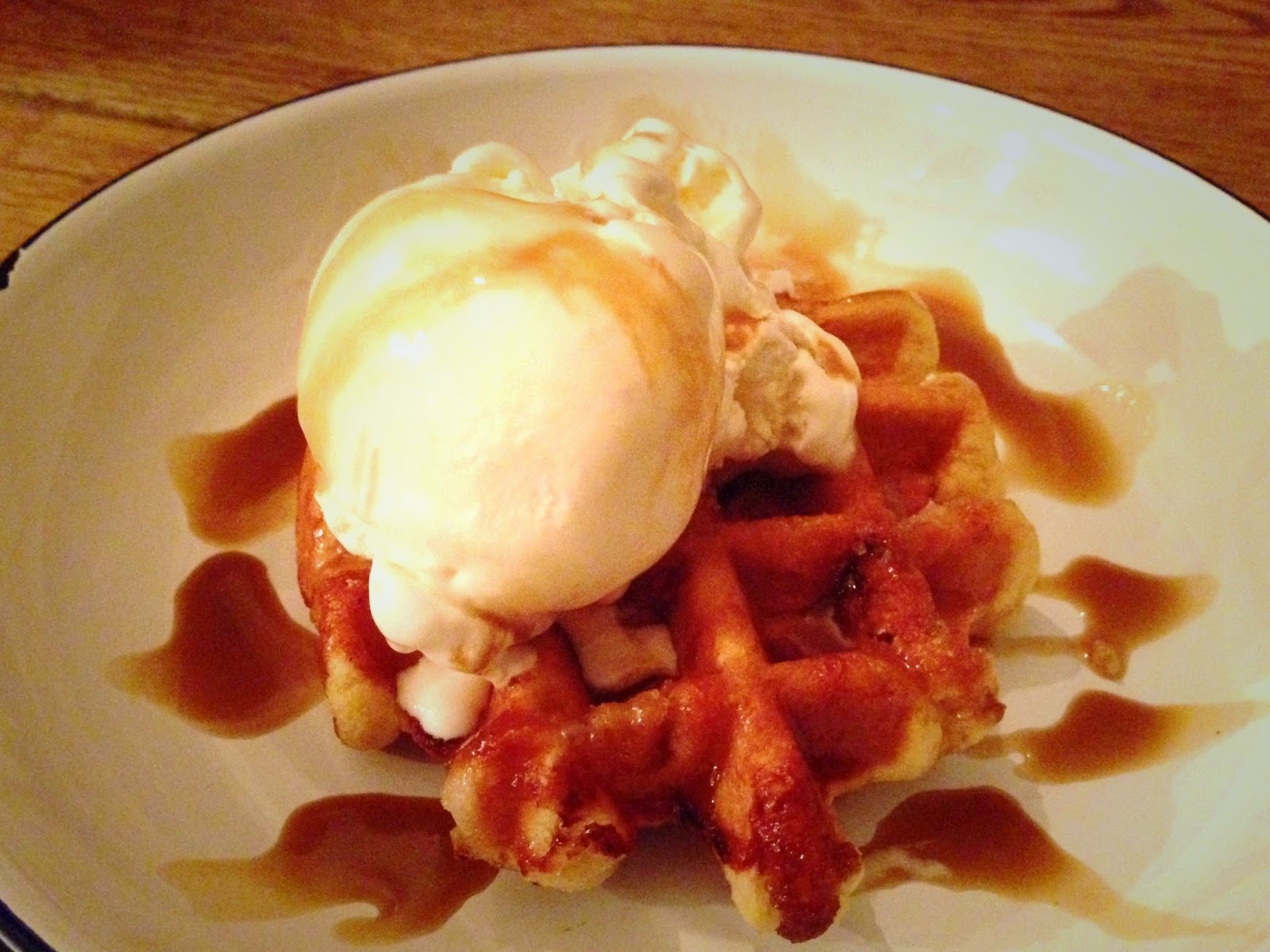 We only tried one dessert, an indifferent Belgian waffle. The house wines (only two choices of each) were described as ‘plonk’, which did them a disservice. Both red and white were palatable and cheap, at just £2.60 a glass. Burgers were around £9 each.

I do recommend the Hippos if you’re a hungry student – but don’t bring your Granny.