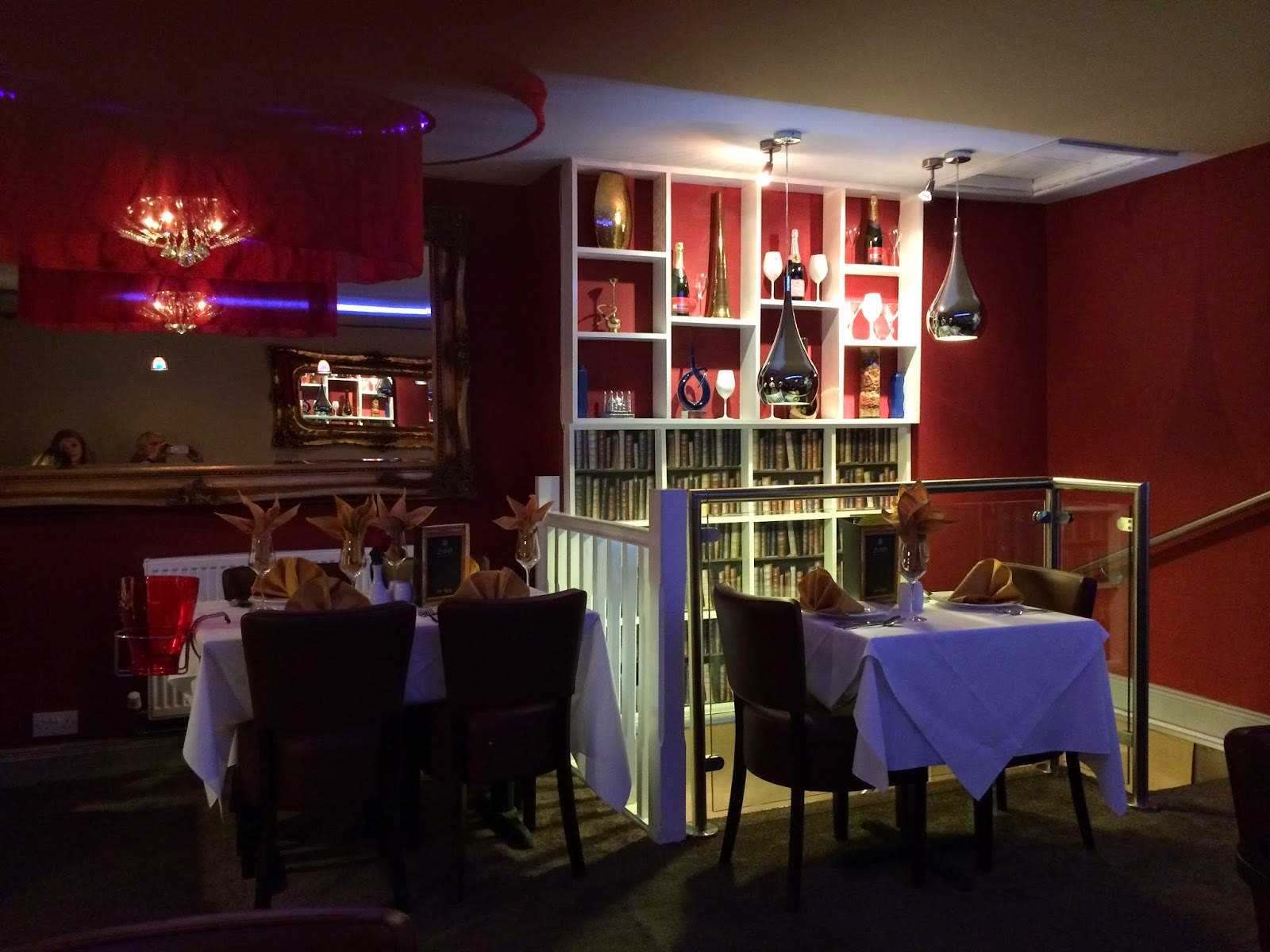 
There are several Indian restaurants in Hexham’s Priestpopple. I’m using Indian in the loosest sense, of course, because 80% of British curry houses are actually Bangladeshi.

We should be extremely grateful to the nation of Bangladesh for giving us our national curry craving. Except that, of course, to describe any dish as ‘curry’ is pretty meaningless: the word on its own gives no indication of a dish’s origin, taste or recipe. We use it as a generic word for a thousand different sauces.

One of the problems of having so many curry houses in every town in the land is that everyone is a curry expert.  People get hung up on their favourite local vindaloo or korma, and judge everyone else's against it.  Which is crazy.

Decades ago I was taught how to cook Goan Fish Curry by some fishermen on the beach in Goa - they even shinned up a palm tree to fetch me a fresh coconut, ground all the spices on a stone and pulped up some fresh tamarind with their toes (I think I'm exaggerating - it was a long time ago). Since then, I've tried, and failed, to find an Indian restaurant in the world that serves its equal. I never will succeed, but it hasn't stopped me enjoying some outrageously gourmet versions of this basic artisan dish over the years. When it comes to Indian food, we all need to broaden our taste buds, close our eyes and enjoy the spices.

These past few weeks, perhaps because this is the festival of Diwali (though I guess the Hindu Festival of Lights is of scant interest to the average Bangladeshi chef), or maybe because another dreary winter is on its way, I have been enjoying my own personal curry fest.

I’ve been visiting some of the country’s most glamorous: including Gymkhana and Trishna in London, which have both earned themselves Michelin stars and consequently set me back £100 a head, and other much less expensive but equally good dives, like my all-time favourite, a noisy pub at the end of the Jubilee line called The Regency Club, which has the best Kenyan Asian cooking you’ll ever find. It's worth the trip down to London on its own.

Back in the North East, I’ve dined again at Haveli, which is still gamely trying to persuade the residents of Ponteland to appreciate fine dining, though I see that they’ve now capitulated to the masses and added a “Curry Classics” section to their ambitious menu, so you can choose rogan josh and jalfrezi over their more ambitious and unusual specialities.

And then there’s Zyka. It has generated quite a loyal local following since it opened and several readers have urged me to visit. I’m very glad they did. 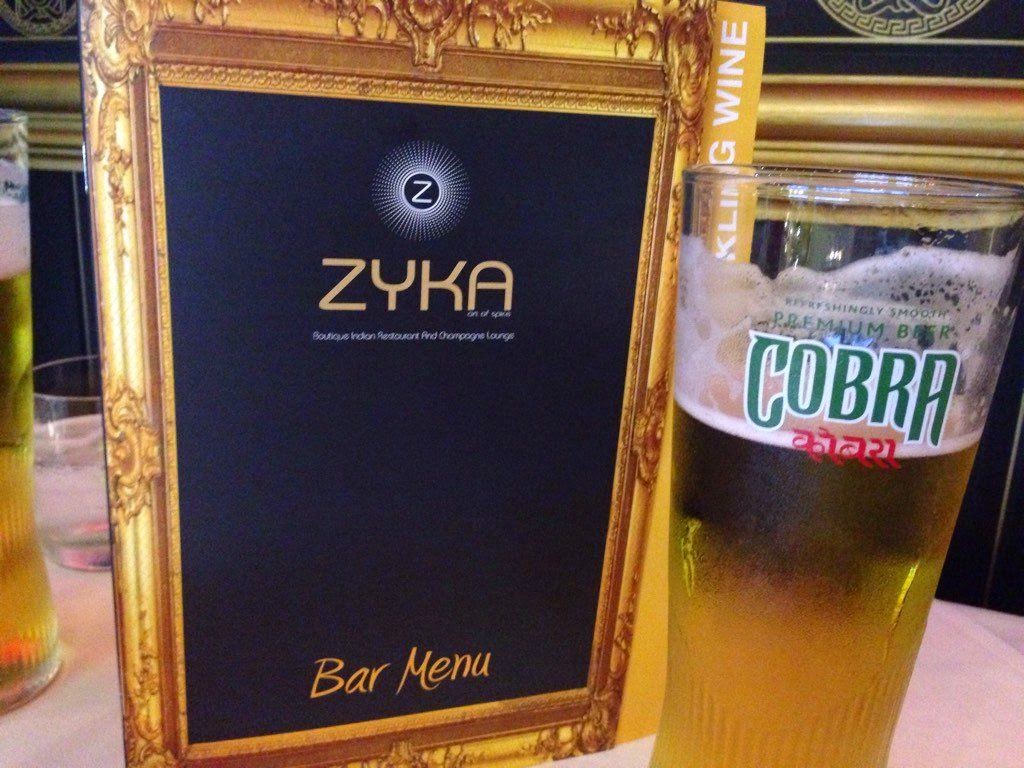 It’s cozy and atmospheric, almost clubby in style. Although it’s small, because of all the “traditional British” additions the menu is long, which makes you wonder how many sauces are sitting frozen, waiting for the microwave. But certainly what we ordered was both fresh and interesting.

Zyka obviously knows that some Hexham curryphiles will be judging it on basic Anglo-Indian standards, so it offers the usual onion bhajis, chicken tikkas, pakoras and mains like chicken tikka masala and so on. They call these “Great Britain’s favourite dishes with a twist and taste”. As to the taste, I leave it to the less ambitious to tell me what they’re like.  I went because I’d heard that the young chef, Khaled Miah (of Bangladeshi parentage, but from South Shields), was cooking much more interesting dishes with rare skill and freshly ground spices in his skillet. 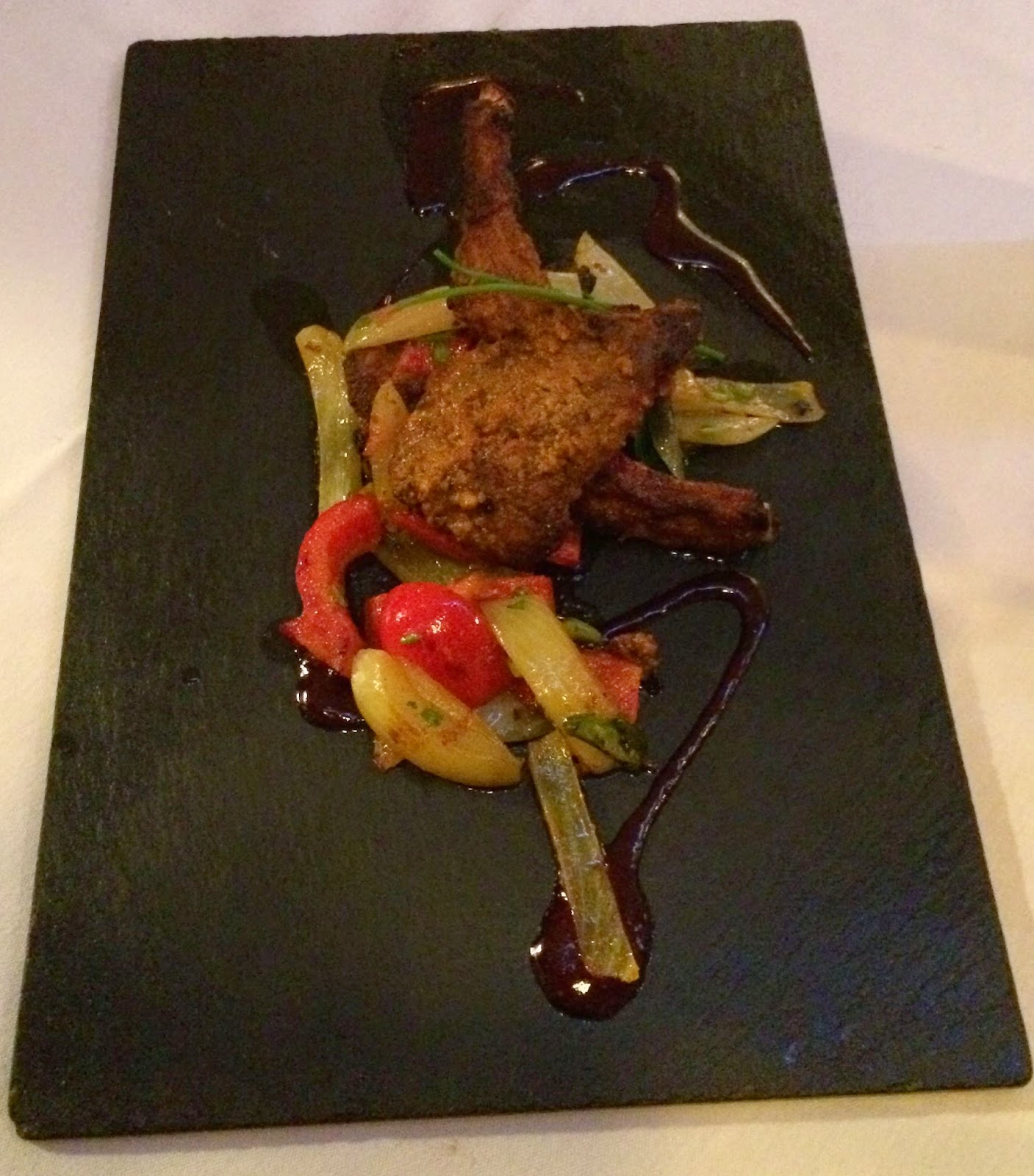 We started with Naram lamb chops, tender and subtly seasoned, though not as pink as I’d like. 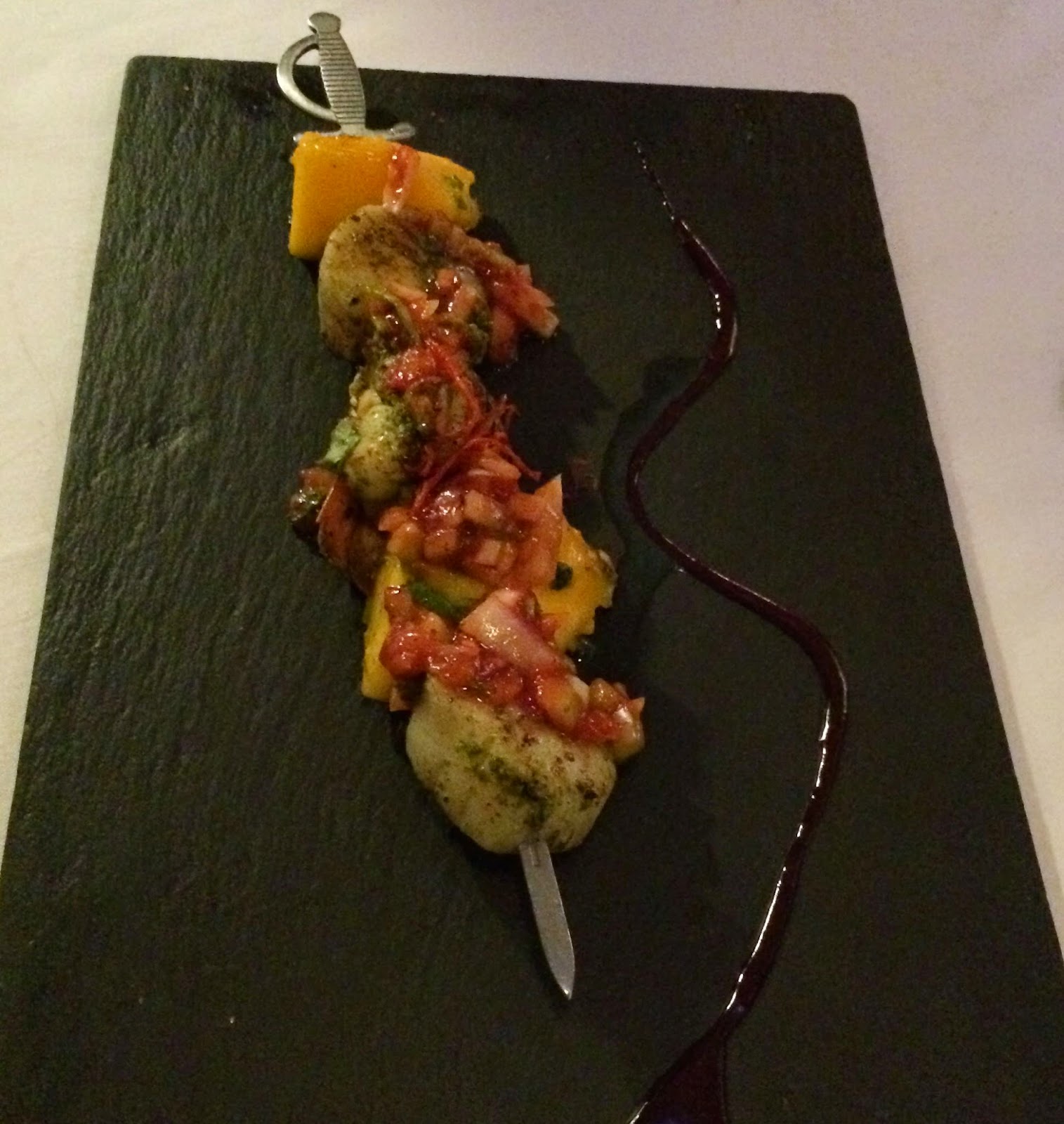 Samunder ki kazana were large, juicy prawns with sweet “black pearl” (which presumably means Atlantic) scallops, skewered on a little sword, and presented on slate. These were very acceptable. 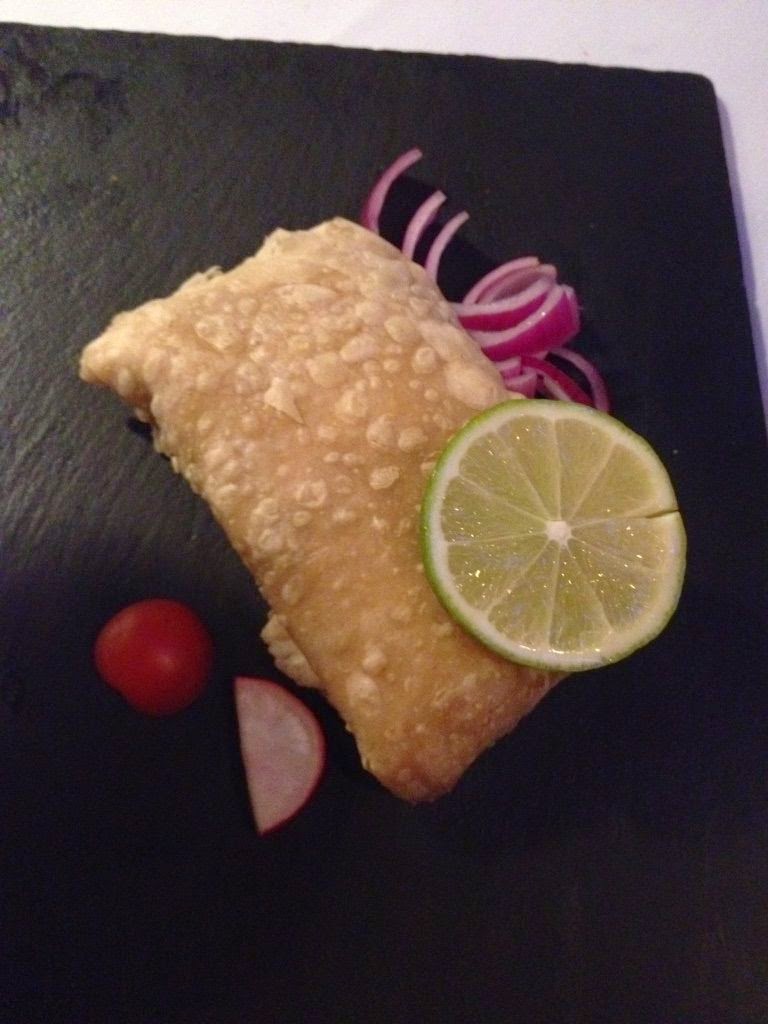 Less so was crab lasuni, which was a parcel of crab, garlic and ginger purée wrapped in what the menu called puree, but were in fact puri. Shame the parcel had been popped, for it would have been more dramatic for it to be served puffed up. Also, the purée inside the puri could have done with rather more seasoning. 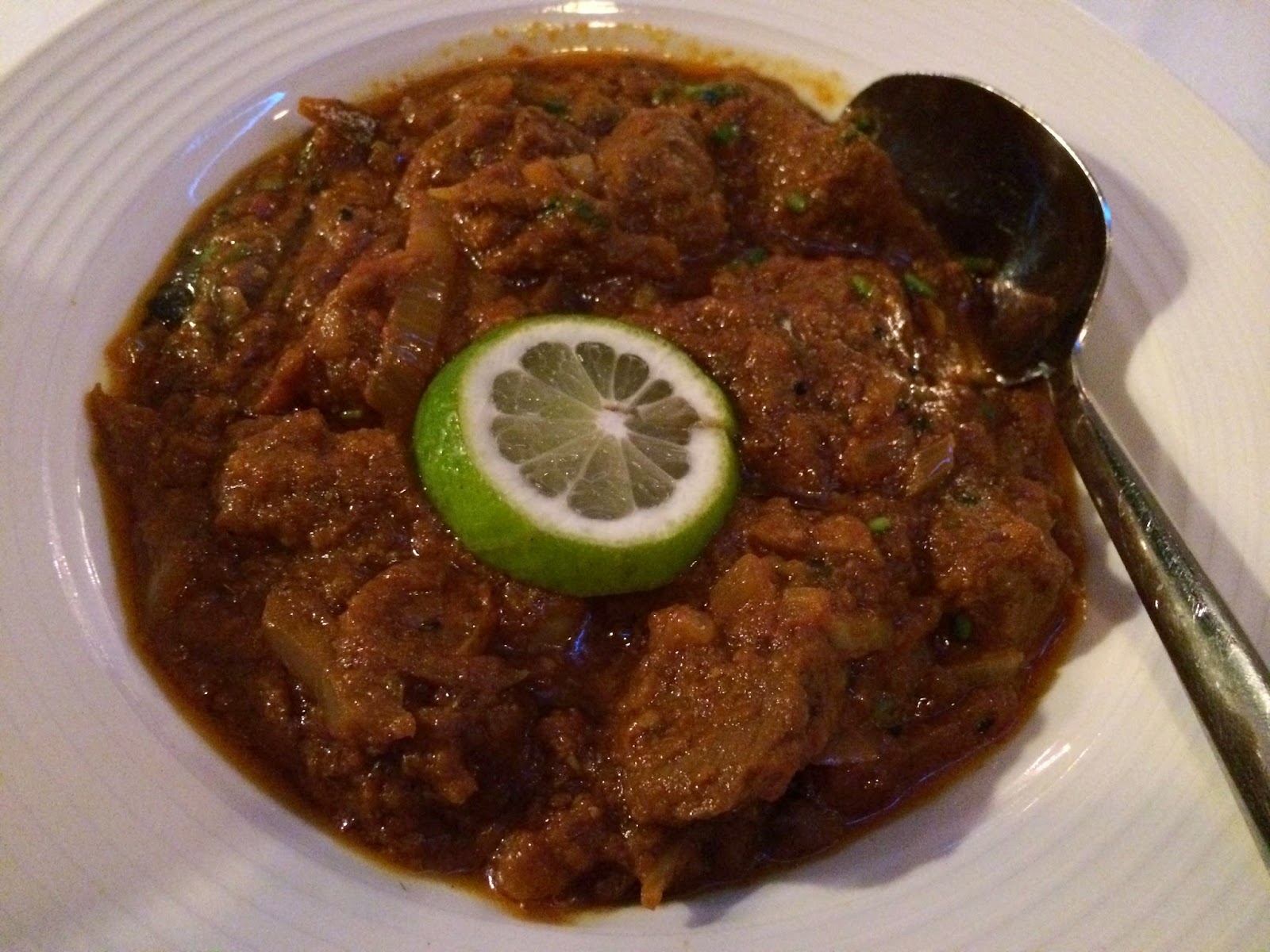 We had two corkers for mains: shatkora lamb was a lamb achari – that is, containing pickles – in this case preserved shatkora citrus fruit from Bangladesh. This was as intense and layered as anything I’d tried in London the previous month, as flavourful as Gymkhana’s kid goat with brains – I kid you not. Highly recommended. 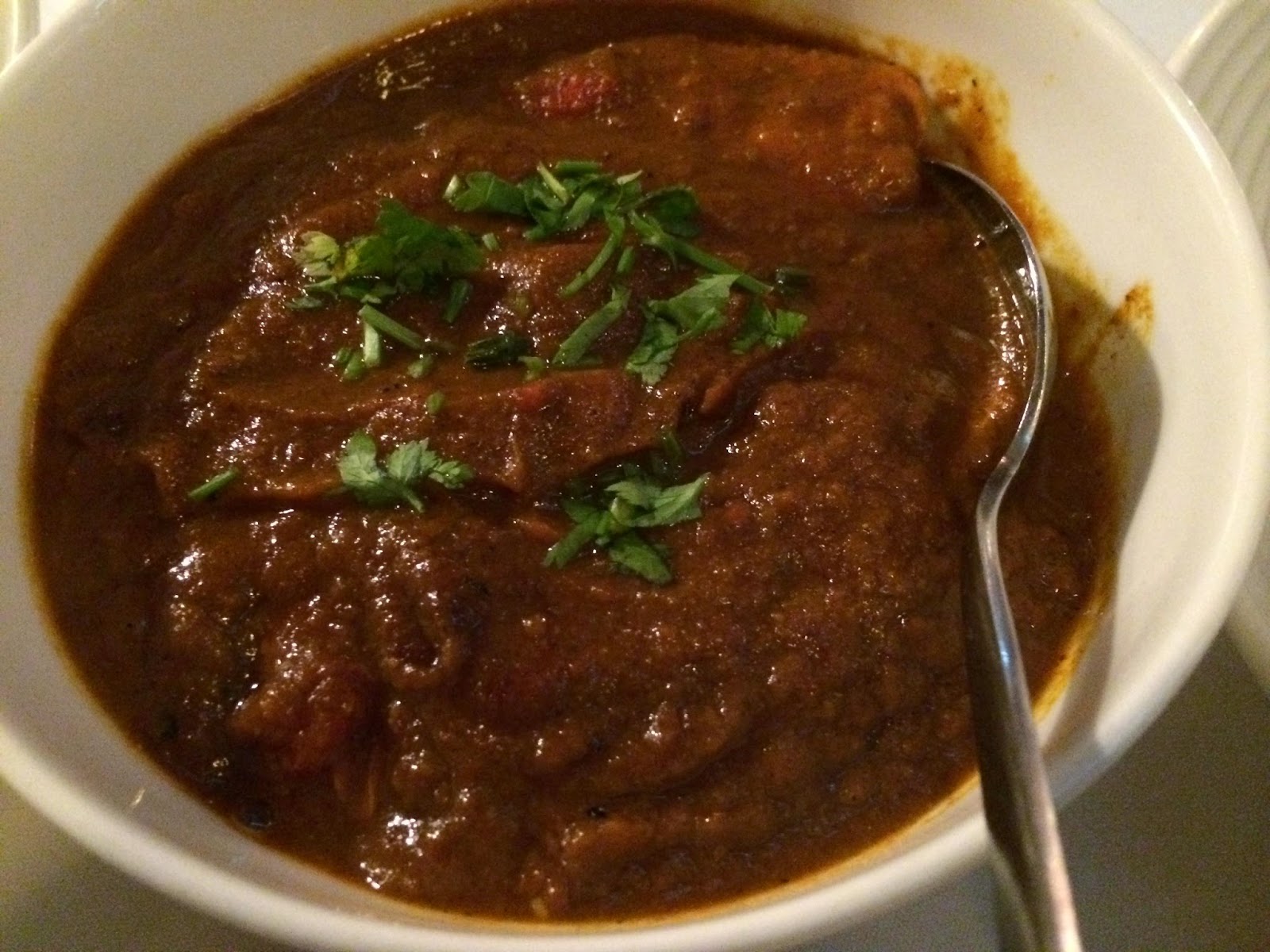 We also tried “a very Punjabi dish” of Dhaniawala chicken. If Punjabi cooking signifies freshly ground and roasted spices, this was absolutely spot on. 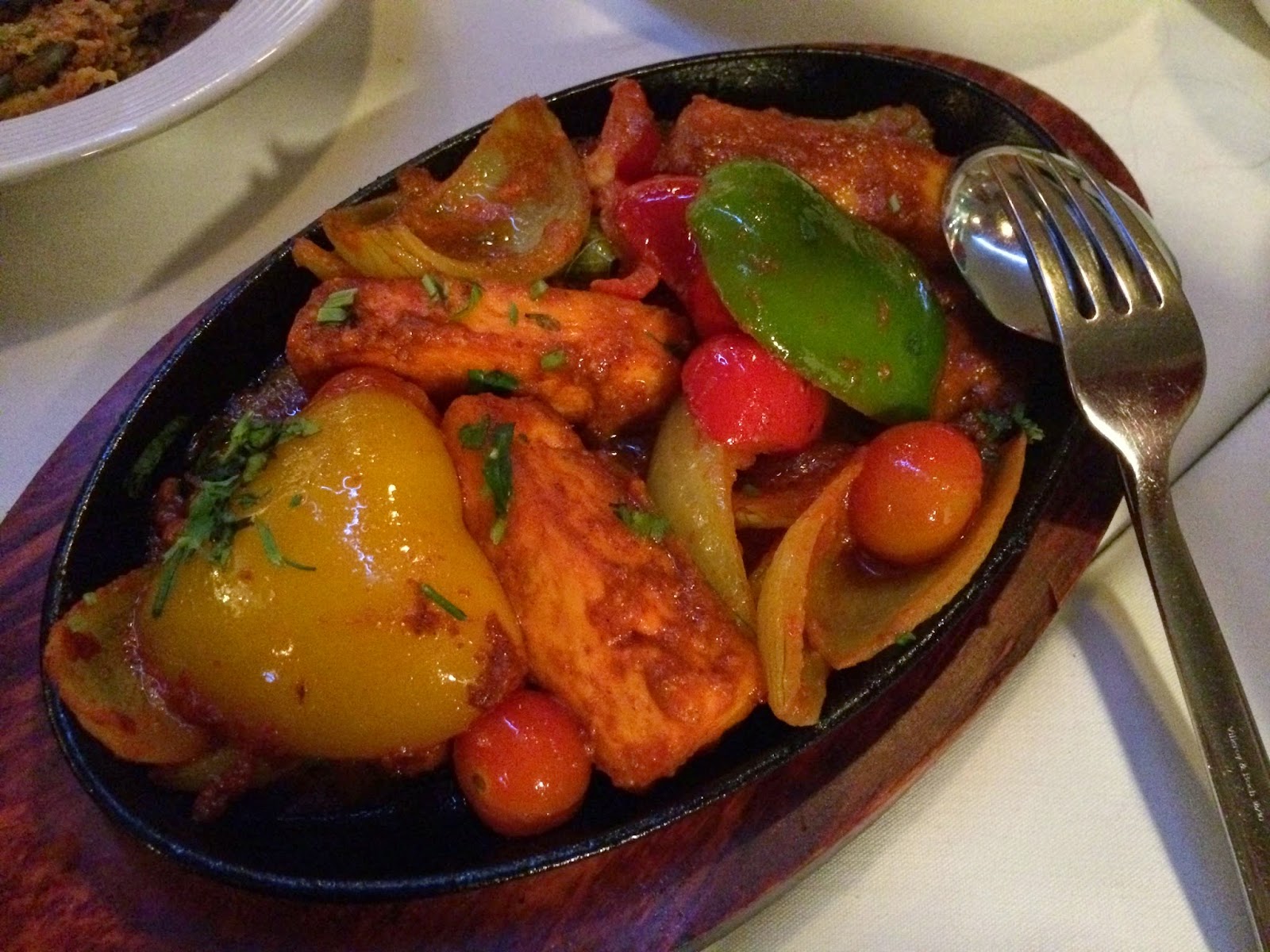 In order to experience life as a vegetarian for a few short moments, we also ordered a ‘panir shashlik’. A large portion of paneer cheese arrived, marinated sweetly, and cooked with onions, cherry tomatoes and peppers. 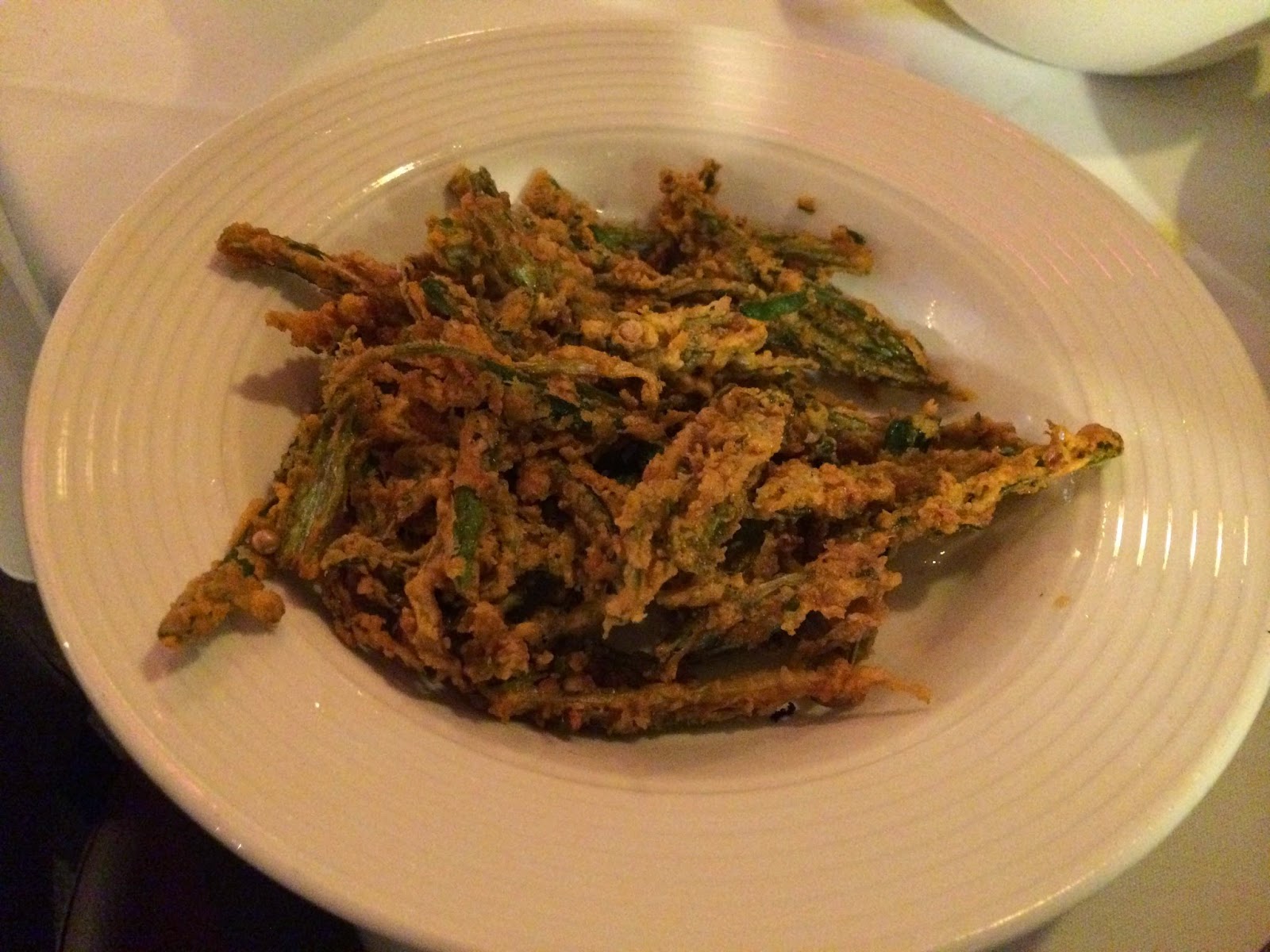 Mrs Diner, who occasionally pretends to be a veggie, really enjoyed this, together with some crispy okra and also a roasted aubergine, cooked in tamarind and sprinkled with sesame seeds. I found this just a touch too sweet. 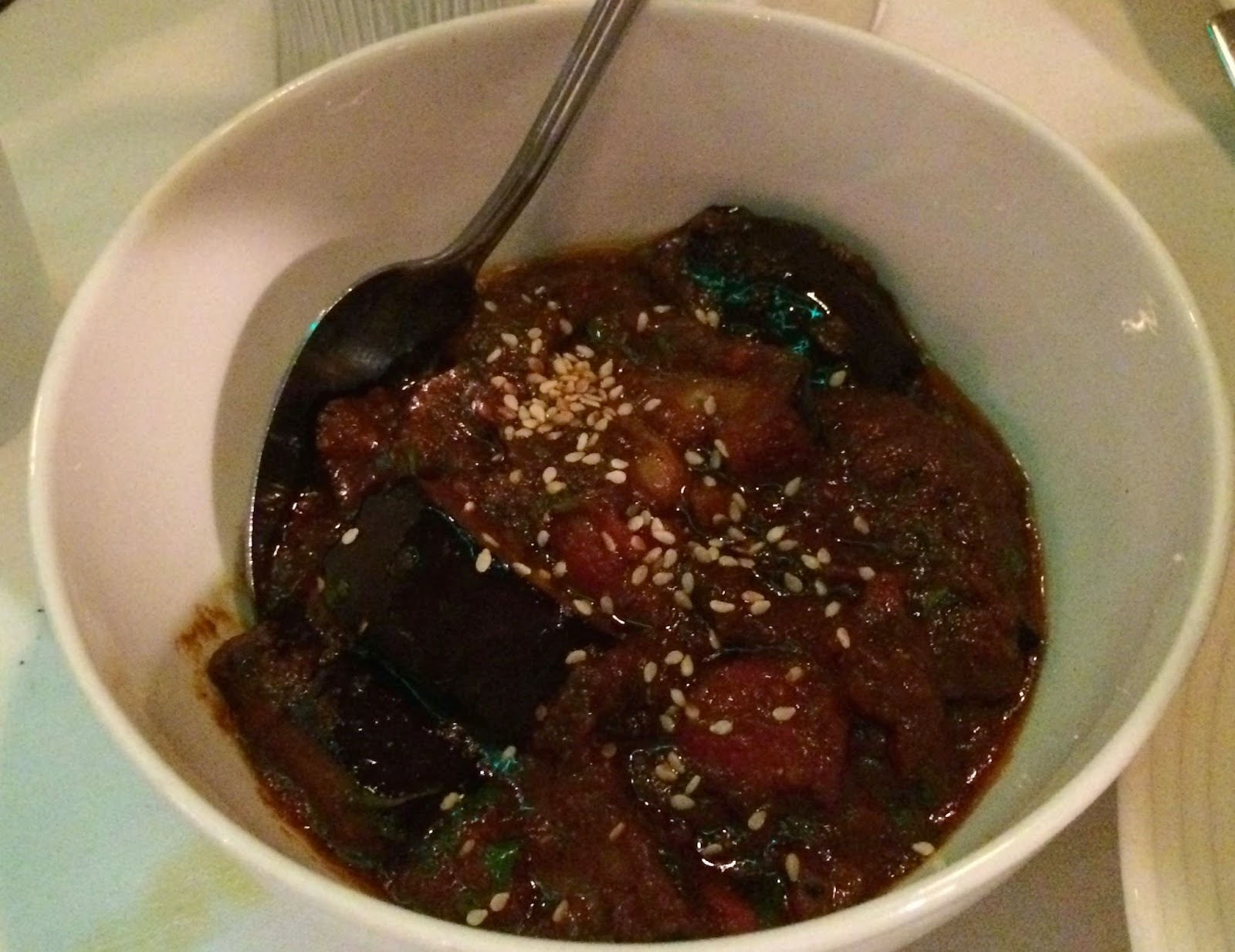 No one uses tamarind like Rasa on Newcastle’s Quayside – their black-eyed beans with yoghurt have spoiled me for life.

For dessert, we had samosas covered in spiced chocolate – they were regular-sized pastries, too large to pop in the mouth, and too solid to divide, leaving us with a severe how-to-eat dilemma. 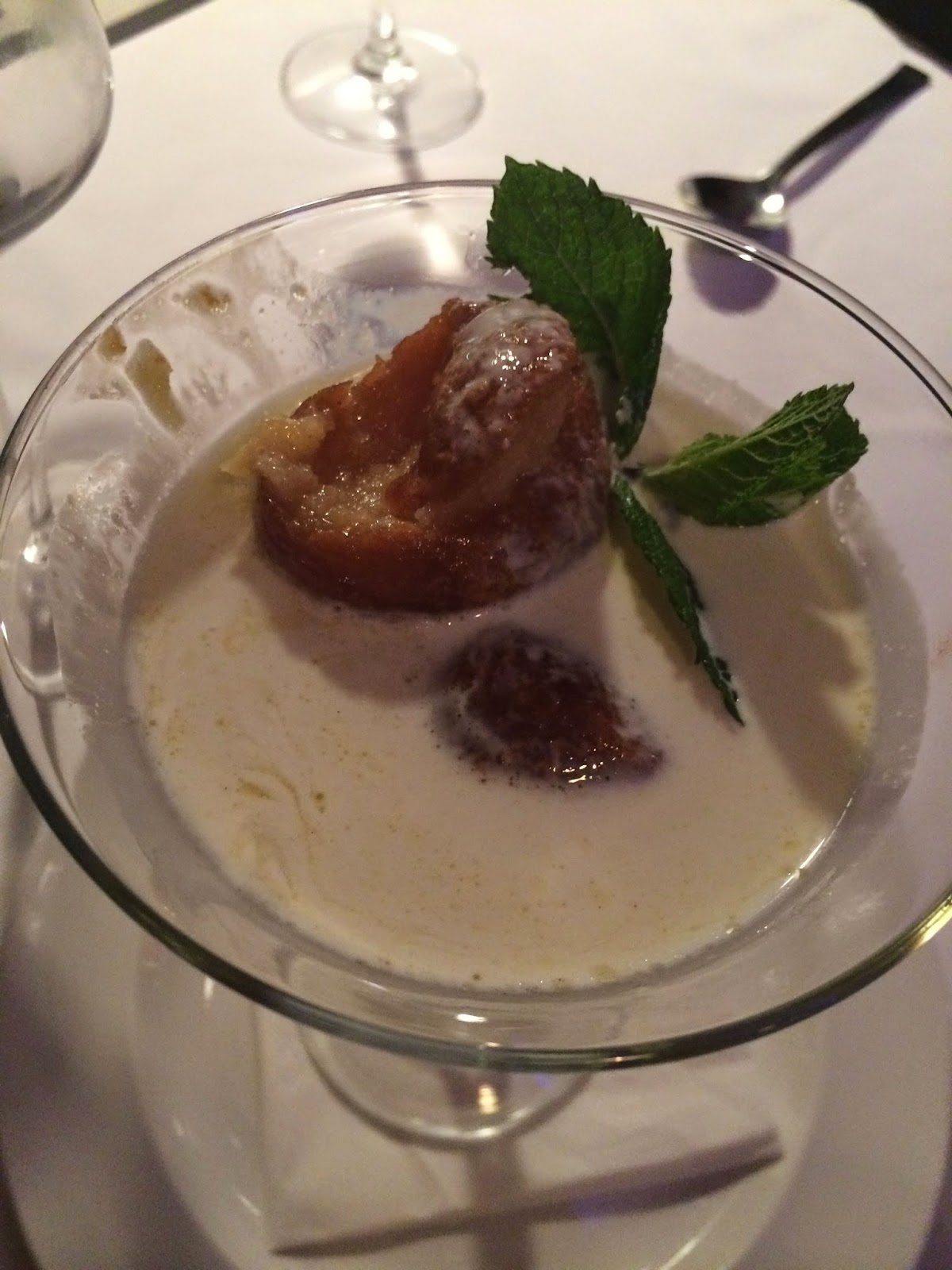 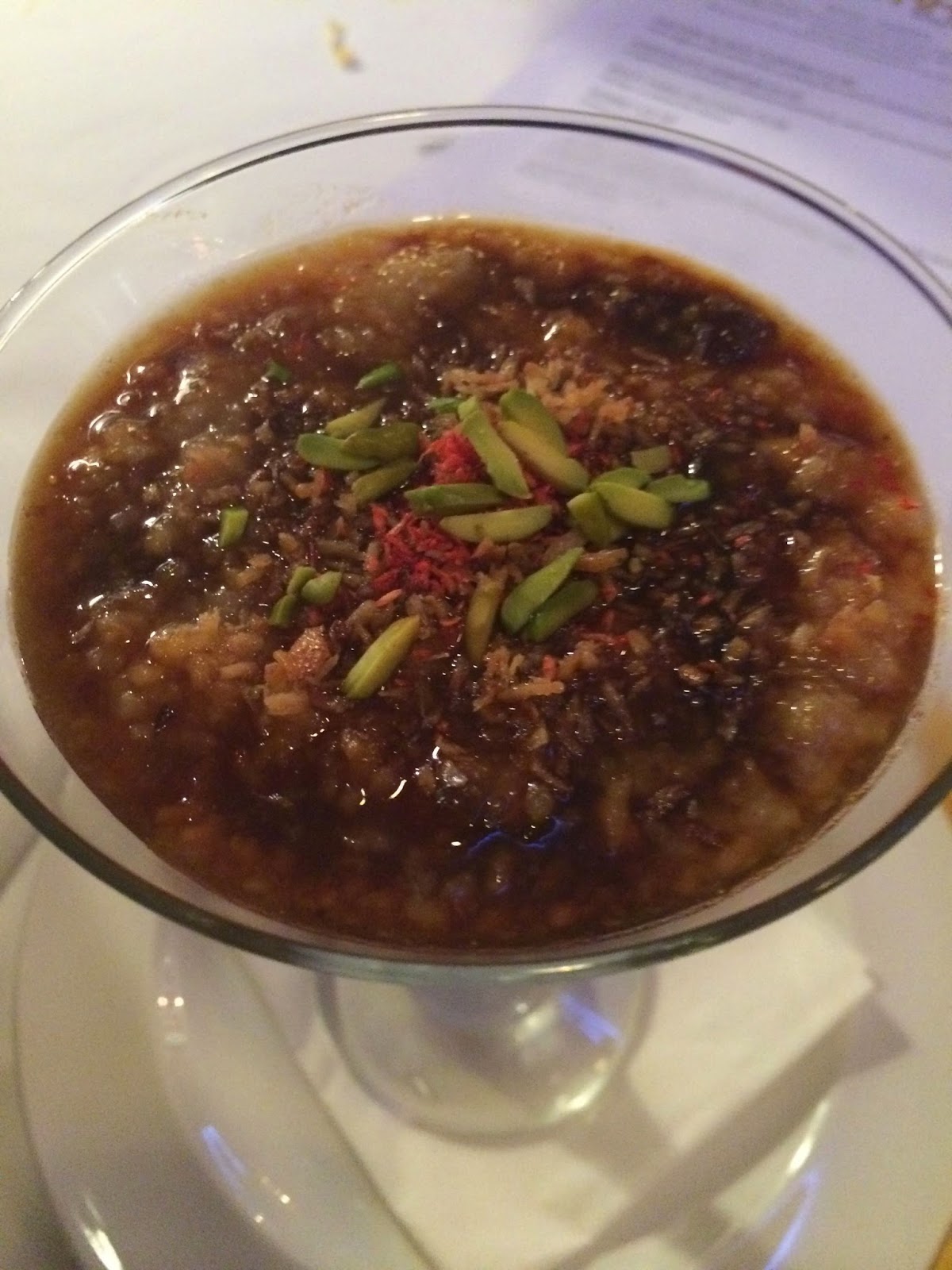 To which we added a bowl of jaggery. This is an outrageously sickly-sweet dish of – well, jiggery-pokery.

Mrs Diner’s friend, who knows about these things, tried to persuade me that this syrupy sweetness was good for me, because unlike sugar, which is a simple carbohydrate, jaggery, made from date and palm sugar, and looking just like a dark pool of raw molten molasses, is a complex carb that will slowly cleanse my respiratory tract and aid digestion after such a rich meal.

Well, you could have fooled me. It’s just about the sweetest thing I’ve ever eaten in my life – like mushed dates with added syrup and double sugar topping. Delicious.

But, despite the guilt of yet more curry-indulgence, I left Zyka with a smile on my face, because I’ve found another really good Indian – sorry, Bangladeshi – restaurant in the North East. The place is spotlessly clean, the welcome was warm and genuine.  In fact the service, from the chef’s brother – was impeccable, friendly, perfect. This is a seriously good curry house.