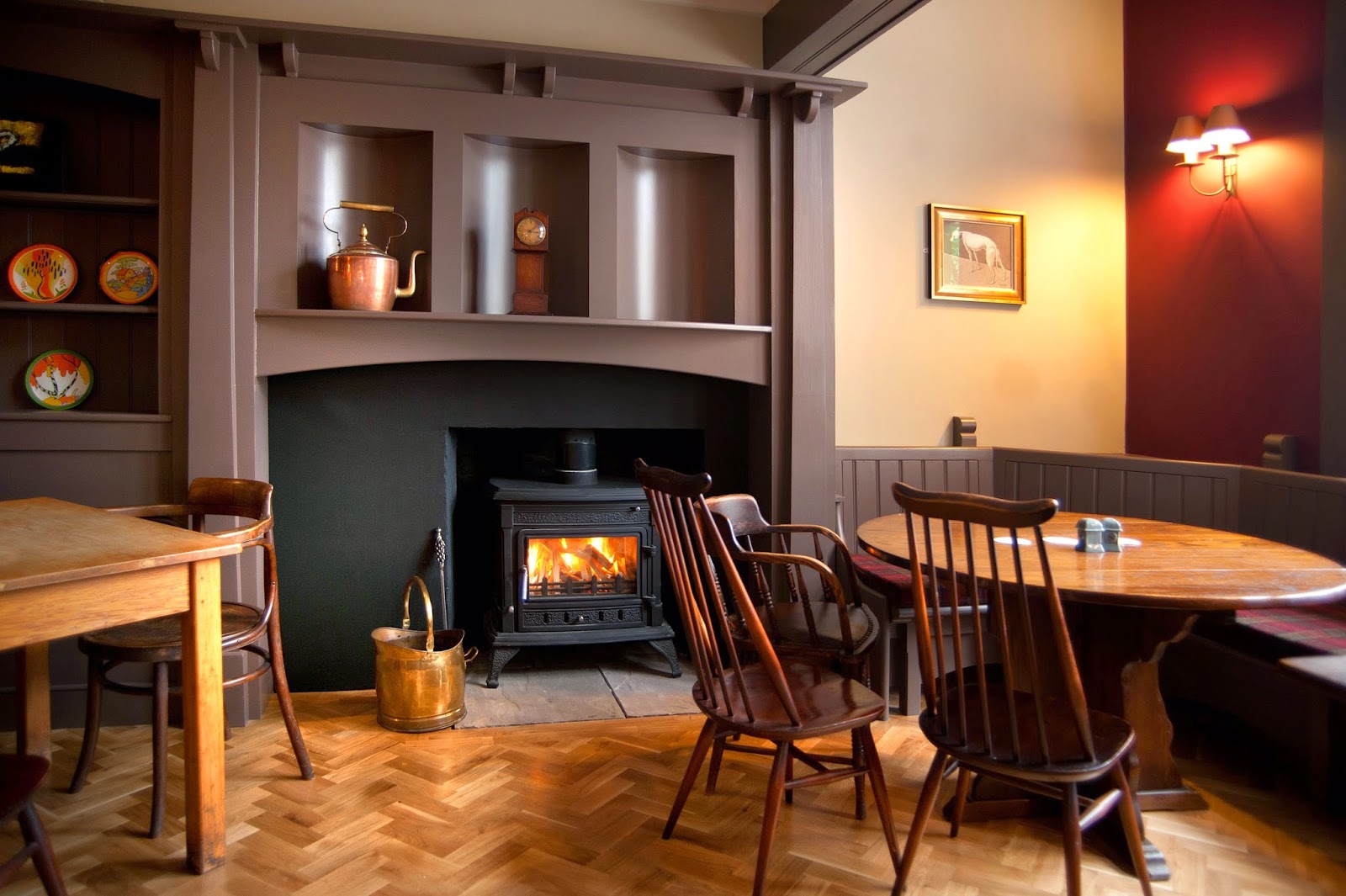 
STOP PRESS (September 2018): St Mary's Inn has reopened after closing in May 2017. I'm delighted to see it back. The new chef is Chris Cheek (ex Jesmond Dene House and Northcote Manor). He aims to offer "more creative dishes as well as much loved pub staples". I'll be reviewing shortly,

I guess you’d call this a work in progress.

'We’re creating a thriving community in the great British countryside,' runs the online blurb from Bellway, the developers of Stannington Park. 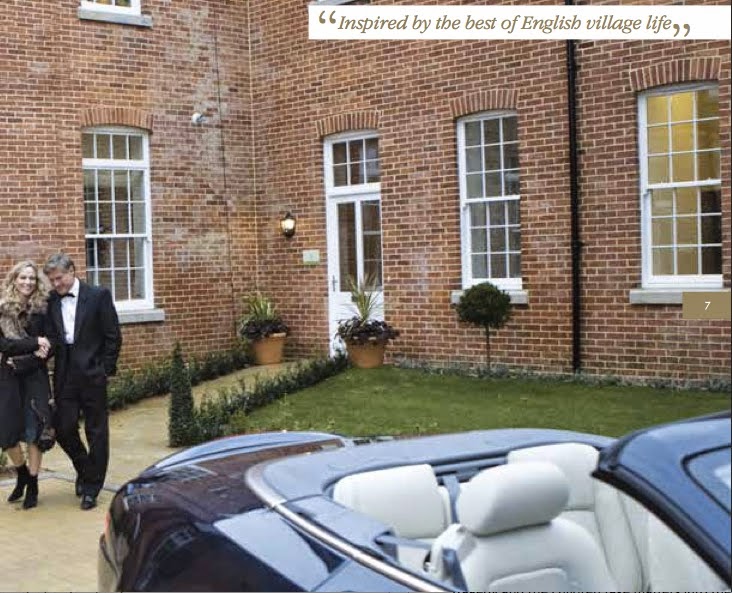 'Inspired by the best of English village life,' it goes on, over a shot of a couple dressed in black tie getting into an open topped sports car, presumably off to the opera. The lady is wearing her partner’s heavy coat to protect herself from the spray on the A1.

Elsewhere in the same brochure, the couple is dressed more appropriately for village life, complete with spaniel and green wellies, then wrapped in jumpers as they cycle, 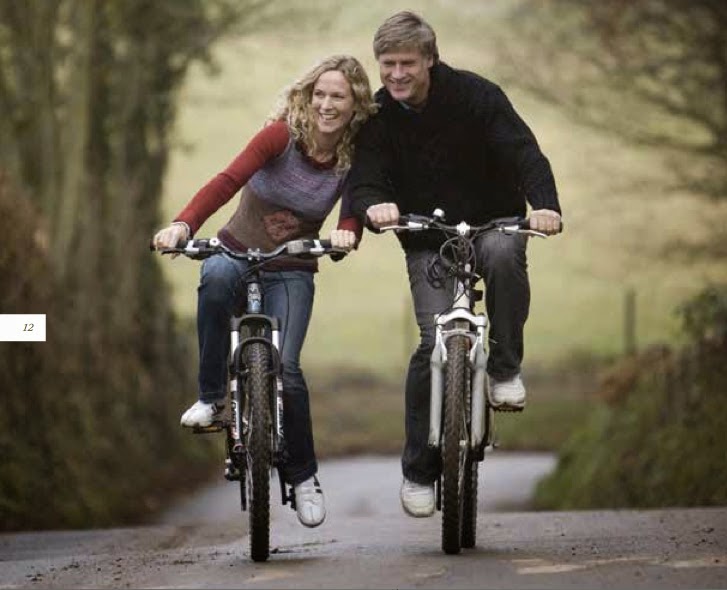 without a care in the world, or even cycle helmets, down a wintry lane.

Built on the sprawling site of the old St Mary’s Hospital, or Asylum as it used to be called, like every self-respecting country village, Stannington Park will have its own cricket pitch, community hall and, of course, village pub. 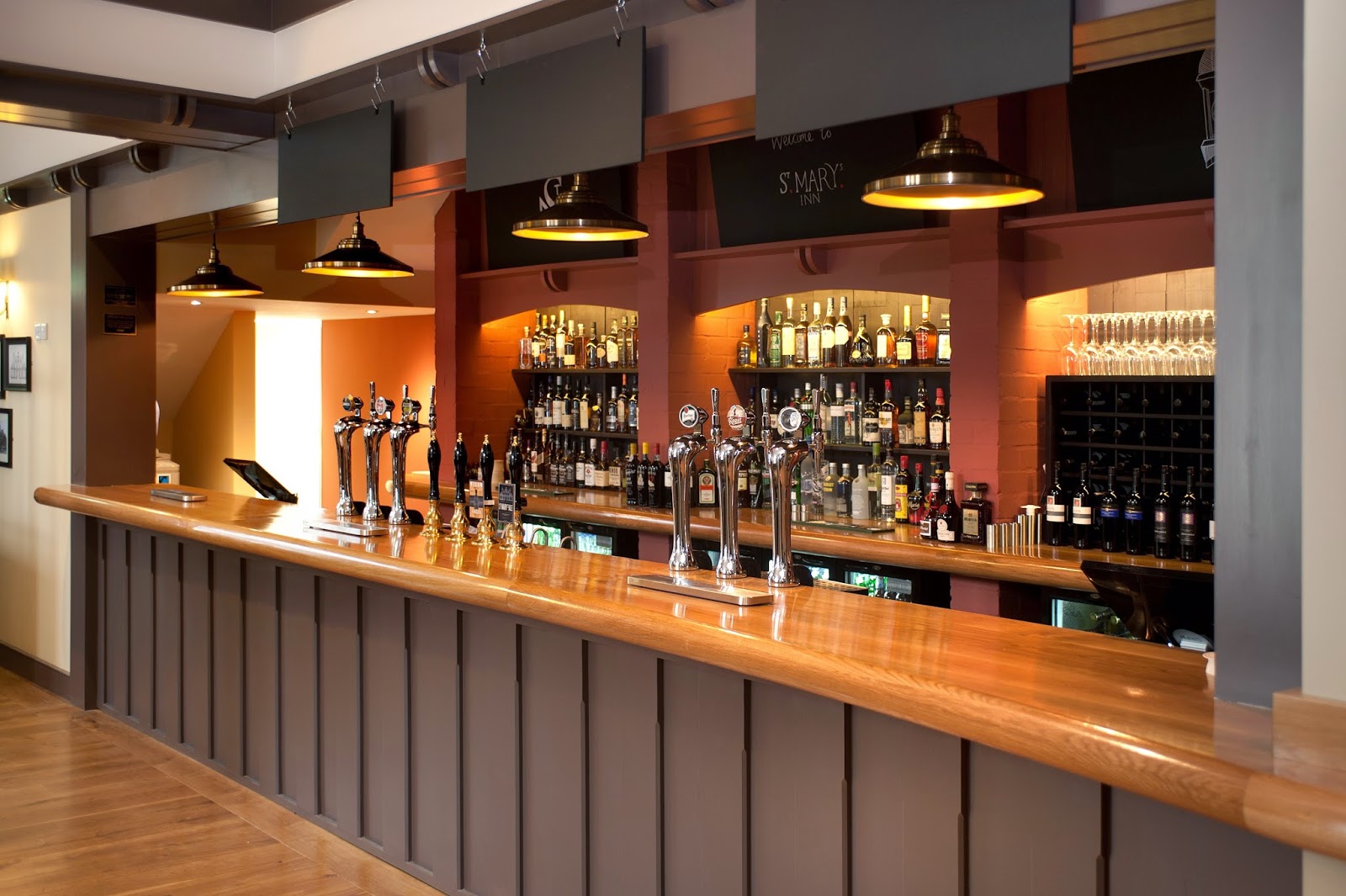 Not any old pub, this is a gastropub. And better than that, one owned and run by Newcastle’s best hotel, Jesmond Dene House.

Three weeks ago the old administration block of the hospital opened its doors as St Mary’s Inn.  With an opening as soft as the mud on the building site that still surrounds it, this pub with rooms so far has four smart bedrooms, but will soon have eleven. 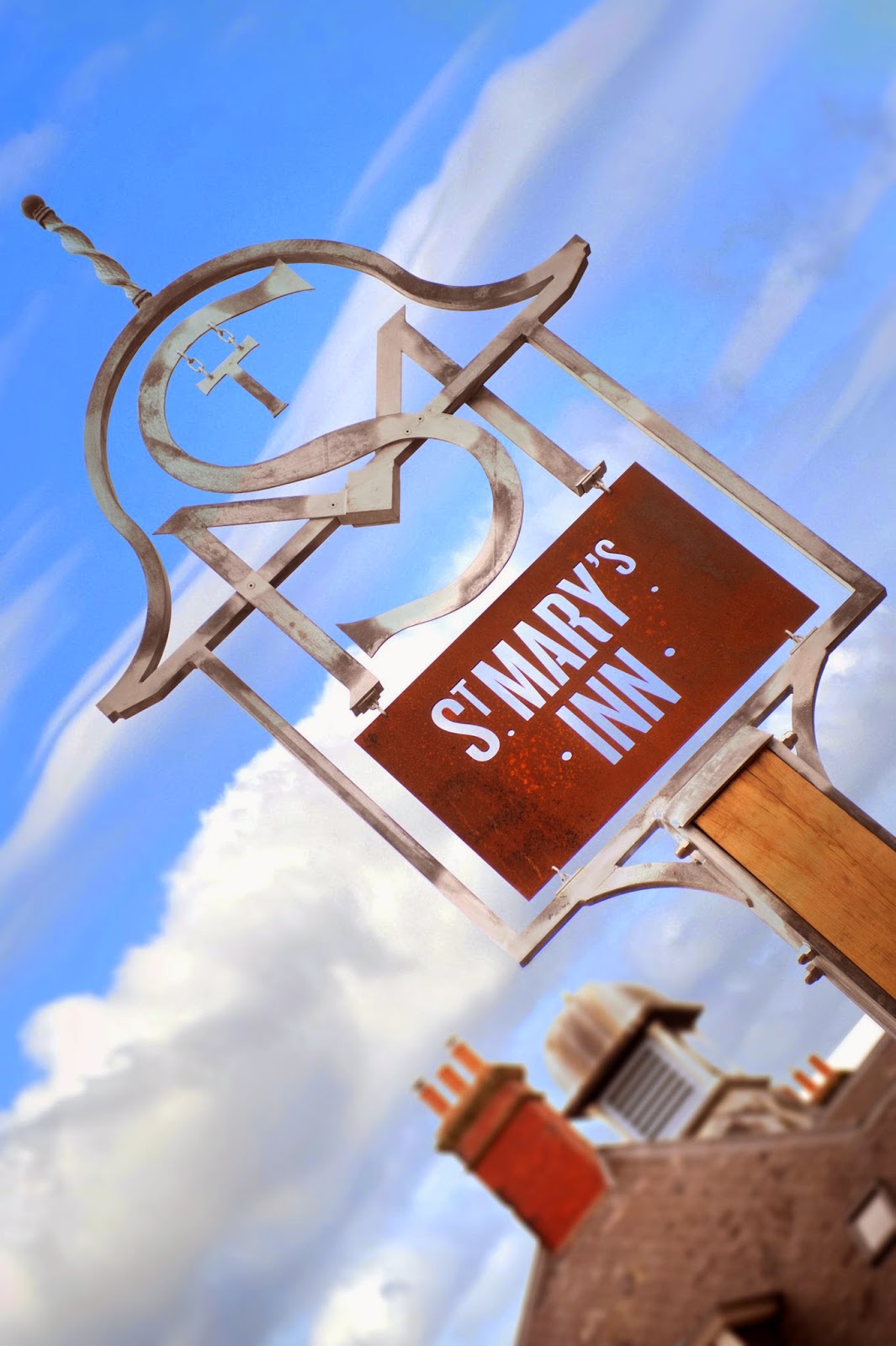 St Mary’s Inn is an oasis in the middle of the development, its trendy iron sign defiantly invisible until you actually get up close. Inside, it’s all wood-burning stoves and pastel Farrow and Ball, more English Heritage than English inn. Like a new Barbour jacket, this place needs wearing in.

Happily the clean-cut edge was taken off by a group of friendly drinkers in the large bar, one of whom had an even more friendly terrier. As the dog jumped up at me for a stroke, his owner apologised for the smell: “He’s been on the beach and loves rolling in dead fish.”

I told him not to worry. Any decent village pub should embrace mud, old sheep, fox poo and the like. There’s nothing like a faint whiff of dead fish to tone down brand new paintwork. I was genuinely impressed that this place is being used as a proper local pub, rather than just some being some new upmarket eatery for Morpeth, or for the residents of the new executive homes with their open topped sports cars and spaniels.

Nevertheless, it's true that the focus of this pub is the gastro.  They have, after all, hired a very good chef from London, Shaun Hurrell, who actually began his career at Jesmond Dene House.  So away from the bar, where we sat trying the beers (including a pleasant, specially-commissioned ale from Wylam Brewery), there are a number of small dining rooms, each with their own stove, wooden floors and tables.

We sampled the snacks first, an Olde English assortment, from malted rye sourdough with cultured butter (as distinct from butter that rolls in dead fish, presumably), devilled eggs, house pickles, and pork scratching with quince. You can that tell that Chef Hurrell has come from the modern English ‘snout to tail’ school of cooking. His background includes Fergus Henderson’s St John, and Farr’s School of Dancing, an eccentric pub in Dalston.

Just this week Shaun became a father (Harrison, Harrison. 7lb 11oz, mother and baby doing well), so now he has more than his new restaurant to give him sleepless nights.

We ordered pork fat and chilli pistachios and salt cod fritters. The pistachios were smoky, spicy and greasy from a little jar – we soon needed napkins and more beer, and the slightly over-frittered fritters were so salty I decided to attack the wine list. Which is, I guess, the point of serving bar snacks.

“I don’t drink wine myself,” said our waitress, when asked if the Riesling was dry or sweet, then she trotted off to find out (“off-dry” was the verdict, so instead I ordered a fresh white Rioja).

The staff are friendly and keen, but they need to know their menus. At the moment, or at least last Saturday lunchtime, front of house was lacking a front, a wise hand to help customers through a large menu and a comprehensive wine list with 19 house wines by the glass.

Combining an informal setting with modern British cooking needs really expert and knowledgeable service.  It's one of the most important aspects of a gastropub. But, as I said, it’s all work in progress and I'm sure Jesmond Dene’s management will sort this out long before the builders have finished the rest of the site. 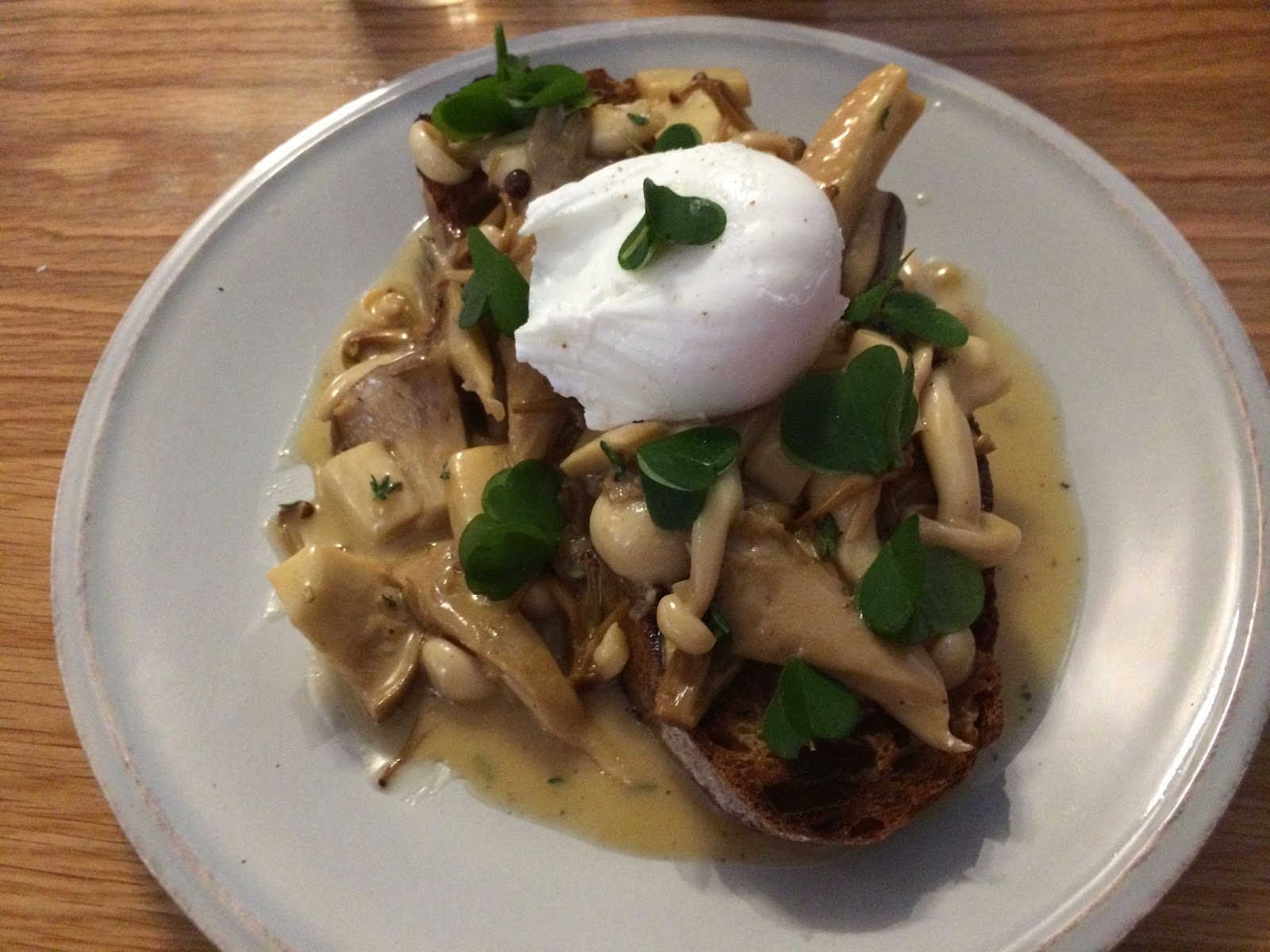 As to the food, there were nice surprises. Starters included foraged mushrooms (‘foraged from where?’ brought another trip to the kitchen – ‘Scotland’ was the answer), grilled mussels and local game terrine. There were sandwiches too, and main courses ranged from charcoal grills to chicken pie and sausage and mash. A giant cod and chips floated past. We chose mussels, mushrooms, grilled pork collar, and braised lamb shoulder.

We chose well. Mushrooms, if not foraged from Morpeth’s own woods, were fresh, earthy, served with excellent sourdough and buttery sauce. This was topped with a soft egg with an orange yolk that combined with the lemon acidity in the sauce to create a kind of delicious homemade hollandaise. 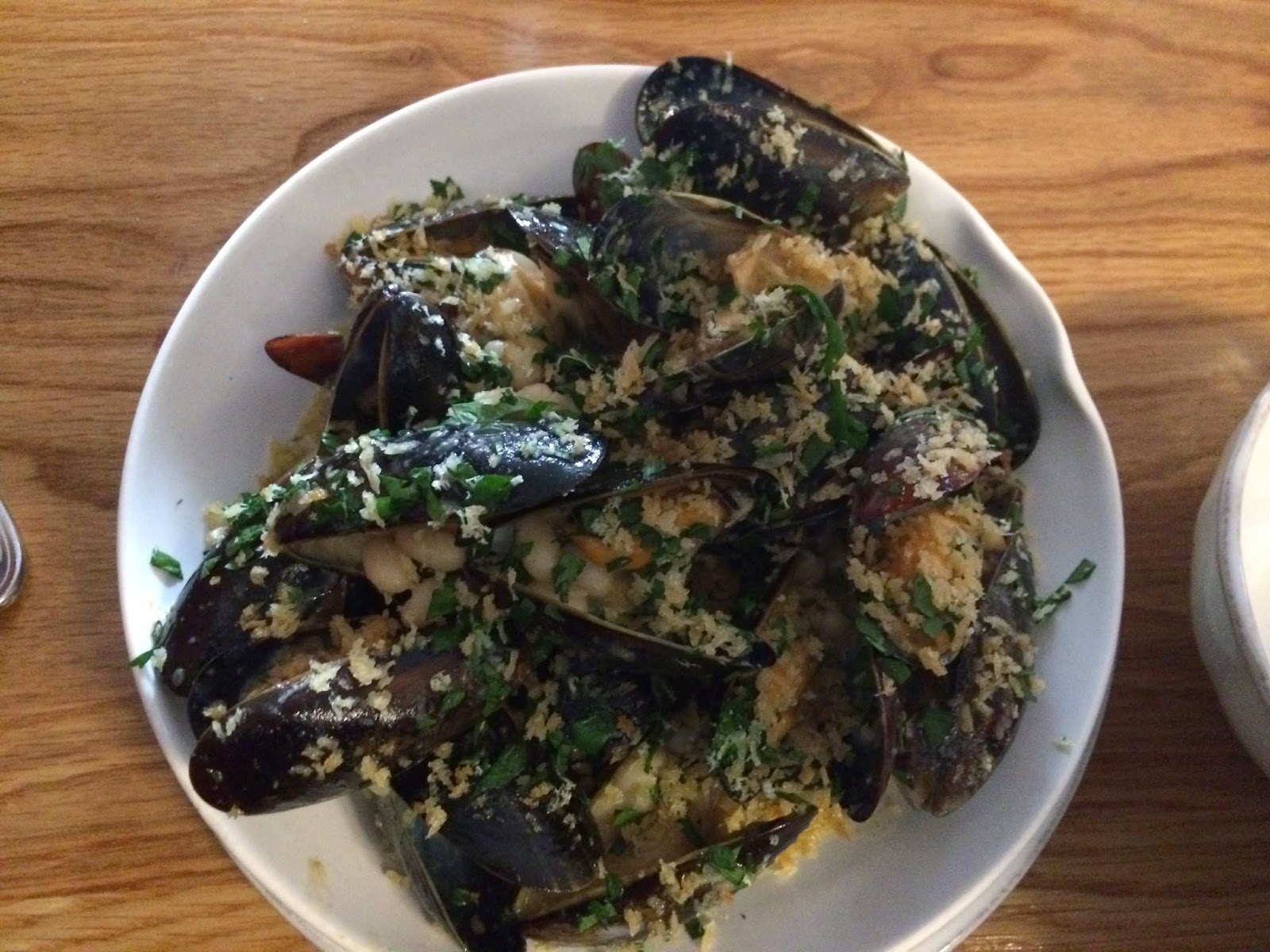 A large bowl of mussels came with white beans, and a sprinkling of breadcrumbs for texture. 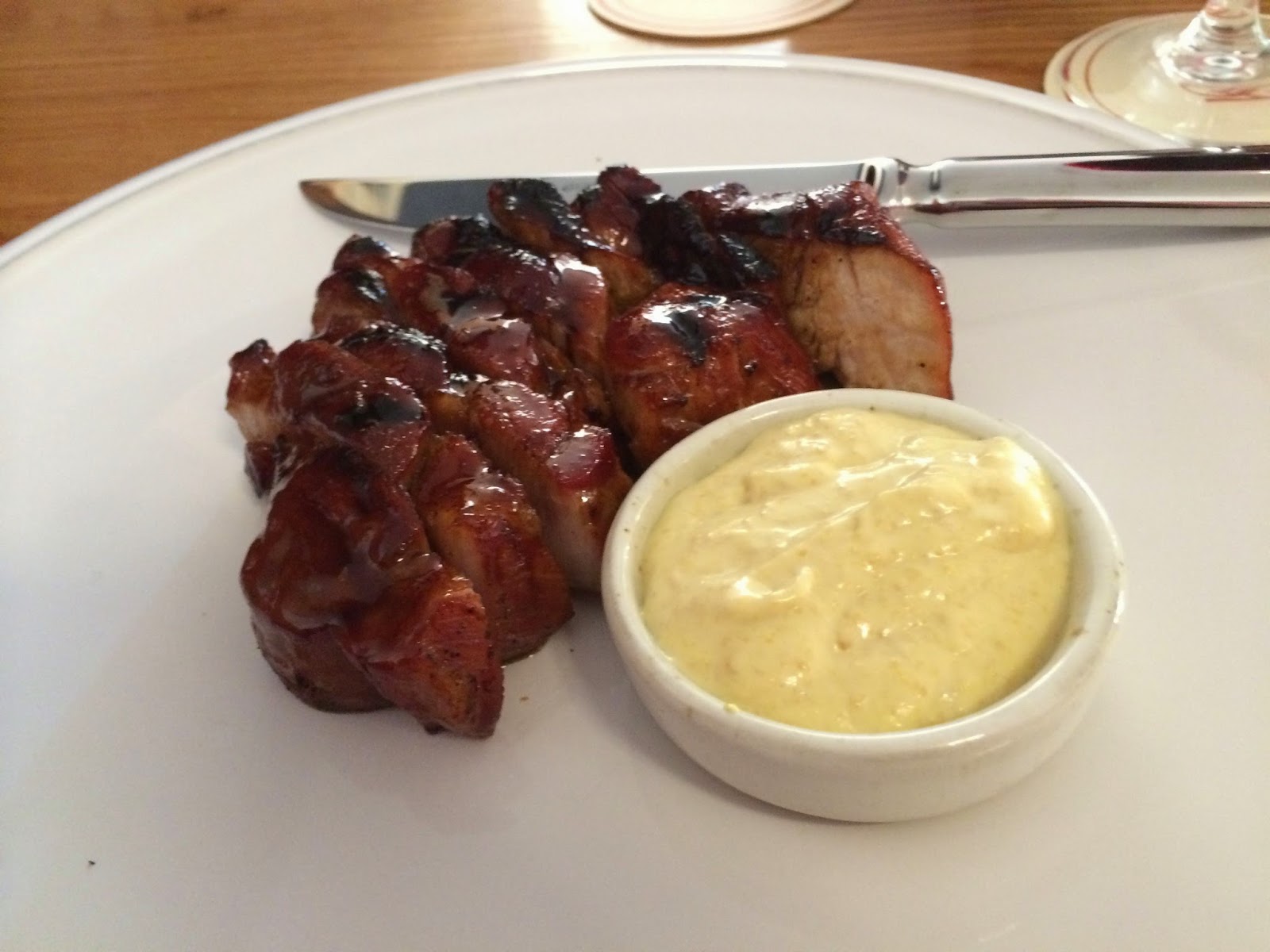 Nuggets of smoky pork collar glazed with maple syrup were flavourful and firm but still moist, with a beer-laced mustard, while an enormous plate of tender lamb was served on butter beans and liberally sprinkled with green sauce that needed more seasoning. 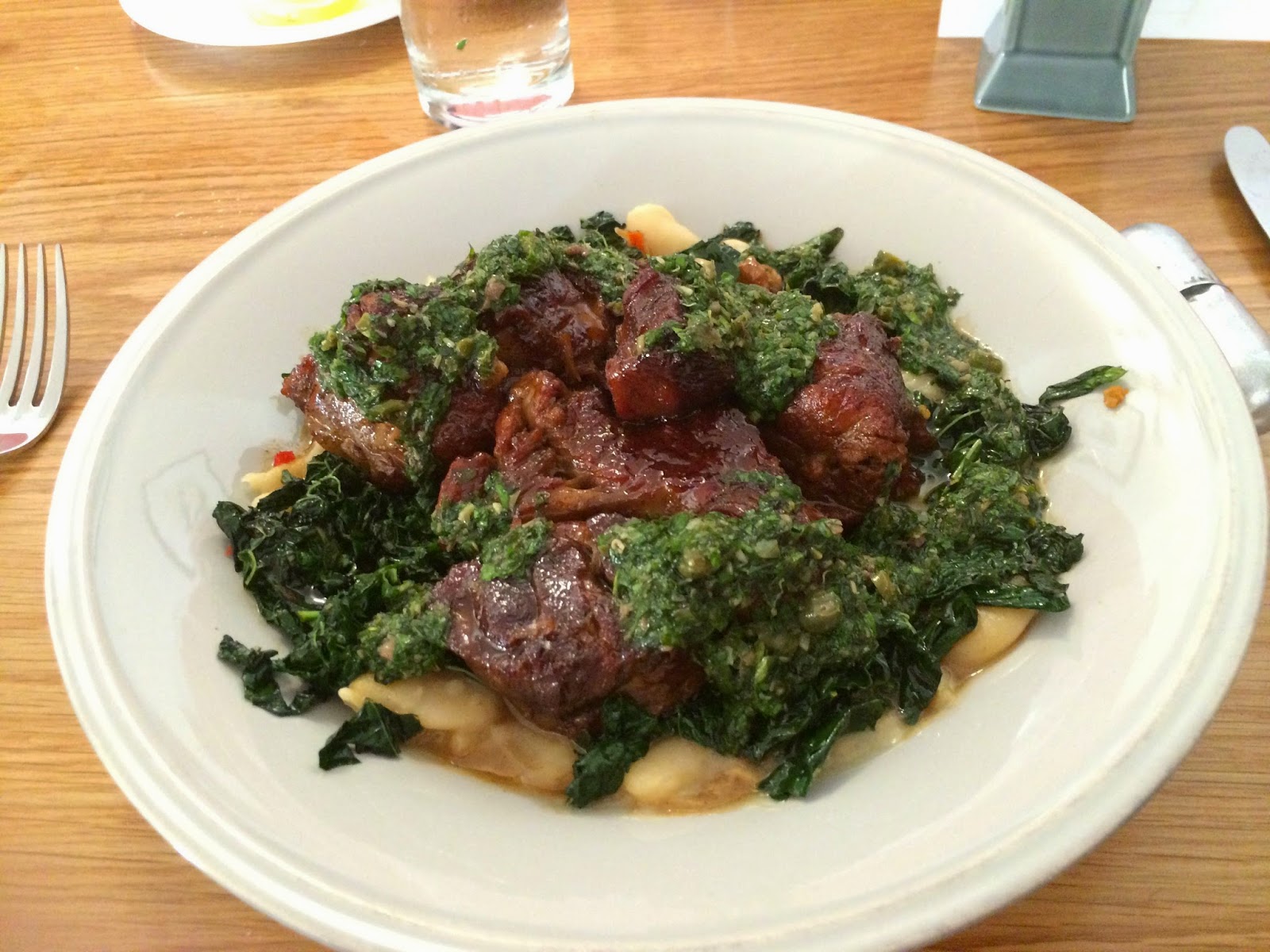 We ordered bone marrow and parsley chips on the side: these were absurdly indulgent. We also ordered cold red cabbage and coriander coleslaw, which was a mistake: it was exactly what it said on the menu, but far too ordinary compared to the rest of the feast. 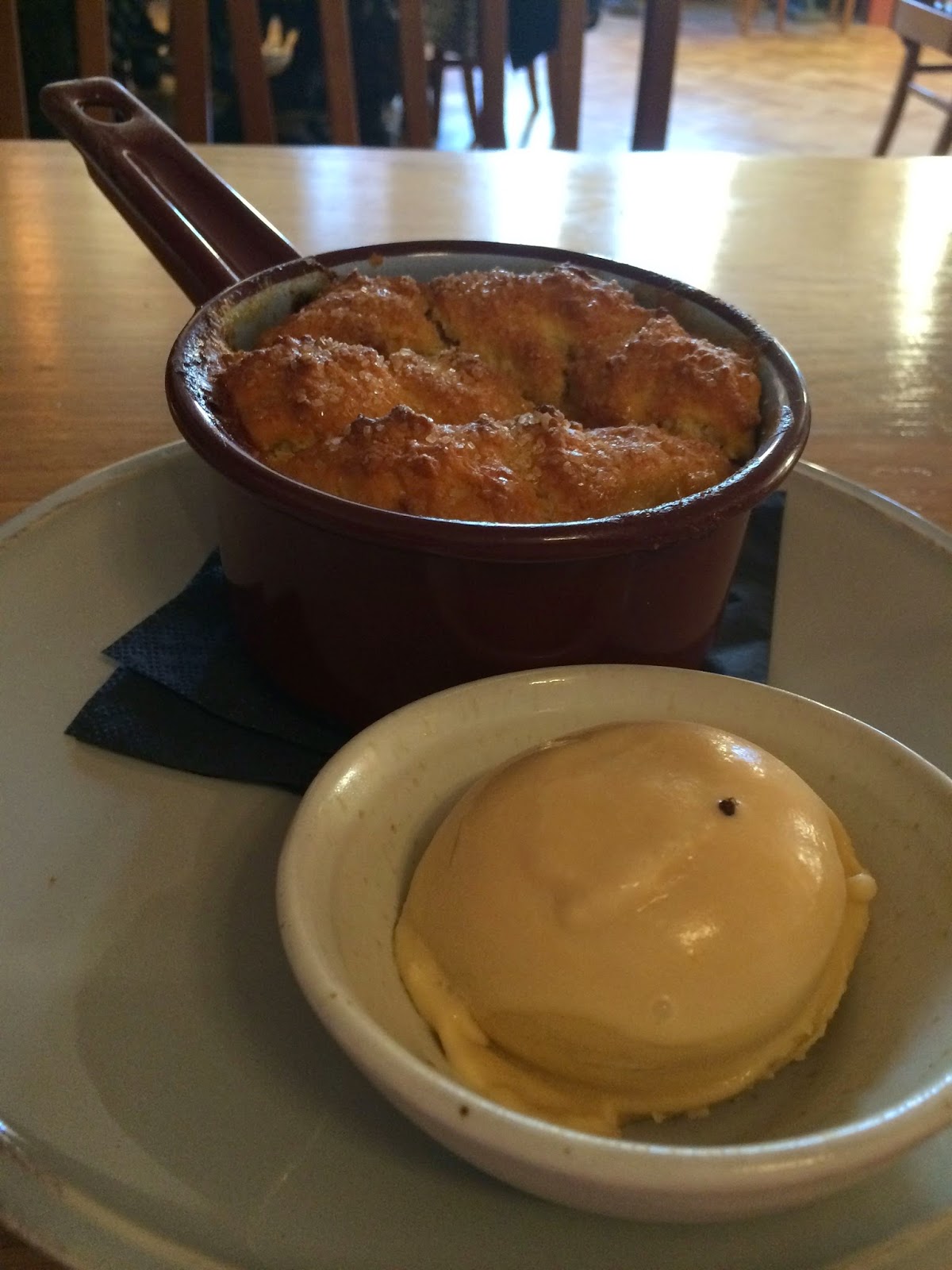 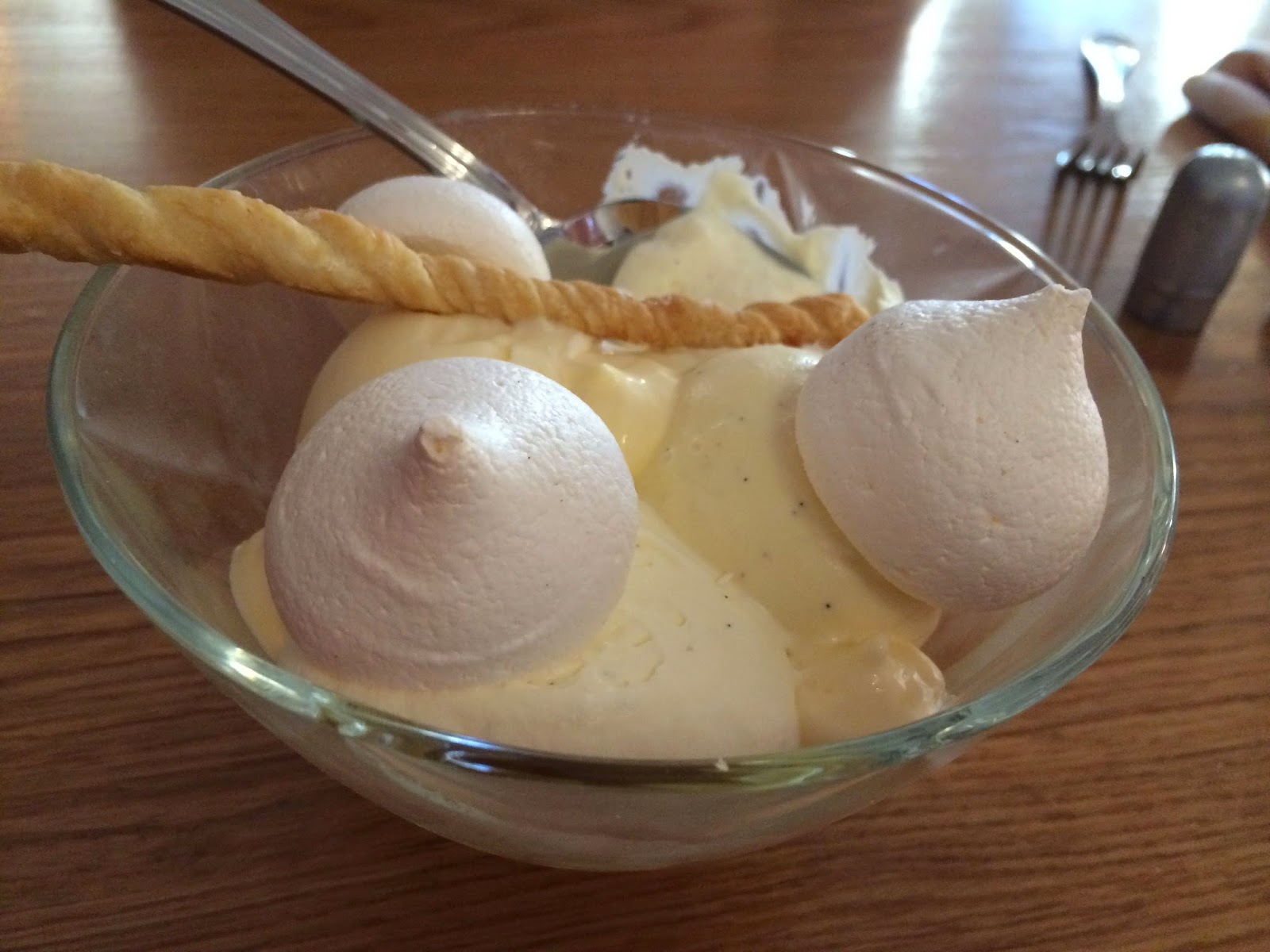 Desserts were unnecessary, but in the interests of completeness I sampled a disappointing assembly of lemon meringue sponge and vanilla ice cream, and an apple cobbler, served with milk toffee ice cream, which was just the sort of comfort food you’d want after a long day out cycling the lanes, or walking the spaniel, or freezing yourself to death in an open topped sports car.