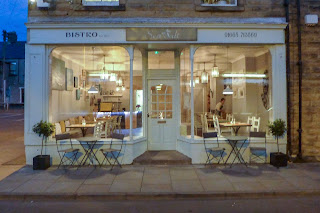 
Amble is only a couple of miles down the Coquet from Warkworth, but they could be on different planets.

Like two unequal sisters, a pretty one that gets all the dates, and a plain one that does all the work, Warkworth has always eclipsed its neighbour on the visitor front, with its castle, riverside walks and more high-end holiday homes than you can shake a jar of WI jam at. By contrast, Amble has always seemed like a place where people actually live and work.

However, recently Amble has blossomed. On a recent stroll along the harbour (I’ve already reviewed The Old Boat House there, with its excellent fresh fish), we happened upon “Amble Harbour Village”, a new development with lots of small businesses trading out of small wooden “pods”. Several even described themselves as “artisan”: this was not the Amble I knew as a child.

They’re building a seafood centre, and I’m guessing there will soon be an overdose of gift shops as the visitors flood in. I hope Warkworth doesn’t get too jealous.

Amid such a regenerative flurry, we were pleased to find another good eatery. Amble is almost becoming a food scene. Almost.

We tried to walk in to Sea Salt (now renamed Sea&Soil), but all thirty or so covers were spoken for. Taking that as a sign that good things were happening, we booked a table and returned a few days later. We were met with a warm welcome and a room of subtle taste. 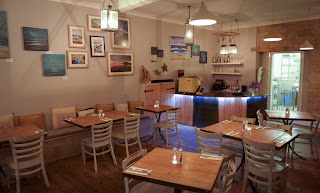 The windows, stretching almost from roof to floor throw natural light onto untreated wooden floors, exposed stonework and Farrow & Ball-esque shades of grey. Local art on a theme of marine enlivened one wall, while slates chalked with daily specials enticed us from another. It’s a bright, charming seaside café. 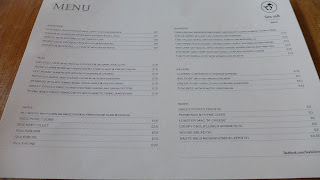 The menu, full of sensible but interesting dishes, betrays a chef who likes to eat as well as cook. And clearly likes his meat. It would have been obvious to open another seafood restaurant but, although there were fishy dishes on the menu, especially amongst the specials, it was the range of meat that really caught my eye. 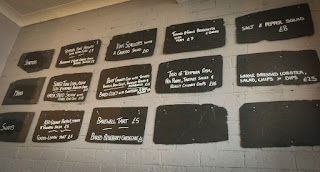 Pork and beef from the grill, burgers and chicken salads are joined by lamb rump, calves liver and roast quail.

I parked my previous plan to eat only fish from the harbour, ordered a bottle of oaky 2010 Lan Rioja and went for the flesh. 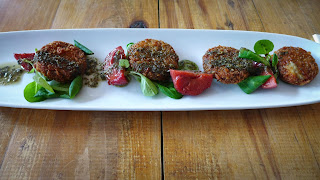 My choice of roast duck croquettes with plum and oregano earned me four breaded and deep-fried pucks of duck, accompanied by segments of sweet confit plum and a sort of loose herby salsa verde. These were nice enough, but could have done with a little more seasoning. Which is ironic, considering the name of the restaurant. 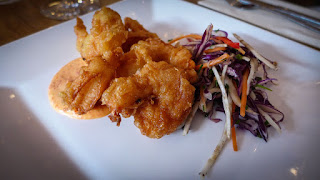 From the daily specials, in what is fast becoming a theme of recent meals, Mrs Diner’s tempura king prawns didn’t fit their description. The batter was more chip shop than bento box and the accompanying “Asian slaw” lacked any thwack of spice or verve. To me tempura means ethereally light, crisp batter, without a trace of grease. These were deep fried prawns. 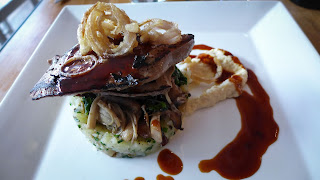 Things shifted up more than a couple of notches with the arrival of my calves’ liver. It sat precariously atop a stack of buttery crushed potatoes, sautéed mixed mushrooms and spring greens, crowned by crisp shallot rings. Back at ground level a celeriac purée and a long-reduced sauce rounded out a busy but delicious dish. Mrs Diner swears I exclaimed “stonkingly good”, though in fact I prefer my liver still blushing, and this was a touch over, but the seasoning and sear made me forgive it.

Mrs Diner’s sirloin also benefitted from a serious salty char, and was the very picture of medium-rare, although it was let down by another disappointing slaw and some flaccid sweet potato fries.

Special mention must go to a side dish of lobster mac and cheese. If the lobster was slightly lost, that’s only because of the artery-bothering brilliance of the cheese sauce. This was a riotously good rendition of the comfort-food classic, generating another “stonkingly good.” 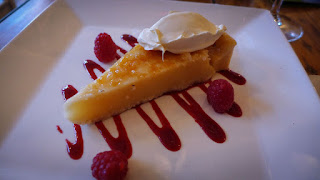 Puddings were both direct hits. The filling of my lemon tart was a dead-heat between sweet and sour, even if the pastry was a bit underdone.

Service was knowledgeable and generous in equal measure. Front of house is Julie Lunn, while her partner Jonathan Bird, previously of Slaley Hall, helms the stoves. Perhaps not surprisingly, there is a strong sense of pride and ownership that has filtered through to all the staff. This place used to be a greasy spoon café, but now count on spending around £40 per head to eat and drink well in the evening. Earlier in the day they serve brunch, as well as coffee and cakes.

Although I suspect a more focused and pared-back menu would really let Jonathan’s skills shine and likely earn a fourth star, we staggered out into the gathering dark, full of the satisfaction from having been well fed, watered and looked after by people who care.

“Amble was ready for somewhere like this,” Julie told us.

She’s right. And Warkworth could probably do with somewhere like this too.