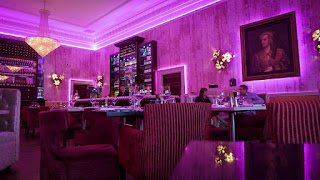 I love that bit in Masterchef when the most nervous chef-victim gets flung into service at a top London gastro-temple for a day.

“You’ll be cooking the quail, with 17 components including three sauces and the quail brain mousse – it’s our signature dish, and we have five Hollywood celebrities who’ve flown in specially, so make sure it’s perfect,” says the head chef with an evil smile, raising a carefully rehearsed eyebrow for the closeup which the editor needs for the horror film music sequence.

The contestant gulps, then with trembling hands clutching sharp knife, picks up the first tiny bird.

“It’s OK, we have plasters,” says the smiling head chef, as the blood begins to flow from the first cut finger, “but you have just 30 minutes before the customers arrive.”

Sadly, this isn’t quite how it works in real top restaurants. No one person is responsible for an entire dish; the brigade de cuisine system has chefs working on stations - veg, meat, sauce, garnish and so on – and all their efforts are brought together at the pass. Teamwork is critical; but teamwork, and reality, don’t make for riveting television. 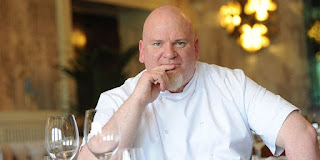 Simon Bolsover, installed as executive chef of Seaham Hall’s two restaurants last year, has made a point of talking up his team in the catering press, and quite right too. It’s clear that they’re working well, for Bolsover was absent from the stoves on the night of our secret visit.

When I last tested Seaham Hall, celebrity chef Martin Blunos’s name was above the door, but he hadn’t been seen at the pass for a long time, and it showed. For a 5-star hotel trying to regain its classy reputation, it seemed strange to be offering what amounted to a bistro in a bar. Now the operation has been handed to a serious chef that’s actually in residence, and it appears to be working. 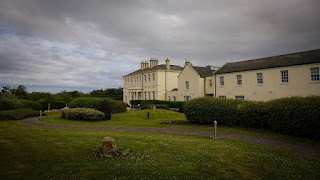 Mrs Diner was very relaxed about her repeat visit – not surprisingly after a couple of hours in Seaham’s Serenity Spa – and the hotel grounds look more kempt than before. Seaham Hall has had an expensive makeover, and it shows.

Bolsover arrived with a ready-made reputation. Having plied his trade abroad, then in serious kitchens like Raymond Blanc’s Le Manoir, he spent six years as head chef at Great Fosters, a splendid country house close to the M25. Hopefully he brings to a close the rather confused period in Seaham’s culinary history after Kenny Atkinson left the Michelin-starred White Room in 2009.

Mrs Diner and I were certainly confused by the lighting. It was quite dark, and what light there was, was pink. What I had remembered as an opulent, warm room now has the feel of a bordello designed by Peter Stringfellow.

“They need a change of lightbulb,” I mumbled crossly. “It’s hard enough taking surreptitious photos in a dark restaurant, but getting the pink out will be a nightmare.”

I then grumbled about the music, a kind of Balearic chill-out.

And very good it was too. 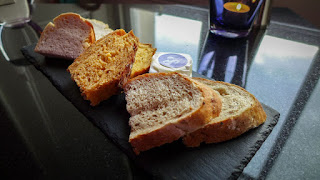 There’s a market menu, at £30 for three courses, and an à la carte, roughly £40-45 for the same. Some dishes sound complex, others simpler, while there is a separate section for steaks.

It’s a sensible mix for a good hotel, and we sampled both menus. 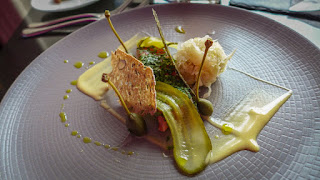 The salmon had been expertly brined to a firm texture, with high notes of juniper working well against the fish, whose richness was cut through with a fair battery of pickled and fermented bits and bobs – caperberries, sauerkraut and a dill pickle came together to make a very good starter. 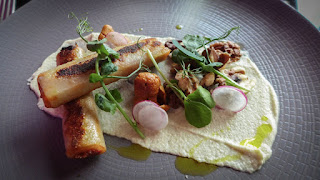 It rather outclassed the duck leg cannelloni we chose from the more expensive list. There wasn’t enough fowl to sing through the cannelloni, which was a bit doughy. ‘Candied’ walnuts were in fact raw, while the promised endive decided not to show up at all. In the credit column, the cauliflower purée was velveteen, and some pickled chanterelles were delicious.

We didn’t have to wait long for redemption. From a good selection of fish I had chosen lemon sole with a beurre noisette, matched by a glass of soft-fruity Viognier. 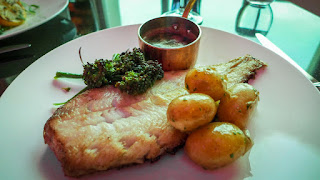 On my previous visit 18 months ago I had questioned the provenance of the fish, but there was no such issue now. This was a stunning sole, treated with suitable respect, simply grilled on the bone and served with broccoli and Jersey royals. It fairly hummed of briny depths and classy cooking. If Chef Bolsover had been on the pass, he might have sent the butter sauce back to its stove to develop the nuttiness a touch more, but otherwise, this was a simple triumph. 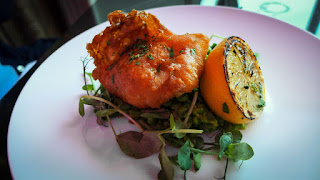 Mrs Diner’s more mundane fish and chips were enjoyable, if not as gilt-edged. Milky-white piece of pollack sat within an orb of crisp batter, on a mound of fresh crushed peas. Chips were the proper shade of golden. 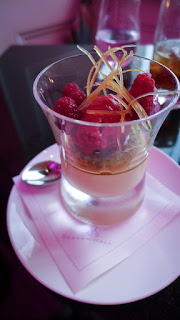 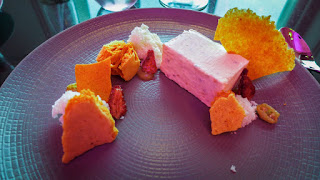 A riff on in-season gooseberries matched a well-made parfait with semi-dried fruits and a gooseberry gel, some feather-light sponge and nostalgia-inducing honeycomb.

Stirring stuff: whoever was on the pastry section that night can take a bow. Service was smart and informed too.

While not quite up to the level of the very best our region now has to offer (how standards have risen!), it’s good to know that this handsome lump of a building once more contains a restaurant that cooks excellent ingredients with a confident hand. Even on the Head Chef’s day off.