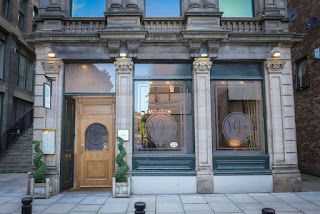 
A few years ago I attended one of Maunika Gowardhan’s excellent Indian cookery classes at Blackfriars (Maunika’s first book, Indian Kitchen has, incidentally, has just been published; it’s a stunner).

As Maunika explained to the attendees that most British curry house standards are in fact an anglicized hybrid of Bangladeshi cooking, which would be largely unrecognisable in India, Bangladesh and Pakistan, I noticed a split in the room. Half the guests nodded intently, their hard-won knowledge validated by a real expert; the others looked taken aback, the Indian rug swept from under their feet.  Surely their beloved tikka masalas and jalfrezis, previously thought the real deal, couldn't be just counterfeit inventions?

Of course, in these days of authenticity and provenance, it creates a problem for the best restaurants. Do you stock your menu with the standards that so many of your potential customers expect to see, and which most of them are likely to order? Or do you offer genuine cooking from India, Pakistan and Bangladesh’s varied regions and traditions, hoping to attract a clientele that cares, and educate some who don’t?

Vujon, in Newcastle’s Queen Street, has attempted to square the circle by offering dishes that name-check a number of India’s regions - here a lamb from Kashmir, there a Pondicheery pheasant - and yet, also, there’s our old fake friend chicken tikka masala, ready to be ordered with vast jugs of Cobra, a beer as authentically Indian as Burton on Trent.

The chef is from West Bengal, the state that shares a border with Bangladesh and whose capital Kolkata was one of bases of the East India Company, and which I still call Calcutta out of obstinacy and because I spent two of the best months of my life there. I remember the cooking as if it were yesterday, and I remember their sweets best of all. I was looking forward to dessert.

I’d been to Vujon many years ago, in the mid-1990s. I wasn’t impressed. It had a reputation as the best curry house in the City. It wasn’t, by a mile. It was overblown, expensive and the food was muddy. That is, nothing tasted fresh and there was certainly nothing exciting or original on the predictable menu.

It was also sitting next to Rasa, which really is the best curry house in the City. By a mile. So since then I thought there was no reason to go to Vujon, even to review it. Let those who don’t know go there, and I’ll stick with Rasa, with its wonderful Keralan fish and vegetables, or Haveli in Darras Hall.

But I’ve been missing a trick. Vujon has transformed. Best of all, according to their website, they have modernised their menu. Poppadoms and chutney were still straight out of the regular textbook, but the three starters we shared had more distinction. 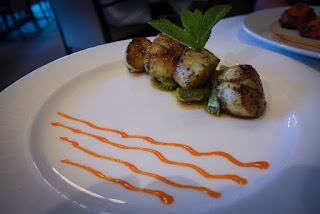 Best was a scallop dish in which the lightly seared creatures were paired with fragrant fennel and star anise, and served on a lightly dressed grape and orange salad. Under £7 for four scallops is impressive value for such nimble cooking. 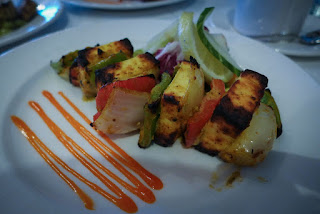 Achari paneer boasted some unusually creamy and deliciously charred chunks of cheese, but the accompanying peppers and onions were jarringly undercooked. The whole thing was coated in a moreish pickle/spice mix. Don’t you hate the word ‘moreish’? But that’s what Indian cooking does for me. I just can’t stop picking at those bowls sitting in the centre when the food is fresh and the spicing balanced.

Clay oven-cooked chicken had been marinated in yogurt, garlic and a complex mix of spices in which chilli heat was given centre billing. That was moreish too. 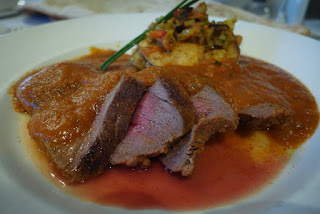 I decided to try out their “modernising” by ordering Jaipur-style venison from the “contemporary” section. The maharajahs of Rajasthan loved their game. This was delicately spiced with cinnamon and clove before being cooked to a tender medium rare. A shame then that the accompanying “tomato and chilli jam” clobbered the subtle flavour of the deer into submission with a mean cayenne fist. Is that the modern bit? 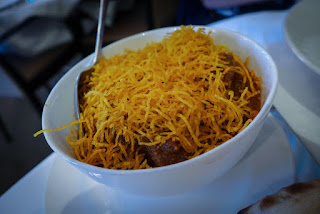 No such issues with a Parsi dish of Ghosht Salli Jardaloo. Tender lamb was anointed by a gravy of depth, clarity and complexity. Apricot provided a fruity counterpoint to the rich meat, while clove and, I think, Indian long pepper contributed sing-song top notes which kept calling us back for another forkful.

Proving the theory that the most humble plates can be elevated to zenith-level given the right treatment was an equally delicious dhal. Lentils, mung beans and chickpeas were cooked down with fresh coriander and what, given how astonishingly rich the thing was, I assumed to be a generous dose of ghee.

“I never thought dhal to be as good as this”, Mrs Diner, ripping another piece of naan from the blanket that took up about half the table.

A pilau didn’t offend, but struggled in such illustrious company. I enjoyed Begun, an aubergine side dish in which restrained spicing let the hard-fried vegetables flavour shine through. This could have come from the streets of Calcutta.

Not so the wine – we chose a rather nondescript French sauvignon blanc from a list that would benefit from the inclusion of an Indian wine or two. Now that would have been modern.

Sadly, that’s where the fun pretty much stopped. The jaggery, rossogollas and sondesh I had hoped our Bengali chef might have prepared were nowhere to be seen.

My pistachio kulfi was at least the right shape, but lacked the caramel notes and chewy texture I’d expected.

Mrs Diner’s chocolate and cherry cake was ordered more in hope than expectation. It tasted of frozen economy. These desserts are little more than an afterthought, quite out of kilter with the quality of the main event. 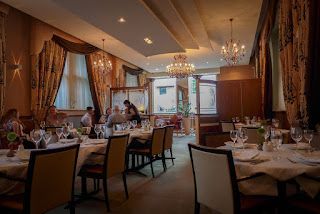 Vujon was refurbished around a year ago and still has the restaurant equivalent of that new car smell. It feels like the kind of muted but plush dining room you’d expect to find in a decent hotel. Chandeliers, tablecloths and a thick carpet seal the deal. We were very well looked after by the charming and knowledgeable staff.

Our bill for two came to just under £80, which is significantly more than your average balti, though we overordered to absurdity in order to try more dishes. £25-30 per head would do right by all but the most gluttonous.

The last Indian meal I wrote about was at the excellent Zyka in Hexham. The chef there is the cousin of Mahtab Miah, who owns Vujon, and indeed used to cook here too. The meal we enjoyed at Vujon was of similar quality. A few mis-steps were more than compensated by some serious dishes, full of the depth of flavour that comes when skill, time, and freshly roasted spices are the main ingredients. Maybe not up to the level of Haveli and Rasa, but close.

Email ThisBlogThis!Share to TwitterShare to FacebookShare to Pinterest
Location: Newcastle upon Tyne, Tyne and Wear, UK