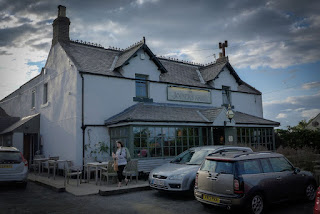 
One member of our family absolutely adores The Joiner’s Arms.

He discovered it a few years ago, shortly after it opened, after a long run on the beach at Embleton. There’s nothing finer, after a Northumbrian beach romp, than rinsing off your sandy tongue in a big bowl of water under a pub table laden with fish and chips. Those chips never fall far from the table when Diner Dog’s around.

If they gave stars for pooch-friendliness, this place would have five. They even welcome dogs into its 5 star bedrooms. But The Joiner’s Arms has greater claims than being a dog-loving pub serving excellent fish and chips: it also calls itself a gastropub. You can’t judge a gastropub by fish and chips alone; it took us a while to get round to it, but on a warmish Summer evening we returned for a proper test.


The Joiners Arms is owned by Apartment Group, the organisation responsible for some of those indescribable venues down what is ironically called Newcastle’s Diamond Strip. They have names like Nancy’s Bordello. I don’t know who Nancy is, but I’m guessing her bordello is the spiritual home of Geordie Shore. Which makes the group’s ownership of The Joiner’s Arms, about a mile from another, far more attractive shore, all the more remarkable. 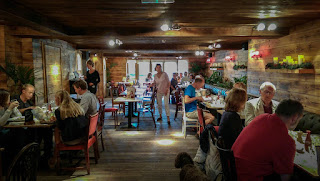 A large, pine-panelled space, set at the back of this “Gastropub and 5 star luxury inn”, the place was buzzing with a generally well-heeled (and definitely not high-heeled) multi-generational clientele. Even on a Tuesday night the place was packed, and several dogs had joined the party.

“They must be doing something right here,” remarked Mrs Diner as we settled in.

Huge portions of fish and chips were being ferried across the floor – they still looked very good.

The menu offers gussied-up versions of pub staples - pies, steaks, sausages etc. - alongside some more intriguing dishes and ingredients. There are all the usual noises about local ingredients and suppliers on the menu, of course. I don’t know a single restaurant in Northumberland today that doesn’t advertise local ingredients well prepared.

My starter of smoked local white and shell fish chowder was billed as 'world famous'. Either I’m not getting out enough or I suspect this might not be entirely accurate. Either way, this was actually a very fine bowlful in which smoked haddock and mussels mingled with leeks and spuds in a delicate but hearty velouté. 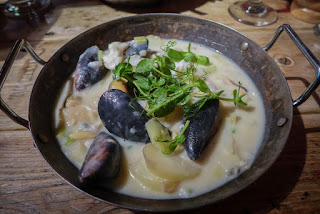 I admired the accuracy of the cooking; the fish not overdone, the potatoes yielding and the leeks, still full of tang, providing some textural contrast. The accompanying bread was decent too – I was quite impressed. 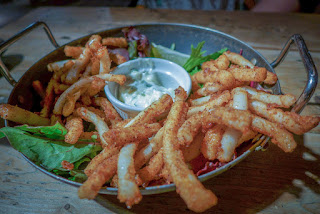 The promise of Sichuan pepper had been enough to make Mrs Diner order a squid starter. This aromatic spice has wonderfully addictive tingly-numbing properties. Unfortunately those properties were entirely absent from the large portion that arrived. As a result, the dish was extremely dull, scarcely enlivened by an underpowered garlic and sea salt aioli. If you’re going to promise fireworks, you have to remember to light the blue touch paper. Some interesting leaves appeared as garnish, like baby chard and sorrel, but these were gritty, not having been properly washed. Eating soil as a result of a slapdash kitchen is not my idea of fun.

However this crime was as nothing compared to the burger murder that followed. The menu promised a brioche bun; what arrived was a floury bap. 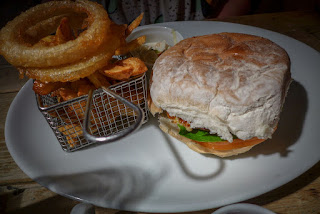 Inside was worse: a joyless puck of such desperate ineptitude I had to take a second taste to be sure. The texture was tight, gristly and dry, while the flavour had the sort of boiled meat notes that recalled the catering vans outside football stadia. The Joiner’s slaw that accompanied it was a slack and watery aberration. I guessed it had been made by a joiner, rather than a chef.

“This is actually disgusting,” came the verdict, as Mrs Diner admitted defeat after just a couple of mouthfuls.

She asked me how a kitchen responsible for such excellent chowder could also sling out such a grim dud. I had a strong suspicion, and sought confirmation from the menu. Sure enough, no sign of the words 'home made' or even 'The Joiner’s own'. Now I’m not saying that this kitchen doesn’t make its own burgers, but if they do, they might want to consider why they don’t taste like it. And if they don’t, they should quickly find another supplier. 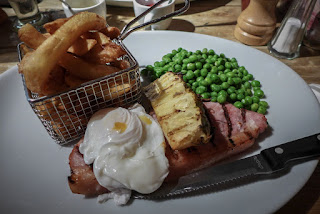 By comparison, I guess my gammon could be called a triumph, though all things are relative. In the credit column, the same good chips, and a wodge of juicy fresh grilled pineapple. However, the ham tasted cheap, all salt and no porky depth, while its poached egg, which was the only sauce the dish offered, was overcooked. 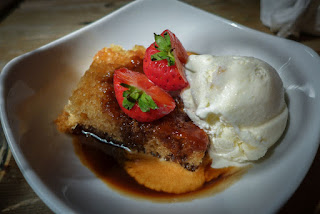 Although we dined at half past seven, by the time were ready to order desserts half the menu had run out. We shared a portion of sticky marmalade cake with cinder toffee sauce. It was a light sponge bathed in a powerfully sweet sauce, providing a satisfactory coda to a disappointing performance.

I’m guessing that the kitchen had taken on more than it could cope with that night. Tuesdays are notoriously quiet, but the joint was heaving. Staff were harried and hard to locate. But that’s no excuse for the cooking. This was a Jekyll and Hyde experience in which a meal of some real promise reared a rather ugly burger-shaped head.

This was essentially pub grub at a premium price. The awful burger was £11.95; my gammon was £14.00, yet tasted little better than I’d expect at a Wetherspoons. At these prices I really do want local ingredients, well prepared.

The Joiner’s Arms isn’t really a gastropub at all, it’s an ordinary pub that likes dogs and does very good fish and chips – and seafood chowder. And it’s still the best place to wash the sand off your tongue after a beachy romp.