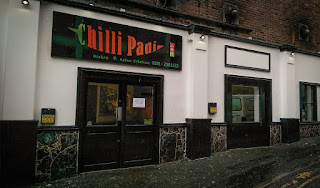 
At the risk of over-generalising, I’d say that Newcastle’s Asian restaurants could be divided into two categories.

The first, and largest group, serves up a grim cornucopia of Anglo-Sino standards in which any one of four or five protein ingredients can be draped in any of twenty interchangeable sauces, each tasting much like the last. Newcastle’s Stowell Street is the ground zero of this disastrous cuisine.

The second category is a bit more interesting. The menu, if in English, is likely to have similar gloop-centric offerings, with perhaps a few more interesting dishes. But this is only half the story, for if you look closely, or ask, there are actually two menus. However, unless you’re Chinese, you’ll be spared the one with all the interesting stuff - dangly bits of animals, steamboat soups, punishing quantities of chilli and sichuan pepper, that type of thing.

Is it because Asian restaurateurs think we Westerners are gentle creatures who can’t take the heat? Are they worried about our reaction when served meat with a bit of bone attached? Or is this just a cunning culinary revenge for England’s role in the Opium Wars? Let’s deny them the really good dishes, and let them think that sweet and sour chicken is real Chinese food.

Either way, it has to stop. This is a matter of diplomatic significance: I’ve had enough beef in black bean sauce to last a lifetime. Bring me the proper stuff.

If you agree, then I have good news for you. Chilli Padi only has one menu. There is a “western” section which neither you, nor I, need pay any attention to whatsoever. The rest of it is chock full of the kind of dishes I’ve longed to see served in Newcastle, by turns comforting, intriguing and arresting. And all cooked really well. 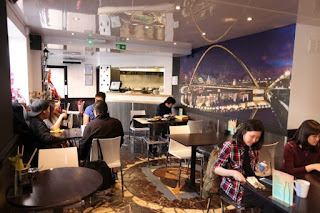 Aside from a big mural of the Millennium Bridge, this is very much a no frills kind of place, with laminated menus and plastic chairs. You walk past the cramped kitchen in which wok burners roar like jet engines. It’s more tiny café than restaurant, but no matter, we’re made to feel welcome straight away.

The menu is a megamix of Chinese and southeast Asian cooking. There are two chefs, one from China, the other Malaysia. The owner is a young Malayasian pharmacist called Florence Lao. I’m guessing she wanted to be reminded of her homeland. Her manager is from Malaysia too. Apparently he has his mother send out ingredients. 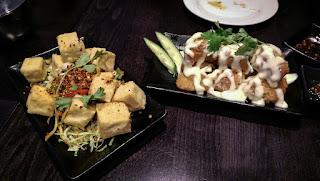 To get us underway, we order some deep fried starters. Salt and chilli beancurd is perfect, crisp exterior giving way to a soft, milkily bland interior. The cubes of tofu are scattered with a chilli flake and scallion mix that is, like culinary S&M, both punishing and addictive.

‘Salad You Tiaw’ has nothing to do with salad, but consists of sensational crunchy-fried donuts, stuffed with bouncy sweet prawns, covered in mayonnaise. You Tiao translates as “oil-fried devil”, but these weren’t devilish at all, they were heavenly, even though deep-fried donuts topped with mayonnaise are probably pretty evil. Our waiter proudly noted that this is the only place in town serving them. Shame – they were wonderful. 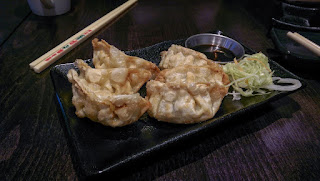 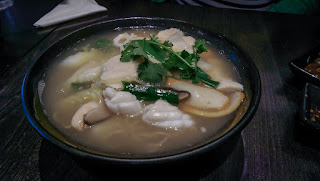 Mrs Diner’s main course was a steaming bowl of the House special noodle soup. Tender curls of squid, moist pieces of chicken and more excellently cooked prawns lurked in a cloudy broth. That broth could cure just about anything: Malaysian penicillin, brewed with fresh stock.

I sipped iced coffee, for there’s no booze licence, and then tried my beef rendang. 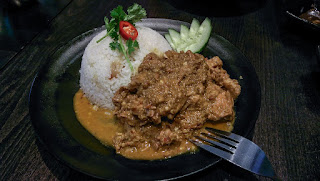 Just as a single sip of tea and a few crumbs of madeleine cake transported Proust’s narrator back to childhood memories of his Aunt Léonie; one taste of this beef rendang conveyed me instantly to the back streets of George Town on Penang Island. In a tiny café in Newcastle, I’d found as authentic an Asian dish as I could ever want: beef and caramelised shallot packed with deep flavour, the gravy bursting with lemongrass, galangal and ginger top-notes.

The accompanying rice was no afterthought either, with coconut milk and ginger rendering it rich and delicious. 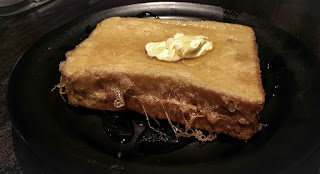 Our waiter apologised for the absence of a dessert menu, pointing out the tiny kitchen. No matter, for Mrs Diner had spotted French toast among the snack options. This deep-fried (again) peanut butter sandwich, doused in syrup, did the trick.

I have rarely eaten so well for the princely sum of £20 per head, although. as they don’t take credit cards, I needed a quick trip to the Tesco cashpoint outside. In case you think I’ve taken leave of my critical faculties, not all was flawless. Mrs Diner’s broth was supposed to include duck, but I couldn't find any, and perhaps the rendang could have been cooked longer to gain even more richness.

However, what we ate that night was so far in advance of most of the competition (indeed, all the competition, apart from Hei Hei’s knock-em-dead Chinese mainland food), that I’m certainly not complaining.

I shall return, because I want to try their roti canai, their congee and their fish head claypot. I want to get on first name terms with their ma po tofu and the Sichuan sliced poached fish. For those who are concerned about such things, Chilli Padi has five stars for hygiene, and, joy, they also do takeaway.

We left, in appropriately monsoon conditions, to a warm farewell from all the staff. The service was excellent, with everyone exuding pride in what they are serving. Rightly – for at last I think I’ve found my go-to place in Newcastle for proper South East Asian food. I suggest you try it out and see if I’ve also found yours.