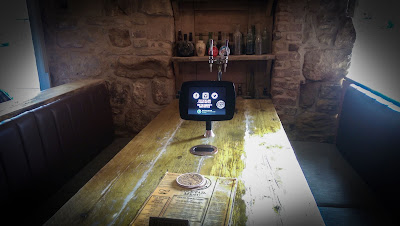 
Of all the places where I might have expected to find a vision of the future of dining, Alnwick wouldn’t have been anywhere near the top of the list.

Don’t get me wrong, I like the town a lot. When the weather is fine, The Gardens are a lovely way to spend an afternoon. When inclemency strikes, many a happy hour can be whittled away amongst the aged tomes of Barter Books. But groundbreaking? Not the Alnwick I know.

I’ve always thought of it as a genteel, antiquated kind of place, stuck somewhere in the 1950s; it’s the last place on earth you’d expect to find a hi-tech gadget-filled eatery. So when I heard rumours of a pub that had introduced “iPad self-service ordering booths” and a craft beer “tasting wall”, I was intrigued. What does it feel like to ask for food from a screen rather than a person? Does it improve the quality? Reduce the price? I had to find out. 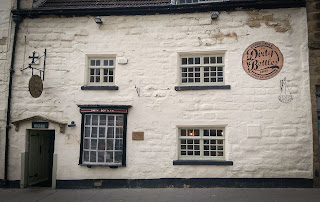 The Dirty Bottles was reborn last year from Ye Olde Cross, a pub with a curse. Behind an ancient window was a collection of dusty bottles. Alnwick folklore has it that a former owner tried to move them nearly two centuries ago and promptly dropped down dead. Since when, the bottles have got dustier and dirtier, until the restored pub took on their name last year.

The new owner is Mark Jones, owner of Zecca in Amble, and although he hasn’t dared move those dirty bottles, he has paid some attention, and not a little cash, to the design of the interior. Walls and tables were hewn from natural-looking, lightly treated wood, punctuated by darkly grouted white tiles and (but of course!) filament lightbulbs.

We settled into our own iPad self-service ordering booth. In the middle of its table sat a touch screen that swiveled in order to allow all five of us access to its digital embrace. We settled in and immediately began tapping and swiping away at our new electronic companion; also mounted on the table were a pair of beer taps. A human waitress “activated” us and we were off. 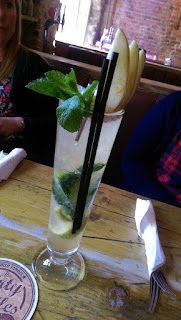 So, does it work? Yeah, sort of. Like the plugged-in technophiles that we are, we vigorously ordered ourselves a range of drinks and dishes from across the vast menu. When beverages started appearing it felt a bit like magic. Or like working in Starbucks.

We did, however, encounter a few glitches. Our touch screen hadn’t been programmed to understand why anyone would ever want a whole pint of lime and soda, so our pal had to order two halves, which of course arrived together.

Mrs Diner struggled gamely to substitute out some fries for a salad, but the computer was having none of it. When, in despair, I pressed the “call a waitress” button, it felt like we’d all failed.

So much for the tech — how was the food? Truth be told: not particularly great. The good part first: they at least know what they’re doing with a deep-fat fryer.

A starter of potato skins were crisp, as were some sweet potato fries that accompanied my main.

A portion of chilli cheese fries involved some really quite good chilli that spoke of a properly unrushed cooking time.

Mrs Diner’s starter of prawns in chilli and garlic were enjoyable, if somewhat less revolutionary than the method of their ordering. 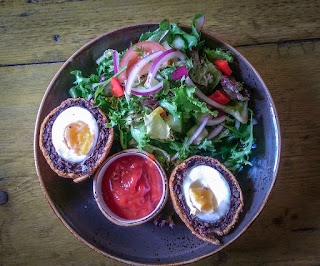 Elsewhere, however, lurked some serious clangers. A Scotch egg was overcooked — the non-oozy yolk took me straight back to the pre-Broad Chare era of the 1990s. This mistake may once have passed without comment, but times have moved on; nowadays it’s a crime. As is charging £6.75 for said item, alongside some boringly underdressed salad. The Broad Chare (Newcastle) Scotch egg is less than half this price and more than twice as good. 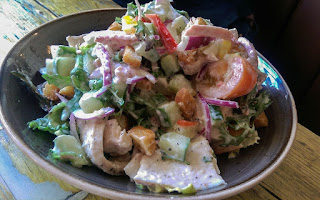 Meanwhile, a chicken Caesar salad turned out to be nothing of the sort. Since when did a Caesar salad contain red peppers, tomatoes and red onions, but no discernible anchovy or parmesan? Never, that’s when. Try as I might, I couldn’t find a “take it back” button on the iPad. 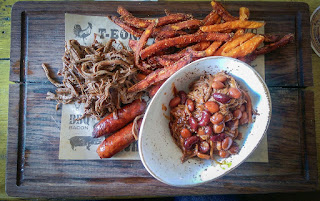 Mains were mostly poor. My own, a two meats and two sides board from the smokehouse, featured desperately poor sausages and dreary brisket. The latter had been pulled into strands rather than being served in pink-tinged slices. Pit beans were better, at least having proper smokiness and some tang in the sauce. 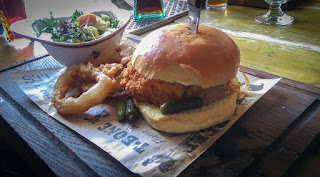 Elsewhere a chicken burger was dry and thick — it hadn’t been pounded out at all. Chicken wings were just as arid. 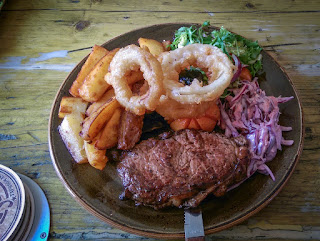 Mrs Diner’s sirloin was edible, although it possessed that slightly boiled note that comes from average beef, averagely cooked. It lacked char and proper seasoning. 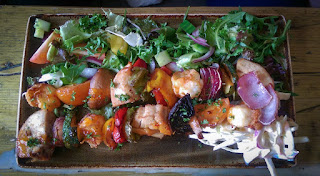 Best of the mains bunch were kebabs of prawns and chicken. Dull, but not bad for a pub in Alnwick.

Whatever the food lacked in quality, it made up for in volume. Portions were enormous. However, as much as I never enjoy returning uneaten animal to the kitchen — it seems such a waste of a life — here there was no option: eating much of it just wasn’t very pleasurable. 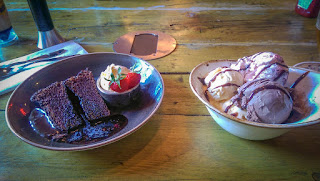 Neither was the one dessert that we tried. The website claims that all the food is prepared fresh on site. Either the word “prepared” is doing rather a lot of work in that sentence, or they need a new recipe for chocolate fudge cake. It wasn’t just dull, it was yawn-making, a mind-numbing waste of time, lacking any hint of competence or thwack of good cocoa. A selection of ice-creams was better, although this resulted from good shopping rather than cooking, as it had come from the local Morwick dairy. 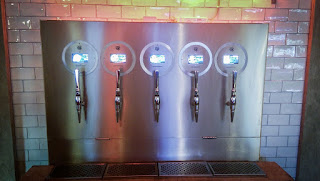 Beers were, once we had acquired a card, dispensed from a self-service “tasting wall”. This is actually quite a good idea. The machine charges you for the actual amount you consume, which can be as little as you want. So you could taste the lot, before committing to a pint. A shame then that the libations on offer were a couple of Brewdog standards and Blue Moon, which are fine, but widely available in local supermarkets.

The technology almost caused total carnage at the dessert stage of proceedings as we somehow managed to order ten of each. Thankfully there was a sensible human on hand to recognise the error. Service, for that matter, was good, although in theory there shouldn’t have been much need for any.

And that, I think, cuts to the heart of the issue; are these machines serving us, or vice versa? A lot of science fiction pits us against them in some kind of dystopian struggle for existence, but perhaps the reality will be rather more banal. Maybe in the future we will all just be eating ridiculous quantities of ice cream and really bad chocolate fudge cake so as not to offend our new digital overlords. A terrifying thought. 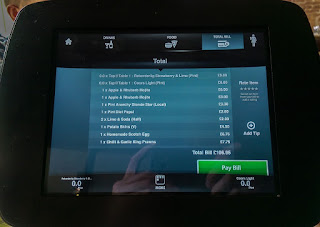 I can now relate in a whole new way to the lyrics of one of my favourite Leonard Cohen songs. As he sang, some years ago, “I’ve seen the future, brother: it is murder”.