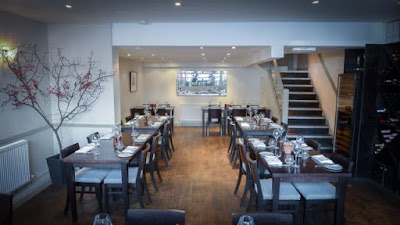 There is something wonderfully defiant and old-fashioned about a restaurant with a proper cheeseboard.


To me, it shows that the place really cares for its produce (maintaining a good cheese board is both a science and a labour of love); it forces front of house staff to really swat up on the subject (you can’t just invent the names on the board – well, you could, but one day you’ll be caught out by a real fromage-fancier); above all, it offers customers like me a serious treat at the end of the meal, a journey of adventure with unexpected flavour bombs enroute. 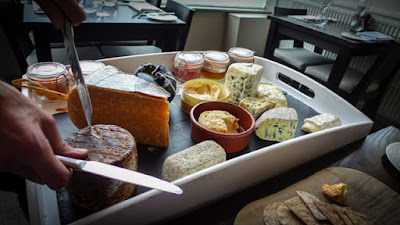 As an unreformed cheese addict who finds himself rather underserved in our region, this board was the first thing I spotted as we sat down to dinner at Truffle in Darlington. I took it as a very good sign indeed. I was mostly right.
This was a meal of much charm, with several attractive plates bringing together ingredients that really enjoyed each other’s company. More of which in a moment. But first: the cheese. Oh, the cheese! 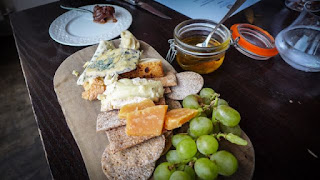 Is there a finer culinary combination than chalky-white goats’ cheese and truffle honey? Is there anything more delicious than the pig-sty funk of a good Époisses, or the saline creaminess of a punchy Roquefort? Surely not.

Our waiter cut us hunks of all these and more, plated up with fresh grapes, superb crackers and a fine chutney. He left the jar of truffle honey on the table, an act of generosity we both greedily abused. A cheese course like this is all too rare, but a pleasure for which I am willing to forgive flaws elsewhere. Chapeau!

I’m afraid there were some to forgive. My dessert, a pistachio sponge with an ice cream of the same, certainly looked the part but was rather dry and lacking in flavour. 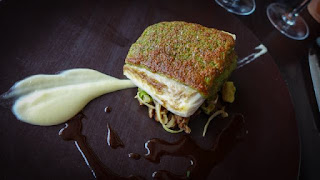 Earlier, a piece of halibut was rather tragically overcooked to the texture of tinned tuna. I had ordered it to find out how its crust of Beaufort, a powerful alpine cheese of the Savoie region, would work. I have a feeling this may be Phil Howard ‘s recipe from The Square, complete with leeks and artichoke pureé. Perhaps in his Michelin-starred hands this combination would make sense; here it really didn’t. 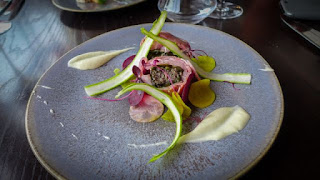 This, however, was the only instance of ingredient-clash. Earlier, my starter of rabbit ballotine featured meat that was cooked so delicately as to have me wondering for a moment whether it had been cooked at all. It came with a silken purée of Jerusalem artichoke and was stuffed with very nifty mushroom duxelles, lifted with some flash-pickled wafers of raw beets and mandolined raw asparagus. A dish of technique and temperament. 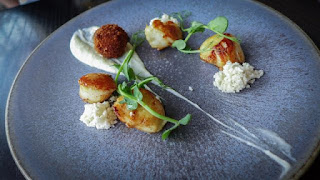 Mrs Diner jealously guarded her own starter, and with good reason. Small but perfectly cooked scallops - creamy within but caramelised without - were paired with a breaded nugget of good black pudding and some judiciously truffled cauliflower “couscous”. 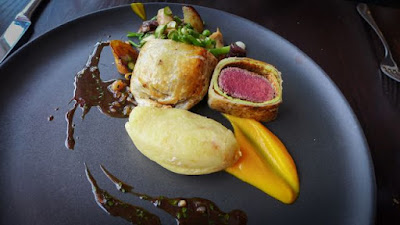 Her main course was a winner too: a properly made - crèpe and all - Wellington of quite delicious pink venison matched to a hearty blob of horseradish mash and a little (actually, too little) rich Bordelaise sauce. In case you haven’t sussed it yet, this is a North East restaurant that has its boots firmly embedded in French soil.

The reduced sauces, the classic, complex, time-consuming preparations: these all demand a sound knowledge of the kind of techniques that have come down from Carême, Escoffier et al. To find them in this bit of Darlington, opposite a defunct sex shop and just down from the grot-house of a pub where we took a pre-dinner sharpener, was more than a pleasant surprise.

The room is an airy, chandeliered affair. A commendation is also due for the plates on which everything arrived: they were various, but uniformly lovely. Service from the two waiters was slightly harried at first, but then they relaxed almost as much as we did, as they successfully matched wines to each of our dishes. Six each of red and white were available by the glass, which seems a very civilised number. I particularly enjoyed the choice of the usually more seafood-friendly Picpoul with my rabbit and the tannin-free softness of a Merlot-Carignan blend for the cheese.

The fine English sparkler Nyetimber and a time-mellowed glass of the Macallan 18 were delightfully refreshing book-ends to a most enjoyable meal. This is a drinks list with some clout.

We managed to run up a fair bill by enjoying it all a little too much. We had ordered from the à la carte menu (mains are around £20), but there is an excellent value early bird menu of three courses for £22.

The people of Darlington aren’t exactly starved of good restaurants. To the south are Rockcliffe Hall’s transformed Orangery and Hurworth’s excellent gastropub The Bay Horse, and of course, just a few minutes to the north is the unmissable Raby Hunt, with possibly the best cooking in the whole of our region.

But don’t overlook, as I did for far too long, this little gem of a place on Grange Road. It’s certainly worth a visit. Just make sure that, whatever else you do, you order the cheese.