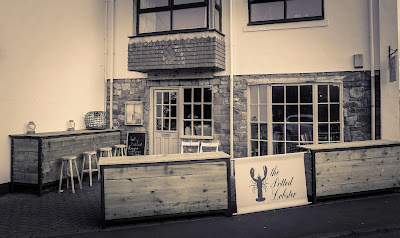 
Amongst the rugged gorgeousness of the Northumberland coast, few sights are so singularly impressive as that towering heap of a castle at Bamburgh. 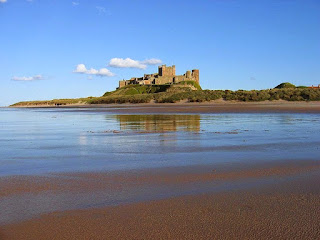 Visible from miles around, there are no prizes for guessing why such an imposing site was chosen as a seat of power of the Angles, Bernicians and those other Northern powerhouses. When I take friends from the South around our region, Bamburgh is one place I particularly enjoy showing off, although until recently it wasn’t somewhere I’d consider taking them for a meal. A cheese sandwich on the beach was always the best bet.

Then, a couple years ago, I discovered, enjoyed and recommended The Mizen Head. Now I think I’ve found somewhere even better.


Richard Sim is a chef on a journey north. After various stints in Newcastle, he opened The Old Boat House in Amble with Martin Charlton. That was an excellent venue when I last visited, but I can’t vouch for it now, because Sim, who’s a really good cook, has sold his stake and moved his spatulas up the coast.

As Mrs Diner and I would find out over the course of a sold-out Saturday evening, this is very much to the benefit of the people, and visitors, of Bamburgh. After a day spent on the world’s finest beach (I say this without fear of any dissent from this readership) and even taking a refreshingly swift dip in the gelid waves, which is always a shock to the system, I was very much in the mood for devouring as many of the sea’s inhabitants as Sim’s menu would allow. His menu allowed, and how. 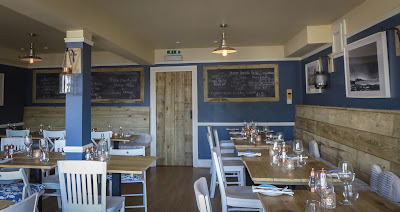 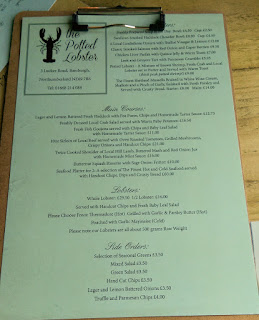 Across the printed list and specials boards I counted twelve different maritime delights. Equally encouraging were their sensibly sounding preparations. Good seafood is a wonderful but fleeting product. I hate it when a kitchen buggers about with it. Fresh fish deserves restrained, tasteful cooking. 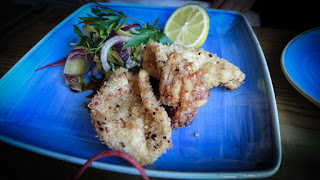 Mrs Diner’s starter of salt chilli squid was as daringly exotic as things got all night. It was a rebuttal of all the half-arsed versions of salt chilli squid everyone is subjected to these days. This was bouncy and toothsome yet nowhere close to rubbery, while the crumb was a gorgeously crisp panko-type affair. An Asian sauce, based, I think, around plums, was a gloop-free delight. 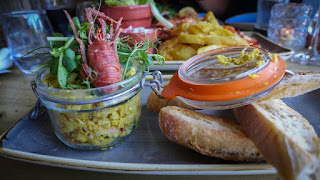 My own starter was the potted lobster itself, like posh potted shrimps. There was no doubting the quality of the crab, lobster and shrimp in the mix, but it didn’t quite match the squid. The seasoning needed dialling up a notch or two for my taste, and a freer hand with the mace would have done no harm either. I appreciated the edible garnish of whole crayfish that glared accusingly at me from its Kilner jar perch. 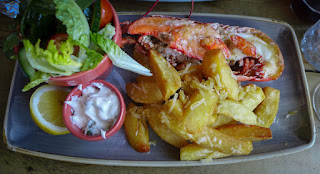 We also shared half a lobster with our starters because… well, just because. Anointed by garlic butter and then grilled, this beast, plucked recently from the waters around either Seahouses or Amble, had superb flavour. The tail was a bit tough, hinting at a pre-boiling that may have lasted just a touch long, but the claw meat was joy itself, as were all those nuggets of meat that hide in the legs, and that brownish goo that lives behind the head.

Equal parts meal and anatomy lesson, this is one of life's luxuries that is well worth the £16 entry fee. Not so the truffle that was supposed to be adorning the lobster’s accompanying chips. It had either gone entirely AWOL or was so faint as to have been drowned out by potato and parmesan. 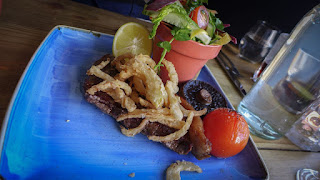 It isn’t every day you can follow lobster with steak and this, for Mrs Diner at least, was one of those rare occasions. It was certainly rare, an aggressively seasoned hunk of sirloin cooked to red perfection, with a decent amount of Maillard effect on its outside too. 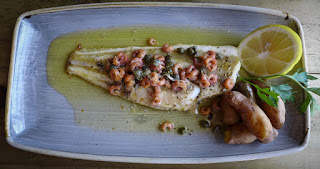 My own main, selected from the chalkboard of specials, was an exemplar of all that restraint and taste I was banging on about before. A whole plaice had spent the exact amount of time in a hot oven required to allow the milky flesh to peel seductively away from the bone. Brown shrimp had drowned in lashings of a butter sauce that had taken on just a hint of nuttiness, while the thwack of capers prevented the whole thing getting too damn rich. As I mashed the last new potato into that sauce, I mourned its passing much as I would that of a dear friend. 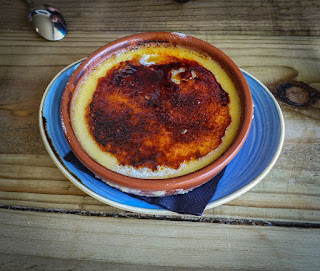 Puddings were ordered out of duty to the cause of food journalism, rather than from actual hunger, but they were good. And massive. 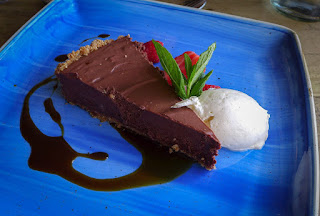 I think we may have been given a family size crème brûlée, and the chocolate delice was scarcely any smaller. We battered through them, as one does, finishing the last spoonfuls in order to confirm that: yes, Sim can cook a good pudding too.

Only two white wines were available by the glass. Happily one of these was Picpoul de Pinet which tends to do very nicely with all manner of seafood. This one was unusually tropical, but did the job nicely. Offering a larger choice by the glass would be a sound manoeuvre.

Service was sufficient, if a bit nervous. I never did find out where they get their bread from, despite my best attempts. Our bill topped out at just under £90, which is not cheap, but neither is good fish. Or the talent to cook it properly.

In the graveyard just round the corner from The Potted Lobster lie the earthly remains of Grace Darling. I doubt Richard Sim will ever attain sufficient fame to merit his own museum in this village. But if he stays, and I hope he does (there’s almost nowhere further north to go in Northumberland, unless he moves to Belford or Berwick), he might earn himself at least a blue plaque for bringing Bamburgh some really excellent cooking. That, for me, is quite heroic enough.