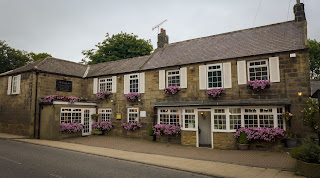 
When can a pub legitimately call itself a gastropub? Is it when it starts offering roasted cauliflower and panfried kale as side dishes instead of boiled carrots and broccoli? Is it when food tourists outnumber the locals in the public bar? Or, as in the case of The Granby Inn, is it when your young chef comes home with a North East Chef of the Year award?


That’s what recently happened to this handsome lump of old coaching inn in Longframlington. It has been in the Hall family for 40 years. It’s probably always served solid, reliable pubby grub. But now the son of the family, Michael, goes off and wins this gong, beating chefs from smarter restaurants all over the region. So I suspect they now have a conundrum: how do you hook in a vibey new foodie crowd, eager to try out Michael’s cooking, without hacking off the regulars who really just want the steak and chips you’ve been serving them for years?

I suspect food pilgrims, attracted by news of Mr Hall's success, might expect more than the usual pub fare; after all, the website promises ‘fine dining for the knowledgeable food enthusiast’.

“I guess that includes you and me,” I said to Mrs Diner, as we zoomed there from Newcastle on a Friday evening. Or attempted to.

These days it’s hard to zoom anywhere on a Friday, particularly north on the A1. The planes roaring towards the airport runway seemed to be mocking us as we tailgated our way towards Morpeth. Fortunately, once the traffic clears, Longframlington is just about close enough to the city to make an evening trip doable. And, set as it is amongst the gently undulating splendour of Northumberland, it’s far enough away to feel that wonderful change of pace, if only for a few hours. 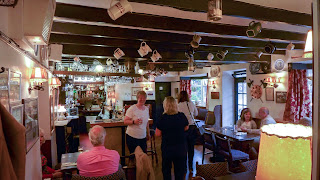 The building is farmhouse stone, made prettier by white shutters and a whole festoonery of summer blooms. Inside was a rather more prosaic affair, the beamed ceiling being liberally punctuated with ageing objets de pub: Bell’s Whisky water jugs, a hunting horn, polished but unblown. The furniture and furnishings didn’t appear to have been updated this century – maybe not even the last. Messrs Farrow and Ball certainly haven’t reached this gastropub yet, while filament lightbulbs are but a distant rumour.

None of this is meant to sound condescending; actually it was reassuring, and helped us unwind from the journey. We particularly loved the welcome, which, coming from members of a family who have owned and run the place for decades, was warm and genuine.

There was an à la carte menu with starters at the six quid mark and mains between twelve and eighteen. A separate “pub favourites” section did what it said on the tin, while a selection from the à la carte was also available as a set menu of three courses for £19.95. For a smallish kitchen, this was an awful lot of food to choose from, and therein lies a rather thorny issue: The Granby is essentially cooking two menus.

For those who know what they like and like what they know, there were steaks (sauce Diane, obviously), scampi & chips or a steak & ale pie. On the other hand, for the travelling gastronauts there was stone bass with orange braised fennel, or cured and torched mackerel. It’s admirable to attempt all this, but can it all be made to work without anyone getting hurt? 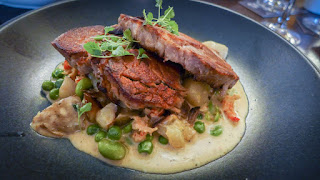 Almost. My collar of pork main course was excellent; the marbling of the cut kept it perfectly succulent despite a long slow cook followed by a crisping in a hot pan. It perched on a fricassee of nubile broad beans, peas and - my only quibble - slightly rubbery crayfish tails, in a moat of decent cream sauce.

For some reason Mrs Diner went all trad on me and plumped for cod and chips.

“Sometimes I just want fish and chips on a Friday night, is that alright?” she grumped, readying the tomato ketchup. Fine. Happily, the fish was excellent, sporting a batter that could easily have come from the fryer of a chippy rather than a pub or restaurant. This, in case you’re not sure, is a compliment. 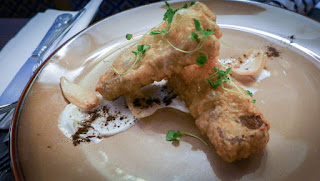 Other dishes brought the old and new worlds together with some success. Corned beef fritters had a tremendous bovine depth, arriving on a swish of horseradish mayo that told of a chef who cares about plating, and some fine pickled shallots. 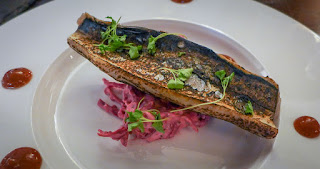 Elsewhere, though, I detected the strain of a kitchen trying to be all things to all diners. I don’t know how many portions of the cured and torched mackerel they shift, but mine hadn’t so much been cured as reincarnated, having an odd, pappy texture, and tasting old fashioned burnt rather than new-wave charred. A shame, as the gooseberry ketchup that supported it was a triumph. 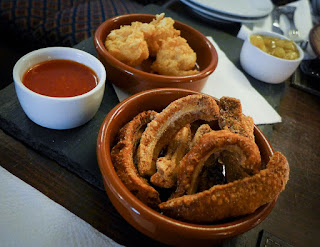 Home-made pork scratchings were decent specimens but, whether by accident or design, their apple sauce tasted exactly like the guts of a Mr Kipling apple pie.

My main course, despite having some lovely heritage potatoes on the plate, came with a side of completely undressed and unseasoned boiled-to-smithereens veg. Why? It almost felt like a dirty protest from a chef who can, and would like to, do so much more. 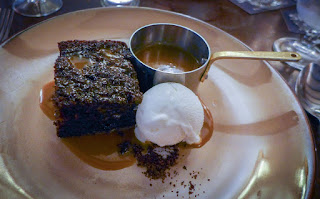 There was no split personality when it came to puddings, a straightforward selection of all that is sweet, tried and true. Both the sticky toffee pudding and the Eton mess that we put away were fine examples, the chewy meringue on the latter being a particular treat.

Service was charming throughout, and refreshingly devoid of the trained-in patter and up-selling of city centre multis. Have I visited too many chain restaurants of late? Certainly – Newcastle is filling up with the wretched things.

The Granby Inn might like to acquire some more interesting wine by the glass though. The three whites available were the all-too predictable snorefest of Chardonnay, Sauvignon Blanc and Pinot Grigio. Ho-hum.

For once I wasn’t the oldest person there. Not by a long way. All around us steaks were being ordered (not too rare please) to go with pints of dull beer. Is this a problem for a young, ambitious chef? Who knows.

For our part, we enjoyed our meal in a welcoming and friendly establishment, but I can’t in good faith dish out as many stars as Michael Hall, or his new-found status, might expect.

Nonetheless I’d encourage you to visit, and perhaps even to help out through the power of your pound. Order anything that sounds a bit unusual or interesting, or perhaps something from the specials board. The fewer checks for steak that this clearly capable kitchen receives, the better they’ll be able to concentrate on turning out more characterful cookery for the rest of us.