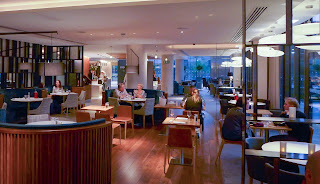 
Which is more important: the food or the service? It’s an age-old conundrum. My own usual answer is a cop-out: it depends.

For the most part, I’m on Team Food. Good service is a real skill, of course, and one not frequently taught in our country. However, for me an excellent dish normally trumps a dodgy server. A good waiter is a bit like the ref at the Tyne-Wear derby: if you don’t notice him too much then he’s probably had a decent game.

And so to Hawthorns, the bistro offering at the still-shiny Crowne Plaza Hotel behind Central Station. You might be thinking that my preamble about service doesn’t auger well for the waiting staff there: well, I’m afraid you’re right on the money.


Like Stephen Hawking, let us first consider the nature of Time. On a Friday evening, having exchanged the company of work colleagues for that of good friends, my own is unusually valuable. I was looking forward very much to dinner, but also to going on with them elsewhere for a nightcap or three.

However, as time drew on, the first started chewing unfairly into the second. It took our table of four just shy of three hours to put away a modest three-course meal, without any extensions caused by coffee or liqueurs. We are not slow eaters; this was way too long.

Getting hold of a waiter or waitress was a real trick. I like to think of myself as having a bit of a knack for this, but the staff in Hawthorns seemed quite oblivious to my best efforts, speeding past the table without so much as a glance in our direction.

There was much worse: an item was added to our bill which we had neither ordered nor consumed; the menu boasted that Hawthorns offers “whatever you want, whenever you want it”, but “whatever you want” apparently doesn’t include the £20 set menu because we weren’t offered it; we were told they had things available which they hadn’t.

The staff seemed nervous, harried, or both. Dessert plates were long gone by the time I gave up waiting for the bill, and wearily headed over to the front desk to negotiate my own exit strategy. Sigh.

Yes, yes, but what about the food?

Well, here more nuance is required, for it was something of a puzzle. Credit is certainly due to Executive Chef Chris Wood for packing some excellent regional produce into his menu. Doddington cheese, Craster kippers, Yorkshire rhubarb, OCC coffee – they were all present and correct. There were even a few outbreaks of cooking that did them justice too. 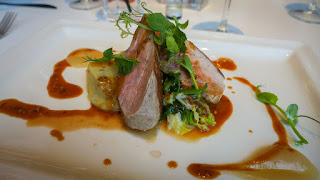 My rare breed pork fillet was bang on, the darkness of the meat hinting at its quality, while the nicely browned crust and mere suggestion of pinky innards betrayed a chef with good timing. 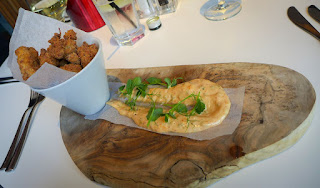 A starter of popcorn rabbit was an excellent use of bunny, the meat retaining some spring (or, rather, hop), while the crisped cajun-spiced coating rewarded repeat attention.

And that’s not all. The veggie in our midst happily dispatched a starter of mac and cheese bon bon’s (that’s the restaurant’s apostrophe, Lord have mercy!), which were the shape of Minecraft blocks, before declaring the pasta on some goats cheese tortellini to be satisfyingly well made. 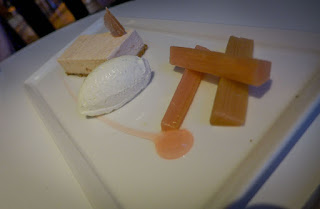 And yet elsewhere lurked grave trouble. Puddings were, to be charitable about it, budget. Some strange crime, possibly involving the wrong amount of gelatine, had been committed on that rhubarb, with the resulting cheesecake having an eye-openingly unpleasant texture. 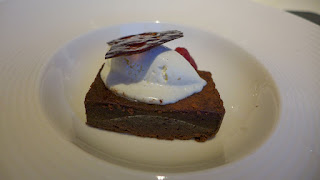 My chocolate brownie was the kind you’d be polite about if a colleague brought it into work and, unacceptably, it arrived on a plate that was covered in grimy marks as if the dishwasher had stopped halfway through. This mistake shouldn’t have got past the kitchen porter, never mind the chef or the waiter. 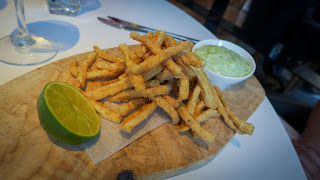 I could talk a bit about the squid, which had been fried to a texture one notch shy of an elastic band, or the deeply average steak sandwich; however I really want to tell you about the fish pie. 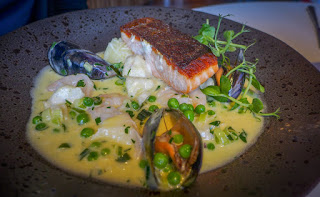 Except I can’t, because we didn’t get one, despite what the menu promised. Whatever a pie may or may not be - and, again, this could be a conversation that rages long and hard - in no sick world is a salmon fillet in a cream sauce studded with potatoes and mussels a fish pie. It. Just. Ain’t.

The dish was actually quite nice, but when you say the word pie you’ve entered into a contract with me. I asked our waitress where the pie element of the dish had gotten to. I didn’t catch the whole reply, but I think it included the word “deconstructed”. Double sigh.

Our meal came in at forty pounds per head, including moderate booze consumption and a tip that was paid out of duty rather than with any hint of enthusiasm. The wine list has some decent entries, including an enjoyable Picpoul, but it started in the low £20s before accelerating rapidly north. At these prices, the vintages should absolutely be displayed. They absolutely weren’t.

I had a sneaking feeling that the whole point of Hawthorns isn’t to attract people who care about things like value for money or good service, or even people who really care about their food. It appears to be about attracting a crowd who are going to eat out somewhere or other, so it might as well be here, what with all that nice talk of regional produce and what have you.

Judging from the cyberchat, they do have an impressive blogger-freebie outreach programme. I wonder how many of those “writers” who’ve apparently enjoyed their free meals “as ever, all my own opinions (see disclosure policy)” have returned under the wind of their own dollar?

I might be bang wrong about all this, and the experience that we had might be unrepresentative. However, sat in this soulless airport-like space and listening to a well meaning but not terribly good chap filling the chasm-like gaps between courses by strumming out a few Coldplay hits, I’m afraid that it didn’t feel like it.